With geysers, grizzlies, an impressive grand canyon, and great mud pools, Yellowstone National Park in America’s west is dramatic, imposing and at times overwhelming. The world’s first national park, established in 1872, is a wonderful blend of land, water, forest, grassland, wildlife and geothermal features. It challenges your senses and stirs your soul. 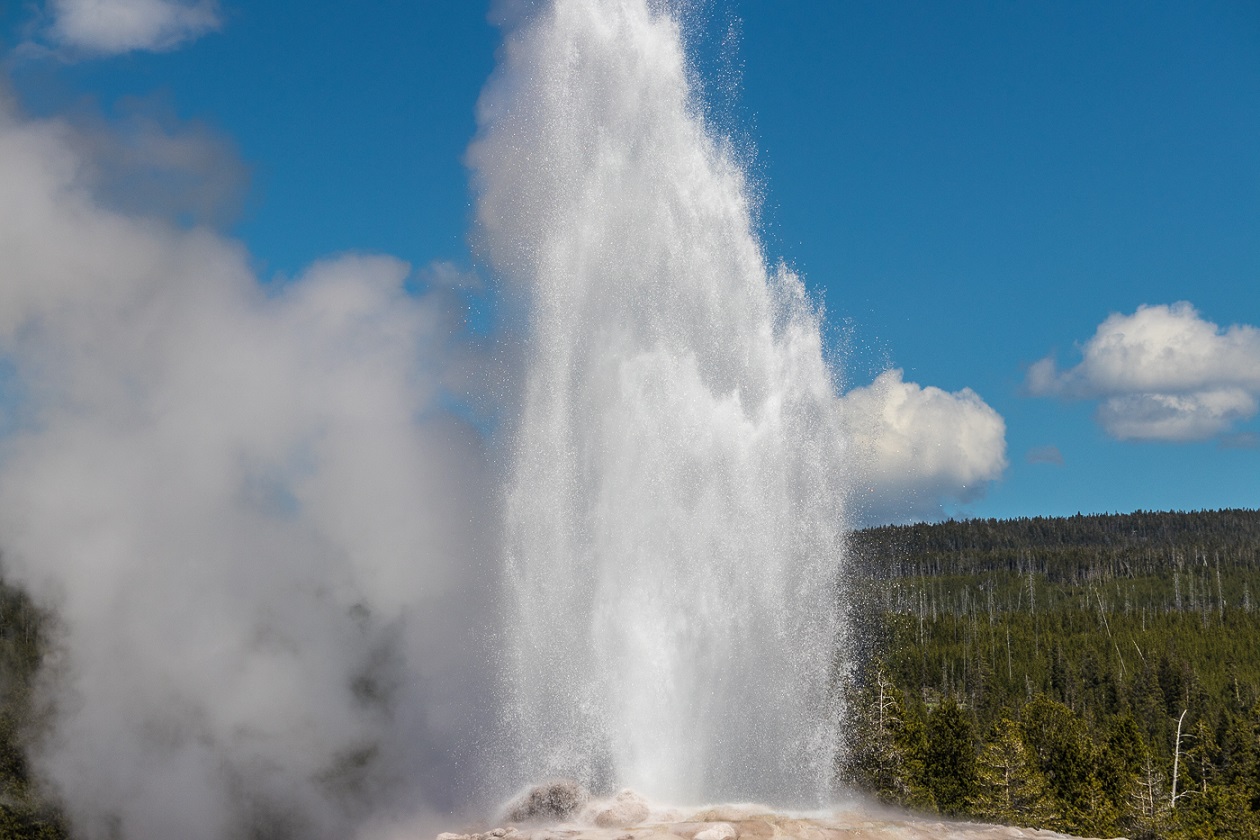 The first expedition to reach here returned with accounts that were rebuffed by magazine editors and politicians who said their accounts were too far-fetched to be believed. Writers need to be careful even today. Fortunately, images and video readily available on our screens confirm todays words.

Yellowstone is in Wyoming with small parts spilling over into Montana and Idaho. Heat and volcanic activity from the depths of Earth power this dramatic landscape which is visited by over four million visitors each year. In 1978, Yellowstone was named a UNESCO World Heritage Site.

Visitor numbers vary wildly throughout the year from an average of 14,000 in November to 950,000 in July. 95% of visits are made from May to October so you should plan accordingly. At the peak time, the park can seem very crowded at the most popular spots and local accommodation becomes difficult to find. At present about 17 per cent of visitors come from outside the United States.

There are several different approaches that feed into the Grand Loop Road, a figure-eight highway in the middle of the park. Rather than a single focus, Yellowstone has several hubs so travelling around is essential. Most visitors do this by car but various tours are available which visit most areas. During my recent visit, I thought these were some of the park highlights.

A highlight here is Old Faithful Inn, a masterpiece of national park rustic architecture, with the lobby containing a massive stone fireplace and soaring timber ceiling. Just outside, Old Faithfull Geyser erupts around 17 times per day to an average height of 40 metres. Wait on the wooden boardwalk built around the geyser and watch it erupt with your camera in hand. With its reliable eruption times it’s easy to plan a visit to witness a blowout.

Afterwards, the Old Faithful Visitor Education Centre explains the geology behind the world’s most famous geyser. Visitors can then easily hike the Upper Geyser Basin, home to around 60 percent of the world’s geysers.

Further north is the Norris Geyser Basin, where geological wonders like Artist Paint Pots, Roaring Mountain, and Steamboat Geyser are complemented by the indoor exhibits of two museums. Visitors can also explore the eerie Norris-Canyon Blowdown with its ghost trees, or fly fish for trout in the swift-flowing Gibson River. 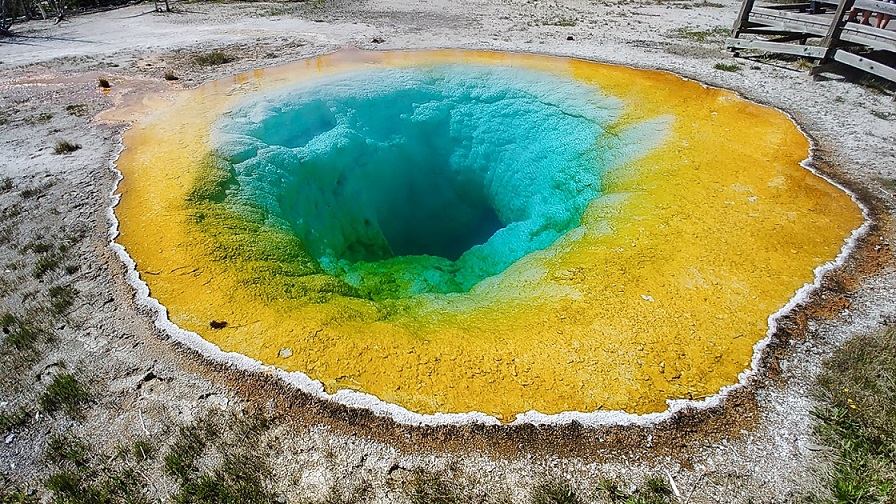 Yellowstone’s largest hot spring, is in the Midway Geyser Basin and is accessible by boardwalk. It is a large turquoise pool ringed with orange and yellow with steam coming off the surface. Temperatures around the pool are high, especially during the summer. The rainbow colours are best viewed from a height so take a slightly strenuous hike up the Midway Bluff trail for the perfect vantage point.

Grand Canyon of the Yellowstone

This is an immense multicoloured trench that stretches 38 kilometres and rises as much as 360 metres above the Yellowstone River. Trails lead to outstanding viewpoints like Artist’s Point on the south rim and Lookout Point on the north rim, for great views of the 100-metre-high Lower Yellowstone Falls. The canyon is marked by steep white-and-yellow cliffs and its vents and spires reveal thermal activity that continues unabated underground. 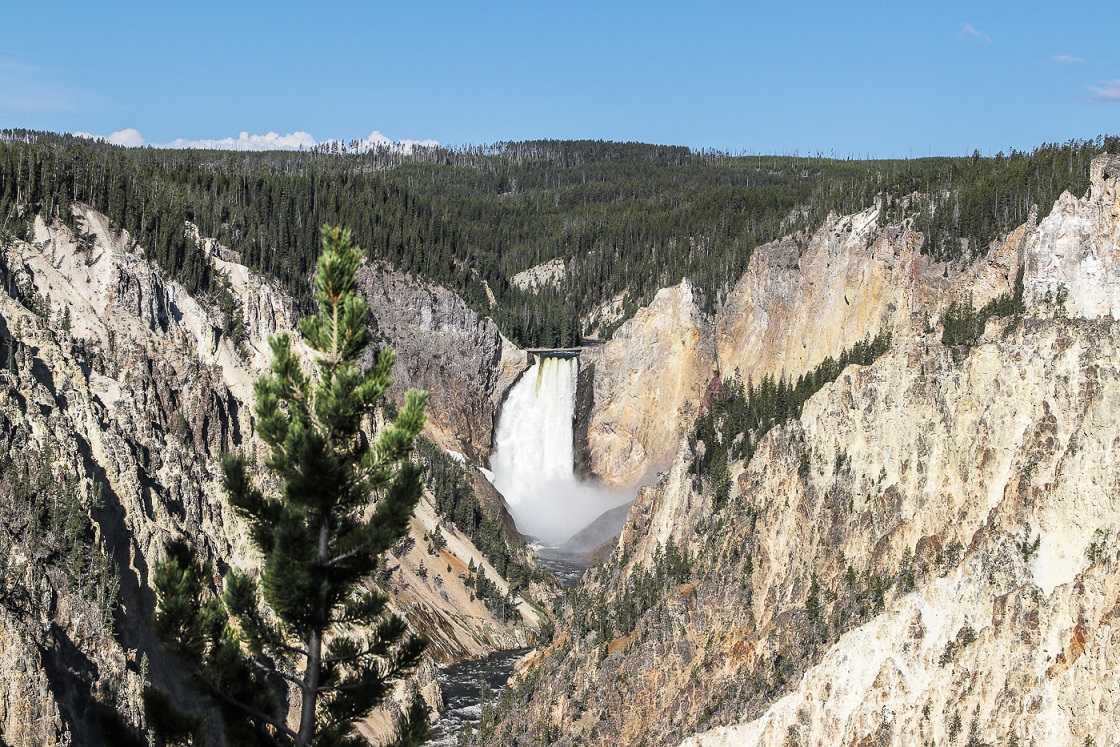 The largest high-altitude lake in North America offers the park’s best opportunities for boating, fishing, and waterfront camping but it is too cold for swimming. There are rental boats, guided fishing charters, and scenic lake cruises, as well as shuttle services to remote campsites along the 141-mile lakeshore.

This is the best place in Yellowstone to get a glimpse of the wolves that have been reintroduced to the park. Bison and elk also frequent the valley with its lush grasslands.

Here and elsewhere there is abundant wildlife, including elk, bison, grizzlies, black bear, pronghorn antelope, moose, and bighorn sheep. March and April are the best months to view bear, while the winter months are best for wolves and bighorn sheep. Elk, moose, bison, and mountain goats can be spotted during the summer months.

You are guaranteed to see bison. The park’s herd dwindled to just 23 animals during the late 19th century, but the population later bounced back thanks to more effective protection and now totals roughly 5,500.

Surrounded by mountain towns immediately to the north, east, and west, and bordered by Grand Teton National Park to the south, there is plenty to do not only within, but also around the park.

These hotels provide accommodation in the park. Old Faithful Inn is the world’s largest log structure with restaurants, bars and shop. Lake Yellowstone Hotel with its Greek Revival facade is the park’s oldest hotel overlooking the lake. Mammoth Hot Springs Hotel is a classic motor lodge with motel-style rooms and cabins, restaurant, shop, and map room.

The park has 12 developed campgrounds, including Mammoth, Canyon, and Grant Village.

Most roads in the park are closed to vehicles in winter but visitors can travel through the park in snowcoaches or on snowmobiles with an authorized guide. Roads inside Yellowstone National Park begin to open for the summer season in late April but are not completely open until the end of May, depending on the weather.