With its mountain backdrop, interesting museums, urban beaches and wonderful Stanley Park, beautiful Vancouver is one of my favourite cities in the world. The city will appeal to all ages and budget levels with its accommodation, restaurant, shopping and theatre/museum offerings. Fortunately, it has recently opened up again after the pandemic.

It was four years since I last visited so I recently took the opportunity to reacquaint myself with many of the things that make the city so appealing to visitors. Amazingly, most were free.

We start at harbourside Canada Place with its unusual roof. This is part cruise ship terminal, part convention centre and hotel, and part hub for sightseeing tours. The walkway provides wonderful panoramic views across to North Vancouver.

Robson Street is several blocks south of Canada Place. This is best known as a shopping centre but it is also the setting for many activities, particularly in Robson Square. This is where you find the Vancouver Art Gallery with its excellent collection of paintings. It’s housed in the former provincial courthouse and its exterior has been used in many films and TV shows.

An oasis of peace and calm in the busy city is found in Vancouver’s oldest surviving church, 125-year-old Christ Church Cathedral. The interior has been completely renovated and the woodwork, the stained-glass windows, the organ, and the altar are all stunning.

This is the oldest part of the city and in recent times it has been gentrified with restaurants, galleries and shops set in carefully restored Victorian buildings. Cobblestone streets and iron lampposts help give the district a distinct atmosphere.

It is named after an early resident and a statue in Maple Leaf Square is a popular place for photos. So too is the nearby steam clock which uses steam to whistle and shoot steam from its five whistles in its version of the Westminster Chime every 15 minutes. On the hour it also gives a toot from each whistle. 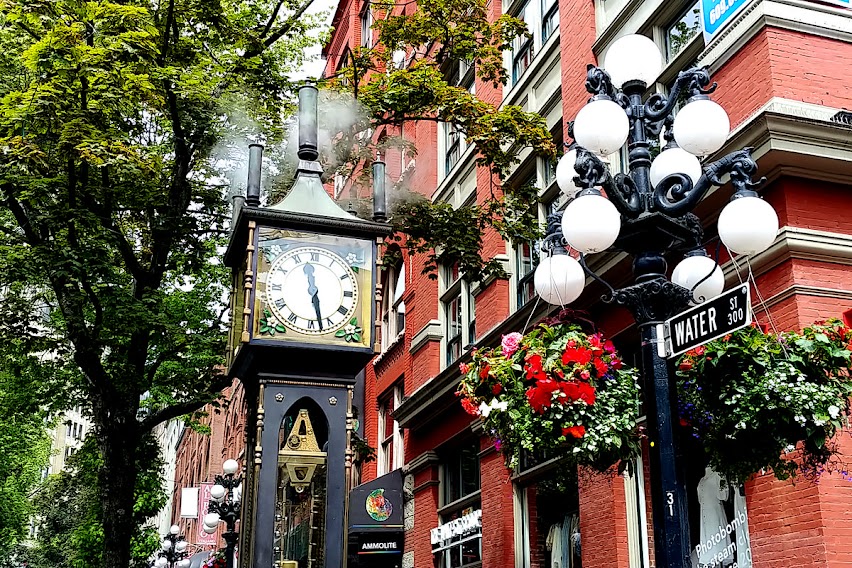 Beyond the ornate entrance gate, interesting Chinatown is a mixture of the old and new. This area was once quite seedy and remnants of that can still be seen but it is safe to walk in daylight hours. A highlight is the pretty walled Dr Sun Yat-Sen Classical Garden which is modelled after a traditional garden from the Ming Dynasty. This has a C$16 admission fee but the adjacent Dr Sun Yat-Sen Park has some similar elements and is free. 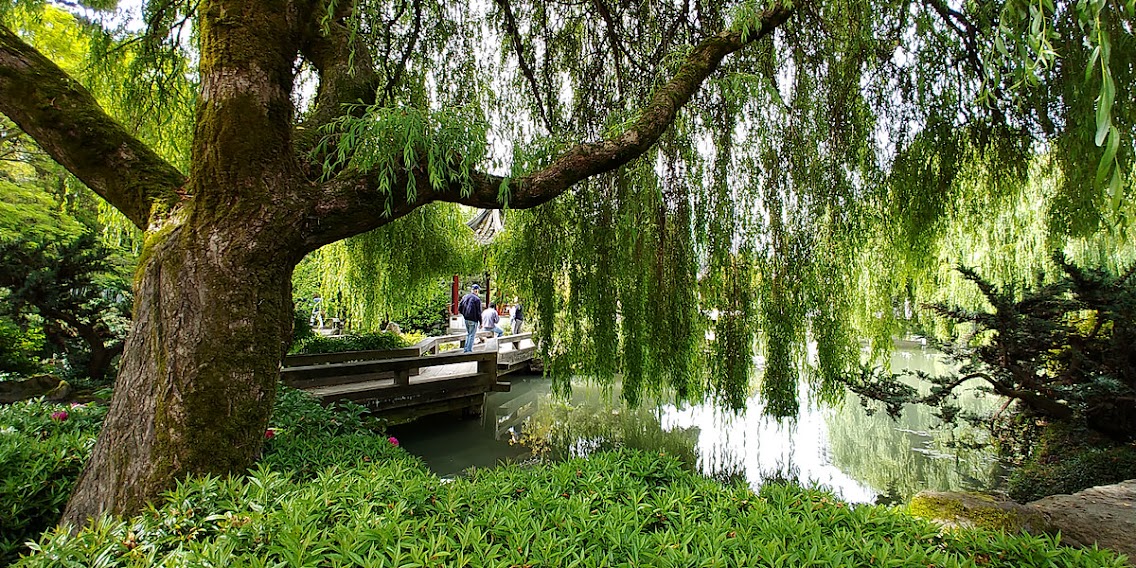 Just south of here, BC Place is called Western Canada’s premier venue for live events and sports. It has a retractable roof which makes it suitable for events in all weathers, and it hosts the BC Sports Hall of Fame.

Once mainly industrial, Granville Island is now a thriving social place with a relaxed atmosphere. You see it best at the Granville Island Public Market which sells fruit vegetables, seafood, drinks, and ready-to-eat items. Aside from delightful food products, this is home to dozens of artisans crafting jewelry, handmade soaps, preserves, candles and more. We love it.

The adjacent area has seen artists and retailers move into converted warehouses alongside theatres, galleries and restaurants. Close by, you can rest your feet and grab a table in the tasting room of the Granville Island Brewing Co. You can even join one of their daily tours and see the manufacturing process. Alternatively, take a walk over to Rodgers’ Chocolate which serves up chocolates using 19th-century recipes.

Small ferries connect the island to the downtown area, and houseboats and pleasure craft crowd the small harbour.

We walked from Granville Island, past some of the city’s prettiest apartments to Kits Point. This is the location of several interesting museums. The Museum of Vancouver is the largest civic museum in Canada. It features displays on the natural, cultural, and human history of the Vancouver region. It shares its iconic domed building with the H.R. MacMillan Space Centre, which is part space and science museum, part planetarium, and part observatory.

Nearby, is the fascinating Vancouver Maritime Museum which tells the story of the Pacific Northwest maritime history. Its main exhibition is St. Roch which was the first vessel to sail the Northwestern Passage from west to east and was also the first vessel to circumvent North America.

This is one of the city’s loveliest and busiest beaches but it was far too cold to swim when we visited. Fortunately, it is also a place to walk, bike or roller skate and there are public art installations, shopping and high-end restaurants. On sunny days it is a great place to listen to beach musicians, rent a boat, kyak or see the Laughing Men statues, a wonderful, light-hearted piece of public art. 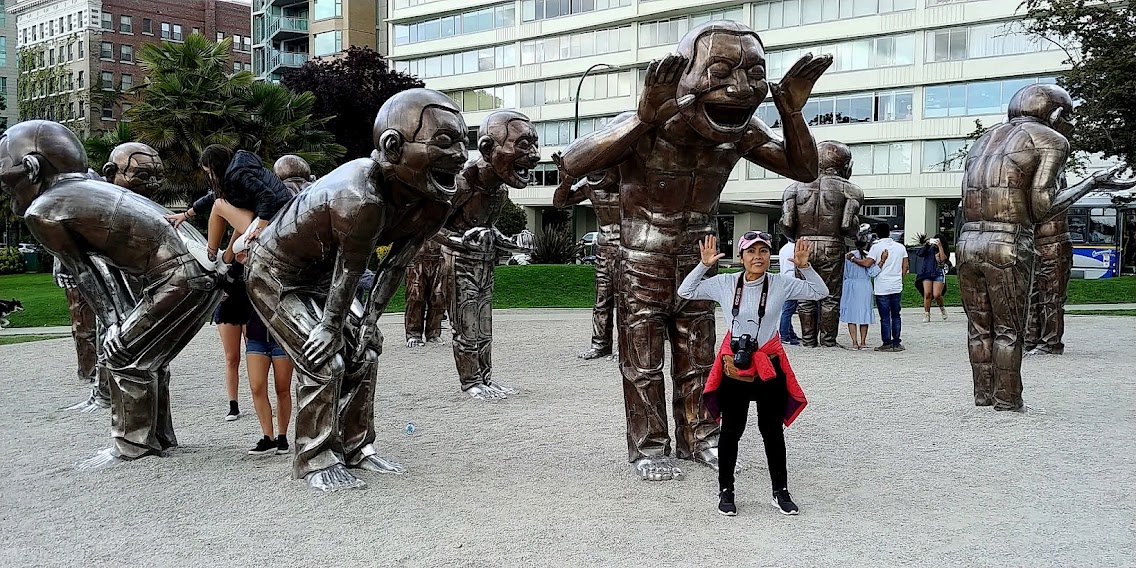 The place really buzzes for three nights in summer when crowds watch three nights of fireworks set to music as part of the Celebration of Light festival. The fireworks blast off at 10:00 pm each night, but there is also live music and other activities starting in the early afternoon.

This large, lush park has been named the World’s Best Park by Trip Advisor. Eight million people visit here each year to walk the 8-kilometre paved seawall path that encircles the green space or visit other specific attractions like the totem poles at Brockton Point, the Vancouver Aquarium, and a miniature train.

You can explore on foot, rent a bicycle from one of several outlets in Denman Street or take a slow horse-drawn tour. The one-hour tour departs about every 30 minutes, stops at the totem poles for photographs then goes by the famous Girl in a Wetsuit Statue and the Empress of Japan Figurehead. The ride continues on the north side of Stanley Park with views towards North Vancouver and the Lions Gate Bridge before returning to the stay point. Don’t miss it.

A lovely waterfront pathway leads back to the city. On the way you see several up-market hotels, numerous boat harbours, the seaplane terminal and some of the city’s famed flowers.

The driverless YVR Airport Skytrain is the most convenient way to get from the international airport to the downtown area. Buses and the Seabus provide good transport around the city.