I have to say it was an appalling flight but the only way was up after that.  All the more so as the rain was approaching biblical proportions when we landed. Fortunately the skies cleared soon afterwards on the Friday afternoon and the weather was set fair for the weekend.

Having been quoted forty euros for a taxi to Paphos for what I believed to be a 15km journey, I quickly sought alternative arrangements and was somewhat relieved to find out that the bus to the harbour area cost only 1.50 Euros and the trip was a more than acceptable half an hour. The central bus station at the harbour could not be easier to navigate with everything in English and even staff on hand to provide assistance. I was at my hotel, a further 5 minute bus ride in next to no time. 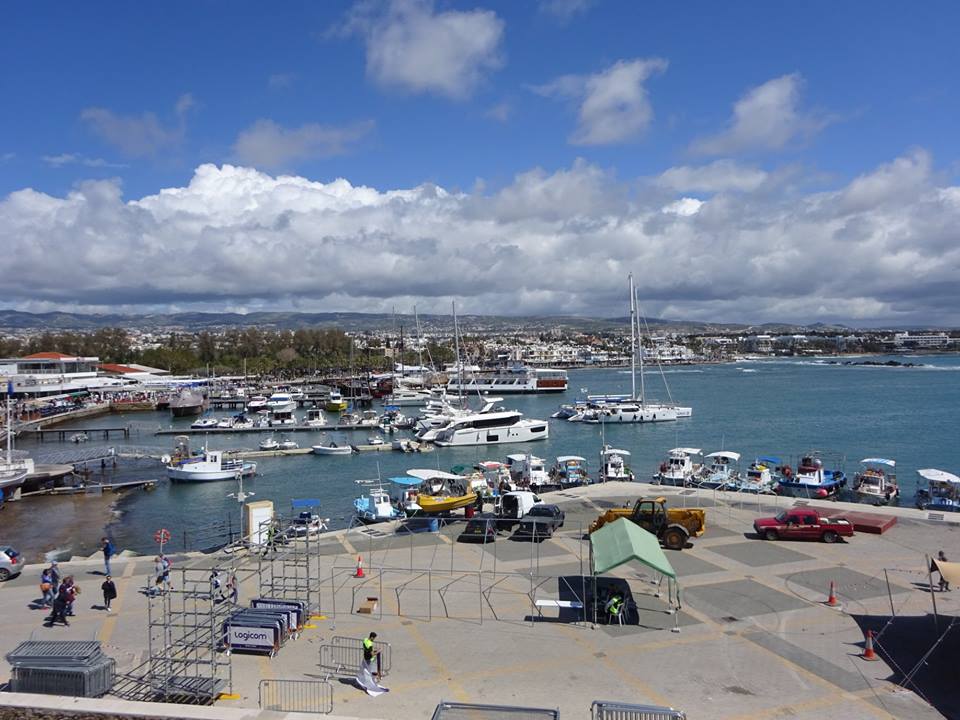 I quickly noticed a few little idiosyncrasies about Cypriot hospitality  – namely that it is excellent. Little things such as the hotel manager advising me to buy a bottle of water at the shop rather than his bar where it would be much more expensive and secondly typing my card details manually into the card machine to take payment as he had noticed it was my last try on the pin number. This was further accentuated as waiting staff seemed genuinely interested in why you were in Cyprus, for how long and so on. The little things make a real difference. Indeed they could perhaps be forgiven, given the numerous British ex pats in the region (there is a village just outside of Paphos known locally as little Britain such is the scale of the epidemic) to be less welcoming but quite the opposite was true.

With even some local storekeepers hailing from “little Britain” and the dominance of English tourists of a certain generation it is therefore not surprising to see numerous pubs with Sky Sports and an equal number of offers for Full English Breakfasts. And there is certainly a market for it – said pubs were relatively busy seemingly throughout the day – a phenomena which I found a little strange. That said, the food, especially local delicacies such as the sumptuous lamb kleftiko, moussaka and Cypriot kebabs is nothing short of fantastic.

I was in Paphos on a four day break to run the Cyprus Marathon on the Sunday. I spent a couple of days sightseeing either side of this. 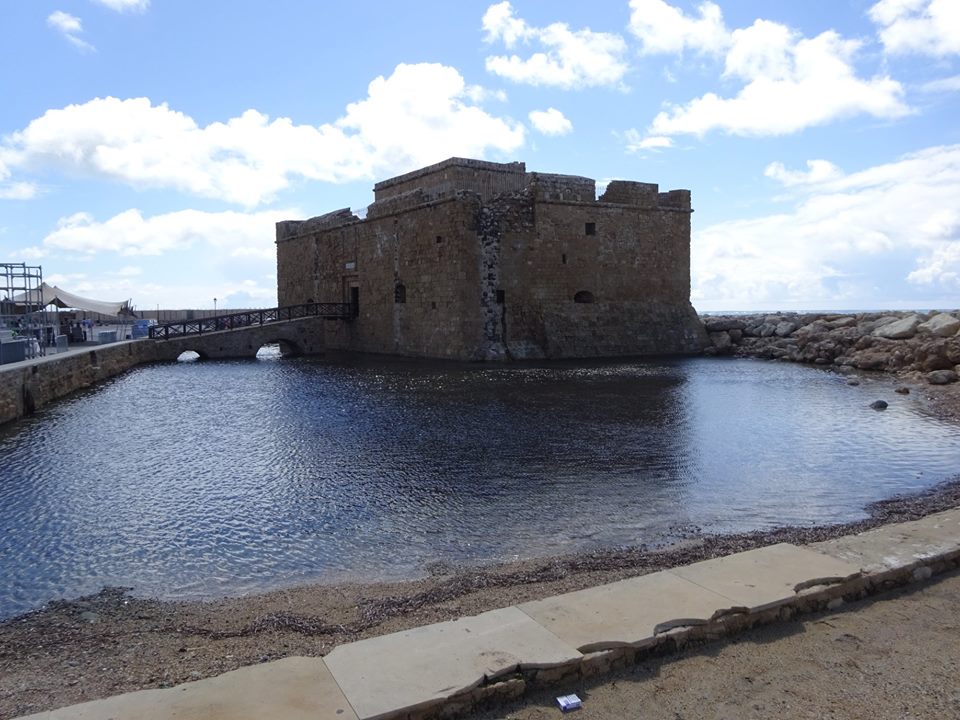 Paphos Castle dates back to the Byzantine Period and was initially built as a fort to protect the harbour. It was destroyed by an earthquake in 1222 but restored by the Ottomans in the late 16th Century. It has seen many uses ranging from a prison to a residence for dignitaries. Today the roof serves as a viewing point for photographs of the harbour area. The main area on the ground floor contains interesting information and pictures describing the wild and marine life of the region as well as local geology. Both the government and residents of the region face challenges in terms of preserving its richness as a nature reserve; while also considering the economic growth of the area in terms of (for example) road building as well as other activities such as walking and camping.

The main draw of the harbour area is the vast Archaeological Park, situated literally a stone’s through from the Castle. The area which at times one is not quite sure where it stops and what constitutes an archaeological site (I would suggest not venturing too much further out than the lighthouse) is also rich in bird and wildlife and is UNESCO listed. 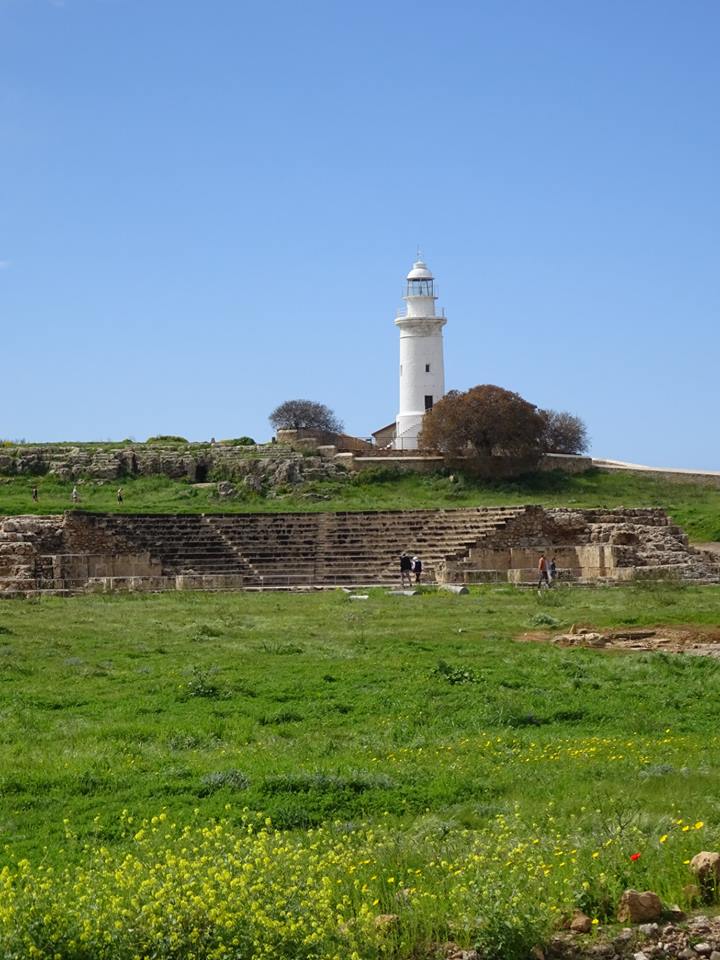 The park’s sights and monuments incorporate the prehistoric as well as Roman and Hellenistic Periods right through to the Middle Ages. The pick of the sights that one should spend several hours navigating is the House of Dionysos which houses a collection of incredible mosaics dating from around the 2nd Century AD, for the most part in excellent condition.  The House of Theseus contained my personal favourite as below. I would suggest that even none archaeology and history buffs would take something from strolling around this prodigiously large area and its extensive range of monuments that also includes four Roman Villas. 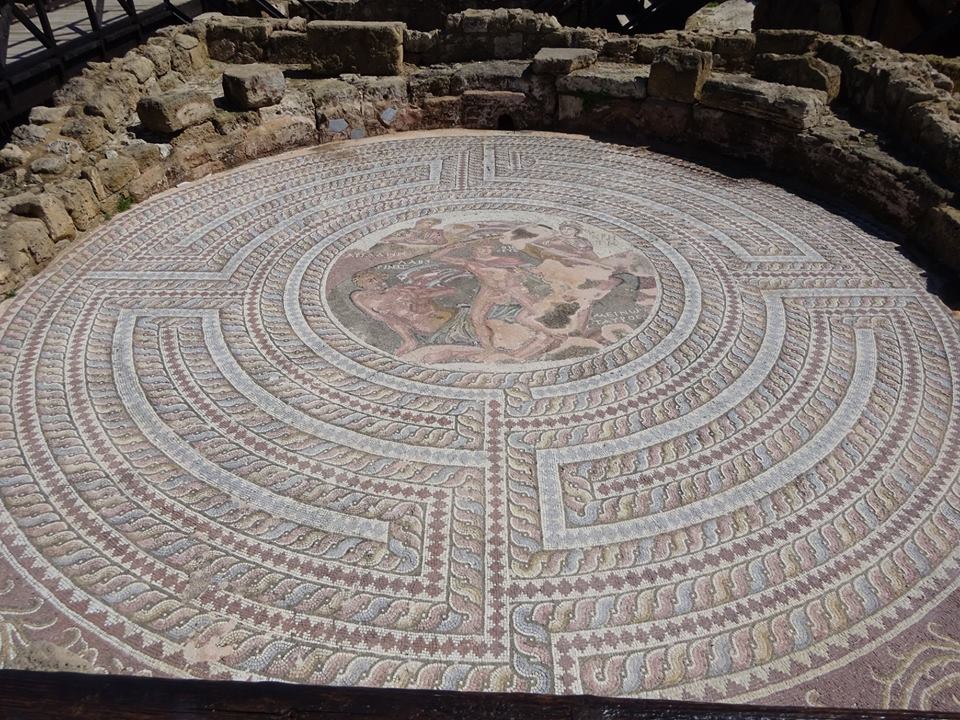 Previous readers of my articles may have noticed a propensity for photographs and visits to churches wherever I travel to. The Early Christian Basilica was the highlight of my first day’s sightseeing. The area outside the church is fantastically well preserved, particularly the towering columns as below. The church which now holds services for both Catholic and Christian faiths also has in its grounds St Paul’s Pillar where St Paul was reportedly lashed and beaten by the town’s people, on the orders of the Roman Governor, when he visited as a missionary to preach Christianity in 45 AD. It is said that he subsequently converted the city’s Roman Pro Consul Sergius Paulus to Christianity. 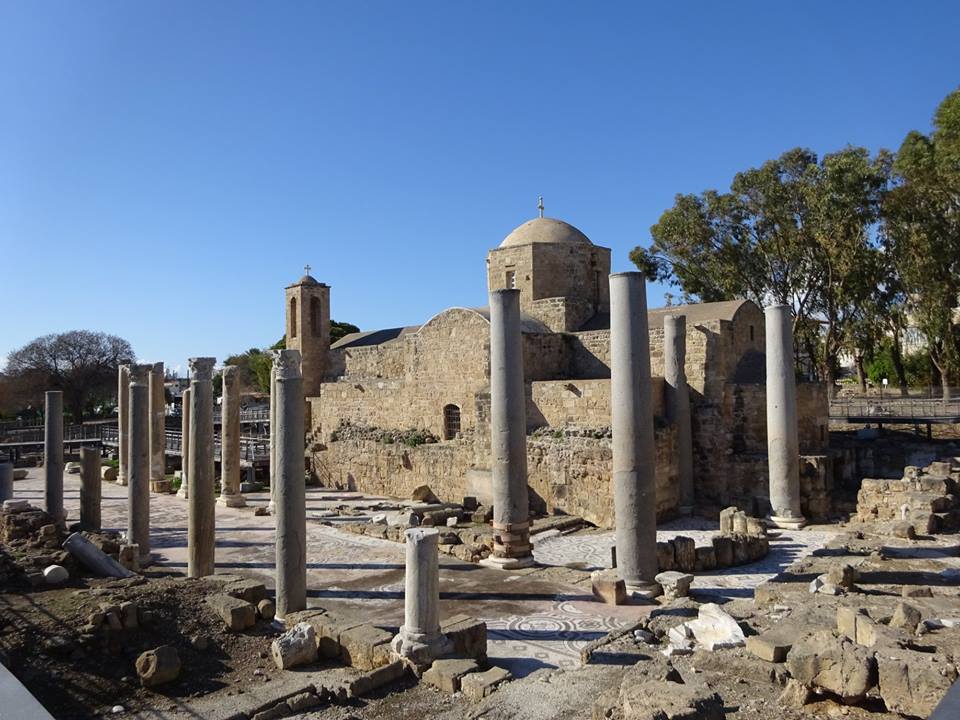 A short stay in the slightly creepy but well worth five minutes of your time Soloman’s Catacombs rounded off the day.

The Tombs of the Kings, just outside of town via a short bus journey (no. 615) from the harbour is an archaeological park that runs adjacent to the main Archaelogical Park in the harbour area but is visited separately. The name is actually slightly misleading as no Kings are buried here, rather local luminaries and notaries of the Hellenistic Period (323 BC) to the Roman Period (from 58 BCE). There are numerous tombs of which eight are particularly well preserved and adequate accompanying information is provided by each one. The vastness and complexity of these structures is certainly impressive given the period in question. They were initially excavated throughout the 1970s and 1980s and excavation is ongoing to this day. 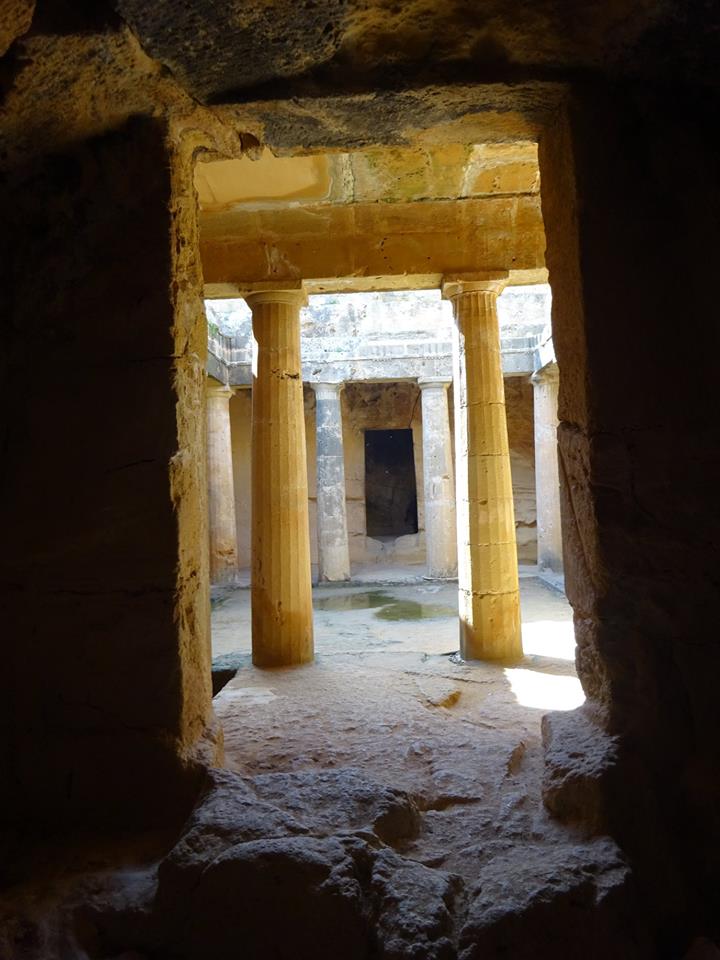 A stroll around the Old Town which can be reached via a short walk of 2-3 km from the harbour area (or short bus journey) will account for several hours of a morning but there is a dominance of cafés and you will see that tourism is certainly the main industry that supports the town. There does not seem to be any other kind of significant commercial activity in terms of finance or otherwise. That said, with strolling with no particular plan as the aim you should stumble across a delightful square and gardens as well as colonial buildings with a hint of baroque architecture. The tourist cafés also provide a great viewpoint for vistas of the coastline. 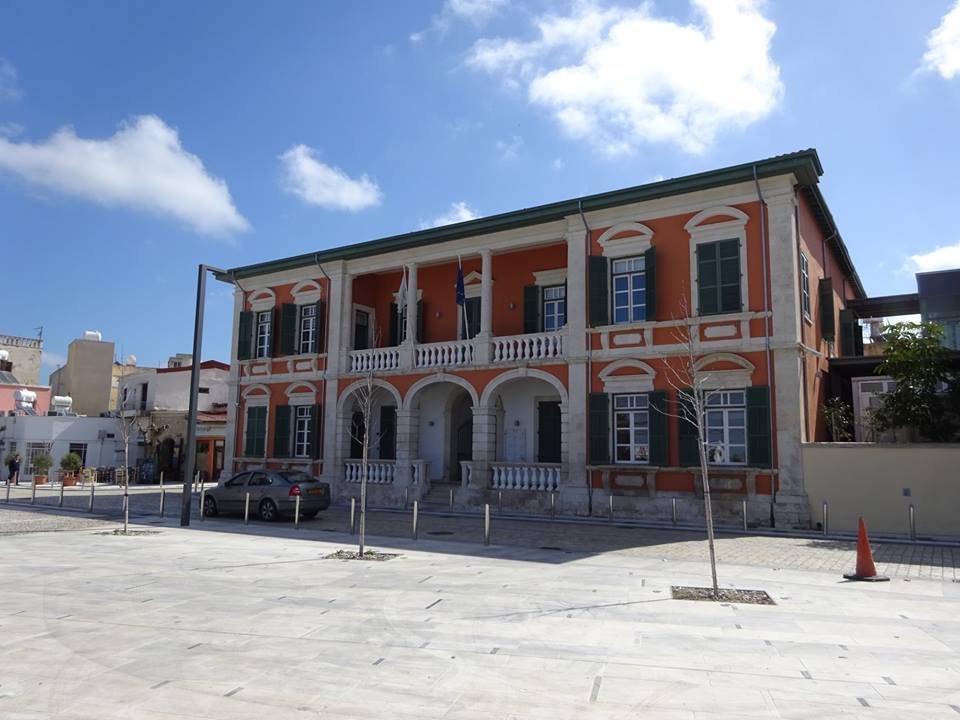 A Winter Sun trip to Paphos probably won’t change your life but with a very agreeable climate of 18 degrees and above in the daytime from mid march, a couldn’t be easier transport system, several excellent sights, but most of all fabulous Cypriot hospitality it is certainly a must to experience.

SisyFos Roof Restaurant on Tomb of the King’s Road both for wonderful service and excellent food.

The Old Fishing Shack Ale and Cider House – a brilliant pub that is unique in the town. Notable mention: The Pit Stop – an excellent pub for food and watching sport, with a Formula one theme.

The King’s Hotel on Tomb of the King’s Road is perfectly equidistant from the port area, the Tombs of the Kings site and the old town as well as boasting an excellent sun terrace and patio and being close several excellent restaurants.