The only interesting event of my mammoth twenty three hour bus journey from Rio to Foz de Iguazu was a tearful man getting on the bus, and performing what seemed like a dramatic interpretation. He was pretty upset about something and managed to siphon a few reals out of several passengers.

“They” say that it is well worth seeing the waterfalls from both sides, and similarly there is also a viewpoint where Argentina, Brazil and Paraguay are all visibile. However I settled for just seeing the falls from the Argentina side, which like Canada for Niagara Falls, is the better option. The waterfalls are stunning and powerful, the recent rainy weather meant that August was a good time to go as the water crashed down plentifully. We were even treated to a rainbow which fitted in perfectly. 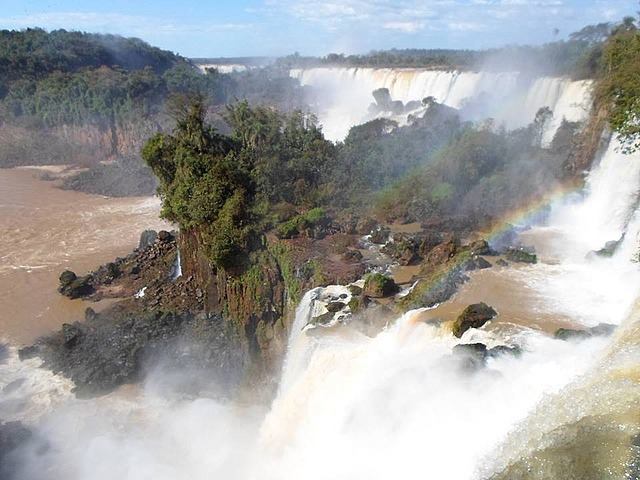 There isn’t too much else to do in tourist friendly Foz other than sample my first taste of salty steak that the Argentinians are rightly so proud of. Buenos Aires was my next destination via the much vaunted Argentinian bus network, which is clean, efficent, phenenomenal value and most importanly doesn’t really stop for any considerable period of time, even on long journeys.

The area around Buenos Aires main bus depot and surrounding metro stations isn’t the prettiest but certainly safe enough, and the metro is easy to use and good value. The reasonable price of transport is a common theme. Buenos Aires is a brilliant city. It’s bustling, modern, gritty and artistic. It boasts great variety, from the urban, artistic and working class neighbourhood of La Boca to the more upmarket Recoleta area and oozes with personality, pride, colour and passion. The street art in La Boca around La Bombonera (Boca Juniors home ground) is complimented by a smattering of art galleries that house numerous works, many paying homage to the area’s shipping yard roots. 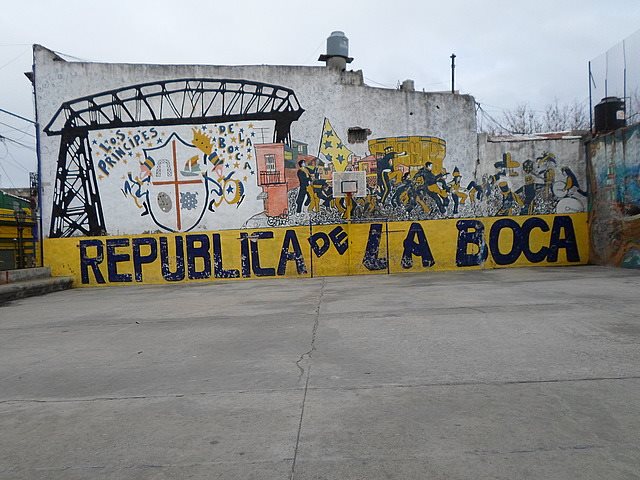 I would advise walking as much as possible to gain a real feel for the personalityand power of the city. It can be intimidating in terms of size and volume of people, but take a few moments to breath it all in. There are definite similarities with European capitals such as Paris and London, but with a distinctly South American twist. Of the main sights, the Recoleta Cemetery is home to Eva Peron’s tomb, and countless others of noted luminaries. Similarly the Eva Peron Museum gives an informative, if somewhat biased, depending on who you speak to, view of the former first lady who was known for her human and civil rights activity in the 1940s before she died from cancer aged just 33.

Achitecturally “BA” stands up beside any major city. The historic Plaza de Mayo being it’s main attraction on this front and is a photograph friendly area. Align all these factors to it being one of the best cities to party in worldwide, and the friendliness of the people, and it makes for an essential part of any trip to Argentina.

While in BA there is also the possibility of popping over to Colonia del Sacremento in Uruguay for a day via an hour long boat trip. This quaint, sleepy picture postcard town, boasts a host of quirky museums around a main square that has a vibe of old school meditteranean charm. There are numerous cafés, bars and restaurants to laze around in and watch the sunset across the bay.

After not only the best steak I have ever had, but comfortably the best steak anyone could ever have, I would guess, I continued on the gringo trail to student dominated Cordoba.
Cordoba is a university Town, and has a young and cool population. This lends itself to being a vibrantly artisitc city and a nightlife hotspot. My first day here I visited the Memoria Museum which is dedicated to those that died, and were tortured during Argentina’s so called Dirty War that took place during the dictatorship that ran from 1976 – 1983. The displays are innovative, and the families of those who perished were heavily involved in putting them together. The dedicated folders to those who died, containing personal items such as report cards, were particularly poignant and powerful. I felt echoes of the Genocide Museum in Phnom Penh. Generally speaking this is a relaxed, art dominated city and there are several other varied art galleries worth checking out. However if you think Sarmiento Park will provide some relaxation and respite from the bustle of the city, think again, it’s not the prettiest and in dire need of watering and rejuvenation.

Mendoza is the next stop on the way to Chile on the gringo trail which was frankly getting a bit silly, as everyone seemed to be doing the same route. Mendoza is predominantly about the wine, there is a not a whole lot going in the town itself. However the wine itself is plentiful and of great value and quality. Hiring bikes and cycling around the vineyards while drinking is one option, another is just taking a couple of tours, another is just drinking quite a lot. Either way, it’s about the red wine, mainly Malbec. The Parque San Martin is a generously spacious and tranquil open space away from the noise and hubbub of the city and certainly well worth whiling away an afternoon by the lake or meandering through the woods.

And that was that for Argentina, and Uruguay. Aside from the dangerously dark haired beauty of the population, the sumptuous food and stunning urban graffiti, Argentina boasts colour, pride and fantastic variation for any traveller. Unfortunately I was there at the wrong time of year for Patagonia, which is best in the spring, but this is one place that I shall definitely be coming back to.