What’s that Medieval Castle doing in the middle of the Hudson River?

Those that live in the area and travel along Rt 9W, Rt 218, or Rt 9D see it every day. Most wonder, “what the heck is out there”? Those of us that live around here have heard all the stories about it. Some venture to go out there in row boats or canoes, some make it, unfortunately some never come back due to currents and other natural forces and they perish in the attempt to discover it’s secrets. What is it I am talking about? It goes by two names, Popeill Island or more commonly called Bannerman Island. The island is only open for public guided tours and is closed all other times for safety reasons. There is an alarm. If found on the island you are TRESPASSING and will be prosecuted.

Pollepel – An Island Steeped in History

A tiny jewel in the setting of the Hudson Highlands is called Pollepel, now familiarly known as Bannerman Island. Once an uninhabited place, accessible only by boat, it was considered haunted by some Indian tribes and thus became a refuge for those trying to escape them. These superstitions and others promoted by later Dutch sailors make for many fanciful tales. Even the name Pollepel (Polopel) originated with a legend about a young girl named (Polly) Pell who was romantically rescued from the breaking river ice and landed on the island shore, where she was promptly married to her sweetheart, who rescued her and her companion. The island was thereafter called Pollepel.

History reveals a connection to the American Revolution in attempted defense of the Highlands against the British fleet in 1777 using the famous “chevaux de frise”. These were devices constructed of wooden cribs sunken in the river, filled with metal-tipped, pointed logs to obstruct the passage of ships up the river by damaging their hulls, built by men commandeered from the local prison. The attempt was however, unsuccessful, as the British took to flat bottom boats and avoided the chevaux de frise. One of the “points” is now on display at Washington’s Headquarters in Newburgh, New York.

Since the time of the revolution there have been only five owners – William Van Wyck of Fishkill, Mary G. Taft of Cornwall, Francis Bannerman of Brooklyn, New York, and The Jackson Hole Preserve (Rockefeller Foundation), which donated the island to the people of the State of New York (Hudson Highlands State Park, Taconic Region, New York State Office of Parks, Recreation and Historic Preservation.) 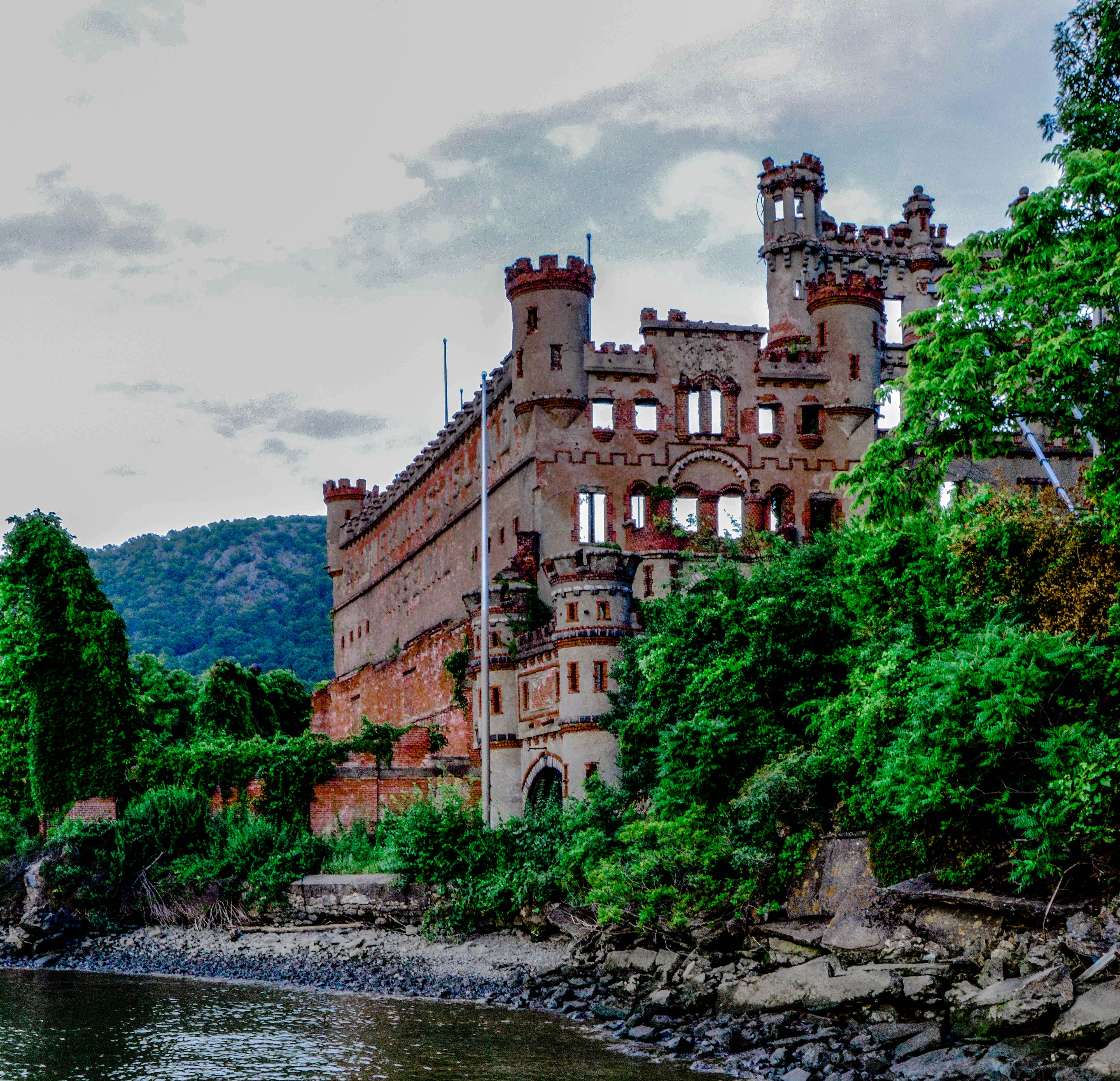 Francis Bannerman (Frank) was born in Dundee, Scotland in 1851 and came to the United States to live in Brooklyn, at the age of three. His father took up the business of selling goods at Navy auction. Young Frank, while still in school, began to collect scrap from the harbor, then full of sailing ships. He was so successful at this that it soon became a business. At the end of the Civil War he increased his wares by buying surplus stock at government auctions. This source continued even after the Spanish American War. In 1872, on a buying trip to Ireland, he met and married Helen Boyce. Subsequently they had three sons; Francis Vll and David Boyce joined him in the business, and Walter became a doctor.

The business, known everywhere as “Bannerman’s” was founded in 1865 in Brooklyn. As more and more material was acquired, it moved several times, finally arriving at 501 Broadway, in Manhattan. From the Spanish War so much equipment and ammunition was bought that the laws of the city forced them to look for storage outside the city limits. 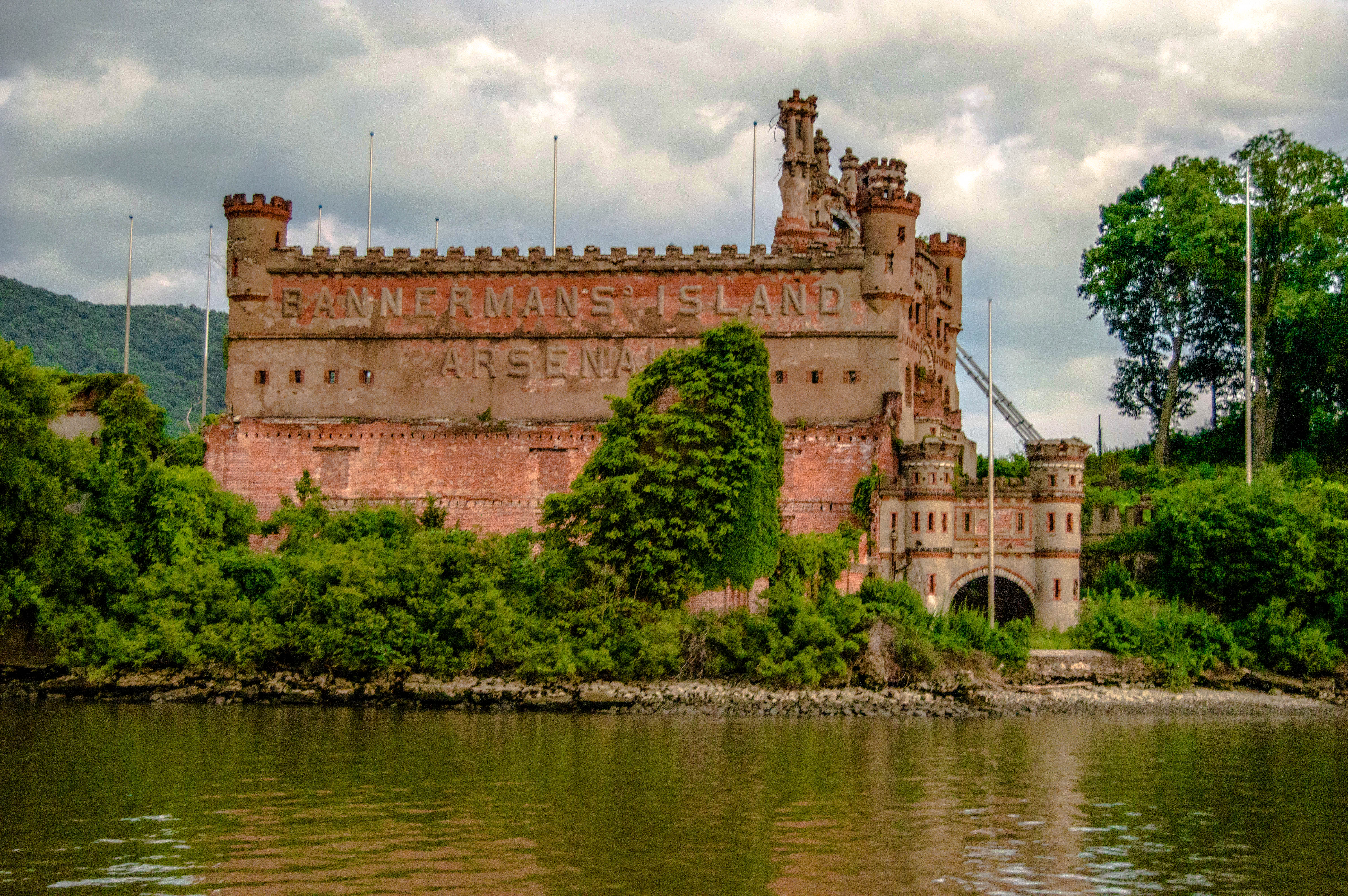 By chance while canoeing on the Hudson, David Bannerman noted the island. The Bannermans purchased it from the Taft family in 1900 as a safe storage site. Mr. Bannerman began construction on a simulated Scottish castle and simple residence in 1901. Equipment of every description as well as ammunition were shipped there for storage until sold. Although Frank Bannerman was a munitions dealer,he described himself as a man of peace. He wrote in his catalogues that he hoped that his collection of arms would someday be known as “The Museum of the Lost Arts”. He was a devoted church goer, a member of the St. Andrews Society, founder of the Caledonian Hospital, and active in a boy’s club – often taking them on trips to the island in the summer months. During World War I he contributed cannons, uniforms, and blankets to the U.S. government. Frank and Helen Bannerman used the house on the island as a summer residence. Mrs. Bannerman, a successful gardener, enhanced the paths and terraces with wonderful flowers and shrubs, some of which still exist today.

Many tales both serious and comic have been told about this place over the years, some recounted in a pamphlet by Frank’s grandson Charles, who wrote prophetically in 1962 – five years before the island was given to the Taconic Park Commission, and seven years before the great fire that caused such destruction:
“No one can tell what associations and incidents will involve the island in the future. Time, the elements, and maybe even the goblins of the island will take their toll of some of the turrets and towers, and perhaps eventually the castle itself, but the little island will always have its place in history and in legend and will be forever a jewel in its Hudson Highland setting.”

The remnants of the structure are in very bad condition. There is a house on top of the hill, some original gardens, many stone walls, a Skelton of the old arsenal along the water’s edge, and turrets out in the river that used to be part of the sea wall that was the entrance to this magnificent fortress.

All would have collapsed if not for one man, Neil Caplan. Neil hails from Baltimore Maryland, and was born in Mt Sinai Hospital there. He now lives in Beacon with his wife and runs a B&amp;B along with a Real Estate Company. His first love is the island. In the past, Neil and his wife used to come up on day trips, to get away from New York City. He was also looking for space to do theater. One day he saw paintings by a local artist named John Gould of Bannerman’s Island. He then found a picture of Bannerman Castle in a book called DAY HOPS TO THE Hudson valley. He thought this would be a great place to do theater. However, the castle needed to be stabilized and the grounds restored in order to do anything.

He also saw potential for the island to become a tourist destination and he started contacting NYS Parks Dept. But they were not interested in any of his ideas. He wouldn’t take no for an answer. He tried to get legislation passed to open the island to the public. This goes back to 1992 when he first became associated with the island. 1992 – 1994 Neil established a group called Friends of Bannerman&#39;s Island.

In 1994 he incorporated the group and it is now called BANERMAN’S ISLAND TRUST of which Neil is the Executive Director and Founder. Neil says me that the island has become part of his life and that he spends a lot of time and effort with the organization, not to mention being hands on out in the field trying to bring back the beauty of the island. He loves the Hudson Valley and he loves his new home town of Beacon. 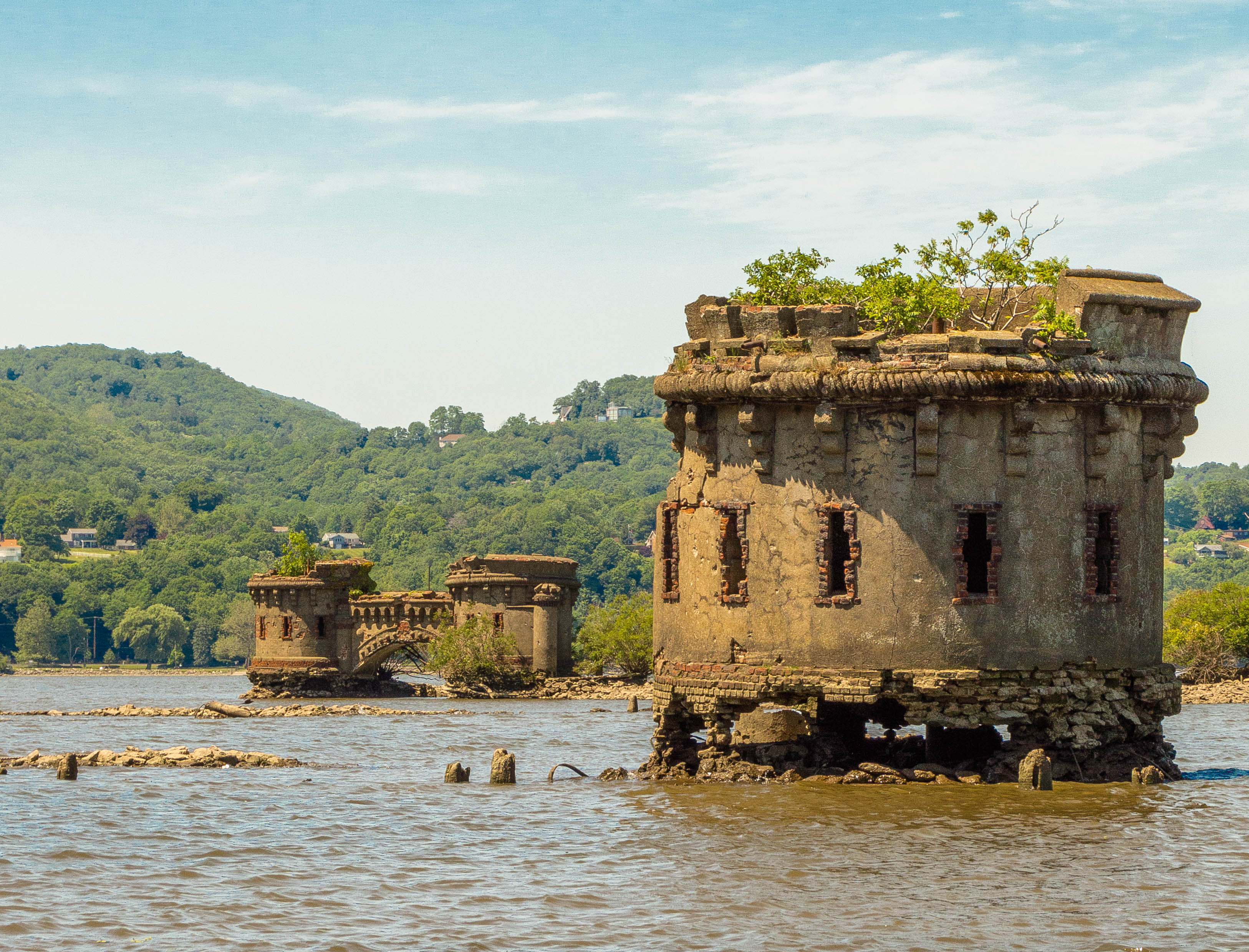 The BCT is a “Friends” organization of volunteers and a small paid staff, working with the New York State Office of Parks, Recreation and Historic Preservation to preserve Bannerman Island. The trust is a mixture of paid contractors and local volunteers who also love the island. The day I was out there, prior to my trip over by boat, 2 other boat loads of “workers” went before me. When I finally did get out there, I saw people doing gardening, there were masons working on the house on the top of the hill, and there was a man fixing a generator at the dock. There was
another man (who was also the captain of the boat) trying to figure out how to rig the props for a Veterans Performance that was to take place that weekend. It seems everyone pitches in out there.

Neil has been in the Theater Arts most of his life earning a Degree in the Arts which lends itself nicely to the activities he produces out there on the island. Performances take place there thru the summer organized and performed by non other than The Hudson Valley Shakespeare Festival, a group called Just Off Broadway, and Theater on the Road Opera Company. Some couples have even gotten married out there with the old castle as the back drop to their nuptials.

Neil’s plans for the future on the Island are simple. Continue offering theater performances. Continue to restore the Original Gardens which are everywhere. And continue to restore the buildings. His goal is to get other people as involved in the work that needs to be done out there. One achievement was to get Cadets from the United States Military Academy at West Point to come out and rebuild a bridge that was over a small ravine and leads to a set of steps that goes up to a look out point. When you get up there, the view is amazing. And the bridge is a true Engineering Masterpiece. There are some local sponsors that help him out but there is always room for more.

Upcoming performances this season are:
Romeo and Juliet performed by the Hudson Valley Shakespeare Festival, which takes place 15 and 16 July.
Whiskey Women Moon Shine Party, Theater in the Round, Aug 19
War of the Worlds – Theater in the Round in Sept.

Films Presented by Story Screen, on the island:

Dracula 8 Sept and Bride of
Frankenstein 15 Sept, what a GREAT place to watch a horror film.
On September 9th the 8th Annual Chef’s Farm Fresh Dinner will be presented on
the island.

If you go to the web site at www.bannermanscastle.org you can get more info on catching The Estuary Steward for a tour of the island.

There is also another exhibit there called the Constellation Project. A local artist had an idea to put lights atop tall masts all around the castle. At dusk, it looks like stars twinkling over head. I have taken this trip and it is magical. You catch a boat in Beacon, which is near by, they take you to the island. You get a tour, then at dusk get back on the boat and you cruise around the island as the sun sets. The lights come on and you see what appears to be a constellation of stars hovering over the island. This was very impressive. You can find out more about this tour at
http://www.melissamcgillconstellation.com/