I was glad to get back to the island in October 2017 after several years. It continues to be a charming spot to go back in time. 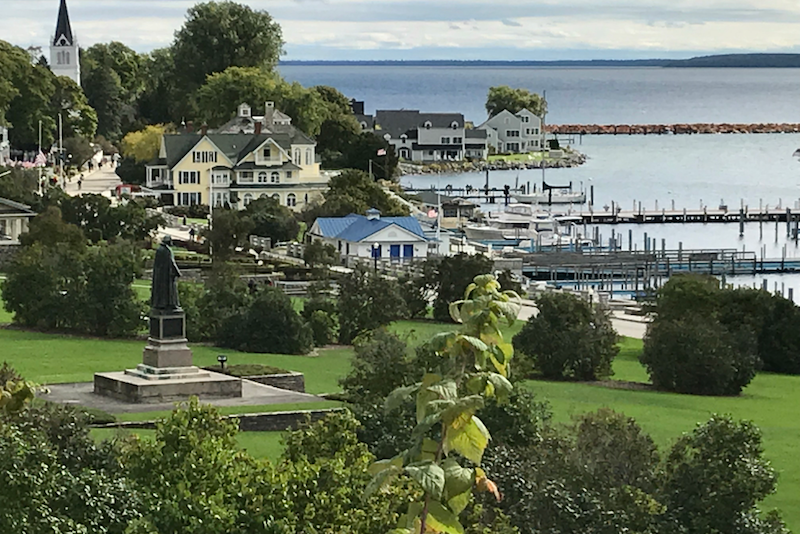 Mackinac Island is a 3.8 sq. mile island that sits in Lake Huron, between Michigan’s Upper and Lower Peninsulas. Mackinac Island State Park—with trails, woods, and rock formations—covers most of the island. It was settled by Europeans in the late 1600s and early 1700s, and soon became a strategic position as a center of commerce of the Great Lakes fur trade.

The original Fort Michilimackinac was started by the French in Mackinaw City on the mainland. The British took control after their victory over the French in the Seven Years’ War. During the American Revolutionary War in 1780, the British moved the garrison and the fur trading community to Fort Mackinac. Fort Mackinac later became the site of two battles during the War of 1812. After the war, the British were forced to turn it over to the Americans—John Jacob Astor’s American Fur Company became centered there.

Following the Civil War, the island became a popular tourist attraction and summer colony. Beginning in 1898, motorized vehicles were prohibited on the island when a car frightened several horses. This ban continues today! After the fur trade waned, Mackinac became a fishing center, and in 1875, Congress made it the second National Park. It was later turned over to the state and became Michigan’s first State Park.

To accommodate the growing number of tourists, the boat and railroad companies built hotels, including the famed Grand Hotel. Souvenir shops started to spring up along with many summer home cottages. Today, many of these structures remain, which gives the island a wonderful, historic feel and charm.

Getting to the Island

To get to the island, you have to take a ferry from either Mackinaw City or St. Ignace, which is further north across the Mackinac Bridge. The ferries from Mackinaw City are more popular and, therefore, more crowded.

At the suggestion of my hotel, I chose Shepler’s Ferry from Mackinaw City to the island. Upon arrival at the dock,you can valet your car or use the self-park lot. They will then check your bag right to your hotel. This is so convenient! On the return, your hotel can check the bags with Shepler’s, and when you arrive, it is easy to pick them up and retrieve your car from the nearby lot.

Before you leave the island, if you have used the valet, they call ahead to make sure your car is there when you arrive. Just check the schedule as the frequency changes depending on the month and day of the week. They run from the end of April to the end of October. I would also book your ticket online as you can save a few dollars and wait in a shorter line upon arrival at the dock.

What to See and Do on the Island

There are many things to see and do while on the island. Make sure to visit:

Ft. Mackinac is a historic American Revolutionary War fort, built by the British to control the Straits of Mackinac between Lake Michigan and Lake Huron. The admission includes visiting 14 restored buildings, which are furnished with period settings highlighting the building’s particular function or a themed exhibit. Tours and special demonstrations are available. The Tea Room, operated by the Grand Hotel, is a perfect spot to enjoy lunch on the terrace overlooking the city and the harbor. 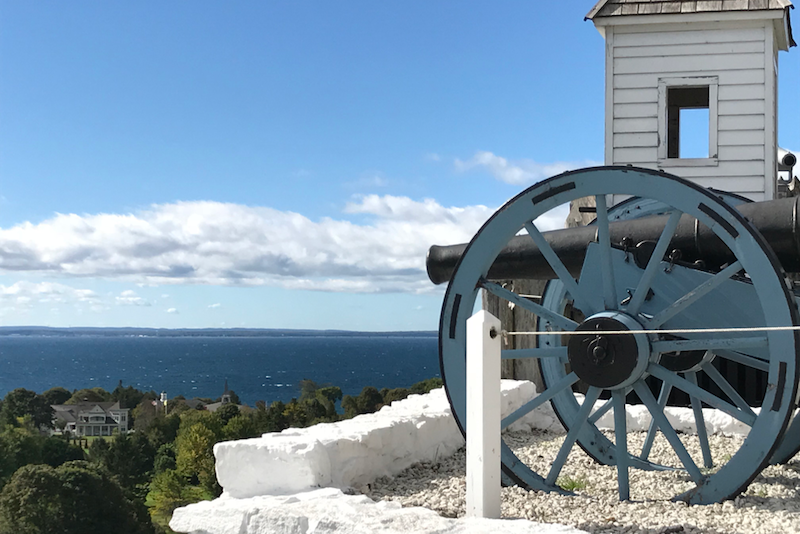 With a ticket to the fort, you can also get free admission to the Richard and Jane Manoogian Mackinac Art Museum. Here you will find paintings and decorative arts inspired by the island throughout its history.

Downtown, there are a number of shops, boutiques and galleries. One of my favorites is Mackinac’s Little Gallery at 7410 Market Street. It features the works of close to 30 artists, including works by Kristin Hosbein, a friend from St. Joseph, Michigan. 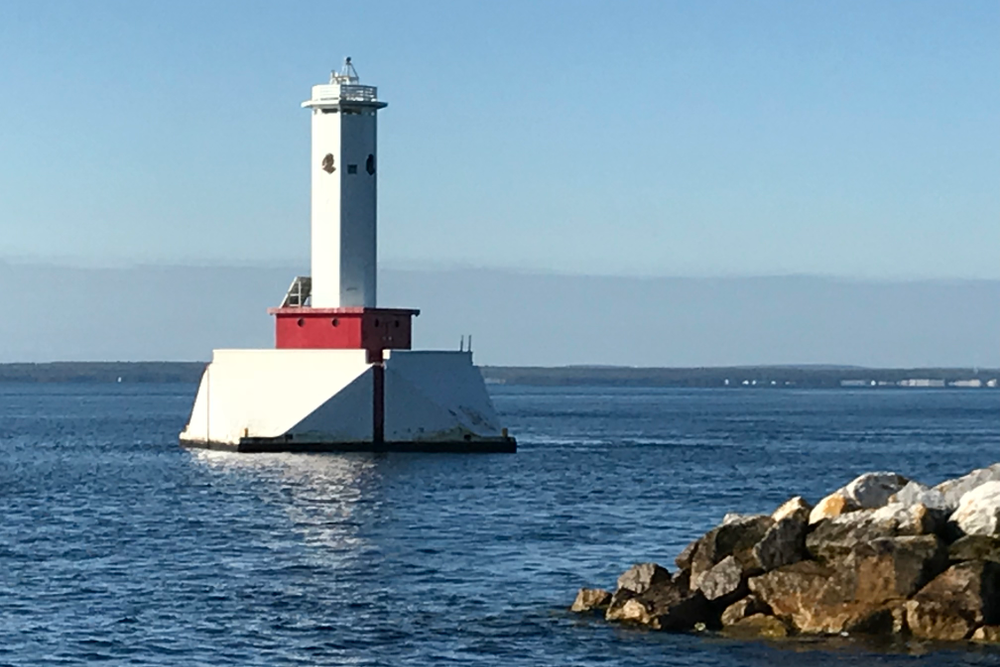 From May to October you may enjoy Mackinac Island Carriage Tours, horse-drawn carriages that take you to all of the island’s major points of interest. I found that the carriages can be crowded, so taking a taxi say from downtown to the Grand Hotel can be a fun way to see the island as well.

Bikers will love biking on the island. You can rent a bike along with water, helmet and a basket from Mackinac Cycle located at 7271 Main Street.

Located downtown at 7447 Market Street, Cindy’s Riding Stable offers horse rentals by the hour, so you can explore the island on your own.

Across from Cindy’s Riding Stable are several historic buildings including the McGulpin House, the American Fur Company Retail Store & Dr. Beaumont Museum, the Biddle House, and the Benjamin Shop, comprising Historic Downtown Mackinac. You can tour the buildings for free with your ticket from the Fort and the Mackinac Art Museum. Similar to Colonial Williamsburg in Virginia, you can visit with and talk to volunteers in period dress.

Mackinac Island State Park is Michigan’s first state park that was established in 1895 and contains 70.5 miles of signed roads and trails. Some of these trails are paved, some are not, with some shared by horses, bikes, and walkers—and others for hikers only. The park includes the Historic Downtown and the Fort. You will also see many natural wonders including woods and rock formations. Arch Rock is the island’s most famous geological formation and towers 146 feet above the water and spans fifty feet at its widest point. Sugar Loaf is a dramatic rock mass rising 75 feet above the ground and is the largest of Mackinac Island’s many limestone stacks. Other interesting geological features include Robinson’s Folly, Skull Cave, Devil’s Kitchen, Crack-in-the-Island, and Cave of the Woods.

Mackinac Island is all about fudge, fudge and more fudge. There are many shops on Main Street to taste and buy the famous candy. May’s Famous Mackinac Fudge has been a five-generation family business since 1881. The owners are currently in their 80s and 90s today.

The Original Murdick’s Fudge was opened in 1887 by sailmaker Henry Murdick, who came with his wife and son to make awnings for the Grand Hotel. His wife brought her candy recipes and started the tradition of fudge-making. The original location closed and the second sold to May’s. The current location at 190 South Huron is the newest operation and makes over 20 flavors including Traverse City Cherry.

Joann’s Fudge at 7408 Main and Ryba’s Fudge Shop at 7245 Main are two other good choices. Ryba’s is under the same ownership as the Island House Hotel.

There are a number of hotel options on the island, from B&Bs and inns to larger hotels and resorts. My recommendations include:

Mission Point Resort is a large resort with nice views on a quiet side of the island. They offer a full breakfast buffet in the Round Island Bar & Grill, plus Chianti for fine dining, the Bistro on the Greens, and the Boxwood Coffeehouse & Cafe. There is a gym, boutique, spa and salon, putting green, tennis courts, and bike rentals. I enjoyed my stay and the fact that I could walk into town to explore or enjoy a local restaurant and not have to rely totally on the horse-drawn taxis.

For over 130 years, the historic Grand Hotel is a great example of old-world hospitality and charm from a bygone era. From the historic building, the traditional afternoon tea in the parlor, the tradition of dressing up for dinner in the dining room, and nightly dancing to the sounds of the Grand Hotel Orchestra to sitting on the world’s longest porch with views of the Straits of Mackinac, you must visit it when on the island. The 1980 film, Somewhere in Time was filmed at the hotel and starred Christopher Reeve, Jane Seymour, and Christopher Plummer. 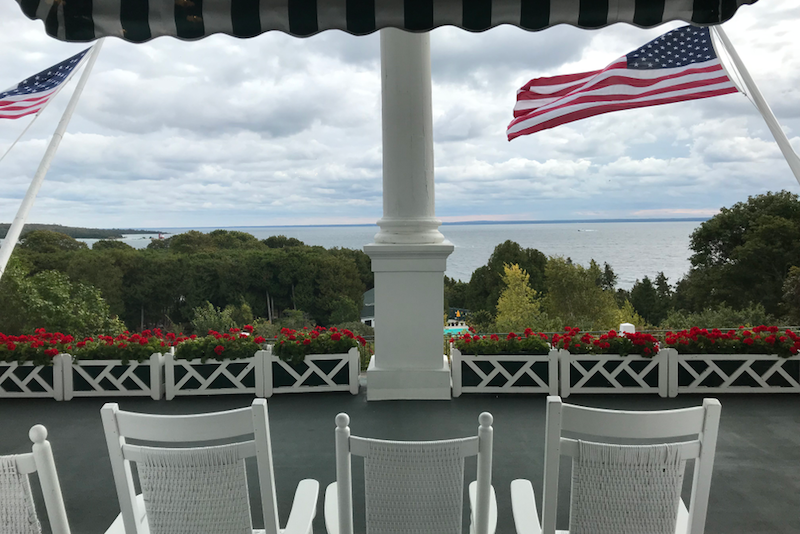 Iroquois Hotel is an award-winning hotel located at the western end of Main Street downtown. The once-private home, built in 1900, is a charming spot with wonderful views of the water. It has 36 rooms and 9 suites along with the Carriage House Restaurant, which has both indoor and outdoor patio seating. I went for dinner and loved the experience.

Where to Eat on the Island

There are some wonderful dining options, from casual to more formal. My recommendations include:

The Ft. Mackinac Tea Room (7127 Huron Road) is located at the edge of the fort and operated by the Grand Hotel. It is a perfect spot to enjoy lunch on the terrace overlooking the city and the harbor. This was my first stop after getting off of the ferry. 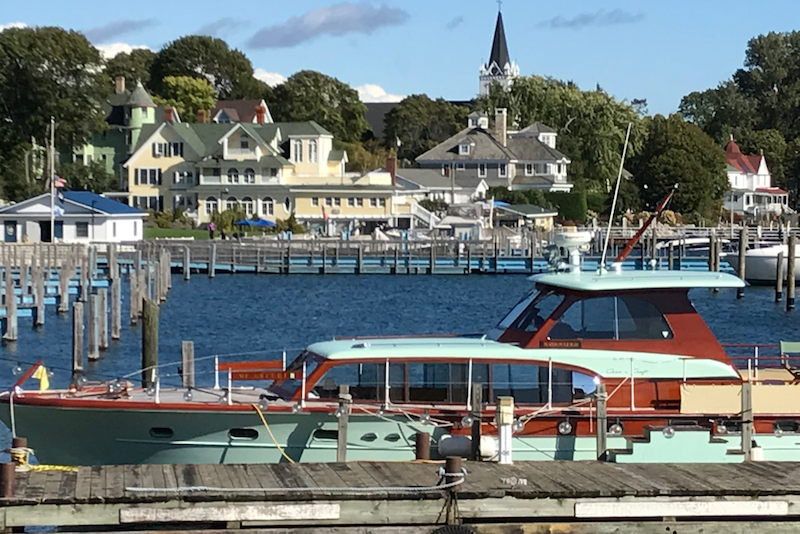 And finally… nothing makes for a more elegant afternoon than Afternoon Tea at the Grand Hotel. From 3:30 pm to 5:00 pm, tea is served in the hotel’s glamorous Parlor, accompanied by live music. The cost includes champagne or sherry, a pot of tea of your choice, a plate of finger sandwiches, and a plate of colorful pastries. Unlike dinner, jackets and ties are not required for men. Also be aware that during the high season, there may be an admission fee added to your bill for non-residents of the hotel.

With a season from May to October, so many things to see and do, and a limited number of hotel rooms, book ingood time if you plan to visit the island and explore all that it has to offer. You will love it.

For much more from Robert, check out his excellent site at: https://globalphile.com/