A quick border cross to get some US dollars has turned into a week long holiday with unexpected surprises, the first being Montevideo. We rolled into town at 8am not knowing what to expect, and found an awesome little city. The cleanest so far on our travels around South America, especially for a capital. Our hostel was a bit of a walk to the beach side of town and we got to familiarise ourselves with some of the streets.

The Rumbla in Pocito is a long stretch of beach road that we can walk along, one way goes to the Montevideo sign and the other to the light house (turned out to be really small, nothing like the Round the Twist Lighthouse in Apollo Bay). The walk way goes on for longer than 12km (that was the last sign we got to). We took some photos and just enjoyed walking in the sun, again we have been blessed with beautiful weather and cloudless skies. 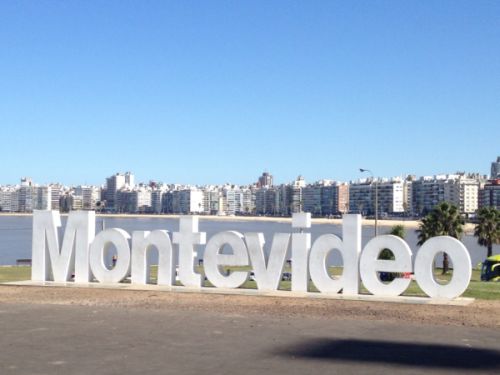 We checked out our area a little more and found a super fancy shopping center. It was attached to the Sheraton hotel, and had all the international brands we love but at homeprices. Our second day we walked through the downtown area to the old city and the port area. It was a long walk but we saw lots of really pretty buildings in a variety of different styles. There were also many tree lined and fountain filled plazas to entertain us. Men cooking almonds with honey popped up everywhere. Plaza Independencia was quite special and huge in size, complete with a man on a horse statue (we have no idea who of). There were soldiers or guards in full dress in attendance, they looked good. The theato del sol was another amazing building. 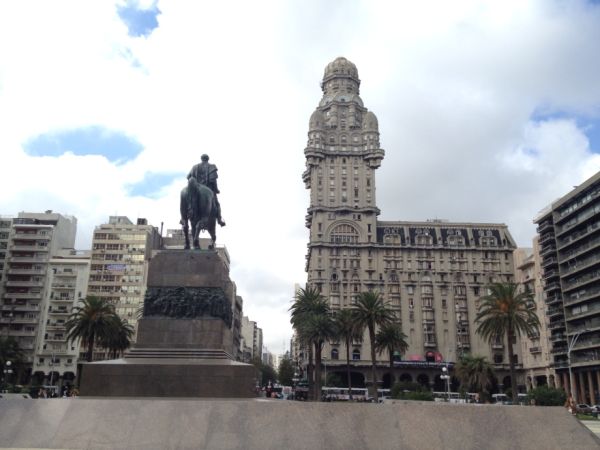 We took advice from some locals who suggested we go to have lunch at El Mercardo del Puerto in old town, so we went down and had a steak lunch with Merlot. The food was really good. The steak was big and fat and juicy, they barbecued it like it was a roast. We sat on top of a balcony that swayed consistently, but the view down into the parrilla’s was great.

We found a great little bakery to buy some snacks, it had loads of pastries and cakes etc. This little old lady started talking to us but we had no idea what she was saying to us, and when we told her in spanish that we didn’t understand and only spoke a little spanish she proceeded to tell the lady behind the counter that we didn’t understand and to be nice to us. She patted me in the shoulder and giggled as she left the store. I’m beginning to love little, spanish, old ladies.

Our third and final day in Montevideo, we were surprised to walk out the front door and find a fruit and veg market on our door step. It had everything that you would need at great prices. Plus cheese vans as well as meat and fish vans. We wandered through before heading off to spend the rest of the morning organising bus tickets to Punta Del Diablo. We heard there is a really nice national park that you can ride bikes through and a fort at the end. Then we headed back to old town to find the Gaucho Museum and the Romantico Museum.

The Gaucho Museum houses artefacts from the traditional gauchos and explanations of what life was like for them and it’s free. The Museum itself was cool, lots of interesting facts and objects such as knives, guns, the spike things they wore on their feet, whips and drinking containers made from horns.
We walked around for ages looking for the Romantico Museum only to find out we passed it three times not knowing that it was it because it was closed. The museum was supposed to be a house from the 1830s that had been remodelled to look as though it did in it’s heyday; complete with furniture, clothing, jewellery and art, so show what life like was like for the cities elite at that time. It was a shame that it was closed. 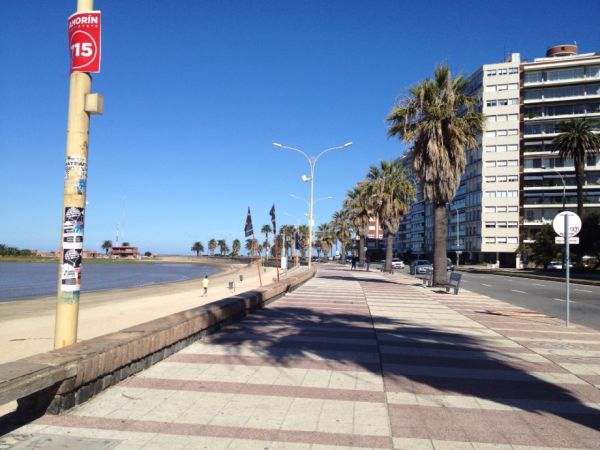 We decided to walk along the beach from old town to Pocito. We started at the 1.5 km marker and walked until the 7.5 km marker and our street. Again it was so lovely to be in the sun!