You might be thinking,” What is there to see in New Mexico?” I always thought of this state, which is known as “The Land of Enchantment,” as a relatively flat desert with not much to offer. However, you will discover if you go that New Mexico’s motto impressively lives up to its name. Standing at 11,981 feet, the snowcapped Sierra Blanca White Peak Mountain in the winter sure grabs peoples’ attention. Covered with a vast amount of scenic beauty, New Mexico draws residents and tourists who love the picturesque and peaceful surroundings, as well as the rich history and cultural heritage. If you fly to El Paso, which is about 45 minutes from Las Cruces, you’ll find that the view from above resembles another planet. You might find a completely rugged landscape like that to be quite surprising, especially if you have lived on the east coast all of your life. The initial image of New Mexico as an empty, desert waste land gives way to a picture that included several sights to behold. 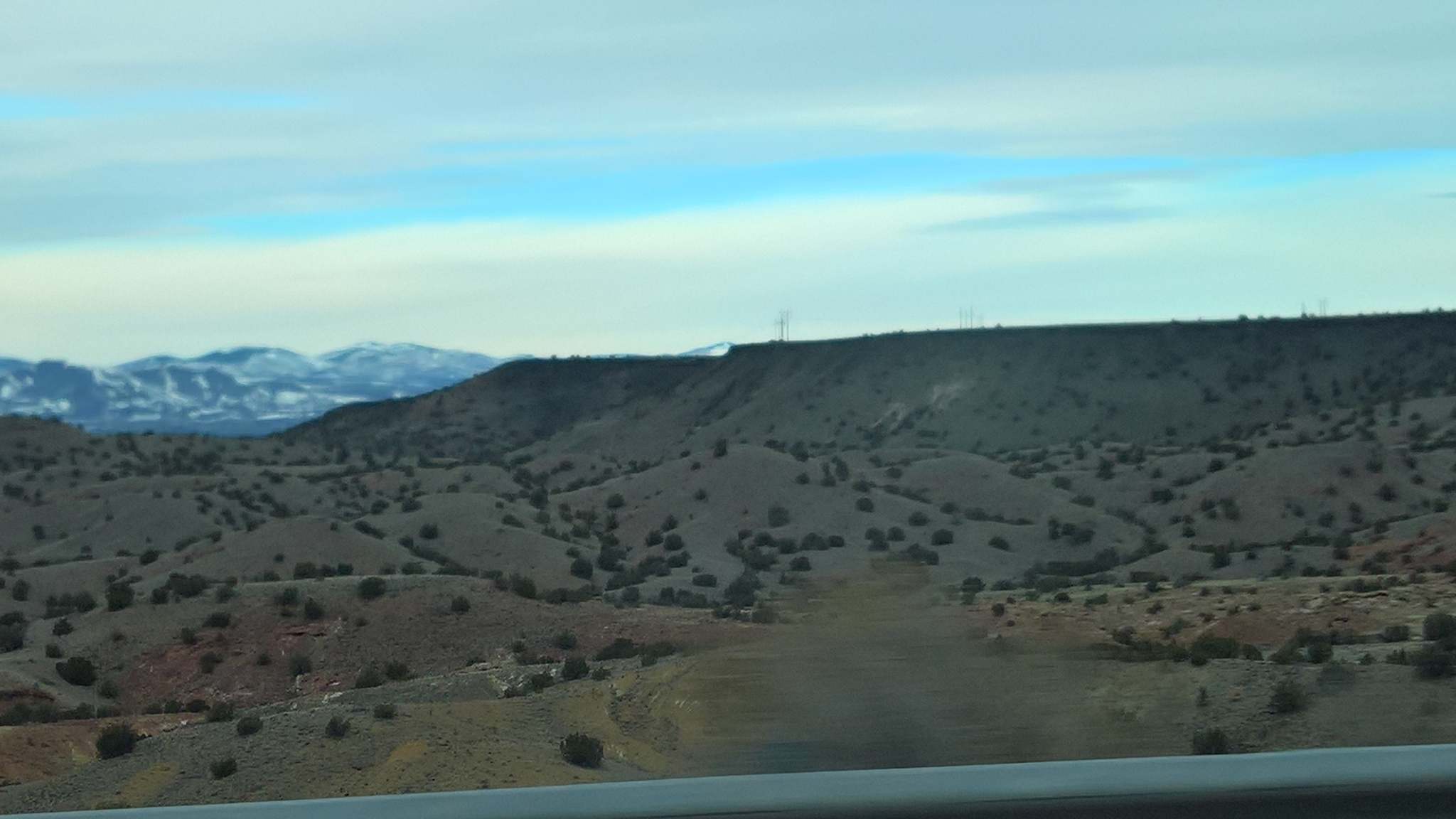 It is the middle of winter with the sun brightly shining. The temperature rises to sixty-five degrees. Not one cloud appears in the sky. You lay out in the sand as if tanning or taking a nap on a beach. On a couple of the many “sand dunes,” kids playfully and joyfully sled down those steep hills. You see them having a blast. Unlike sunning on the beach though, where the humidity can sometimes make it uncomfortable, the temperatures felt perfect. Depending on which dune you lay on, it was so quiet you could hear a pin drop, thanks to the calm wind. You then pick a spot in the middle of this vast and white landscape, and you relish in the peaceful, quiet surroundings and spectacular view of the Alamogordo mountain range in the distance. 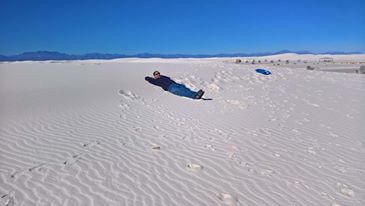 Talk about resembling another planet. People include White Sands National Monument on their favorites list. The drive up to the actual site might feel bumpy as you approach the entrance to the monument. The roads appear plowed with mounds of what looks like snow on the sides and lesser amounts in the middle. Actually, those roads as well as all of those white sand dunes that blanket the landscape as far as the eye could see are made up of gypsum. An ancient sea left behind deep layers of gypsum when it retreated, according to the monument’s exploration guide. It states, “Mountains rose and carried the gypsum high.” The numerous white gypsum dunes and the towering mountain peaks visible all around in every direction makes this one of the most–if not the most unique place in the United States. People would gaze at the stars on a clear, moonlit sky as if in a planetarium making it a prime spot for a romantic date night. Whether you visit during the day or at night, you’ll come back home describing the experience as incredibly refreshing and relaxing. The monument is located on Route 70 about an hour from Las Cruces. The site is 54 miles northeast of Las Cruces and 16 miles to the southwest of Alamogordo. For more information about this site, visit: https://www.nps.gov/whsa/planyourvisit/directions.htm.

Another favorite landmark is the White Sands Missile Range Museum. If you are into military and war history, White Sands Missile Range Museum closer to Las Cruces would provide you with an excellent opportunity for an informative visit. As you drive by and stop there, you’ll notice several dozen mainly white missiles varying in size, pointing directly upward or in a slanted direction towards the bright sunlit and clear, blue sky. Not every day do you drive by a site with missiles on display like that. The missile museum complex includes more than sixty examples of the items tested at Missile Park since 1945, according to the Post Guide. This site provides an opportunity for some great picture-taking moments and memories. You’ll see the Redstone, which boasts the army’s largest surface-to-surface ballistic missile. The length is sixty-nine feet, and the range is 200 miles if you can imagine that. The patriot missile, which is a long-range, all-altitude and all-weather defensive weapon, is also displayed at the site. And you’ll come across “The Fatman,” which was the second last nuclear weapon used in warfare in Nagasaki, Japan on August 9, 1945. And on a different note– and no it is not a flying saucer, but it sure looked like one–the Balloon Launched Decelerator Test Vehicle was used to test the Viking Mars Lander decelerator in the simulated atmosphere of Mars. This unique tourist attraction certainly contributes to drawing visitors to Las Cruces. The museum is about thirty minutes away from Las Cruces and conveniently located off Highway 213 near U.S. Route 70 right across from the breathtaking Organ Mountains, another major landmark in the area. Visitors will enjoy a worthwhile visit to the museum complex, which has outdoor and indoor exhibits. You will likely not come across another site quite as accessible as this with such numerous displays and copious amounts of information. The museum is open year-round. For more information about this site, check out: https://www.nps.gov/whsa/learn/historyculture/white-sands-missile-range.htm.

Southern New Mexico provides an opportunity for a relaxing vacation in the winter and a comfortable environment in terms of the weather. While you are in New Mexico and felt like taking a scenic drive northward to Santa Fe and Albuquerque, you would find the drive to be enjoyable, relaxing, and worthwhile. All over the streets of downtown Santa Fe and off the roads around the mountains, evidence of New Mexico’s extensive Mexican and Native American history and culture abounds. From the hustle and bustle of life on the East Coast or wherever you live to the serene life in the scenic desert out west, this truly remarkable experience would leave one feeling quite enchanted.