The adventurer, the seasoned sightseer, and the new traveller alike will all find something to appreciate about Guimaraes, Portugal, the location of the 2012 European Capital of Culture. Located next to the mountain Penha in the gorgeous Northern region of Minho, Guimaraes was Portugal’s first capital and the birthplace of the country’s first king. Today, it is home to beautiful historic castles, incredible scenery, and a thriving culture that will thrill and delight any travellers looking for unique European holidays.

Each year, the European Union designates one or two cities in Europe as the Capital of Culture. During that year, the city plays host to events, festivals, and celebrations that promote European culture. The 2012 Capital of Culture is shared between Guimaraes and Maribor, Slovenia. Guimaraes is already gearing up for the festivities. Creative icons from around the world will come to the city, and for one year Guimaraes will be the promoter of European diversity and expression. There will be many types of celebrations involving art, music, theatre, film, literature, philosophy, architecture, and all other facets of creativity. 2012 will bring Guimaraes alive, making it a destination you won’t want to skip out on. In the past, Capital of Culture cities have drawn hundreds of thousands of visitors from across the globe, allowing them to experience little bits of Europe all within one city, and the Guimaraes festivities are expected to be huge.

Next year, traveling to Guimaraes will be extremely popular due to the Capital of Culture festivities. These include an independent film festival, exhibitions by world-renowned artists, innumerable concerts by musicians from all corners of Europe, and the Guimaraes Jazz Festival, which is held every year and will be amplified tenfold in 2012 due to the events of the Capital of Culture celebration. And residents of Guimaraes as well as tourists can join in on the events too. The city will be filled with street art – creative navigational signs, installation art, and more. There will also be a Fashion Lab dedicated to bringing the unique textiles of Guimaraes into high fashion and art everywhere. 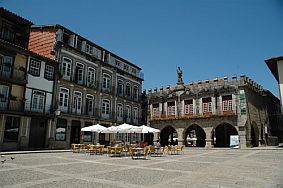 Guimaraes’ history is one of the main reasons why people visit the city. It was the starting point for the country of Portugal, and is considered one of the most historic locations in Europe, and is designated as a UNESCO World Heritage Site. It was the very first capital city of Portugal, and the country’s first king, Alfonso I, was born there in 1109. Today, you can tour the ancient castle where he lived and reigned, as well as the small chapel next door, where Alfonso I was baptized. You can also see the extraordinary architecture and decor of the Palace of the Dukes of Braganca, which is right across from the castle.

Guimaraes has many cobbled streets lined with restored historic buildings, and walking down them feels as if you’re back in the Middle Ages. You can visit some of the delightful cafes and ask the locals for stories and legends about the Gothic buildings around the city. You can also visit Guimaraes’ two foremost museums. The Alberto Sampaio Museum exhibits some of the world’s most beautiful religious art, as well as historical artefacts including battle armours and religious materials. The Martins Sarmento Museum contains artefacts from the lost Celtic settlement, Citania de Briteiros. It was inhabited for just 600 years, between 300 BC and 300 AD. After the museum, you can visit the settlement itself – much of it is still intact.

A visit to Guimaraes will not be complete without tasting some delicious local food. Guimaraes has unique pies, called “Tortas de Guimaraes”, and meat cakes that are especially favoured by those who taste them. The meat cakes are special kinds of bread topped with various meats, including pork or sardines. There are many restaurants to suit any tastes, so picky eaters need not worry, but trying Guimaraes’ local cuisine is a great way to literally get a taste of the culture.

There are several living options while in Guimaraes. You can find typical four-star hotels, or smaller, locally owned boutique-type hotels within the city. You can stay in a pousada, which is a historic building such as a palace, castle, or monastery, with personalized service and a wonderful selection of foods and wines. Another option is Portuguese villas, which can be rented for set amounts of time and make wonderful alternatives to regular hotels.