The rough Irish Sea threw the ferry from side to side, jostling my upturned stomach. Tiny beads of sweatfell across my furrowed brow as my clenched fists bore  white knuckles. In the attempt to hold the sides of my bursting stomach together, I wrapped my arms around my waist. I opened my mouth slightly, testing the limits my gut had agreed to. “Bag!” I groaned, as my cheeks flushed a new kind of scarlet. I could hear the cruel snickers from the sloshing waters outside as I tried to soothe the fire that grew within, if only to douse the walls with a calm thought. But then the voice of an angel spoke; we were nearing the harbour. I leapt up from my place in the cabin, shoved past the slow moving passengers, and struggled my way to the top deck. The knot that my stomach had become untangled itself as my feet found solid ground.

As I stepped off the ferry I was greeted by dozens of tiny fishing boats that bobbed along the slapping waves. The fog from the sea hung in heavy clusters and I could feel the pungent sting of the salt air on my tongue with each cool breath. Beyond the harbour lay a backdrop of olive hillsides divided into checkering squares by crumbling stone walls. Tiny white cottages were nestled together alongside the shoreline and their firelight flickered through the sea broken haze. Drawn by the lazy streams of smoke that rose from each chimney, I headed toward the village.

As I neared the shops I was led astray by a growing crowd. I followed the flock and found myself amidst the commotion; a growing queue for bicycle rentals. Entranced by the romanticism of winding through the ancient cobblestone streets, I paid the shop owner with a fistful of crumbled bills and mounted the nearest bicycle. I took off in a dead sprint, flagged on each side by fellow riders, chasing nothing but my own shadow around each bend. Pockets of drizzling rain formed tiny puddles that we laced between and our only worry was the mud our tires kicked up behind us. 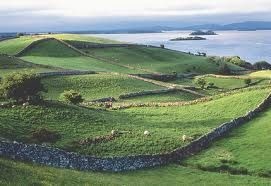 My mind was at ease; no thoughts to crease my brow, no fears to consume me. I was content with thewhistling melodies of the wind and the clinking of bike chains. This is what peace feels like, I thought to myself. As we rounded the last twist of our journey, an aching formed deep within my stomach. It didn’t burn like on the ferry and my fists remained unclenched. This raw truth I found on The Aran Island of Inishmore wouldn’t last forever. I would go home and remember this feeling as if in a dream. But despite all realities that awaited me, I was reminded if only for a moment of the tranquility that wells deep within us. Sometimes it just takes a bike ride in the rain to find it.