Imagine walking the halls of a homestead that has been standing since the mid–17th century .At the Jonathan Corwin estate (aka the Witch House) you will discover not what happened during those trying days in 1692 but what life must have been like. The moment you enter the estate, you begin thinking just how small a house, once considered a mansion at the time actually is. You may also start to comprehend how the events that have become known as the witch hysteria unfolded.

Picture yourself living at a time when young ladies wanted to know their future because they felt constrained within society. Living in the 1600s, adolescent girl’s expectations were rather slim. They, unlike males of the day had very little prospects other than marriage; even then they might end-up in a less fulfilling relationship. So, was it surprising that some females turned their attention to fortune telling?

Within a small community as well as in the tiny mansion, known as the Witch House emotions probably ran amok. Within the Jonathan Corwin house, as you will notice there is not much room to move, think or even breath. Even though Salem’s population lived at vast distance from each other, the community itself also is extremely close knit. As you walk through these hallowed halls you too will begin to feel restrictive. You will feel an atmosphere on the brink.

Can the events of the 1692 witch hysteria ever happen again?

The occurrence of witches have been around since the dawn of time.The witch hysteria in Salem is just a small fraction of those killed within the scope of witchcraft through out the centuries. The house, located at 310 1/2 Essex Street is an important reminder of these terrible days; days where persecution and intolerance rule. So please stop by the Witch House and pay your respect. Walk the floors once strolled by those inhabitants from a not so distance era. 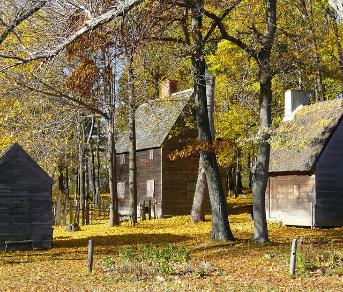