The Heat was Hot

1970s folk-rock band America is often criticized for their inane lyrics. While the tune “Horse With No Name” is arguably catchy, the lyrics are nonsensical to the point of ridiculousness. The pinnacle of this absurdity culminates at the line: “the heat was hot”. Of course the heat is hot, I often thought when I heard the song over grocery store speakers. But that was before I visited Beijing. Now I understand how the heat is hot. Really hot. I had experienced summer months in some hot places – the Yucatan Peninsula, the Arabian Desert, downtown Hong Kong and Kuala Lumpur – but Beijing in July was a different kind of beast. It was brutal. Nothing can prepare one for the smoggy, humid heat that burns like a chemical sauna. 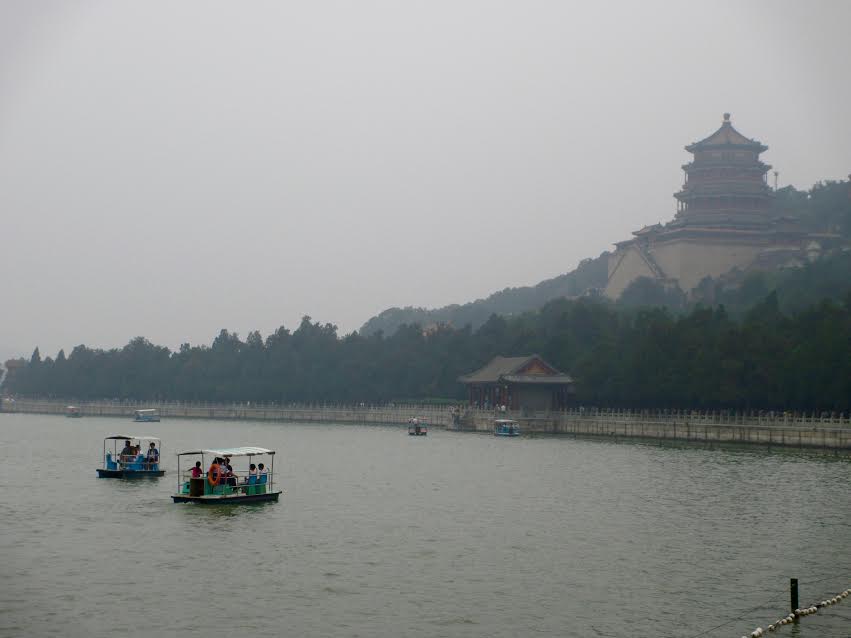 I arrived in Beijing in the middle of the night with forty-three high school students and four other teachers from across British Columbia. It was just before the first day of an international summer camp hosted by the Chinese government. By the time we did a head count, got everyone’s luggage from the turnstile and boarded the bus, we were all ready for bed. Some students started nodding off during the hour-long bus ride to the university and, as we walked along the echoing halls of the campus and across the courtyard for our tour, we were all walking in a haze of exhaustion. In the furthest reaches of my barely conscious brain I thought about the heat and humidity but, as I tried to orientate myself and find a comfortable position in my bunk, I was more concerned with the 5:30am wake-up call.

I am not my best when forced to operate on four hours of sleep within a forty-eight hour period, but I dragged myself out of bed the next morning, into the shower, and down four floors to breakfast. I mindlessly shoveled something resembling food into my face and then boarded my tour bus where I watched an hour of Beijing go by in the rising daylight. We arrived at the Beijing Garden Expo Park. Twenty-six busses, loaded with twelve hundred students, teachers, tour guides and other staff, gathered together at the outer ring road, and that’s when the heat finally registered. As I exited the bus, I was instantly uncomfortable. I found it hard to breathe or think. My assigned blue camp t-shirt, which was two sizes too small, didn’t help.

On the bus ride between the airport and the university, I told the director I was size medium but, only when I got dressed in the morning did I realize that a size medium in China is not the same as a size medium back in Canada. I looked like a poorly aged superhero that spent more time battling mucho burritos than bad guys. I tried to suck in my tummy for the entire morning, but it didn’t work. With the heat and humidity, it was not my best look.

Once everyone had unloaded, a sea of blue t-shirts punctuated by orange t-shirts worn by Chinese students assigned to make our experience more Chinese and green t-shirts worn by the staff, we hiked up the hill like weary prisoners of war. I think someone started whistling the theme song to The Bridge on the River Kwai. 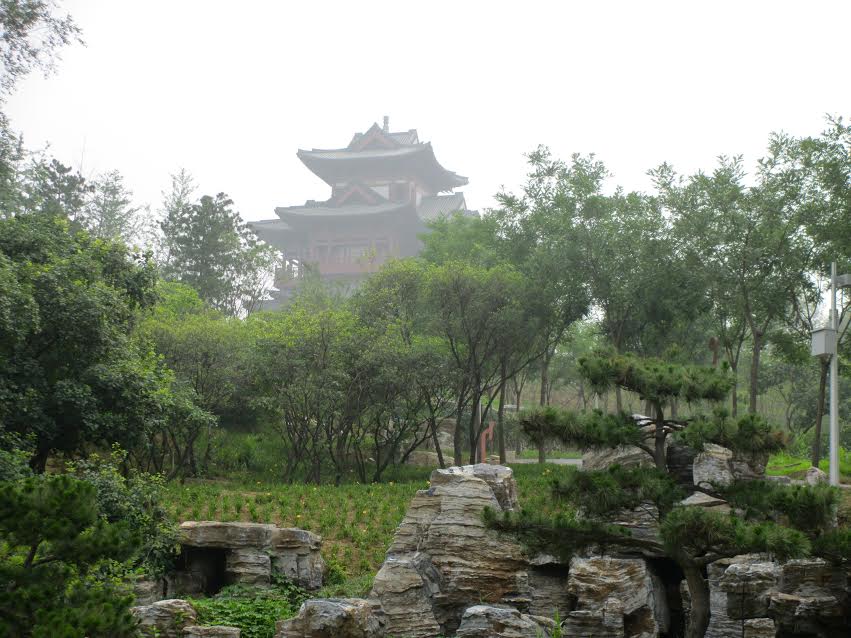 We hiked through the steamy jungle plants that lined the wide walkway and the smog that made everything appear out of focus. The heat, humidity and pollution weighed us down, causing us to shuffle rather than walk. When we finally crested the ridge and found the long wooden benches in the grass at the outdoor auditorium, we collapsed in tangled heaps like clocks in a Salvador Dali painting.

After a long delay, the opening ceremonies finally began and we all perked up a little. The first half-hour featured various groups of young women playing folk songs on traditional instruments. We politely applauded after each song. Then it was time for Chinese opera. That was distinctly unpleasing. It sounded like someone torturing a herd of goats by shoving them into a wood chipper. It was ghastly. It was so torturous I almost forgot about the heat.

The government officials then made their grand entrance. As a convoy of golf carts rolled into view, loud orchestral music boomed from the loud speakers and the Chinese camera crew leapt to their feet. We were all encouraged to start clapping enthusiastically. They took to the stage, waving and grinning, and over the next half-hour each one stepped up to the microphone (with translator) and welcomed us to China before opening the camp. The official flag and official t-shirt were presented, various men and women in business suits shook each other’s hands, and it was all very Chinese. Suddenly, like waking from a bad dream, it was all over, and we were all herded back down the hill.

We were hoping to find the busses waiting for us, with its comfy seats and air-conditioning, but there were no busses. Instead, we walked and walked and walked around the outer ring road of the park, without any hint of what we were looking at, where we were going, or when this madness might end. We walked and then we stopped to count heads, take pictures of pagodas through the smog, only to continued on. We stopped for a bathroom-break when, all of a sudden, someone spotted an ice cream stand. I heard someone yell out, “Ice cream! Ice cream!” and all fifty-four members of our bus group ran down the path waving fistfuls of yuan in their desperate fists. It was a special kind of chaos. 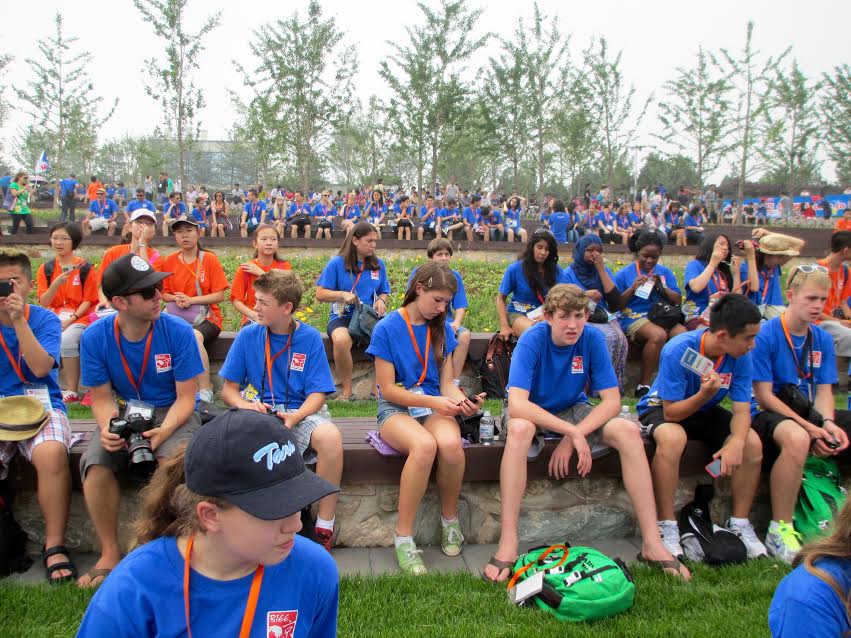 Only half the group managed to buy a frozen treat before the wide-eyed vendor was sold out. With bitter disappointment in their overheated hearts, those still in line turned their backs on salvation and marched on. I almost felt bad for them as I bit into my ice cream and the chocolate sauce dripped down my chin. About twenty minutes later, we found another snack bar and everyone was given ample time to buy something to quench their thirst and cool their internal body temperature. The exhausted, overheated teenagers experienced joy they had never felt before, but at the same time they wondered why on earth they signed up for this.

As we finished our frozen treats, we heard the distance blaring of Chinese pop music. I thought at first it was someone’s cell phone ringing, but a small crowd started to gather near the ring road. The music started to get louder and louder and more and more people gathered. I looked to our tour guide to see if he knew what was going on, but he just shrugged his shoulders. As the first few floats of the spontaneous parade went by, I realized this was unlike any parade I had ever seen. This was a Chinese parade. At first I thought it was a fashion show, as young, attractive Chinese ladies were twirling or waving like princesses on the floats. As the parade continued, I realized this parade was meant to highlight glorious China while referencing its history and future. It reassured us that China always has and always will be glorious. I found it nothing more than sensory overload. When the parade ended, and the crowd broke off, I just stood there, frozen.

I can’t remember how far we had to walk to find the busses. It was a daze of putting one foot in front of the other. I had spent the first morning in Beijing eating food that wasn’t really food, hiking up a hill in the heat in a t-shirt two sizes too small, listening to the horror that is Chinese opera, and then walking around aimlessly before a parade assaulted my senses, and I wasn’t sure how the rest of my time was going to unfold. As the students boarded the busses, I looked up at the sun trying to bust through the impenetrable pollution and unconsciously started humming, “The heat was hot…”

To read more from Chris please visit his website: www.ChrisBrauerWriter.com