We begin Day 14’s Alpine adventure at 08:30 under the magnificent rainbow arches of Milano Centrale Stazione. The route takes us north to Lecco, and then hugs the entire eastern side of the beautiful Lake Como.  At Colica, at the northern end of the lake, we head directly east up the the Adda River valley to Tirano and the Swiss border, arriving at 10:50. The ride will have been quite exquisite, but it’s just the hors d’ oeuvres.

We now begin what is, undoubtedly one of the greatest railway rides there is to be had, anywhere, full stop, end of. We won’t actually be catching the Bernina Express proper. That train has these so called observation cars with totally self defeating arched windows, useless for taking photographs and even worse for letting the Alpine air in. Instead we catch the 11:27 service to St Moritz, which at this time of year has these open top carriages added on (not bookable fyi, but if there’s a large posse of us we’ll make sure that it’s pulling more than one of these).

The train climbs up the Val Poschiavo to the town of that name, circumnavigating the famous circular Brusio viaduct featured on the banner of this blog, and passing along the west bank of Lago di Poschiavo. It is at this point that the fun really starts. Between Poschiavo and Cavaglia, barely 2.5 km apart, we will climb 700m, and do so on an adhesion railway (i.e no cogs or pulleys, just smooth wheels on smooth track). This is achieved via a series of 180° switch backs, although using very little tunnel (they come in part II). The photo above was taken looking back down the valley you’ve just come up.  The line continues to climb up to Lago Blanco and onto the the pass itself at 2,253 metres. You are now simultaneously on the highest adhesion railway in Europe, the highest railway mountain pass of any kind in Europe and the highest point of the Danube river basin. And the highest point of this trip obviously.

This is what it looks like in the spring. The railway runs straight through the middle of the photograph. 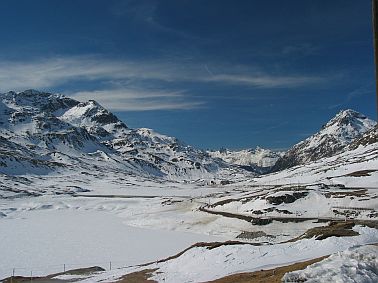 And here’s a photo taken by yours truly a few years ago, from the train, of the Morteratsch Glacier valley. There are jaw dropping views all around you at this point. The click through takes you to my photos of the pass. 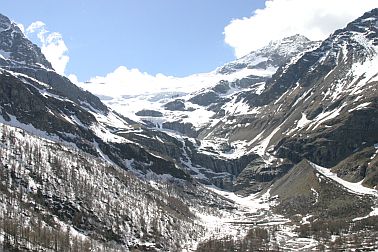 Dropping down the other side, after 2 and a half hours of this spectacular railway, we will arrive at St Moritz at 14:08, on the dot. Not a bad spot for a coffee.

Had enough of mind boggling railways for the day ?. Well hard luck, ‘cos there’s another coming up straight away. At 15:03, at the very moment the second hand of the station clock hits the minute, we will pull out on our journey along the Albula railway to Chur.  While the Bernina Pass was all about spectacular glacial views, and a touch of altitude effect, the Albula will redefine any notions you may have previously held about what it’s possible to do with an adhesion railway.  After following the valley down north east for a few miles, past Samedan, the line then turns north west up a valley and into a three and a half mile long tunnel. In the process we will have left the Danube river basin for the last time now, and re-entered the Rhine.  It is now that this railway beggars belief. Between Preda just on the other side of the Albula tunnel, and Thusis about 13 km down the valley, we will drop over 1,200 metres, or 4,000 feet.  In the process we will complete four 360° corkscrews, and what I will call an “omega” where the line loops and kinks back under itself, as it squirrels it’s way through the Alps. The line dives across a series viaducts over ravines, of which the Landwasser viaduct  is the most famous. But there are several others that just fly straight into cliff walls, then follow a 180° tunnel, and then fly right back out again into the ravine. 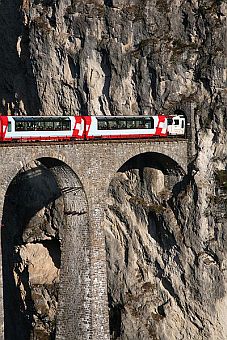 We arrive at Chur, a mile or so from the Rhine proper, at 17:02, and by 17:09 we are off again on the train to Zurich. This is the tightest connection of the whole trip, but it is also probably the most reliable, such is the precision that the Swiss run their railways. We set off north down the Rhine valley then swing  west along the south shores of the Walensee and then Lake Zurich, arriving at Switzerland’s principal city (but not it’s capital of course) at 18:23.

By 18:32 we are on the train to Geneva, travelling south west. We stop at Bern, the only capital on the entire trip that we don’t at least change trains and have an hour or more to say “we’ve been there”, though you do have 6 minutes just to jump on and off the platform, just for the heck of it. We continue south west, following the Aar and Saarne rivers till we eventually roll out of the Rhine river basin and into the Rhone valley and Lake Geneva at Lausanne, finishing the journey at a quarter past nine, right on sunset.