The Festival of the Dead–A Brief History

Imagine a town caught in the 17th century, where its inhabitants live among vampires, witches and the spirit world. Every year around October 31 the town of Salem, MA celebrates what is known as the Festival of the Dead. It is a month long gala to honor those loved ones who have departed from us.

The history of the festival can be traced back to the days of the Mesolithic culture. Note: Mesolithic people are an archaeological term used to describe those believed to have lived between the Paleolithic and the Neolithic Age. The celebration of the dead continues today through myths and folklore; in literature, and art.

The word macabre some believe derives from the Hebrew word “mhkbe” (pronounced Mehakever) meaning “from the grave” Its definition is “ the quality of having a grim or a ghastly atmosphere”. The history of the word goes back to the 14th century where we find a number of works detailing the grim realities of death.

The town of Salem embraces the art and customs of these traditional teachings. October 31, as every school child has learned is All Hallows Eve. It is also the day when the veil between the spirit world and the physical is at its thinnest. This period known as Samhain because it falls on the autumn equinox and the end of the harvest season. There are a number of opinions as to what the meaning of Samhain is in present society. 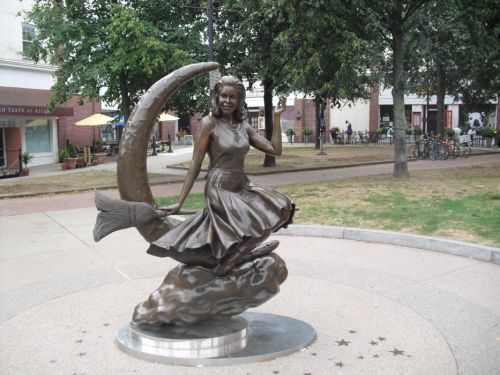 Samhain was a Gaelic holiday held on the night of October 31st to mark the beginning of the winter season. Since this time period commences the darker half of the year it is also believed, by some to honor death. This immortalization has had a profound effect on the culture–both in years past as well as present day. In 873 AD, Pope Gregory IV moved All Saints Day to November 1st. Some believe this was done through the pressure brought by the Gaelic and Germanic race. This movement of the day of remembrance gave birth to the notion of Halloween, trick-or-treating, etc. Whether of not the two had any influence on each other is still mere conjecture.

It is because of that connection though and the 1692 hysteria in Salem we find a number of witches who practice their art (or religion, as some my say). Those who practice occultism and spiritualism today however believe that whatever spell they invoke will come back to those who invoke them three fold. We may surmise by this statement, witchcraft has come a long way from the days of Satanism and black magic. Witchcraft today is more about nature and becoming one with it say those who study the art. In other words, it is no longer the image of an old woman who sits by her cauldron casting black magic on her enemies.

If you care to find out more about this controversial art, venture to Salem MA or visit http://www.festivalofthedead.com for more information.