Let us proceed back to December 16, 1773. On this night, constituents of the Sons of Liberty, clothed as Mohawk Indians would unload 342 chests of tea in what has become known as the Boston Tea Party.

“We then quietly retired to our several places of residence, without having any conversation with each other, or taking any measures to discover who were our associates. There appeared to be an understanding that each individual should volunteer his services, keep his own secret  and risk the consequence for himself…”–George Hewes, A retrospect of the Boston Tea Party: A memoir of George R.T. Hewes, 1834.

The assemblage inside the Old South Meeting House were ready for action. With the residents of Boston in fiery rebellion there was no doubt a spark could cause an inferno. That atom commenced when the Massachusetts governor, Thomas Hutchinson refused to send the British ship Dartmouth back to England. The initial ship to have landed in Boston carrying imported tea from the East India Company docked in Boston Harbor on November 27. By that fateful night in December tempers among the colonists were running with fever.

Samuel Adams, an influential member of the Sons of Liberty headed the meeting at the Old South. There is some dispute, even to this day whether Adams gave the signal for the mob to riot. “Boston Harbor would be a teapot this night.”

At the Boston Tea Party ship and museum relive all the arguments, chaos and patriotic passion the men of Boston touched upon that night. Be witness as you watch Let It Begin Here an award–winning story of how the American Revolution began and ended. See one of only two authentic tea chest from that infamous night. End your stay with a taste of New England food at the museum’s Abigail’s Tea Room. 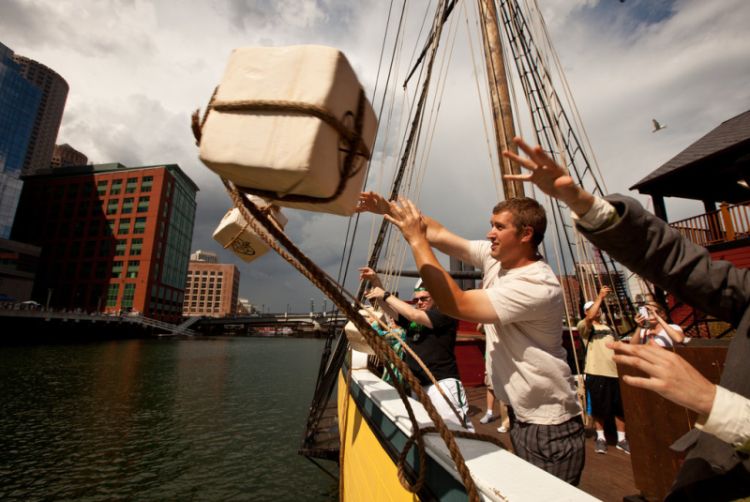 Voted “Best New Museum” by Yankee Magazine, the Boston Tea Party ship and museum is a very special place; where you get to toss Boston tea into the harbor and meet the likes of Samuel Adams and King George III. What better location to begin your visit to the cradle of liberty than where the revolution started.

Located at the Congress Street Bridge, the Boston Tea Party ship and museum is open (in season) Monday–Sunday; 10am–5pm and closes at 4pm out of season. It is open every day except major holidays. Visit BostonTeaPartyShip.com, call (866)466–4438 or come to the museum’s box office.