Stretching one’s legs along the Freedom Trail, located in Boston MA you cannot help but embrace this country’s lineage. The first location of consequence is the Boston Tea Party ship and museum. It is from this sloop, the Beaver–American patriots poured 342 tea caskets into Boston’s port; one of which is on exhibit at the museum. The museum itself is a wonderful scholastic experience. As you ambulate through you will come upon men such as Samuel Adams and George III. You will encounter two women, one a patriot and the other a loyalist. Hear them converse from very different perspectives on the war for independence. Culminate the voyage with the film “Let It Begin Here”. A great and interesting documentary on the hostilities; a must see. 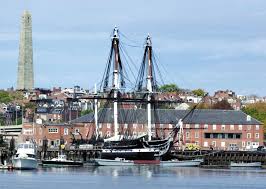 As we continue on our path you will make the acquaintance of such men as James Otis, Paul Revere, John Hancock, etc., all of whom are interned at the Granary Burying Ground, located 83-115 Tremont Street. There are 2,345 grave markers as well as many underground tombs rumored to be below. The tombstones are examples of American funerary folk art. Crypticverses, images of skulls and crossbones Grimm Rippers, and angelic cherubs embellish many resting places. Some even suggest these patriot still roam the Boston area.

In 1816, Paul Revere suspends a bell from the Kings Chapel’s tower. In 1786, Handel’s Messiah is performed for the first time in America. Kings Chapel is the earliest Anglican parish in New England. Constructed in 1754 Kings Chapel is the love child nobody wanted. In the midst of the rebellion an Anglican church is the last thing these men–who were trying to create their own government wanted or needed. England however insisted; they felt the Church of England must be honored and represented. After all, New England still belonged to England and the church must have its proper representation. Today, 40,000 visitors a year arrive to King’s Chapel to witness its history. They stop off at its cemetery where Joseph Warren, an American who met his end at Bunker Hill is entombed. (An interesting tale as to why an American is buried in an English cemetery?) To find out more please purchase Liberty’s Martyr: the Story of Dr. Joseph Warren by Janet Uhlar or visit Kings Chapel at the intersection of Tremont and School Street,Boston.

While we stroll through the city of Boston to discover the history of the American mind, a stop at the Old North Church, is a must. Made famous in William Wadsworth Longfellow’s–The Midnight Ride of Paul Revere. Even though the account is not correct (William Dawes forewarned the countryside while the British detained Revere) the poem gave light to this most important church. Established on April 15,1723 as Christ Church and commonly referred to as Old North, it is the oldest congregation in North America. The architect is unknown but the 513,654 brick structure is believed to be the design of Sir Christopher Wren. The Old North Church is also thought to be a replica of St. Andrew by the Wardrobe church, England.

The Old State House, erected in 1713 to be the seat of English government is now a museum. With artifacts such as Paul Revere’s creative composition of the Boston Massacre this place is a true history buff’s dream. It is here that “…the Child of Independence is Born”–John Adams, 1761. James Otis diatribe against the Writs of Assistants–an 8–hour speech ranting about British entering private homes and buildings without cause, had been uttered here. 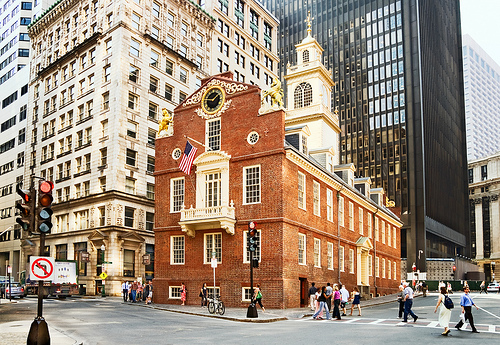 Call upon the Paul Revere house and stumble upon his link to Abraham Lincoln. How did he manage the ride that night, made famous by William Wadsworth Longfellow when there were usually British regulars quartered in citizens home? (The answers, it has been rumored concerns the Revere’s children.)  Revere purchased the home in 1770–age 35, and sold it in 1780. In this home, he fathered 18 offsprings by two wives (8 children with each). If one assumes 16 descendant is a lot, you have to be aware that in the 18 century many youngsters died  early and those who did live needed someone to attend to them. In Revere’s case, he re–married less than a year after his first wife’s passing. The land, on which the house now sits also has a major significance to another epoch in history. The property belonged to one Increase Mather, father of Cotten. These two men, as everyone is aware had played an important role in the witch hysteria of 1692. The Revere House is currently operated by the Paul Revere Memorial Association.

The Old South Meeting House is one of the lesser known historic sites in Boston. While the meeting house does not get much attention it still is a very important structure. The reason–this is  whee the patriots met before departing for that now infamous party in the harbor. It is here Samuel Adams is rumored to have given the secrete signal for the dumping of the tea. It is suggested that up to five thousand men venture from the hallowed hall the night of December 16, 1773. How this many patriots were gathered in a place that had the capacity of 650 is still a question scholar, are pondering.

The Old South, built in 1729 and is officially known as the Third Church of Christ. It still has most of the original construction from its outer layer of brick and mortar to its inside. The bell tower is empty though due to crack sustained while peeling an alarm during the great fire of 1815. It is still a gathering place for lecture, talks and debates.

Boston is full of historical significance. It is in this little region of the country the birth of freedom is born. We must not allow the actions of these men and women, these patriots to be forgotten. Travel, to Boston whenever you get the chance and remember what these noblemen sacrificed for each other and for you. We indeed owe the people of the 18th century “our lives, our fortunes and our sacred honor”. What better location to do this then in Massachusetts–where the king’s peace is always broken. 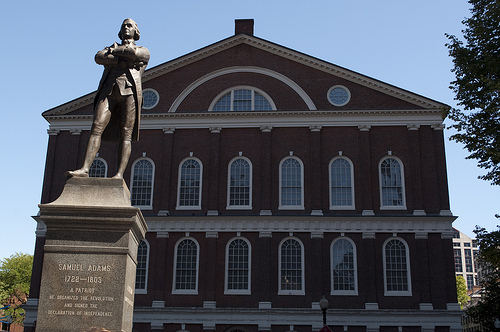