The world is filled with new adventures and holiday ideas just waiting to be tried. Unfortunately, most people refuse to think outside of the box and continue to head off on the same old holiday that they’ve gone on year after year. As the old adage goes, you only live once. Isn’t it time you make the most of the life you’ve been given and try one of these top ten unusual holidays?

1) Audition for a travel-oriented television show. The Amazing Race and Survivor are just two television shows where contestants get to travel to unusual places. Many new reality shows pop up all the time and they all need contestants. If you’re not shy, a tad controversial and have an interesting personality, a reality television show might just be the perfect way to embark on an unusual holiday.

2) Stay in an ice hotel. Several countries, including Sweden, Norway, and Canada, now offer temporary ice hotels, where guests can stay in lodging carved entirely from ice and snow. If you enjoy the cold, then you’ll love to spend the night bundled under reindeer skins surrounded by the ethereal beauty of glistening ice.

Shown above is an image of a suite within an ice hotel.

3) Learn to be an astronaut. Think Space Camp is just for kids? You’d be wrong. Adult space lovers also have the opportunity to learn what it’s like to experience 4 Gs and weightlessness at Huntsville, Alabama’s famous Space Camp.

4) Turtle sit. If you love turtles, then look into becoming a turtle nest monitor for your next holiday getaway. Volunteer programs are available in a number of countries, including Costa Rica, Trinidad and Mexico. See Turtles is one program that helps link volunteers up with turtle conservation projects, but there are a number of others, as well. Volunteers help guard nests and sometimes even release baby turtles into the ocean.

5) Go on a sand skiing holiday. Hate the cold, but love skiing? Consider going sand skiing instead of heading to the oh-so-typical snow slopes. Several countries around the world offer this unusual sport, including Qatar, Namibia and Nicaragua. 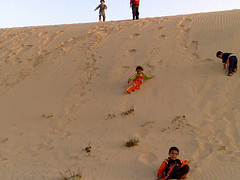 The above shows some children enjoying some sand skiing.

6) Sleep with the fishes. Have you ever wondered what it would be like to live underwater? The Jules Underwater Hotel in Florida sits 21 feet beneath the ocean’s surface. Another underwater hotel, the Poseidon Undersea Resort in Fiji, is set to open soon.

7) Train to be a Navy Seal. If you’ve ever wondered if you have what it takes to become a Navy Seal, then try a week at the Extreme SEAL Experience camp, which was recently profiled in the Washington Post. This program claims to expose its attendees to the same type of treatment that a SEAL trainee would face.

8) Teach English in a foreign country. For people who don’t have a lot of money but have a desire to head off on an unusual holiday, teaching English to locals in a foreign country can be a Godsend. Many teach abroad programs even provide housing and pay.

9) Ride a horse from castle to castle. Feel like a knight of old as you ride a horse across the French countryside from one castle to another with the Ride in France company. Other equestrian holiday companies also offer castle rides, as well. For a really unusual holiday, Equestrian Vacations sometimes offers a ride to haunted Leap Castle in Ireland.

10) Rehabilitate lions and cheetahs. A number of volunteer programs in Africa allow participants to work closely with wild animals. Volunteers with the Naan ku se Conservancy program, for instance, work closely with injured cheetahs and play surrogate mother to baby baboons. All Africa Volunteers has a project that allows volunteers to feed and help raise lion cubs.

Here are a few links to visit to pursue some unusual holiday ideas:

Volunteer in Africa: http://www.allafricavolunteers.com/elephants_lions_reserve.htm or