Tanzania: Safari in the Serengeti

“Head northwest, there is a cheetah and some gazelles nearby,”  Victor, who had been searching the horizon with his binoculars, directed his amiable and able driver Godson.

We were riding in one of the  specially-adapted Toyota 4 wheel drive vehicles on one of our game drives in the Southern Serengeti. We had started on a chilly morning before dawn to get the best light on our photography tour organized by Great Escape Publishing who worked with Top Guides Safaris on the ground in Tanzania.  In many areas of the National Parks in Tanzania, we were not allowed to get out of the vehicles, but we could still get close to the animals and photograph them because the vehicles had been custom-outfitted in Arusha after import. They had hard pop-up tops allowing us to climb on the seats and have unobstructed views whilst being protected from the harsh sun and the animals.  Often, we could shoot from our seats since the plastic side windows could be rolled up (weather permitting). We had six seats for 4 participants in the back, with one of the 2 Great Escape Photographers or Victor riding with the drivers in the front.

We arrived just as the cheetah started to give chase to a herd of gazelles. She had her eye on the unlucky one, grabbed it by the neck and held it for about 7 minutes until it stopped breathing, then rested, breathing deeply herself while keeping watch. In the meantime,  her 2 cubs moved in and violently devoured the gazelle. They ate voraciously for 15 minutes, satisfying their appetites, then sat up to watch while mother took her turn, finishing almost all the meat. The cubs turned their attention to cleaning each other up while vultures positioned themselves in the nearby trees, As soon as Mother Cheetah sat up, the vultures swooped on the carcass, taking only 5 minutes to clean it of any remaining edible morsel. 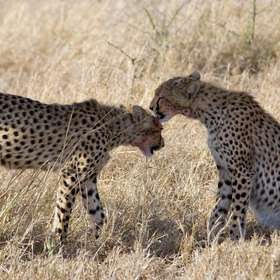 This was just one of many, many experiences our group of 12 had on this trip orchestrated by Victor Nyakiriga who had grown up just outside the Serengeti. As a child he loved the animals and birds he saw when he would visit the Park with his family. He studied  Physics, Chemistry and Biology in Secondary school, and taught English and Math for about 6 months. He decided to go into guiding like his uncle, so attended the College of African Wildlife Management, Kilamanjaro in Moshi. He took a job with a very demanding large guiding company who trained their guides well. Many dropped out but Victor remained to learn everything he could and was eventually given a job interviewing applicants, honing skills which would be valuable when he had saved enough money to start his own business. He was nicknamed “Top Guide” where he was working, so named his own company “Top Guides Safaris.” 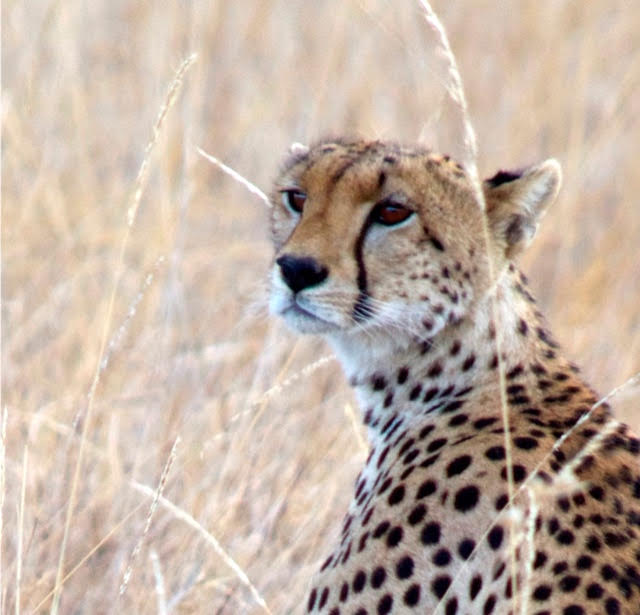 We were on the trail of 2 lions, we came across them lying in the short grass near a creek. The male was fast asleep, the female keeping watch. They both appeared tired, as the sun was heating up the earth. They started walking, close together, with the male marking his territory after another male appeared some 60 feet away beside some tall grasses. We observed them for about 1/2 hour,  after resting, laying close together, they stretched and started walking again. Suddenly the female appeared to be sitting down and the male mounted her. It took all of 30 seconds before they proceeded on their way, and found another spot to rest. The presence of 3 vehicles did not seem to disturb them. 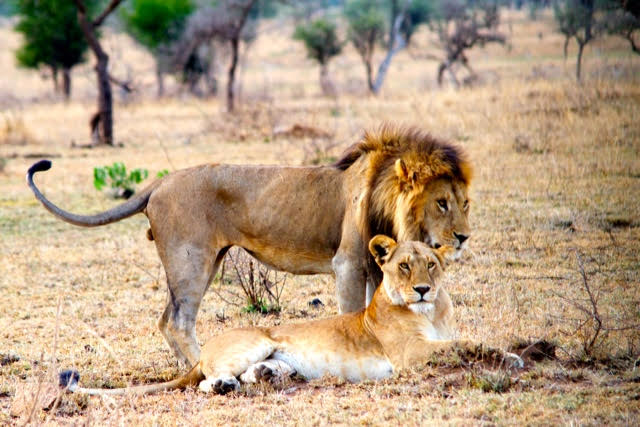 Victor started Top Guide Safaris with just one vehicle and invited Juma who he had worked with, to join him as a driver/guide 6 years ago. All 3 of our guides had an encyclopedic knowledge of everything natural. They were keen birdwatchers, and knew how to position the vehicles to take advantage of the light for photos. Victor shared with me his number one priority when interviewing applicants was their personality. Guides needed to make connections with their clients and be likeable, considerate and trustworthy. Frances, Godson and Juma were all exceptional drivers and guides and had warm personalities. 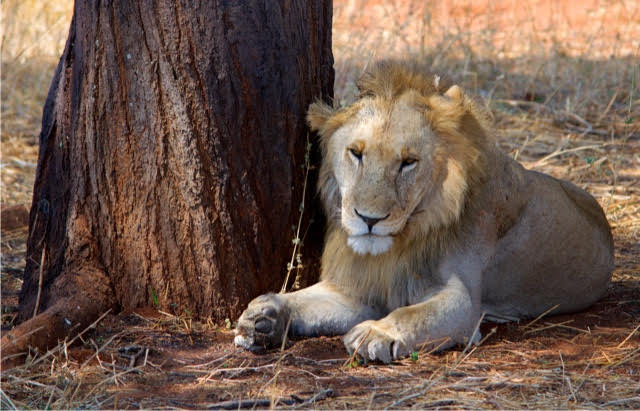 While Victor knows where it is likely to find elephants, lions, cheetahs and many other animals who roam freely in this vast land, he cannot control sightings. He can and does have extremely high standards when it comes to choosing lodges and tented camps. He worked with Lori, the owner of Great Escape Publishing to ensure we had the finest accommodations and food and then relaxed with us, making it all appear effortless, so everyone was happy and enjoyed each other. If you are interested in photography, whether a beginner or a professional, and travelling to Tanzania you will be in good hands if you join a Great Escape Publishing tour or even if you go directly through Top Guides Safaris. They certainly live up to their name and you will have the experience of a lifetime. 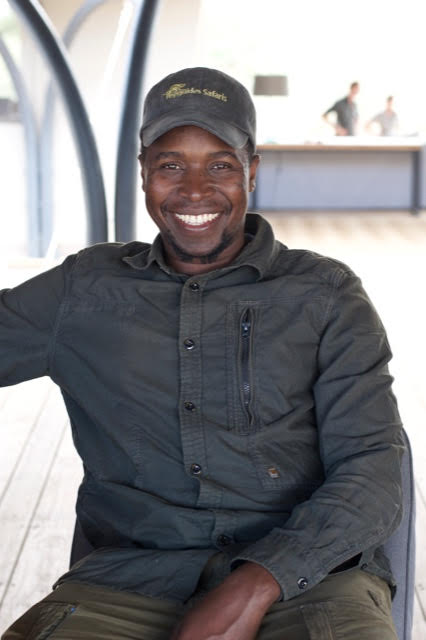