Spain: One night in Valencia

by Dylan Taylor-Lehman
Master traveler Paul Theroux assesses in his book The Pillars of Hercules that the difference between the tourist and the traveler is that the traveler is vague but the tourist is certain. The traveler ambles, knowing that much pleasure can be derived from a lack of plans. Accidentally stumbling somewhere can foster a sense of connection with a place that is sometimes absent when you only have time to see things you’re supposed to see. Mr. Theroux later says that he is usually “vindicated in [his] ignorant decision” not to have an itinerary; and while I hesitate to call anything I do ignorant (ha!), I definitely felt vindicated by the results of having  shirked my non-existent responsibilities in favor of just watching and listening to whatever I could in one of Valencia’s main plazas.
As I happily loped my way to the plaza, I noticed anew the qualities of a cathedral and a painting that I had passed many times before. 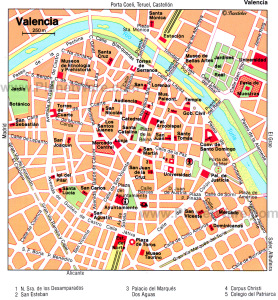 Valencia’s main cathedral, also known as the Santa Iglesia Catedral Basílica Metropolitana de Santa María, is a sprawling structure whose multiple buildings box in an open area to create la Plaza de la Virgen, the plaza where I was perched for the night. The cathedral is not as tall or nearly as gaudy as some of the other more ridiculous Spanish cathedrals, but for believers, its contents certainly trump any architectural flourishes: it houses the Holy Grail. Yes, thee Holy Grail, the cup of Christ, the hallowed subject of much pulp speculation and mythology. Needless to say, I was surprised upon learning this. In all of the interest and controversy surrounding books like the Da Vinci Code, I hadn’t once heard that the physical specimen exists, let alone can be viewed for three euros. Despite many sites claiming to possess the same cup, Valencia’s chalice doesn’t appear to be an unverifiable claim, as a considerable amount of Christian scholars agree that it is in fact the cup used in the Last Supper. Also of interest in the Cathedral is the severed hand of Saint Vincent the Martyr, a grey and mummified relic from one of Valencia’s two patron saints named Vincent. Both the hand and the cup rest quietly in the confines of the solemn cathedral, and to me it seems a slightly anticlimactic reality, for not once have I seen an intrepid scholar-explorer being chased by Nazi mystics or a powerful cult through the foot-fall echoing stone streets surrounding the church.
Continuing around the backside of the cathedral, what appear to be shrieking women or gargoyles leer down from the roof with their mouths/downspouts open to an extreme degree. They look ready to vomit forth copious amounts of water and their fearsome expressions give the impression that they are undertaking some sort of symbolic purge, the specific religious meaning of which evades me. The path curves under their gaze as it joins with the concisely-named Passage Emili Maria Aparicio Olmos, Capellà i Craniste de la Mere de Deu dels Desamparats. Built into the wall along this passageway is a nondescript altar enclosed by mock-ornate metal and glass doors. Two candles sit on top and flanking the altar are two flags. The horizontal surface of the altar is made up of tiles, on which is painted a strangely primitive depiction of what appears to be the Virgin Mary. I am not entirely certain who it represents because while the figure sitting on her lap is likely an infant Jesus, the baby’s proportions make it appear more like a miniature man than a baby. The figure’s head is surrounded by a halo and the man/child is giving the cryptic two-fingered hand gesture common in religious artwork, which makes the whole situation even weirder or more spiritual or both.
The whole point of the altar is to present a painting entitled Sant Jordi en la Batalla del Puig de Santa Maria, any 1237. It shows a battle in Valencia during the thirteenth century, when Catholic and Muslim forces were battling for control of Spain. Like the painting on the tiles, it too is an incredibly enigmatic piece of art, especially considering that the graphic violence it displays to the street. The viewer is placed right into the heat of battle, and it is not difficult to understand which army the artist feels is endowed with Heaven’s blessing.
In the typically gorrific style of artwork glorifying Catholic Warriors, the painting is startling in its violence. The horror of war is evidenced by the almost cartoon-like rendering of a horse screaming in agony, as its suffering is made all the more terrible by the multiple perspectives used to paint its contorted visage. Strangely enough, it is very similar to the wailing horse in Pablo Picasso’s ‘Guernica,’ and anyone who has seen the painting knows how effective surreal depictions of animal distress can be. Another horse lays dead or dying in the lower left-hand corner and its intestines are squirreling their way out of a wound, infinitely creepy as they wave like flagellates. It is of course important to note the hideous, enormous globs of goo (blood?) that drip from wounds on the horses’ flanks as well, if one wants to feel the full effect of the painting.
None of the frank, triumphant depictions of slaughter should come as a surprise, for paintings, drawings, and stained-glass windows abound with butchered Moors. In many artworks and mediums, the white-wearing Crusaders stomp on severed heads, and disembowel, torture, and impale their enemies, usually while wearing serene expressions reflecting their no doubt sincere belief that they are doing their God’s will. This painting is no different; one soldier looks totally placid as the tip of his sword pokes through an enemy’s head as easily and cleanly as a needle through cloth. The impaler stabs with one hand and grabs the robe with the other; his cheeks are rosy and his jaw grey with the permanent evidence of facial hair that can characterize equally benign modern men who are simply waiting for a bus. The faces of the two warriors at the forefront are painted in amazing detail, which provides the main source of eerie contrast between the cartoonish horses and the vivid world of violent men around them 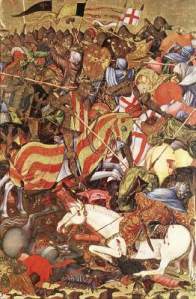 A hammer is brutally raised in the background and there is a shield with a painted scorpion whose metal rivets look like the eye-holes of a masked character – hooded men always look threatening. In the heat of the battle, one Moor is at least painted as if he is exhibiting some resolve though no harm at all befalls any of the Knights; even the bright white and red drapery on the horse is unsullied by the grime of battle. Honestly, the painting is pretty funny – it is so over-the-top that it’s hard to believe anyone would take it seriously, but given the abundance of artwork with identical subject matter, the holy butchery of enemies were in fact celebrated events. It’s not surprising that religious fanatics would revere such an idiotic painting, as all emotions relating to extreme religious devotion, whether they are to worship or to eradicate, likely stem from the same atavistic impulse. This isn’t to say that the Knights are unique with their violent perspective; without a doubt the teachings of any religion have glorified smashing their enemies into oblivion.
Above the shrine is an inscription:

Here, according to tradition, the first Mass of a re-conquered Valencia was celebrated by the King Lord Jaime

Clearly it is a site of historical importance, its history marked by an always-illuminated testament to the methods required to insure future masses. Nowadays, people seem to walk by without paying it much heed or perhaps they have already acknowledged its presence, internalized its teachings, and moved on. And therefore, while a newcomer observes the painting and ponders its philosophy, it’s easy to overhear the conversations and see the occurrences of everyday modern life: cops giving a ticket to a youth who arrogantly parked his scooter in the middle of a plaza; a strolling family whose father asks his eight year-old daughter how the day’s exams went; a rollerblader calmly skating backwards in a figure-skater’s pose, an entertainingly antiquated way to show off. And the icing on the cake is a troop of rambunctious six year-olds clambering all over a set of the basilica’s double doors, shrieking and pounding and playing as loud as possible while a mass is taking place right on the other side.
Like I was suddenly struck by the painting in the altar, I was also aware of many other things as I sat down in the nearby plaza. People were self-consciously carrying skateboards as fashion accessories moreso than skate equipment, and many people were waiting at tables alone, looking at watches in expectation of the people that were eventually to arrive. I hadn’t really noticed the grandeur of the plaza’s centerpiece fountain before, either. It depicts a reclining human representation of Valencia’s Turia River, surrounded by water nymphs that represent the river’s tributaries. The monument it is interesting because of its low-lying construction: its height is only as high as the water deity relaxing on its elbows on a short platform, and because he is lying down and space is needed for the bastion of helpers surrounding him, the fountain is much longer and wider than it is tall.

Looking around and watching what were primarily groups of friends chatting and goofing off, I couldn’t tell if I was happy being alone with my thoughts or if I hoped that I would run into someone I knew. The plaza was a frequent meeting place and many of my acquaintances who lived close by and it wasn’t out of the question that a group of them would burst in with a loud racket of voices from around a corner. All of my people-watching was like a vicarious social life that sparked a desire to be part of my own. Ultimately, I opted not to pay anyone any visits because my previous lack of appreciation for the fountain was thanks to being distracted by said company. Not that I am complaining about knowing people, but I knew I was more than happy to remain alone. 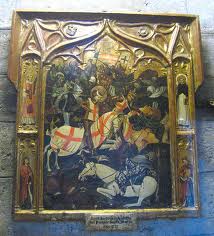 My gaze drifted over a woman at a nearby table and I congratulated myself on being able to tell she was Spanish based on her facial features. She then started speaking Yankee English, obliterating the smug appreciation of my detective work, though I quickly regained composure by noting that they were features I had seen many times in the US; had I concentrated a bit longer I would have noticed this. Directly across the plaza, two women were heavily making-out in front of the cathedral and cops and I cheered them on for sticking it to society, though I quickly realized that it’s important not to loose sight of the fact that everything that a gay person does is not necessarily a political action but can be simply a normal action from normal daily life; not to have every little thing pointed out as either a sin or a calculated political maneuver is something for which the battle for equality is fought: the ability to be left to live a normal life like everyone else; their PDA is/should be funny because it is PDA and not because of who is doing this kissing.
I sat on my step and made completed a couple more visual circuits around the plaza. I was bombarded with various thoughts concerning, among other things: