“Selam,” I greeted Shasha, my guide, who arrived at the guest house where I had stayed overnight. I had arranged a stopover in Addis Ababa (which means “the new flower” in Amharic, the local language) on my return to the USA after a safari in Tanzania. My main purpose was to see Lucy.

In 1974, Donald Johansen, a paleoanthropologist, discovered 40% of Lucy’s skeletal remains in a desert in the Afar triangle of Ethiopia. She has been dated to living 3.2 million years ago, the first hominid who was bipedal, some 3 million years before Homo Sapiens evolved. I had understood the remains were displayed in the National Museum in Addis. In fact they have the remains there, but it is a cast, which is superbly displayed with a history of her ancestors and details of the archeological digs. 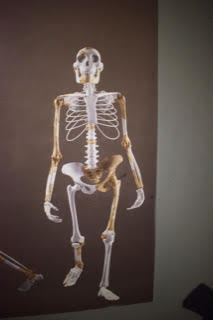 I was also curious about the history of Ethiopia which was only 1 of 2 countries in Africa which has never been colonized. It was occupied by Mussolini in 1935. British troops liberated it along with British Somaliland in 1941. I was aware Christianity came to Ethiopia in the 4th Century A.D. and I wanted to understand its tumultuous history and how it ended up today as the predominantly Christian nation it is. Poverty is still prevalent, but the economy in Ethiopia is growing at an average rate of 10% over the last decade according to the IMF, even though it is the second most populated African country.

Since I only had one day, I did not want to spend half of it finding my own way on public transport or looking for taxis, so I booked a “layover tour” on the internet before I left home. Once there, I realized I had done the right thing. Driving in this city of 5 million people with all the motorcycles, old trucks and unruly pedestrians who spilled over on to the roads was no mean feat and best left to a local with plenty of experience. Eli, the driver, spoke very limited English but he negotiated us around this manic city with great skill. Both Eli and my English-speaking guide, Shasha, were in their twenties. Since I was the only one who signed up for the Tuesday tour, I had their undivided attention. I thoroughly enjoyed my day with them asking many questions about the culture, the history, education, religion and medical services and getting into some interesting discussions.

We started out driving up Mount Entoto, a beautiful eucalyptus-forested mountain on the northeastern edge of Addis. The views of the city were fantastic. At the top, we found the Mausoleum, built in 1934, where Menelik II and other Emperors are buried. It is now a museum and I learned something of the complex history of the country. There is a monastery and a church at this site and at the back, approached over some rough ground, is the Palace built by Emperor Menelik ll (1844 -1913) and his Empress in 1883. It has mud walls and a thatched roof. Later in his reign, he was credited with bringing Ethiopia into the modern age. 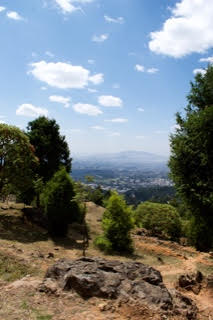 His namesake, Menelik I, who reigned some 18 centuries earlier around 950 B.C., is said to be the son of King Solomon of Israel and the Queen of Sheba. When his mother died, Menelik I succeeded her and became known as the “King of Kings” of Axum. He is reputed to have visited his father in Jerusalem and brought back the Ark of the Covenant, with the 10 commandments inscribed on 2 stone tablets, to Axum (also known as Aksum). This is still shrouded in mystery as the St Mary of Zion Cathedral has been built where the Ark is believed to be and only one person, the keeper of the Ark, is allowed to see it. The governments have not allowed verification over the centuries. Back in the city, we visited the Ethnological Museum, describing more of the history of the country, which is located in Haile Selassie’s palace on the attractive campus of the University of Addis Ababa. Haile Selassie (1892 -1975) was Emperor as the Italian occupation was sweeping south in 1936. He fled into exile with his Empress just 3 days before the Italians entered Addis and declared they had annexed Ethiopia. Haile Selassie addressed the League of Nations just a month later, and became a prominent international statesman while in exile. He is credited with initiating The Organization of African States.

We went to a local place for lunch – It was one of a number of huts side by side on a road. There was a wooden step up from the deteriorating sidewalk into the narrow tin- roofed hut. At the entrance, a girl performed a traditional coffee ceremony with a jebena, a clay pot with a long spout and a handle, used for brewing the coffee, which is poured in and out of another container to cool it. Ethiopia is the birthplace of coffee beans and claims to grow the best in the world. 2 steps further inside, there were 2 long benches and tables on the left and one on the right on the dirt floor. It was lit by 2 bare light bulbs hanging from an electric wire down the length of the hut. We climbed in behind one of the wooden picnic tables with a plastic tablecloth on it. Shasha and Eli conferred and ordered a spicy rice dish from the menu. There was a boom box playing pop music and only one other local at the other table.

Onto the National Museum, the highlight of the day for me. The architecture of the building was impressive with Italian influences and lovely gardens. Lucy and the anthropological exhibition were down a flight of stairs, beautifully presented in glass cases. We chose not to explore the upper floors of the museum, but returned to the car to go on to the famous market, Addis Mercato, the largest in Africa, which sprawls over many blocks.

We never found anywhere to park and Shasha was leery of getting out of the car for safety reasons. He said there were a lot of pick pockets and unless I saw something I really wanted to buy he would prefer we stay in the car. I never felt unsafe at any point in the day, but I respected his opinion. People were everywhere, selling a tremendous variety of items, from kitchen equipment for restaurants to hats, fabrics, toys, plastic kitchenware, live chickens, meat, baked goods, fresh vegetables, charcoal, clothes, furniture and of course, coffee beans. We drove around and around, getting stuck in traffic jams every 2nd block, where we negotiated around delivery trucks, hand pushed barrows and other cars. The sheer size of it was amazing, the rainbow colors of the stacked plastic chairs, which are ubiquitous in the city, the smells of barbecue filling the air from an antique black smoker, and the mass of people, dressed in everything from long white robes to t-shirts and jeans, created an eclectic, bustling atmosphere.

We also visited Holy Trinity Cathedral built in the 1940s to celebrate the end of the Italian Occupation and to provide a burial site for some who had resisted the Occupation. Emperor Haile Selassie and his Empress are both buried under the chancel there. It is the seat of the Orthodox Archdiocese of Addis Ababa. 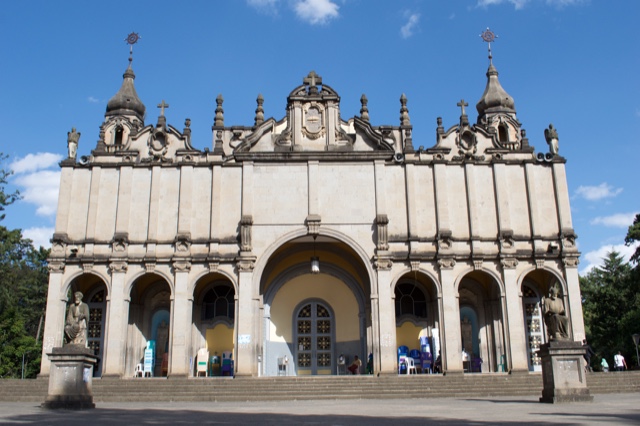 We had some spare time and the young men were hungry and thirsty again, so we went to a cafe and I treated them to Samosas, Indian vegetables deep-fried in batter, and a coke. We enjoyed just relaxing together and talking even though I was old enough to be their grandmother.

The traffic was getting worse, as the afternoon turned to evening and dusk fell. It was chaotic, with cars, motorcycles, trucks, overcrowded shared blue/white minibuses, which are the nearest the city has to a bus system, and people crossing streets all over the place –  traffic signals seemingly an irrelevance. I was glad that I was not driving. Some of the shops or bars on main roads sported bright lights, but on side streets it was pitch black except for car lights. Boom boxes in cars or bars blared out a variety of music styles from jazz to pop to Western or traditional music – Ethiopians love rhythm and dancing.

Our last stop was at a tourist style restaurant where they seated us, as well as many, many others in square chairs close together, 4, 6 or 8 clustered around a small coffee table which was where the round 18” to 24” diameter platters were placed. On them were huge injeras, the classic Ethiopian spongy brown pancake, topped with small piles
of spicy chicken, beef, curried vegetables, and potatoes as well as different sauces, some very hot. There were no utensils. It is customary to tear off some of the injera and collect samples of the meats or vegetables and choose your sauces from the platter which everyone in your group shares. It was delicious and they provided far more than we could eat. There was an open bar and I tried the local beer which was light – it tasted like my favorite lager. There was folk dancing or musicians playing traditional music on stage to accompany our dinner. 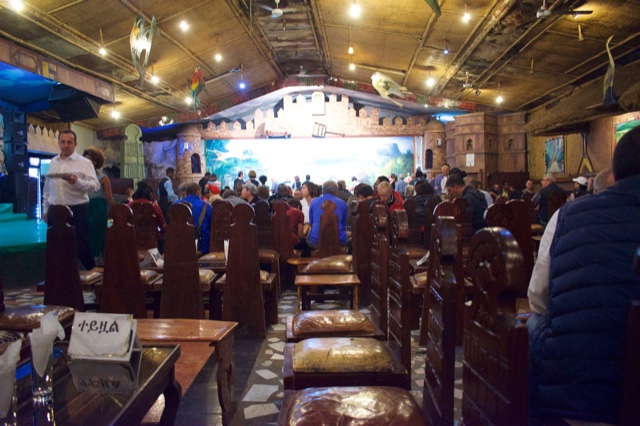 Eli and Shasha took me to the airport at 9 pm in good time to catch my 12.15 am flight to Paris after a wonderful introduction to Ethiopia. I left with the desire to return and explore more of this fascinating country.

Or you can book directly with: www.amanethiopiatours.com but that site is not secure.