Snorkelling with the Galapagos Sharks

If a snorkel wasn’t plugging my mouth I definitely would have screamed. The eerie eye of the shark looked directly into mine. A wave of fear started to rise within, making my stomach flip-flop. Instantly saying a silent prayer for him not to bite my outstretched hand holding the camera. After noticing he wasn’t making a meal out of the small school of fish that swam in front of  him, I relaxed and felt a little safer.

Snorkeling the lava tunnels (los tuneles) off Isabela Island in the Galapagos is a tourist favorite. Yet not one that I instantly signed up for. The thought of swimming with sharks terrified me. Only after asking myself if I would regret not doing it, I signed up.

After a 45 minute speed boat ride, we arrived to a lava created oasis full of a multitude of marine life. After passing a eagle ray to our docking area, I had no hesitation jumping into the mint green water. Anxiously looking about me in this new world.

As the group makes its way to the tunnels; sea turtles, an assortment of rays and countless fish are discovered. The excitement makes it easy to forget that sharks swim these waters too. 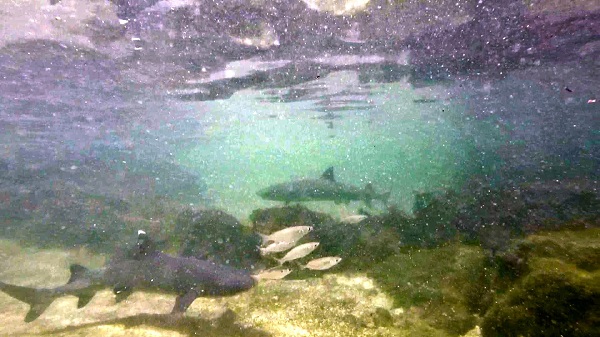 Twenty minutes into our excursion, after making our way single file through a narrow canal, we found ourselves perched on a shallow lava bed, looking down into the powder blue water. Three white-tip reef sharks could be seen. No one offered to be the first one in. The Captain grabbed me by my wetsuit and hoisted me forward. Looking about me trying to locate the sharks I noticed two leaving through an opening. The third swam behind some rocks, emerging near my right side. The feeling of being evaluated came over me, since his eye never wavered off me as he glided by within a foot of my outstretched hand. Trying my best to control my emotions, I held my breath and tried my darnedest to slow my heartbeat. Afraid he would sense my fear and attack. After he passed by, panic turned into elation. I wanted to shout “I’m alive!”

Our guide lead the group into the same gap the sharks disappeared through. Unbeknown to me, leading us straight to the mouth of their cave. Finding myself in an argument with the saner part of my brain, I summoned up the courage and decided to look in, knowing this is probably a one time chance. Enough sunlight came through the other side to see a pod of 9 sharks, each between 4-6 feet long. Most were lying on the sandy bottom. One swam back and forth, giving me the feeling I was in a forbidden area. Quickly the necessary pictures were taken for proof of bravery. Then the flight response took over and I headed for safety.High five’s were passed out amongst us once we were all back on-board.

The 5 hours excursion, offered at all tour shops, is just $80 including gear and a sack lunch. The tour consist of two different snorkeling destinations, then  to a protected area to see the blue-footed boobies nesting ground. If it’s Winter, take a sweatshirt with you, the ride back can be cold. Of course, don’t forget your camera.