Shangri-La, China: In The Land Of The Yak

An unexpected invitation to tea, opens a door to a different world.

The old man plodded along the long narrow road. His shoulders were stooped. His head down. His woolly hat jammed tightly over his ears as if pulled on in a fit of pique. Lopsong, our guide/driver, pulled over and spoke to him. Suddenly he was climbing into the car and sitting next to me on the back seat. His brown cordoroy trousers were threadbare; his olive green jacket stained with white powder and black and fraying at the cuffs. Lines around his eyes and mouth etched deep gullies into his face and whiskers dotted his chin. He smelled of tobacco and old millk and looked as if he had nothing in the world. Then Lopsong announced, ‘we’re going to drink tea at his house’.

A large gateway set into a high wall loomed before us. The man pushed the gate open and ushered us into a huge courtyard. A Tibetan mastiff dog barked loudly and yanked at his chain. Pigs squealed and chickens clucked and strutted. Half the courtyard and much of the ground floor of the immense two-storey house was the domain of the animals. We were shown up to the first floor, into a cavernous room, dark, cold, and almost totally empty. A richly carved ornate wooden cupboard filled most of one wall. A wood burning stove took up one corner. For the rest – nothing. ‘This room is used for important occasions’ Lopsong told us. Next door we were shown the temple room. Every Tibetan house has one of these. More gloriously carved wood, warm and red in colour, an image of the Buddha, seven bowls of water lined up in front of him, dusty leather settees arranged against the walls. More homely, but this was not yet the heart of the house.

Downstairs, we were taken into what was the living room in every sense of the word. Sunlight streamed across the wooden floorboards, and another wood burner gave off a great heat – warming us literally and figuratively. Again the room was quite bare. Two huge cupboards, filled with all manner of things, book-ended the room – toilet rolls, an electric rice cooker, a bottle of Sprite, a packet of cakes; no order, all haphazard and thrown anywhere. One wall, was decorated with bright colourful paintings, patterns and flowers. A single electric light bulb hung from a beam in the middle of the room. There was no clock. There was no noise, just the spit and crackle of the burning wood. Peace reigned. 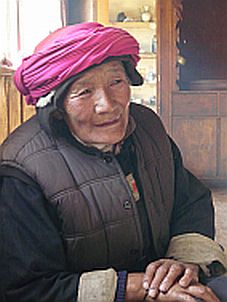 The man’s wife appeared and it became clear we were to sit and make ourselves comfortable on the bench seats next to the stove. We settled happily onto the faded cushions. The old woman laughed, her face as lined as his, her smile revealing jagged teeth. A shocking pink scarf tied around her head over a Biggles-type hat was the only splash of colour amongst her brown and dark-blue clothes. She sat on a plain, tiny wooden stool in front of the stove and busied herself making yak-butter tea. Balancing a long narrow churn between her knees, she added a teaspoon of salt, a thick slice of pale tangerine yak butter, and then pouring on the boiling tea, she churned it all together, mashing vigorously with a long stick. She carefully wiped blue porcelain bowls with a little bit of tissue, before pouring the tea through a strainer and handing the bowls to us. Pale, almost white yellow, it looked like chicken soup, thick in texture. It reminded me of melted white chocolate but with a slightly sour taste. The old lady was keen for us to enjoy it and was already busy making a second batch. Her husband meanwhile, had placed bowls of ground barley powder and a plate of yak cheese on the hearth. ‘Eat,’ they gestured, ‘eat, eat’. He’d sprinkled sugar over the cheese ‘because it tastes a little tart’. The cheese was rich, creamy, full, pure white, with a dark ribbed edge. Good, smokey, but heavy on the stomach. They couldn’t give us enough, constantly motioning that we should eat and drink more, or would we perhaps like something else?

With Lopsong acting as our interpreter, we learned something of their lives. The man’s family had lived in the village for generations – he could only tell us ‘very long’. The couple had two sons and one daughter and shared the house with one of their sons and his family. Evidence of the grandchildren was everywhere, pink slippers and Mickey Mouse backpacks. Far from having nothing, the man was quite wealthy. He owned forty-eight yaks, sheep, cows, chickens and one horse. He grew potatoes, barley, radishes – just for his own use. Sometimes he sold a little yak butter or cheese at market. Looking around we saw a TV, and a fridge – and wondered how he’d managed to buy these things. We were told that the villagers could make good money selling a rare wild mushroom that grows in the valley – a kilo will sell for Yuan 800 (about Euro 100). They lived well. We told them that this was the warmest we’d been since arriving in Shangri-La and the old lady said she felt a little sorry for us.

The door burst open, and the grandchildren rushed in, followed by their parents. Another lady constantly pointing to our stomachs and asking if we’d like something to eat! The children sat on a stool opposite us and stared openly. Reluctantly we decided it was time to leave. We offered our thanks and took our leave, as the whole family stood in the gateway smiling and waving us goodbye.

We made this trip with Trawa Gebo International Travel Co. Ltd in Shangri-La and paid Y130 p.p. The trip lasted approx 3 hours. Lopsong was our guide and driver.