Serenissima: Venice, the most serene

Stepping off the train onto the platform, I struggled with my luggage. A woman sitting on a bench across from me choked down the last few puffs of her cigarette before flicking the butt away and I cringed at her broken smile. The air around me was thick and my t-shirt clung to my back with sticky sweat. After swinging my pack over my aching shoulders, I followed the herding crowd to the double doors that opened to the streets. On the other side I squinted against the sun’s bright light and blinked again and again until I’d adjusted to the world around me. What I saw was no Western city, no buses, no sky scrapers. Instead the bustling streets that I had grown accustomed to were replaced by winding waterways, lengthy canals, and a steady thrumming from the engines of the boats that cruised down the waterways. 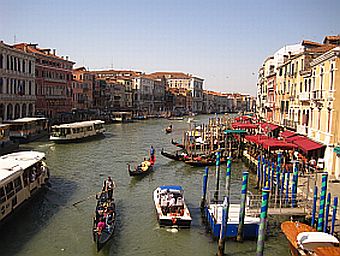 Stepping onto the Number 1 boat I took in the city that surrounded me. Merely floating on the tepid waves, the entire city crammed together in an enchanting collage of color. Peach washed apartment building walls lined the canal with their hanging flower baskets over flowing with spiralling vines and violet buds. My eyes drank in the warmth from the setting sun with a satisfying gulp and I couldn’t help but sigh with regret as the city darkened, the last image, the silhouette the Rialto Bridge.

The water sloshed onto the dock with my leaving the ferry, and I could feel the night’s chill sweep in off the canal. After dropping my bag at the hostel, I took to the streets that had just begun to wake. Music buzzed along the alleyways, and I could feel its rhythm tickling my skin. I turned left, then right, then left again, until the sweetest smell enveloped me in a drunken haze, and it was then that I surrendered to a white and red checker table cloth and a place setting for one. I sat down and watched the gondolas float lazily down an open passage, and watched as lovers skipped over chipped and worn cobblestone. When the waiter approached me I panicked, not having properly studied the menu, I was lost. I turned my instincts, closed my eyes, and pointed to the first thing I saw. He beckoned me to view the wine list and I shook my head, not. 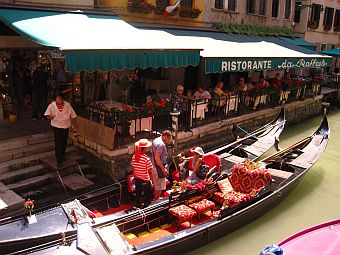 Instead I watched this ancient city glide gracefully through the night as if a painting moving in its frame. I could feel the electric energy of the people through every nerve ending in my body and couldn’t help but float on this high.

When my order reached me I gawked at the tabletop size of the steaming pizza I had ordered. With greedy eyes, I pulled apart a piece of the soft dough and bit into the melting cheese. The basil pampered my taste buds as the fresh mozzarella rolled down my throat. Soon after my love had begun the waiter approached me. With a mouthful of everything good in this world, I managed to string together a few incomprehensible words, “So, how’s about that wine?”