Given the mountainous and beautiful terrain traversed during the road journey, the actual distance travelled on a bus is nearer 300 kilometres. Including a few rest stops, immigration formalities to exit Serbia, and enter Bosnia (two independent nations), the entire journey takes almost eight hours. A long, but manageable and thoroughly worthwhile ride. 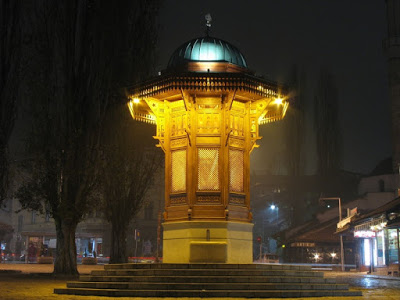 Although the Bosnian countryside is spectacular especially when seen from such high vantage points, it is the pervasiveness of graveyards, large and small, dotted across Bosnia which one finds striking. The cemeteries are a reminder of the horrors – and massacres – of the Yugoslav civil war of the 1990s. As recently as October 2013, a mass grave believed to contain over one thousand bodies was found near a village in Northwest Bosnia. The highway from Belgrade takes one through fairly typical yet quintessentially picturesque European countryside. It is only closer to the Bosnian frontier that the landscape becomes more mountainous. Sarajevo proper is situated 500 meters above sea level in a valley of the Dinaric Alps.

The bus curves its way up mountains on narrow roads until it begins its descent again. (Travellers prone to motion sickness or suffering from fear of heights may wish to carry ginger and / or sleeping pills!)

There is a sense of excitement about entering Sarajevo after hours of driving in sparsely populated rural areas, and entering civilisation after wandering about in a comparative ‘no man’s land!’ 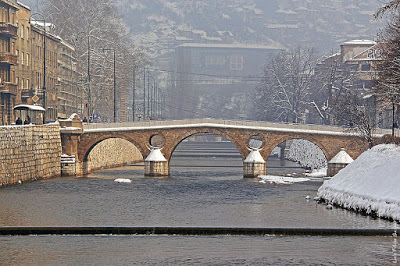 The Latin Bridge across the Miljacka River. The bridge was the site of Austrian Archduke Franz Ferdinand’s assassination in 1914, an event which precipitated World War One

Moreover, Sarajevo is a city of hills with narrow streets and lanes. A great city for keeping fit as walking – even a short distance of a few hundred meters to the nearest tram station – requires negotiating steep inclines. There is also a medieval, ‘stone houses and cobbled streets’ atmosphere within Sarajevo, nowhere more so than in the Baščaršija Square located in the old town. From first glance, one realises that Sarajevo is an old and unique city. Europe but still not quite Europe: more Europe than Istanbul, but as Ottoman as any Turkish city, especially in architectural terms.

Sarajevo is a must see city for any traveller – a city of functioning synagogues, cathedrals, and mosques; and which recently hosted Pope Francis. Sarajevo is also a city which until relatively recently (at least for historians!) was tragically plunged into despair, despondency, and horrific violence perpetrated on religious and ethnic lines.

In so many ways, Sarajevo personifies the best and worst of human nature: a city of tolerance, peace and harmony and yet also a city haunted by its recent past which bore witness to unspeakable atrocities.

Imran is an adventurer, blogger, consultant, guide, photographer, speaker, traveler and a banker in his previous life. He is available on Instagram (@imranahmedsg); twitter (@grandmoofti); and can be contacted at imran.ahmed.sg@gmail.com.