My driver, James (it was early season – June , so it was just the two of us in the Jeep style transfer mini bus) averaged 100-105 kph regardless of whether we were on the , or gravel tracks. He was constantly flashing his lights in the middle of the day, apparently to tell people, “a lunatic driver was approaching.” Well quite. The hairiest moment was en route from my beach hotel in Mombasa to our base for the safari. It was only 6.45am but there were plenty of people around. A van pulled out to overtake going into our side of the road; James, who has seven children, took evasive action or “defensive driving”, as he called it, as he veered completely off the road for about 100 metres. It was incredibly fortuitous that there was no-one in the vicinity of his run off area, or it could have been very messy. After that I put my seatbelt on. 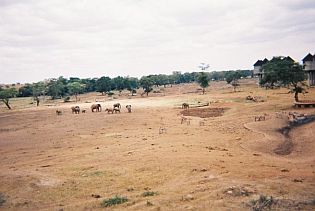 The transfer from my hotel, the excellent Pinewood Resort, to the safari base in East Tsavo was around five hours. The lodge is best described as elevated mushroom shaped huts in the middle of the wildlife park.
The safari itself was no walk in the park, so to speak. The best time to see animals is early morning and dusk, so it was up at 5.50am everyday. We saw elephants, well I was woken up by them most mornings as they came to drink at the spring at the lodge, giraffes, hawks, eagles,wildebeests, buffalo,zebras, monkeys, hartebeast and many many more.

Into the final day though, and our very pleasant group of myself, a Scottish honeymoon couple and a Maltese couple, were still on a quest for the so-called, “elusive ones,” as James our fantastic guide imperiously called lions and cheetahs. The first two sightings had turned out to be a baboon and a log, but on day three we saw two lionesses prowling deliberately through the grass, completely oblivious to the two safari trucks  – you could see why they are jungle royalty. We also saw a male and female lion “on their honeymoon”. Here it is enough to say that it was bordering on barbaric and leave it at that. 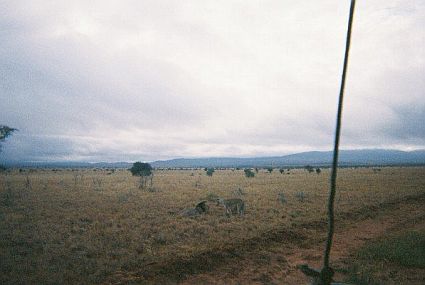 The local tour company Pollmans also arranged a spectacular breakfast on the mountainside overlooking the wildlife park. (Although the food was possibly not cooked as well as it should have been). They also arranged champagne and drinks, while we watched the sunset behind Mount Kilimanjaro, before the night safari, which were all splendid touches. The service was first class.

The Pinewood runs local tours and puts on nightly entertainment. It is worth noting that the dancers do not get paid by the hotel, the only money they make is if they manage to sell any of the assorted handicraft, jewellery, throws and others crafts at the end.

The tour lasted a morning. The safari style bus drove with the top open, through poorer areas and villages en route to a local school. Children happily run alongside and wave, so bring some sweets to throw. The adults sitting outside their homes or stores are less appreciative of tourists peering out of their safari truck’s roof, and the looks were quite uncomfortable and I felt intrusive. Also on the way to the school, we stopped at bank and a man was passed out on the pavement with people, including police, freely walking by him. Our guide explained this was a common local disease and would last half an hour before he woke up.

The school visit was very emotional. The children looked full of joy and happiness as they ran to class, it was truly humbling. I certainly never looked that happy at school. Given the almost complete lack of stationary, books and standard teaching equipment, I found this all the more amazing. The children were packed three to a bench meant for one or at the most two. The teachers, who I felt could have done without our presence, taught using songs, and the emphasis was very much on fun. As we pulled up to the school we noticed that many children were going home, this was apparently because they had to bring the equivalent of 25p a month for fees and some who could not afford it were sent home. Give generously.

We were also escorted to a local village and treated to more music and dancing in exchange for buying gifts. By the end I started to feel quite embarrassed by the assumption I needed entertaining to purchase, but left inevitably with far more gifts than I intended. The dignified warmth of the people particularly struck me.

A quick word on the Pinewood Village which is a popular and excellent choice for couples or groups. The staff are friendly, the food excellent, the rooms clean and wonderfully decorated and the gardens and pool area are tended to perfection.

Kenya is a glorious country and as our guide James asked me to do so I am imploring you to visit it.

Time to go: June – August. It is a tropical climate near the equator so is very very hot in the sun but the occasional showers do freshen things up.