Rocks, Ruts, and Rivers: On the Road to Askja

I have driven in many of the world’s most intimidating cities, across some of its most hostile terrain, and through its bleakest weather conditions. Each time, occasionally more by luck than judgment, I have emerged unscathed – and with one more story to tell.

So why was I plagued by a nagging anxiety before starting off on a mere 90 kilometer (56 mile) drive through Iceland’s Highlands region to the Askja caldera? 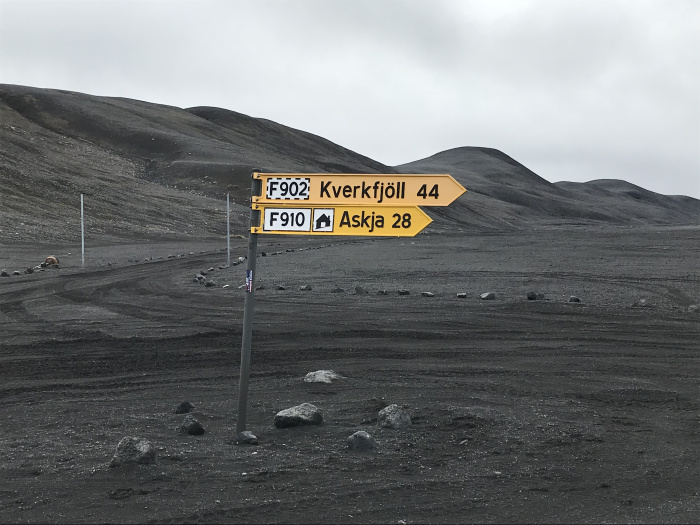 I wasn’t concerned by the torrential rain that had disturbed our night of car camping at the Möðrudalur farm, or by the forecast for snow – yes, snow, in July – at our destination. I also wasn’t particularly perturbed that our chosen route traverses a barren, lifeless wilderness that made it the training ground of choice to prepare Apollo astronauts for the moon landings.

My trepidation had but a solitary source – the river crossings.

Featured on a hundred postcards, Askja is a frequent inclusion on the list of must-see destinations for visitors to Iceland. However, as soon as they read about the logistics and dangers involved in getting there, many abandon the idea and stick to the safety and comfort of the ring road.

The undeterred face a challenging journey along spine-jarring tracks that rock your car – and your head – in all directions for three hours. It is not for the timid, the impatient, or the unprepared; preparations that start with seeking local advice about the conditions ahead.

Now, it has to be said, Icelanders are not the most demonstrative of people, but what they lack in effusiveness is more than offset by an eagerness to help anyone who needs it. Most importantly – particularly when it involves roads or weather – they know what they’re talking about. It’s as if they all have to take a weekly test.

While it is essential to listen to what they say, it is also necessary to bear in mind that Icelandic opinion of what constitutes an easy drive has been formed while navigating the cavernous potholes of their various unpaved roads; a world in which tarmac is a decadent luxury.

So, when we were told that it is not possible to reach Askja on any route without having to drive through a few rivers, all I saw were images of a small car with a frantically waving Englishman inside, drifting away down Yangtze-wide water.

But the thought of not attempting the journey never crossed my mind.

To reach Askja, we would follow a combination of routes F901, F905, and F910. Heading east on the F901 from Möðrudalur, it is three kilometers to the top of route F905. At that point – and contrary to what the sign at the start of the route indicates – a further 87 kilometers separate you from the VatnajökulsÞjóðgarður National Park visitor center at Dreki; the gateway to Askja.

Although heavily rutted in places, the first part of the route was in relatively good condition and allowed us to make good time; it even included a couple of stream crossings. I was briefly tempted to call them rivers and congratulate myself on a job well done until, at about 30 kilometers, we turned a corner – and came to an abrupt stop.

We had found our river. 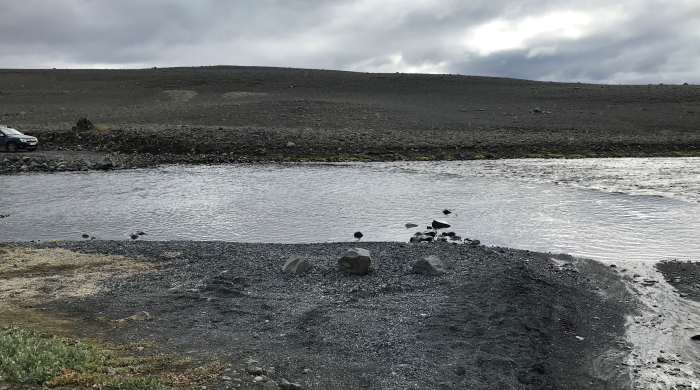 At least 100 feet (30 meters) from bank to bank and appearing far too deep for a standard 4×4 car to successfully navigate, my immediate reaction was to consider that today’s adventure had reached its end point.

Encouraged by my wife, Sarah, to check the depth, but more in an effort to validate my conclusion than in any serious attempt to introduce a contrary opinion, I was soon wading into the frigid water, boots and socks behind me. Remembering her advice – “If you wouldn’t walk through it, don’t drive through it” – and with the river already up to my knees after a couple of steps, I had all of the evidence I needed. This is where we would turn around.

I returned to the car and stared defiantly at my nemesis; my thoughts flitting between confidence and doubt. Each time confidence threatened to gain the upper hand, the prospect of awkward and ultimately expensive conversations with a stern-faced rental car company manager gave fresh momentum to my doubts.

I couldn’t do it. We wouldn’t be going to Askja today.

However, within a minute of starting to head back to Möðrudalur, a cloud of dust in the distance announced that two cars were coming towards us.

“Let’s watch them do it,” Sarah said. “Then decide if you want to try.”

We turned around and, as if politely holding open a door, invited them to go ahead. If anyone was going to get stuck in the river today, the decent thing to do would be to give someone else the chance to be the first.

Both cars made the crossing successfully (although the first combined brute force, speed, and ignorance with almost terminal consequences) and gave us a route to follow through the river.

But my thoughts were still a contradictory mess. Yes, I had just seen two cars drive through the river, but that didn’t change the fact that I had never done this before. I continued to stare nervously at the river; trembling at the possibility of failure, but with an increasing resolve to succeed. Witnessing my dilemma, Sarah (always quicker to identify signs of my inner struggles than I am to acknowledge them) calmly helped to quiet my lingering fears.

More importantly, she’d done this before. And to underline the fact that she knew what she was talking about, the cars that had just reached the other side followed the exact path through the water that she had pointed out to me half an hour ago.

With an, “OK. Let’s do this,” the car started rolling towards the river.

As if preparing for total submersion, I took a deep breath, secured a vice-like grip on the steering wheel, and eased the car down the bank and into the river. Keeping a slow but steady pace, I steered in an arc towards the exit point. Within 15 seconds, we were driving safely up the bank on the other side – my exhaled breath misting the windscreen. Slowly, I prized my fingernails from the steering wheel and my pulse rate started to normalize – just in time for the next crossing.

Amid the euphoria of recent success – and now contemplating a river narrower and shallower than the one before – the biggest risk was over-confidence. The presence of a few spectators also added an element of performance anxiety, but we were soon navigating the remaining, river-crossing-free distance that remained between us and Askja. 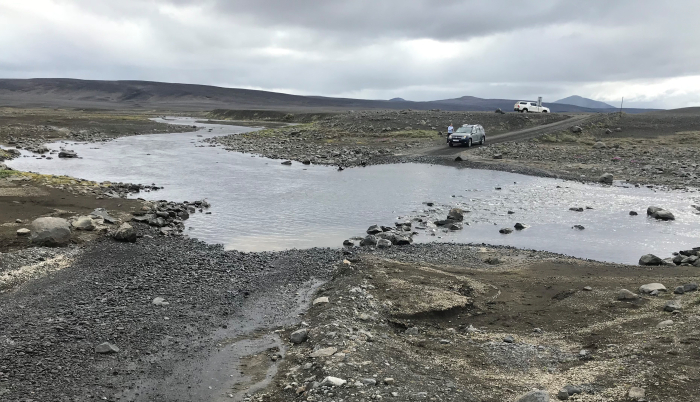 Although there are two further rivers on this section of the route, both have single track bridges. After the second, a National Park ranger flagged us down to check our travel plans and to provide information about the route ahead. He wasn’t lying when he said it would be slow going – and was probably still within earshot when we slowed to a walking pace to navigate between, around, and over axle-breaking rocks. A little farther on, the rocks were briefly replaced by deep volcanic sand – but at least the swerving path through the sand provided a smooth respite for our aching spines. 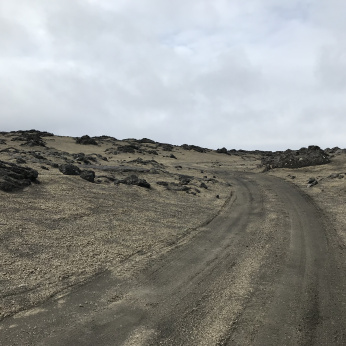 Almost exactly three hours since leaving Möðrudalur, we arrived at the Dreki visitor center. From there it is a further eight kilometers along a rough track (with a couple of small water crossings) to the parking area where you start the walk to Askja. It is a walk that seems considerably longer than the advertised 2½ kilometers – but, after what you’ve put yourself through to get to that point, nothing short of a volcanic eruption is going to deter you from reaching your goal. And even then you’d probably think twice.

Simply put, Askja is stunning. Even in the misty conditions that greeted us, it is awe inspiring; sarcastically mocking all attempts to capture its scale in a simple photograph. Try as you might, the mind cannot comprehend the power of the cataclysmic forces that created what you’re seeing, or that – less than 150 years ago – it simply didn’t exist. Simultaneously, the mind doesn’t want to comprehend that, at any moment, from a place just below your feet, those same forces could once again be unleashed. 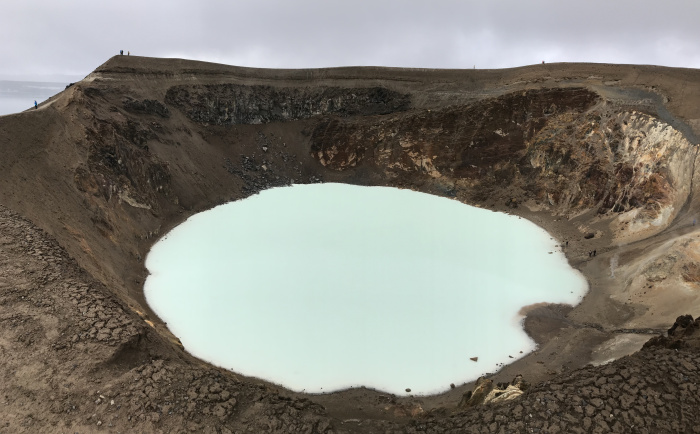 Yet, for all of Askja’s magnificence, as I turned the car to retrace our route, we felt a little deflated.

Like the mountaineer who has finally struggled to the summit, looked out in amazement at a majestic vista, and suddenly realized he’s only at the halfway point, the joy of reaching our destination was soon incidental to the prospect of the return journey.

As we bounced our way back along a now familiar track – crossing the same rivers, more confidently this time, but just as cautiously – it occurred to me that this is a feeling as old as travel itself. How long after arriving in such legendary destinations as Mandalay, Samarkand, Timbuktu, did the renaissance traveler’s thoughts turn to the perils and frustrations involved in getting home again?

The hardships of those epic journeys may be impossible to replicate today, but our memories are similar. We recall the times we persevered when it would have been easier to turn around; we remember when we confronted and conquered a paralyzing fear.

And, finally, when we stood in silent, relieved contemplation of a distant destination, we knew we had another story to tell. 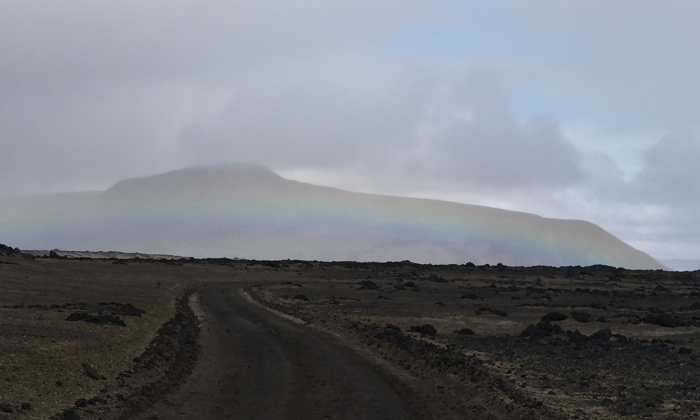 To read more from Nick check out his excellent blog.