Roads around the Raj: Transport in India

“It’s the city of Shiva, so it’s crazy.” This was definitely a fair comment from our (myself, and a Korean girl with a fondness for saying “Ashton Kutchner, handsome boy!”) appointed guide for our tour of Varanasi. Varanasi is in the North- East of India and is the traditional first stop for travellers heading south from Nepal. Shiva is one denomination of god in Hinduism, known as the supreme god but also as the auspicious one, or more relevantly, the destroyer.

This fits well with Varanasi, which is something approaching organised chaos as cows, bulls, and dogs of varying levels of health, roam freely (being religiously sacred). Traffic lanes are essentially non-existent and relieving yourself on the side of the road is perfectly acceptable. (So not all bad then, if you’re a man, at least).

Good old Lonely Planet gives two pieces of advice to travellers coming from Nepal to Varanasi. The first one is to arrange your own bus at the border at Sonauli, which is, interestingly; fifteen minutes forward, time wise from India. I didn’t do this. I paid 800 rupees (about £11) for a through ticket from Chitwan in southern Nepal. This comprised of two buses and a train from Gorakpur to Varanasi. As I gazed longingly at the air-conditioned coaches I realised that this was my first mistake. 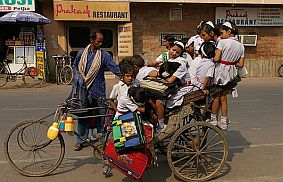 Having made it to the border despite the first bus breaking down, I found the hotel where I was to meet a Mr Para, who would supply me with my onward bus ticket to Gorakpur. What could go wrong?I was greeted by a group of  guys in their late teens and early twenties, one of whom, put me on the most cramped, and over crowded local bus you could imagine. There were no positives. When more and more people poured on, and the prospect of spending three hours without being able to move a muscle, or breathe became a possibility, I reasoned to take Lonely Planet’s advice.There was one small problem with this. My bag was bound to the top of the bus and the barefooted, dentally challenged man in charge, was in no mood to untie them all just for me. Then India presented a solution.

“You can sit on the roof if you want.” Rats have not moved up drainpipes faster. So I rode into India waving at all around me – the crazy guy alone on top of the bus. Awesome.There is a technique to this, when the bus is moving, it’s preferable to lay flat down and cling on, or the bumps in the road and speed of the bus will force your swift departure from your peak as King of the World. As the sun went down, it became distinctly chilly, but I really couldn’t have cared less. I dismounted at Gorakpur, very fortunately outside the railway station, which was absolutely enormous. 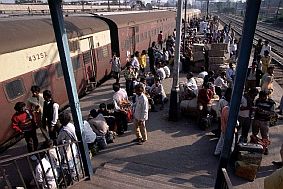 The train journey itself in sleeper class, 134 rupees or £2 for a 6-hour journey, was perfectly pleasant; the carriages were filled with other travellers (mainly Israelis) and middle class Indian businessmen. Then I made my second mistake.

Lonely Planet warns of getting taken to guesthouses on arrival in Varanasi which benefit from the success of the Vishnu Rest House and call themselves something similar. I vowed this would not happen to me. Au contraire. That said, it was 5am and I wasn’t about to insist on being driven around downtown Varanasi for my ego.

The trains in India are generally fine. Go as high a class as you can, and it’s perfectly bearable. The only issue I had, was going from Jaipur to Jodhpur where the train, the Marudhar Express (something of a contradiction in terms) was five hours late, so I got to know platforms two and four (it kept changing), at Jaipur railway station pretty intimately. Latterly, I found out that the reason for this was that the same train serves the same line all the way from Varanasi to Jodhpur which is according to mapsofindia.com, 1113km and the whole route takes just over two days, so the odd delay is not a total surprise.

My third mistake was getting a bus from Agra to Jaipur, “It is aircon, Oh yes,” said the travel agent in Agra. As it turned out, the bus was not air-conditioned, and overbooked by about twenty. After a heated argument, it was decided that five twenty something boys would share the area just behind the driver, leaving myself and the Korean girl, (same one, by pure coincidence) safely in our seats. 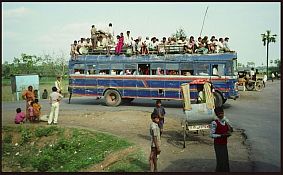 Rickshaws are interesting. Like Tuk Tuks in Thailand, or the non-motorised versions in Covent Garden, they are fine to use, dependant on the pollution level in the city. In India up to five people will gladly squeeze into a space fit for two at the most. They will quote tourists five times what the actual fare should be.

Personally, on the odd occasion I found myself haggling over 20 rupees, (about 30p) I persisted for a while but ultimately gave in.
Take the journey back from Mahrangarh fort in Jodhpur, northeast India as an example. The conversation went something like this.
“Sarvar guesthouse, you know?”
“Yes, 60 rupees.”
“30.”
“40.”
“Ok, can we stop at an ATM?”
“Yes.”
We get back to the guesthouse, not via an ATM. Argument ensues.
“ATM, very far 80 rupees.”

To carry on the theme of money, the otherwise very helpful owner of the Chit Chat guesthouse in Jaipur said he had a friend in Jodhpur and could reserve a room for me at his guesthouse. Once this was done, he asked if I would pay for the phone call. My response, thinking he was joking, “Yeah ok, haha.” It was 5.96 rupees, about 7p. He did, however, arrange my train ticket, for a fee, obviously.
I also suffered the weakest excuse for doing washing in the world here, if it had been soaked for more than a few minutes and folded, I would be surprised.The main complaint I had, was not that everyone in the street asks you for money, it’s that people at guesthouses and rickshaw drivers, who are already getting your money, try to extort as much as possible, meaning, that by the time the beggars in the streets asked me, I was too annoyed to dish anymore out. But then, you can ride on top of buses and use the roadside as toilets, so it’s not all bad.