Rio Carnival on the Cheap

Rio Carnival is probably the best party on earth and is certainly the most famous. Every year, Rio’s cariocas (the name given to Rio’s inhabitants) come out to mingle with the half a million or so tourists who flock to Rio on their Brazil holidays to enjoy a week of partying. Carnival has always been about enjoying yourself and was traditionally a chance to indulge in passions of the flesh before giving them up for Lent. Things haven’t changed, and every year people drop everything they are doing to focus on one aim: having fun! However, like all good things, Rio Carnival can be very expensive, with a hotel in a prime location costing over $1000 for a four-night stay and a reserved Sector 9 grandstand seat in Rio’s Sambadromo – where Rio’s famed carnival parade takes place – costing over $500 a night. Add to this the general expense of being on any holiday and you are suddenly faced with the prospect of one very expensive week on holiday in Rio. However, where there’s a will, there’s a way, and here are just a few ideas to save money on your trip to the Rio Carnival.

Cheap seats at the Sambodromo

Whilst Sector 9 tickets for the Sambodromo will guarantee you a good view as well as a seat, they come at a price and, bar the luxury boxes, are some of the most expensive. There are much cheaper seats available and it is certainly one way to save money yet still be able to be at the main parades on the Sunday and Monday. It is generally considered that the best seats are from the middle towards the end of the route and so if it’s cheap Rio Carnival tickets you’re after, you’ll want to buy tickets for the grandstands at the start of the route. There are seats in the cheaper grandstands, but they are unreserved, so you cannot guarantee you’ll all be able to sit together. The upside to this is that you can move around freely and get different perspectives of the parade.Many people would even argue that the cheaper seats, being unrestrictive, lend to more of an easy going party
atmosphere and argue that you don’t get the real carnival experience in places like Sector 9. 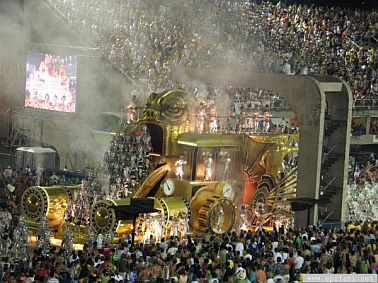 If you have to be at the main Rio Carnival parades on Sunday and Monday then cheap seats are the way to go. However, if you want the comforts of the more expensive Sectors but can’t quite afford the main  parade prices then the Winner’s Parade is for you. The Saturday after the main Carnival parades have taken place, the top six samba schools, as judged during the main parades, will make their way down the route once more in a winner’s parade that will feature everything that was on show the previous weekend. So you will still get to witness the huge floats and infectious music that everyone experienced the previous weekend. Many say that the atmosphere isn’t as electric at the winner’s parade with the air of competition having died away but with tickets at half the price, if budget is an issue then this is a great way to get the Rio carnival experience into your Brazil holidays without breaking the bank.

On any holiday, accommodation is what most of your money will go on, and during Carnival, the price of hotel rooms in Rio rockets. A good way to save money is to stay in apartment instead of a hotel for this part of your Brazil holidays. Whilst you’ll have to look at each apartment individually to check you’ll be making a saving, chances are you will, especially if there are a few of you on holiday in Brazil together. Best of all is that you’ll have access to a kitchen, meaning you’ll be able to save money on eating out.

I’m not going to lie, if you can afford to get to Rio Carnival during your Brazil holidays, then you really should, but that is not to say that there aren’t other great things going on all around Brazil during the Carnival period, many of which will cost you a great deal less.

The obvious choice other than Rio Carnival is to go for the Salvador Carnival instead. This has been described as the world’s biggest street party and is a much more inclusive experience than the Rio Carnival. During Carnival in Salvador, several of the main roads in the city are sealed and for 5 days, trucks laden with sound systems and performers move up and down them allowing spectators to dance along to the sounds of samba, axe and other forms of Brazilian music. You can dance on the streets for free and access to the areas immediately behind the trucks can cost as little at $70 for a day, as does a seat in the stands which line part of the route. Salvador offers a chance to really get stuck in to the Carnival spirit and some would say it’s even more fun than Rio Carnival.

Other options for including Carnival on your Brazil holidays include mud-slinging fights in Paraty, a small town south along the coast from Rio, and the morning ‘Dawn’s Rooster’ parties in the Northern city of Recife in Pernambuco State. So when you think Carnival, think Brazil, not just Rio, but most importantly – remember that Carnival is about fun, so just relax, don’t get hung up about this seat, or that parade, and enjoy the party!

Dan Clarke works for Real Brazil Holidays – the UK specialist for tailormade holidays in Brazil, whether that’s visiting the Rio Carnival, kicking back on the beach, or exploring Iguazu Falls and the Amazon jungle.