Riding into India in Style

Good old Lonely Planet gives two pieces of advice to travellers coming from Nepal to Varanasi. The first being to arrange your own bus at the border at Sonauli, interestingly 15 minutes forward time wise from India, I didn’t do this. I paid 800 rupees (about £7.50) for a through ticket from Chitwan in southern Nepal, comprising of 2 buses and then a train from Gorakpur to Varanasi. As I gazed longingly at the air-conditioned coaches I realised this was my first mistake.

Having made it to the border despite the first bus breaking down I found the hotel where I was to meet a Mr Para who would supply me with my onward bus ticket to Gorakpur. What could go wrong? I was greeted by a group of late teens/early twenties guys, one of whom, put me on the most cramped, over crowded local bus you could imagine. When more and more people poured on and the prospect of spending three hours without being able to move a muscle or breath became a possibility I reasoned to take Lonely Planet’s advice.

One problem. My bag was bound to the top of the bus and the man in charge was in no mood to untie them all just for me. Then India presented a solution. “You can sit on the roof if you want.” Rats have not moved up drainpipes faster. So I rode into India waving at all around me – the crazy guy alone on top of the bus. Awesome.

There is a technique to this, when the bus is moving it’s preferable to lay flat down and cling on or the bumps in the road and speed of the bus will force your swift departure from your peak as King of the World. As the sun went down, it became distinctly chilly, but I really couldn’t have cared less. I dismounted at Gorakpur, very fortunately outside the railway station, which was absolutely vast. 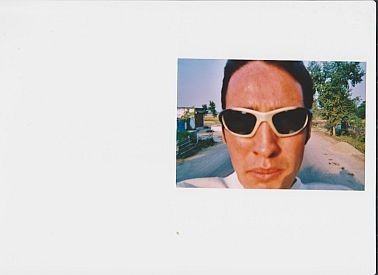