Think of something that is far removed from your daily life. Think of people who believe in things that you would say are impossible or fanciful. Think of mystic ceremonies, elaborate and arcane but rollicking and seemingly illogical with swirling dancers urged on by a cacophony of traditional orchestra music. All this evoking a wild and exotic past and at the same time heartily co-existing with the present. This is Yadana –gu or a nat (spirit) worship festival of Amarapura.

Roundabout the end of August, a little-known spirit worship festival called Yadanagu which could be loosely translated as “Cave of Treasures” is held just outside of the town of Amarapura, near Mandalay on the way to the Irrawaddy Bridge. The festival is dedicated to a flower-eating belu ( ogre ) mother who supposedly died at Yadangu after hearing of the execution of her two sons and became a nat or spirit. Others say it is a festival started in the Ava period ( about 200 years ago ) to take the people’s attention away from politics and the scandals of the royal court of Ava, the ruins of which are not too far away from where this event is. Anyways, it is here that nat-kadaw (nat- wives / spirit mediums), nat-devotees and day visitors taking a break from the daily grind come to pay their respects to the belu mother with dancing and feasting with some shopping thrown in between. 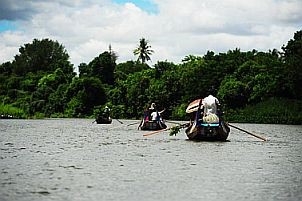 It is easy enough getting to the place from Mandalay, we just took a taxi from Mandalay for about 30 minutes and when we saw large stalls set up and the crowds just south of Amarapura, we knew we were there . You can either walk to the nat spirit shrines from the main road which connects Mandalay and Sagaing or take a delightful sampan or boat ride to the main festival site. We took the boat ride.

There are about 4-5 main nat-sin ( nat shrines) where the dances and homage are given not only to the main belu mother nat but also to the rest of the pantheon of 37 other Myanmar nats. Re-enactments of their lives and deeds are also carried out with swigs of whiskey and bites of fried chicken by mostly tranvestite / gay spirit mediums in drag plus female spirit mediums. They beseech the nat for blessings and favour mostly in the form of material windfalls of money and riches from successful business deals in the coming year.

Yadanagu is held in the middle of raining monsoon season in Upper Myanmar, a place where it does not rain much but when it does, it pours. And when it stops the humid heat is stifling.. incessant and over- powering. That is why at the festival grounds soft drink vendors abound with an assortment of locally- produced and only locally- known wares with names like ..Quench…. Star Power… Sparkling… to sate the thirst of all comers. The rural Burmese like their soft drinks very very sweet they say and maybe this has something to do with the need to replenish body fluids quick, when you are dripping with perspiration and depleted of necessary salts and sugars after labouring in the tropical heat. 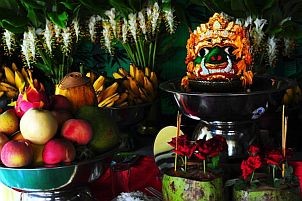 The fairgrounds are full of vendors selling fried fish and prawns. I tried a prawn fritter ,tasted ok I guess but was rather brittle and the prawn’s whiskers and various other sharp points pricked my lips. Anyways I proceeded to wash it down with some cold Star Cola. After that I had a local palm sugar snack called some local Mont Lon which seem very popular with the local festival-goers. I also noticed that compared to most other A-nyar ( Central Burma ) folk or religious festival grounds that the Yadana-Gu environs were far more neat and tidy, without the mud and rubbish that plague the other such festivals. But again maybe I should not be so critical as when the heat and rain and crowds converge upon small confines there would be at least a bit of unsanitary disarray.

Up to about 2005 these types of festivities. not being of the mainstream Buddhist religious variety were full of people drunk and wandering about joking teasing and demanding money for tipples. On the way to and back from the main shrines large crowds pushed and heaved and ladies’ behinds / bottoms were pinched in jest and pickpockets used to have a field day they say.

Sadly those days are gone as the local authorities decreed that no alcohol was to be sold or consumed except for the stuff strictly used for the use in rituals and even that in severely limited amounts ,more for decor than substance and hearty effect but I suspect secret swigs of the bottle are of course still taken when the prohibition police aren’t looking. Well it would surely be difficult to ban secret tipples when every nat-altar at the festivals (and there are hundreds of them) are full of alcoholic drinks on display in plain view as offerings to the nats. Also the offerings of soft drinks would make great chasers or cocktail- ingredients. Couple that together with the multitudes of fried goodies of chicken and fish to munch on after the swigs. 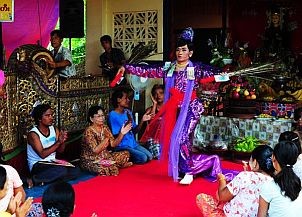 The festival is visited mainly by locals and a sprinkling of foreign tourists. That is one of the pluses of coming to Upper Myanmar as most of the time you are the only foreigner around and the people are warm and friendly with genuine smiles. No foreign tourist-targeted souvenirs are for sale but I could see lots of wares that farmers would need on the farms: spades knives, hoes etc. And lots of stuff their wives and kids would want too: costume jewelry, fake football jerseys and toy plastic machine guns, dried fish and pottery all prettily displayed for sale. Just browsing along the stalls on the way to the nat- sin is a totally different experience from visiting the modern shopping mall. Maybe a fake Manchester United or Real Madrid football jersey for 1500 Kyats or 2 dollars might make a souvenir to laugh about but of course there are other implications comcerned with that kind of purchase but it goes to show the popularity of football especially that of the English Premier League even in faraway Myanmar.

In a predominately Buddhist country and as a side trip from the usual tourist sites in the Mandalay region, Yadanagu makes for an interesting experience: exotic, quaint and delightful, taking you certainly away from your usual comfort zone.

For photography enthusiasts this kind of festival is a place to challenge your skills. With the low natural light mixed fluorescent bulbs, the heat and people jostling you really have to work to get some good shots. I mostly used 50mm 1.4f lens with the ISO cranked up to 800 to get my shots. 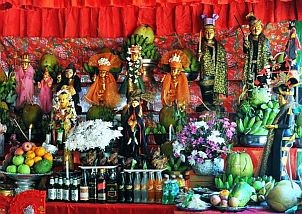 Visiting the festival is best done in the afternoon or evening and can be combined with a trip to the wooden U Pein Bridge in Amarapura or the pagodas and monasteries of the Sagaing Hills.

When it is held :

For 10 days between the last week of August and first week of September. ( The festivals days are set according to the Burmese Lunar calendar ). So check with the hotel you stay at in Mandalay.

How to get there :

1. To Mandalay by air bus or train from Yangon via Bangkok, Thailand .
2. By taxi from hotel in Mandalay or buses that run south along 84th street to Amarapura
( 45 minutes from Mandalay )

Writer / Photographer
Soe Lwin is a writer and photographer living in Mandalay, Myanmar. He writes about culture, travel and
little-known festivals and events in Myanmar. He has contributed articles to the Singapore Country Club
magazine and various magazines Mandalay.
Email : soelwin.best@gmail.com