Strange title I know.  But let me explain. We just got back from a week in Quebec City. It was my “seventh time” to this beautiful place. Our first time was in 1996. And we just cannot get enough of it. My wife had heard about this jewel of a city in Canada. She told me about it, and tried to get me to say I would go there with her. She hadn’t shown me any photos up to this point, then she showed me a magazine article about it. It only had a few photos, but I saw enough that got my interest. I saw this huge hotel, and a boardwalk kind of thing overlooking the St Lawrence River. So I said, ok let’s try it. Up to now we had only stayed in the states for vacation. New England, Florida, New Jersey, that sort of thing.

First let me say, Quebec City is the only Walled City left in North America. It has been fought over by the English, French, and Americans. There is so much history there. It was discovered by Samuel D. Champlain. The same guy they named Lake Champlain after in Northern New York State. Experiencing Quebec City is not unlike going to France. It is like going to Europe without leaving the continent. The architecture is a mixture of French and English. This since both countries settled here at different times. There are so many churches, it’s hard to keep track. One more beautiful than the last. 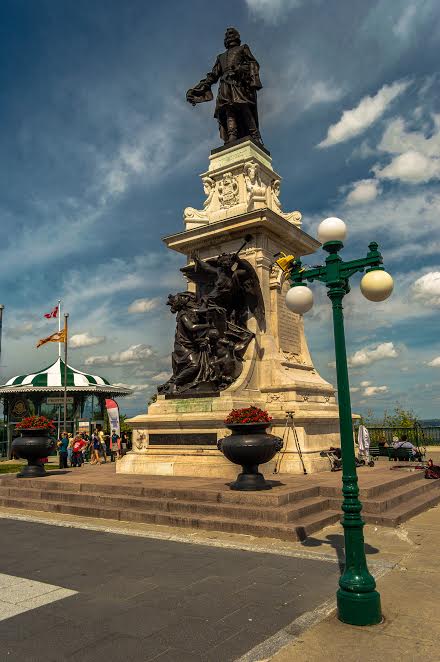 There is an upper town, and lower town. The upper town’s crown jewel is the huge hotel I mentioned earlier, the Hotel Frontenac. Very luxurious hotel. Very EXPENSIVE hotel. It is beautiful inside and out. I just could never afford to stay there. But we have been inside and it is a marvel of a hotel. And in front of the hotel is the board walk I mentioned called the Terrace Duffrin. What a great place to spend some time overlooking the St Lawrence River. You can stroll along the terrace with a snack or a drink. Sit and relax. Watch any number or street performers that may be on the terrace. 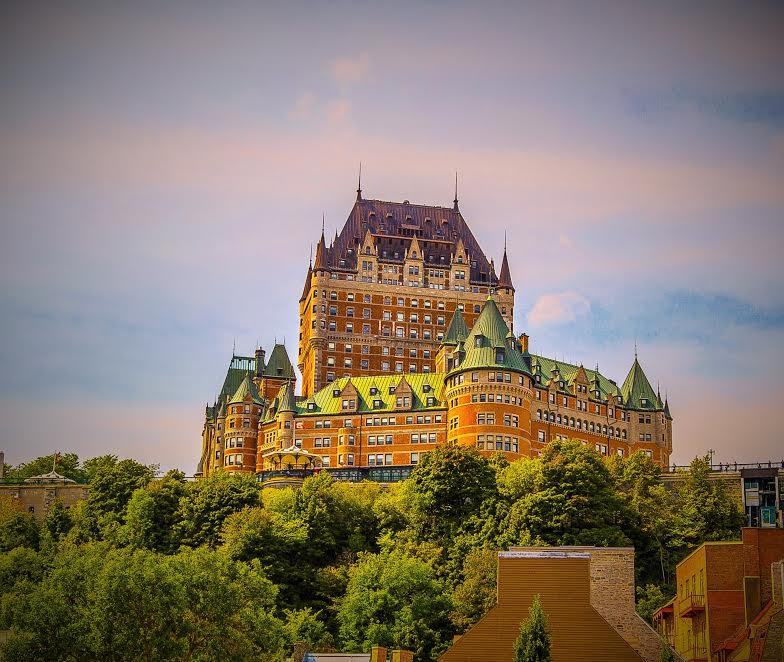 There are two kinds of street performers. The kind that sit or stand and play an instrument, and work for tips. Maybe there is a singer, singing to recorded music. There are the human statues, like you may have seen in other towns. But the best part are the ones that have an actual act. Not really sure what to call these characters. They are a cross between juggler, clown, and comedian. Most speak French and English, some even throw in some Spanish. They encourage audience participation with clapping. And they usually ask for a volunteer to make a fool of, or a kid to use as their foil. It’s all in good fun. Near the end of their act, they remind you, they work for free, and that they had to pay for a permit to perform, and ask you to please show your appreciation with a dollar, two, five, ten, twenty or even fifty. I actually saw a women tip this one act ONE HUNDRED DOLLARS. Speaking of dollars, for the American, going to Canada is a bargain. The exchange rate is very favorable to the US dollar. I have gone to Quebec City and got upwards of $1.50 Canadian for $1.00 US. I believe this time it was around $1.28 Canadian for $1.00 US. Still a very good deal. In the past, you could even get your tax money back as you crossed the border, which made shopping even a better deal. You could even get your taxes back from your hotel stay. But unfortunately, this is no longer done. 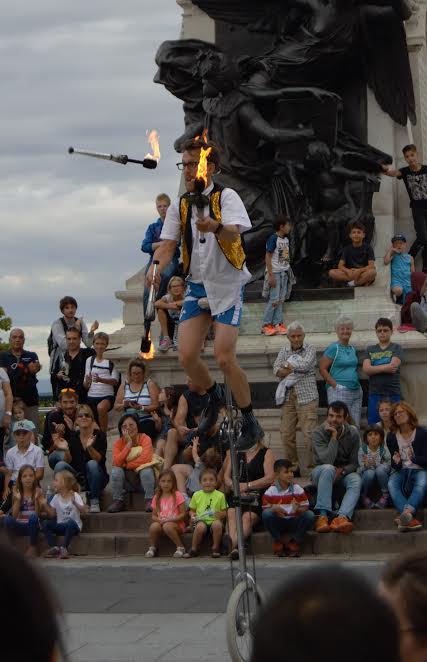 Back to the buildings. WOW, if you like historic structures, you will love this place. Steeple after steeple. Metal roofs, of all colors. The very pretty Quebec Flag with its “fleur de lis” flying from many buildings. Shopping districts, the French Quarter where you can have a caricature done or maybe a portrait in charcoal. The Rue D’ Tresor where artists hang their works of art for sale and on display for your enjoyment. There is a place just outside the main gate of Port St Louis, called The Grande Alle.  Remember this is a walled city and there are three gates into and out of the city. This is a block long section of town with both sides of the street lined with restaurants. One better than the next. All this is in the Upper Town. 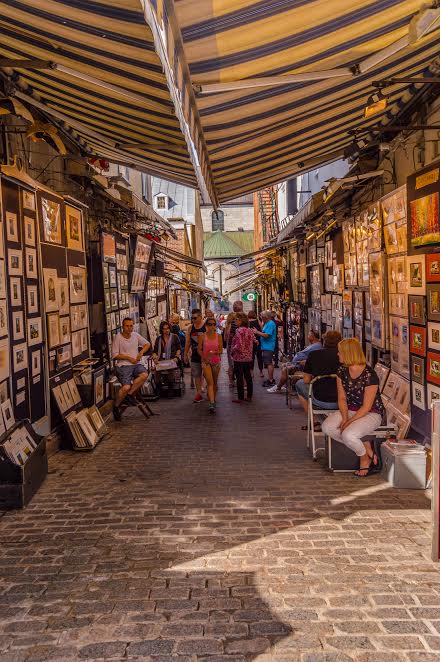 The Lower Town is just as beautiful but down along the St Lawrence River. Here the big attraction is Le Petit Champlain. The oldest shopping district in Quebec City. You can find all kinds of shops here. Clothing, one of a kind jewelry, Lace and Hand crafted clothing. There is a glass blowing shop where you can watch as they blow glass to make any number or unique glass items of art. There are shops devoted to Canadian goods like maple or maybe flannel one piece pj’s. There is a shop of particular interest to kids. They have a trough out in front of store, filled with ice. On the ice they pour some locally produced maple syrup. Then they take a stick and twirl the hardened syrup around the stick. Eat it fast though. It is fun to watch kids try to eat it before it melts all over their clothing. 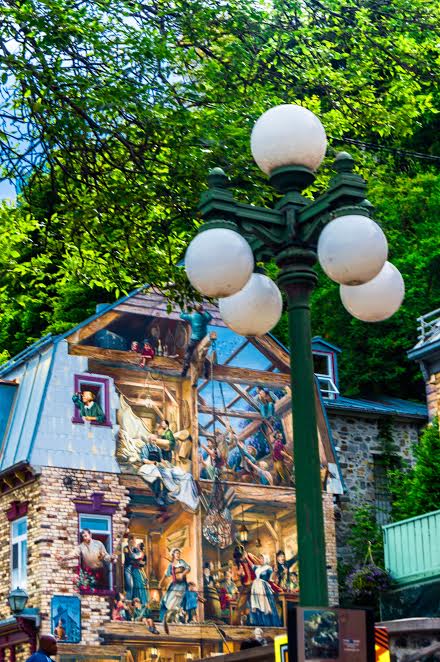 And then there is Place Royal. All European cities have a place like this. A large, wide open gathering place. Usually with a church on one border of the square, and here is no exception. In the lower town there are to locations of unique murals. With part of the History of Quebec City painted on the side of the buildings. Very interesting to see.  You can take a Ghost Tour of the Lower and Upper town that starts on Le petit Champlain. Going with your guide dressed in period costume telling all sorts of tales of things that happened here over the hundreds of years of history. The tour ends inside a church that has the reputation of being the most haunted Building in Quebec City. 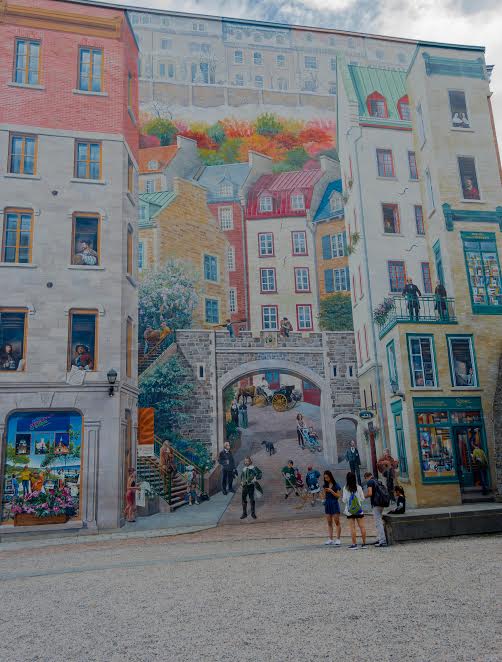 I don’t think I have enough room in this article to tell you all the things you can do here. There are museums, Art galleries, Parks, shopping malls, (outside the walls of course). One mall was so large, it had an amusement park inside it. Complete with Ferris wheel, roller coaster, bumper cars, merry go round, and any number of other rides. There was even an ice skating rink inside the mall. This is how we spent the one rainy day we had on our visit, checking out the mall and amusement park. There is an Aquarium for you to see. There is a restaurant on top of a hotel that rotates once an hour and gives you a magnificent of the entire area, up and down the river, and the vast expanse that is Quebec City. I highly recommend a dinner here. 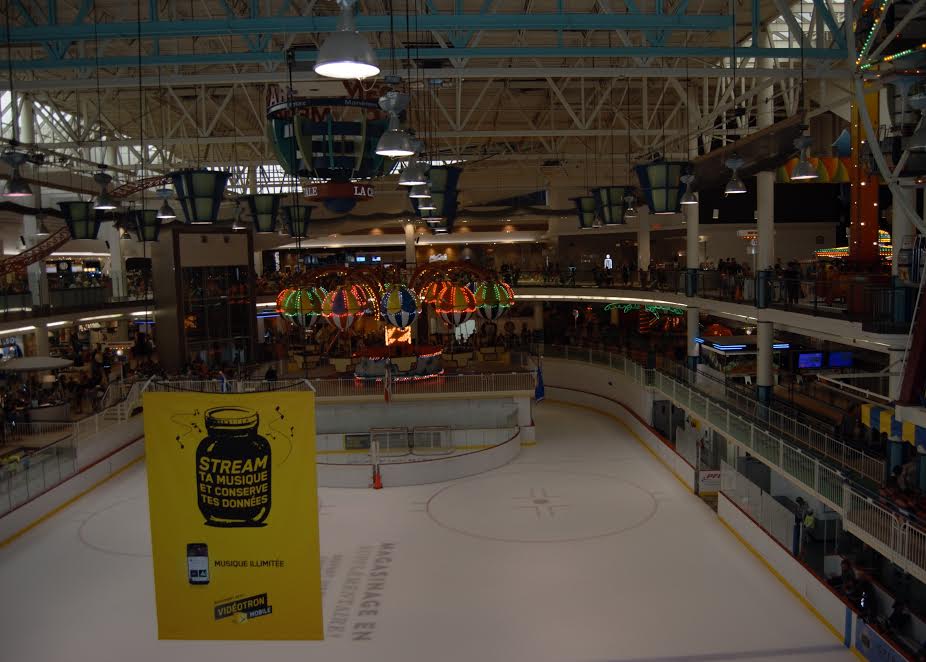 In conclusion, there are Hotels, Bed and Breakfasts, and Inns that you can stay at. Most do not come with parking. Parking is at a premium in this city. You will pay AT LEAST $20.00 A DAY for parking. I stayed at the Hotel Manor Victoria and paid $25.00 a day, but this came with the pleasure of valet parking.  A nice treat for only an extra $5.00 a day. Most places like B&B’s or small inns will offer you a free breakfast, I would try to take advantage of this to cut down somewhat on the cost of your trip. And my number one tip for a trip to Quebec City is STAY INSIDE THE WALLS. Park your car and walk everywhere to see everything. But beware. Quebec City is built on a hill. Walk down and taxi up, save some wear and tear on your legs. Bon voyage mes amis.

To read and see more from Joseph Mack please visit https://www.facebook.com/vacation.photography.too/ and http://yj4636.wix.com/iwanttogothere