After a long journey of boats, cars, buses and more boats we made it to the northern point of Panama, just 19 hours after we arrived in the country. Bocas Del Toro is a group of stunning islands in the north of Panama on the Caribbean coast. We managed to find a hostel on the island of Colon, after a few rejected us, as they had no water. Unfortunately the one we chose is a small, cramped, stoner hostel however it was clean. Bonus pancake breakfast! A short walk around town after breakfast and we had seen it all. We decided to head off to Red Frog island the next day via a snorkelling boat trip with the added promise of seeing sloths. 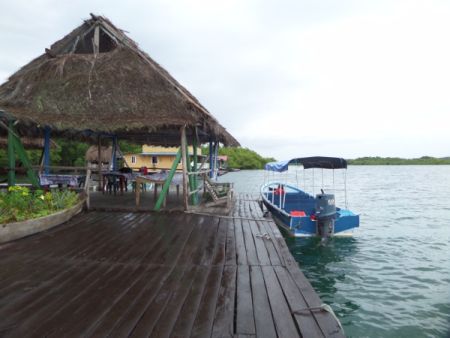 We had a delicious fish cooked island style in coconut milk and tasted some local beers, all while looking at a bunch of lovely islands. We returned to the waterfront bars in that evening for happy hour cocktails and enjoyed a piña colada or two.

Our snorkelling tour began after a nice breakfast of bacon and eggs with rain. It just got heavier and heavier. Our tour continued to Dolphin bay to see if we could spot some dolphins, we saw 3 of them playing in the cove. They come in to eat the jelly fish. We also saw some jelly fish. Next we headed off to the island from the original Survivor TV series. It rained. The rain got worse so our visit to the island got cut short and we headed off to do some snorkelling in Coral Key. The rain continued to get heavier, it hurt as it hit our faces and bumping over the waves hurt our backs and bottoms. The coral in Coral Key we saw was so beautiful. We saw corals of red, yellow, purple, green and various other colours.The fish were pretty awesome too. 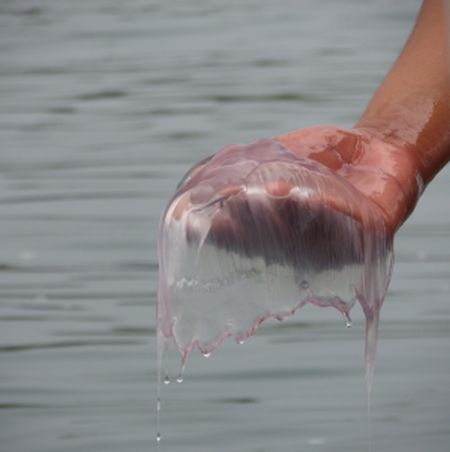 After snorkelling we had some lunch and we met some kids who fed the fish some bread and the fish went nuts for it. Black snapper, green needle fish, yellow ones and parrot fish. They tried to catch the fish without luck. Our final stop of the day was to Sloth Island to see some sloths, we managed to find 3 of the in the trees near the water.

In the morning the sun was out so we headed off along the road to red frog beach. We swam and dug holes in the sand for a while before the sun disappeared and the rain started so we headed back to our hostel for lunch. I discovered a bat living in one of the toilet cubicles, not going back in that one again.

After lunch the sun was out again so we went for a walk along the beach. A man in a golf cart stopped us on the road and asked if we wanted a lift to the beach so we jumped on the back, it was pretty fun. The we walked up along this decking to a view point over towards some islands. We then walked back to the road and took the road further up the hill towards the next beach, turtle beach. It was a long stretch of white sand disappearing into the trees and jungle. 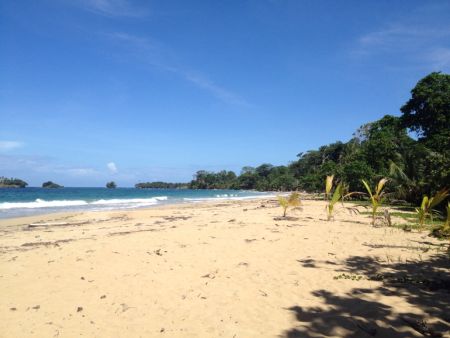 On the way back we saw a sloth hanging from a tree. Then on the other side of the road we saw two more, one looked like a baby as it was so much smaller and fluffier than the other ones. Further down the road we spotted another sloth in the trees and when we got back to our hostel one of the girls told us there is one just outside our front door. What a day. Tomorrow we go on search of the red frog!

After a long breakfast  we went down to the beach to look for the red frog and have a swim. With the sun shinning we walked all the way along the beach dodging waves and climbing over trees until we found the jungle path. It was full of mud and we were slipping all over the place but we finally managed to find two tiny red frogs with black spots. They were really cute.

Another day of perfect sunshine saw us spend yet another day sunning and swimming before we had to head back to Bocas Town the next day.