Well what a start! From the plane you glimpse a magical Sicilian coastline, my expectations raised, a remarkably unspectacular bus ride from the airport to the central station followed.

The Palermo hinterland is a typical eurobahn mix of low-rise housing, and small industry, with hints of the volcanic terrain between towns.

Aspects of Palermo are a bit shabby, and could do with some attention, however the housing is lovely, mostly 19th and early 20th century, and clinging to an 18th century layout of boulevards and piazzas, that make navigation easy.

Arriving at 2pm, a little late for lunch, I found a restaurant and ate what was offered. I then just walked the streets, eventually deciding on a hotel off Via Roma, which along with the Via della Liberta, is the street that makes up the spine of Palermo. It is home to the classier shops, hotels, banks and plazas that are dotted along them. Monte Gallo and Monte Grifone loom distantly at either end of the city.
The hotel at only 35 Euros a night was cheap but ghastly, my comeuppence for not planning. The bonus? I found a great bar nearby to watch the football in, with unlimited free tapas. I ordered a bottle of a local wine; suffice to say it wasn’t the best. Tourist info sent me roaming round after hire bikes and eventually I found a place, I was ready to do the knowledge! 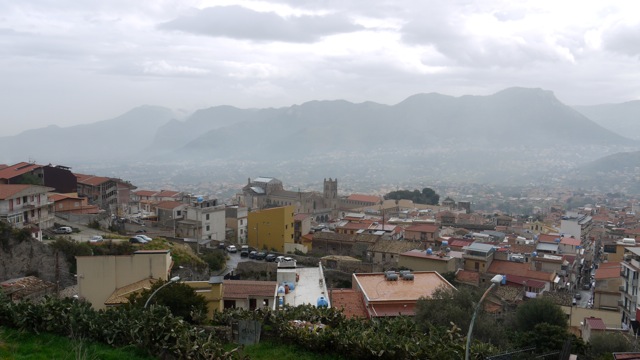 The bed and breakfast had no breakfast! So I soon found a cafe for coffee and croissant, what do Sicilians have for breakfast? A double espresso from the look of it! I had a sausage and cheese baked croissant too, perhaps breakfast is not for the Sicilian.

With it raining quite heavily, brollies were being sold ferociously on every corner. The marble pavements were tricky in the wet, and when the rain stopped, a bike made sense.

After spaghetti with sardines for lunch, I cycled to Mondelo which is about 15 km along a coast, which became more attractive as you left the city. A strip of flat land was backed by the sheer volcanic rock of Monte Pellegrino, and the mountainside was lavished with attractive modern villas.  Then I headed onto the bleaker cape Gallo, where the setting sun pierced an unusually cloudy Sicilian sky.

More football, wine, tapas and a late stroll around the packed bars abounding in Piazza Carnuchia followed. The square was graffitied, half demolished, and vibrant with sophisticated and mostly young people.

To Monreale, an old hill-top town noted for a terrific mosaiced cathedral. Quite a climb, but surprisingly easy on the mountain bike.  Getting out of Palermo is a hassle, not bike friendly, with frequent one-way detours and some hairy roundabouts. But the stunning views all the way to Monreale and beyond to San Martino delle Scala make it worthwhile.

Watch out for potholes on the way down. I headed to the Trattoria Podado for a late lunch, and a simple secondo course of fried fish with prawns and just a squeeze of lemon. I then ventured to the cathedral, a medieval edifice with a beautifully simple beamed wooden roof, and great masonry. The city market made for a pleasant post siesta meander. 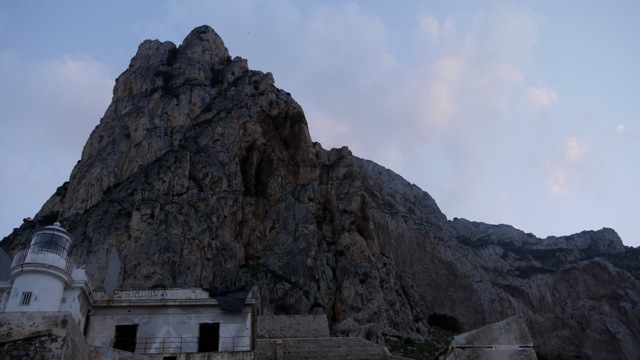 Giuseppe at my hostel told me to take the train to Cefalu, an hour’s journey away, that takes you into the postcard realm of small-multicoloured towns dotted against olive green hills, overlooking a rocky coast.

Cefalu is about tourists, and boasts a modern sea front and a quaintly gift shopped old town winding up to an ancient hill-fort.

Siestas are long in Sicily; anyway I purchased my obligatory ceramic fridge magnet, and after a good pizza in a back street restaurant headed for the hills. March is a perfect time to ride in Italy, the weather is mild and still sunny. I followed the coast road and then ventured a steep more potholed lane rising above the hilly coast, as the sounds of barking dogs echoed across the valley floor to herald my ascent. Then my treat was a breathlessly scintillating plummet, the sea to my right hopefully leading me home. I have a map for emergencies but the sun and scenery are a fine guide, spontaneity is best.

Friday night is party night in Palermo and the bars and certain streets fill out about nine o’clock. The air wafts with seafood, cigarettes, and kebabs. I met Amish again, a young friendly Moroccan guy struggling to earn 5 Euros a day selling lighters and rizlas. He had been in London but lived now with family. My next move was a quick ride off to the gay bar Exit, and a swift return to the more convivial Piazza Carnucha, where the graffitied buildings dominated, and the evening vibrated to the overlapping music of the many bars, and the animated chatter of enlightened youth,

I took some pictures and a young guy glared and shouted ”no pictures” and something about Mafiosi. “I’m an artist,” I yelped, and wandered sheepishly back to the hotel.

A flat tyre miraculously timed itself as I was returning the bike anyway.  The last day was as ever dominated by an impending flight but I had planned a visit to the marionette museum. My regret was not seeing a live show or lecture. Lunch was a swordfish pasta topped off with limoncello, a local liqueur of 98% alcohol and lemon zest (that’s the yellow rind grated). The Podado version has cream added.

And thence to the bus, the end of a Sicilian alfresco adventure, abetted by a friendly and helpful island and at £54 return on Easy Jet, incredible value.