Jurys Inn Hotel, our home for the next three nights is just outside the Old Town.  It is afternoon, and we soon find a quiet pub, a place where we can plot our next day.

We have plenty of tourist maps, giving various guided tours. Our choice is 36 stops in a 6 hour journey, including a boat trip and lunch in a medieval restaurant. (Did they have restaurants in medieval times?).

Day two we are picked up from our hotel by mini bus to rendezvous at Prague Castle, and the rest of the tour party. We number 22 in all plus our American guide . He informs us we will be walking around for the next four hours , and lunch will be at 3.20 p.m.

Prague Castle is at the top of a hill. 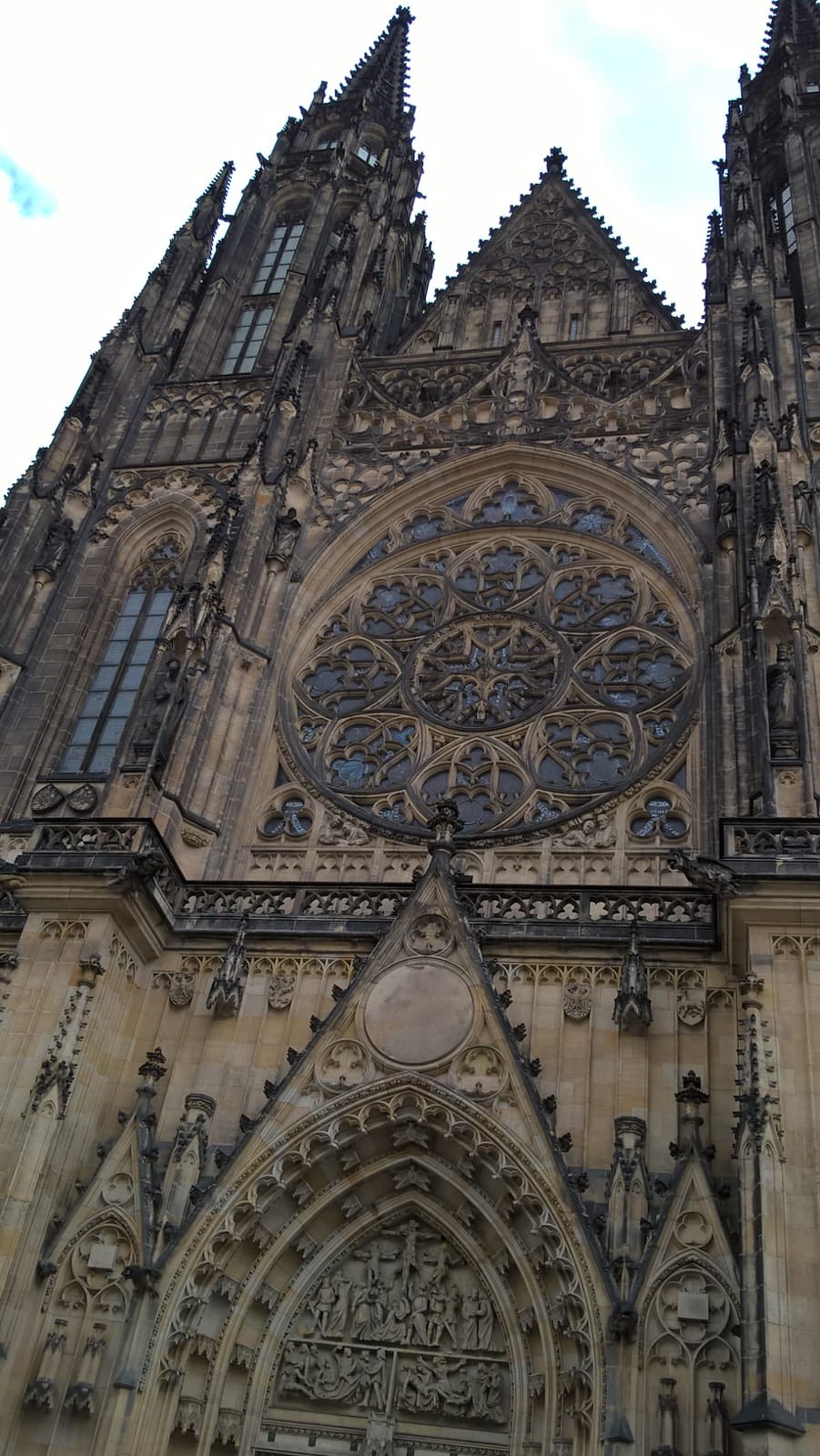 Following our tour of the Castle and viewing the outside of St.Vitus Cathedral ,we then walk down hill, and never go uphill again. This makes the four hour trek less of a burden.  In that time we see too many different places to mention them all.  The Astronomical Clock . Charles Bridge, Lennons Wall stand out in my mind.

Personally I found Lennons Wall fascinating. It was here that youngsters and students would paint messages and graffiti on the wall ,during the time of Communist rule ,as a means of protest. The writing is kept alive today.as the message  “Stop Brexit” proves. 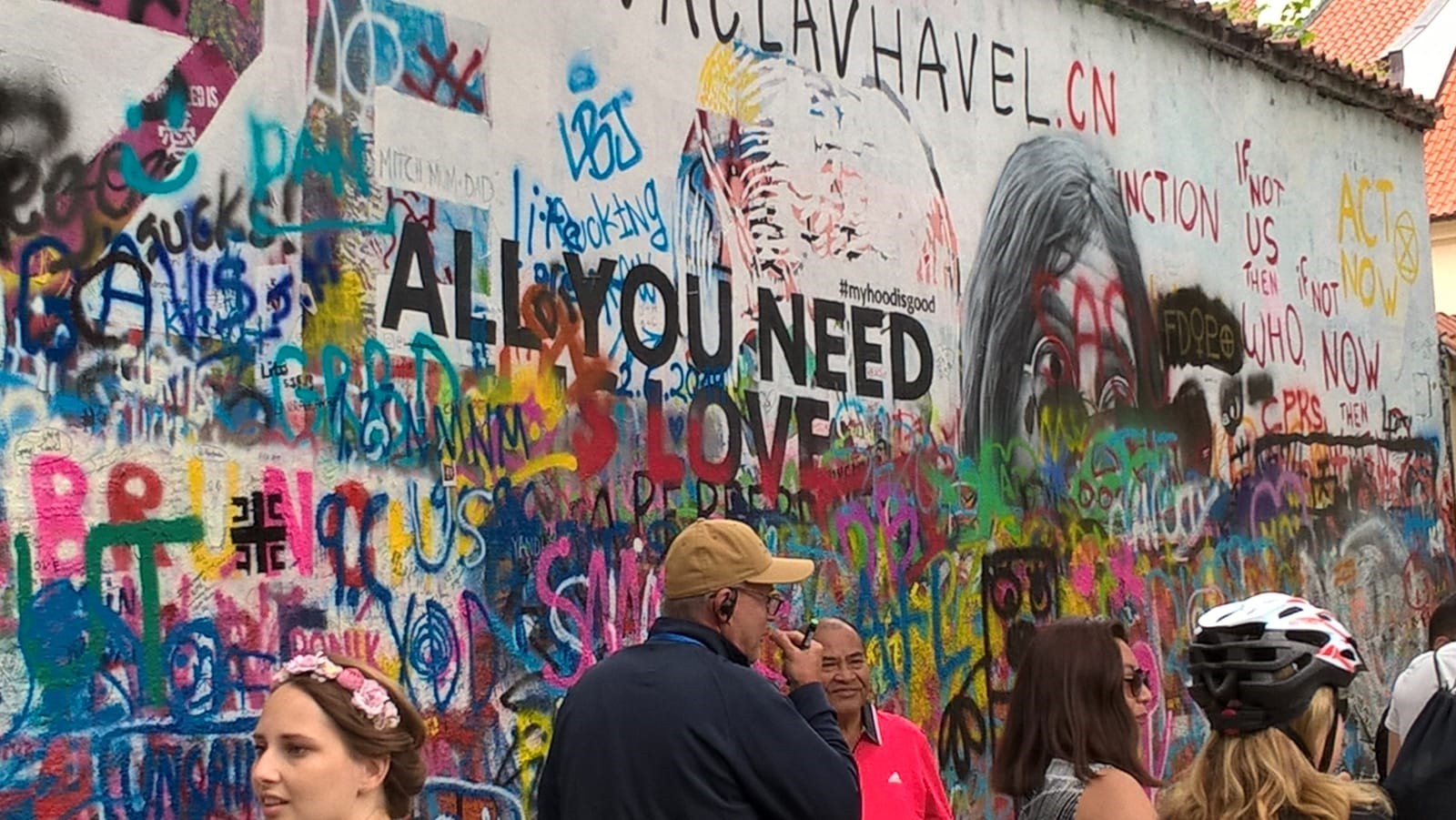 What does register is the enormous mass of humanity walking around the city. Brits are not alone in using Prague as a centre for Stag Party fun. There are groups from a number of countries.

After three hours traipsing the streets and squares of old Prague we are given a fifty minute reprieve, and take a boat trip around the city, that includes a free  glass of beer and piece of cake, or ice cream. For me this is the best bit of the tour.  On board, our guide collects the fare.

Not knowing his name he seems a bit upset when I say he sounds like Kevin Costner. He prefers a previous visitor saying he looked like Jason Statham. I let him have his way, and he will now always be remembered as Jason.

On leaving the boat, we visit the Jewish quarter, which is home to a number of impressive synagogues .

We stop for lunch at the Medieval Restaurant.This is a big disappointment.  Chicken noodle soup starter with three different ways to serve up pork as a main course.

The tour ends not long after lunch, with a look at the Franz Kafka statue.

During the whole tour our guide was most informative, and Prague is a delight.

We were though a bit overwhelmed by the crowds of people, particularly on Charles Bridge, and in the Old Town Square. We were left to find our own way home, and on Jasons advice took the Metro. 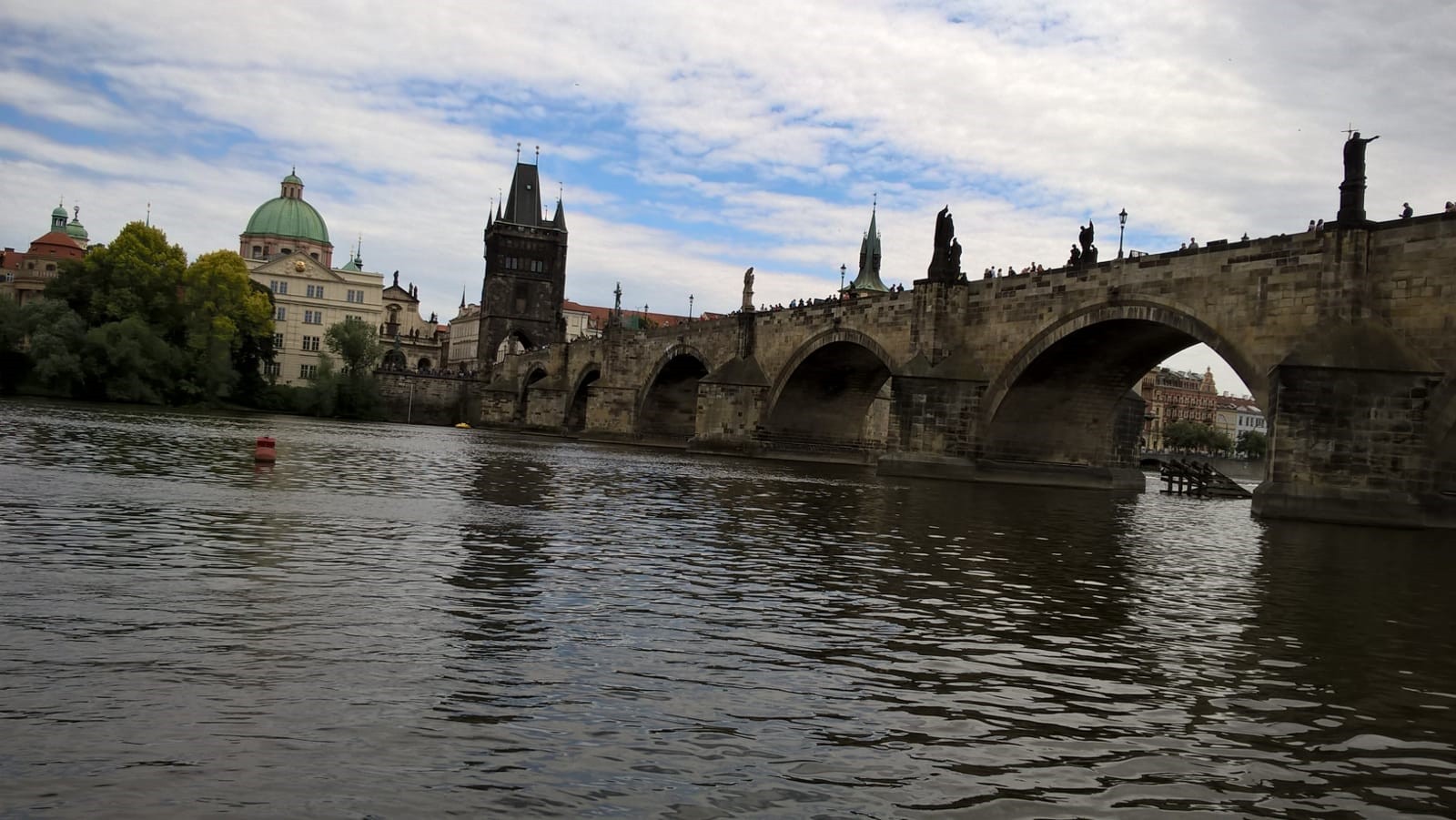 The Metro is an excellent service, and cheap. Four stops for less than a pound , and septugenarians travel free.

After our allocated four stops we were back at the Hotel , and decided to stay in for dinner.

On Sunday morning we visited, on Jasons recommendation, the memorial to the assassins of General Heydrich in June 1942. Heydrich was a particularly nasty Nazi who was sent to rule Czechoslavakia by Hitler.  A small number of Czechs volunteered to fly in from England, after being trained by the S.O.E. to kill him. They succeeded, but they were themselves killed or committed suicide, following their being trapped in the Crypt of St.Cyrus Church. To stand in the Crypt and witness just what the heroes must have gone through is a chilling experience.

As we had enjoyed our boat trip the previous day, we went on another.  This was not so good.

On a 50 minute cruise we went through the same Lock twice, taking up 20 minutes sailing time. The one thing that struck me was the sight of so many Pragueites on pedalloes. They were all having great fun.

Disembarking we made our way to Wenceslas Square for afternoon drinks and panini. A walk around the Square, which is really a shopping precinct , we used Tram travel to return to the hotel. 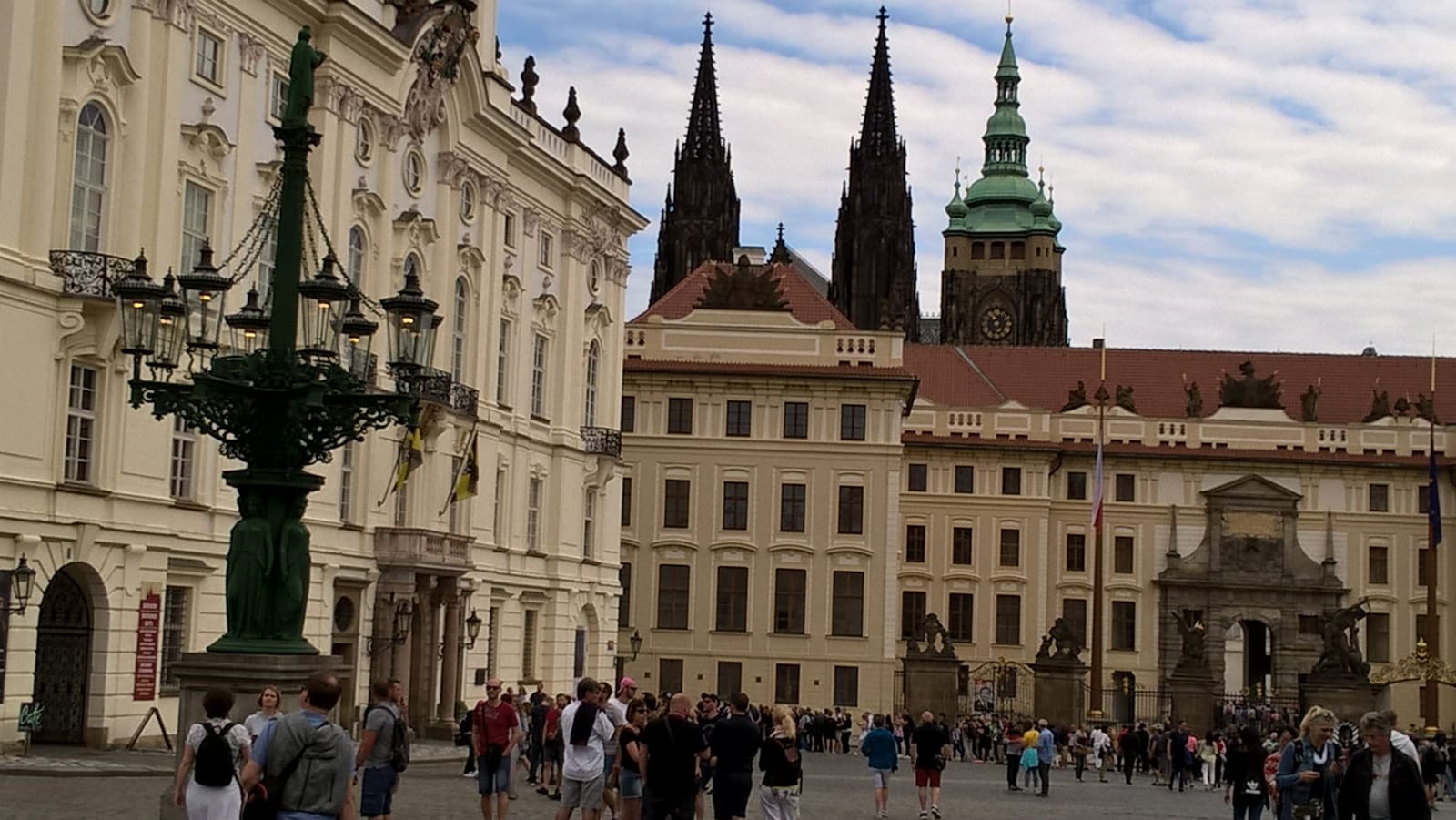 Being seventy plus we were excused a fare. The last evening of our stay, and emboldened by our tram adventure we went again a few stops to another square , Namesti Republicky which is a big open area, and in one corner is the entrance to what is a large modern shopping mall called Palladium.

Considering the place has been invaded on several occasions over the centuries, the Prague people were very friendly and helpful. All the historical sites are within walking distance of each other, which is why the place feels so crowded .
We had a great time and were lucky with the weather.

As so many youngsters visit, it is suitable for all ages to enjoy.