It was black. The cat was black. The cat that perched on top of the man’s head, was black. It had a blue collar! Now, am I the only person of reasonable sanity that thinks that this statement is more than a little bit odd? It certainly felt like it the day I saw this with my own blue eyes as I wandered down Broadway back to Union Square.

My beautiful sunny spring morning had been spent gloriously walking through, around, up, across and down Central Park. For those who have yet to encounter this wonderful park or for those of you who have only just scraped the southernmost tip of it at 59th and 5th to skate  the Wollman Rink or ride in a Horse and Carriage, it is a mish mash of areas, all notable in their own right that have been lovingly married together to become the first landscaped park in the United States. Expanding over 843 acres the park welcomes both tourists and resident New Yorkers alike with equal measure of pleasure. It holds no prejudice and whichever season you happen upon this respite from the city hubbub it will be sure to enchant you to further explore its heart.

With each corner you turn or bridge you cross you will find vacationing happy snappers in pursuit of their perfect shot of the park. Couples squished together on a rock smiling as they pose for photographs with the quintessential New York back drop behind them. Families of picnickers out for an afternoon, taking a stroll after their lunch time snacks complete with forever inquisitive dog and whimsical duck chasing toddler who waddles clumsily as only toddlers (and drunk people!) can. No matter the time of year, you will always discover street artists and buskers performing their craft to anyone who is captivated by their quirky talent. Jugglers, card tricksters and magicians, ramp jumping skaters, mime acts and bubble blowing happy chaps will all be found working their particular forte. You get the impression that they do it for the love of their art and not necessarily to earn their daily bread and because of this refreshing ideal you need never feel the pressure or guilt to toss in your coins but you do so because their enthusiasm has rubbed off on you.

Another season irrelevant pastime you will find taking place throughout Central Park is jogging. A full length photograph of yours truly would illustrate to you that I have never been (and probably never will be!) an expert on this subject but I never fail to be impressed by the abundant number of and the significant age range of the partakers of this blood pumping activity. Central Park is full of joggers and runners (I’m not sure I know what is the difference is exactly. I’ll have to ask The Captain*; he is into lycra and heart rate monitors!) through wind and rain, sun and snow, they will always be there pounding the roads, running tracks and fields of the park. City slickers in their lunch break getting away from the urban sprawl in their short shorts and vests. Colour coordinated ladies running in pairs gossiping about the guy that didn’t call or the divine pair of red Jimmy Choo’s that they’ve spotted in the window of SAKS (in my opinion they should be running harder, if they can chat then they ain’t workin’ hard enough!). The sweatband wearing 82 year old guy who has lived in New York all of his life and give or take a few, has run in his beloved park every day of it. He may have gotten slower in his later years, almost to a fast walk, but his distance remains the same and you get the impression that the day he stops running will be the day he drops dead. 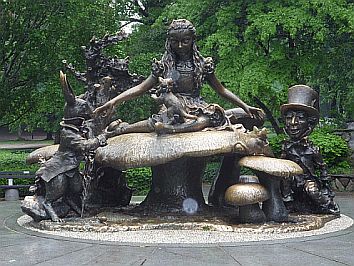 Sharing the running lanes, on the roads at least, are skaters. I don’t mean your amateur, middle aged dad trying to skate skaters, I mean speedy inline skaters taking long strides and making it all look too damn easy as they whizz in and out of the slower runners and joggers in the name of exercise. There is the running and skating clubbers too, taking part in groups at their after tea time activities and following it up with a skinny vanilla latte (and a guilt free donut!) and catch up on the latest in training regimes and half marathons.

Perhaps a summer only spectacle (although not exclusively so as autumn is also justifiably stunning) is a Central Park wedding. Resident New Yorkers or out of towners with an affinity for the Big Apple and wanting to make it a fruitful big day. A popular place to catch a glimpse of a blushing bride and her suitably attired newly wedded is by the beautiful Bethesda Terrace and Fountain. The terrace gives breath taking views of the Central Park Lake and of the majestic Bethesda Fountain. When it was completed in 1863 it was intended to become a meeting place for social gatherings and was affectionately nick named ‘the heart of the park’ which, having sat and ‘people watched’ here on numerous occasions, I am lovingly inclined to agree with.

That’s the thing about Central Park; it is part of every New Yorkers life. Childhood days, teenage years full of angst, social settings and gentle strolls by those in their golden years. It is centric to the city and it lives and breathes through time, watching people come and go, growing older with folk who love it as much as the park loves them back. It has been a silent observer to countless starry-eyed marriage proposals, been privy to many a sweethearts’ first kiss and held it’s breath at a child’s wobbly but brave first bike ride. The communities’ tenderness to the park is epitomised in the small brass plaques that sit neatly on the back of a myriad of wooden benches lining many a pathway through the park. They have been donated by loved ones as an everlasting testament to their dearly departed or as an expression of a living bond of affection. I love to read them as I slowly meander along an unknown route whiling away an afternoon; ‘In memory of Andy Bronfman, who enjoyed Central Park every day, Evelyn and Leonard’, ‘For Joan and Reggie, together forever, where it all began, from their loving son Bill’, and I think my favourite so far is ‘Robert and Eric Batscha, weekends in the playground, learning to ride a bicycle, little league, having a baseball catch, reading and studying. A park for father and son’.

I love that Central Park is all-embracing whether you are a city dweller, a Californian west coaster or a bewildered overseas visitor. It is apathetic to religion, colour or sexual preference and it bears no grudge if you haven’t visited in a while, welcoming you whoever you are and how ever long it’s been. The park innocently stood by on 08 December 1980 as John Lennon was gunned down outside his home in the Dakota Apartments, adjacent to its Westside and subsequently the city commemorated his life, talents and memory by the landscaping of an area of the park previously frequently by John and Yoko as ‘Strawberry Fields’. In the centre of Strawberry Fields lies an iconic black and white mosaic with the inscription ‘Imagine’ created on it. On the anniversary of John Lennon’s birth, 9th October, and also his death, visitors and fans from all around the world flock to Strawberry Fields to pay homage to this Beatles’ legacy. On my last visit I happened upon a Lennon looking (complete with round specs!) chap strumming a guitar and singing ‘Imagine’ while onlookers threw flowers on the mosaic and joined in the song. Cheesy it may have been but I couldn’t help but feeling ever so slightly moved by the diverse array of nationalities and ages all unified in one man’s song for a world peace. 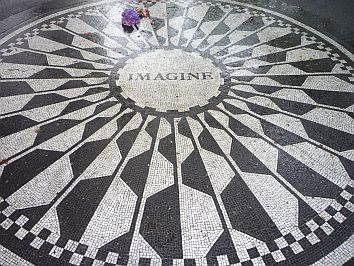 Many of New York’s other delightful places to visit are located within Central Park; the Children’s Zoo, the Wollman Ice Rink, the Boat House, Lake and The Ramble. It has meadows, fields, ball parks, gardens, play grounds, lawns and sanctuaries. It has something for everyone at every time of the year, is full of historical anecdotes and plays host to all who sail in her.

My personal gemstone of Central Park is the Alice in Wonderland statue. She stands eleven feet tall in bronze and is accompanied by The Mad Hatter, White Rabbit, Chesire Cat and her other peculiar friends. Alice was commissioned in 1959 by philanthropist George Delacourt in dedication to his wife, Margarite Delacourt; ‘who loved all children’ so that youngsters could experience the classic Lewis Carroll story for themselves. They are encouraged to touch and climb the beguiling sculpture and indeed decades of such playful activity have caused much of the surface to become smooth and shiny which makes Alice sparkle in the sun and glisten in the rain. ‘Twinkle Twinkle little bat, how I wonder what you’re at, up above the world you fly, like a tea tray in the sky’ !

Central Park is just delightful. She can be idyllic and hectic all at the same time. She is whatever you want her to be whenever you want to be there. When in New York you just have to grace her with your presence, at least once, and please….don’t just get in the horse and carriage and do a small circle loop of one very tiny section of the park. Take off and explore, discover your Central Park.

To read more from Sally check out her blog here. www.travelramblings30.blogspot.com