Muttrah, the souk of Muscat

Al Dhalam Souq, as Muscat’s famous bazaar is called in Arabic, is one of the oldest market places in the Arab world. Not surprising, considering that Oman and the port of Muscat in particular where of immense importance for trade before the discovery of oil.
My friend Wendy and I had chosen the end of Ramadan and the days of Eid festivities for our trip to Oman and, as far as a visit to Muttrah was concerned, this was a splendid choice. Whilst during the day hardly a soul is in sight and nothing stirs, when darkness falls, people come out in doves to visit the souk and, during Eid, shop for clothes and jewelery. 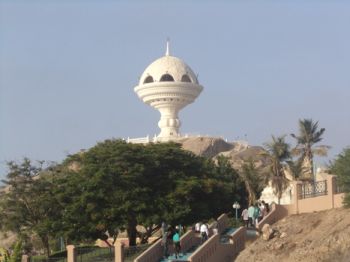 We soon discovered, that there is next to nothing available by way of public transport in Muscat. Everybody has a car or two which makes sense seeing that 1 litre of petrol costs about 50 cents. On our very first night, we were glad to note that a shuttle bus from the Crowne Plaza Hotel left at 7.30 pm for Muttrah and would take us back three hours later. Three hours packed full of a souk experience like no other I have ever had. 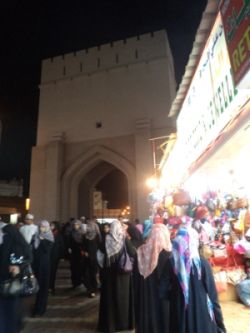 Originally the souk was constructed from mud and palm leaves which were the adequate materials for the intense heat and  readily available. In modern times, the souk has had a considerable facelift with shops and outer walls made from stone and beautifully carved wooden ceilings. 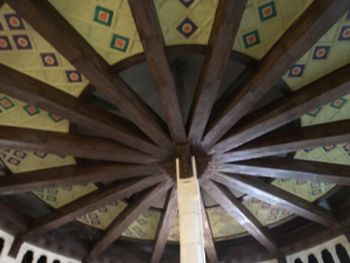 But, the most stinking impression we got when entering through the beautifully illuminated gate  was the smell. Where other bazaars and souks I have visited in the Middle East and Turkey, assault your nostrils with a mix of food, spices, dust and mold, here it’s the all encompassing scent of burning incense and perfume oils. It’s intoxicating and incredibly pleasant. Small wonder though, because Oman is one of the few countries in the world where the frankincense tree grows. Incense is the sap which oozes out of the tree when the bark is peeled back. One harvested, the sap is dried and cut up, then burned in richly decorated burners or even chewed like gum. It’s used for the scent as well as its health properties. 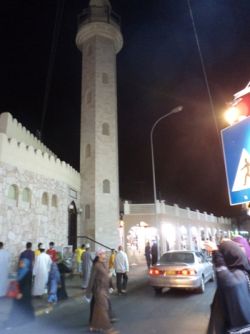 So popular is frankincense in Oman, that one of the most visited landmarks in Muscat is this huge frankincense burner perched on top of a hill on the roadside of Muscat’s Corniche. Men in sparkling white dishdashs jostled with women whose brightly colored dresses peeked out under their black abayas. Kids running around everywhere, people fingering pashmina squares from which the Omani men’s headdresses are elaborately folded, admiring silver bracelets and the traditional daggers or sniffing perfumes. A happy, busy crowd enjoying the somewhat cooler air of the night and the merchandise. Among them, the two of us, savoring the exotic sounds, sights and smells. Once we had our fill, we found a small café on the Corniche and enjoyed one of the best fresh fruit juices I have ever had. A wonderful and unforgettable night out was had in the souk of Muscat.