Memphis, Tennessee the city of history and past controversy has emerged into a bustling and modern lady. Memphis was founded in 1819 by John Overton, James Winchester and Andrew Jackson as the new Memphis named after the Memphis on the Nile River, Egypt. Memphis began as a cotton industry and in 1968 Martin Luther King was assassinated in the Lorraine Motel. As a local, living a few miles outside Memphis, here are my favourite attractions that keep me coming back to this fun town.

Pro Bass Pyramid is an experience for every member of the family featuring the largest display of waterfowl and hunting equipment in the world. In 1991 the Pyramid opened as an event center and home of the NBA team, the Grizzlies. After many different occupants, the Bass Pro Shops opened in April 2015 in the Pyramid which rises 33 stories, shining on the Mississippi, and the major landmark of Memphis. 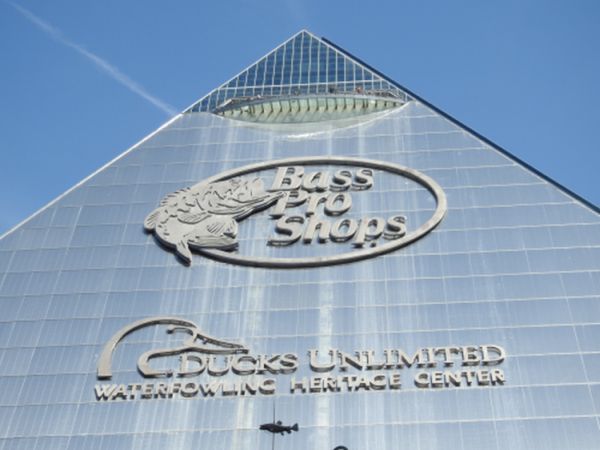 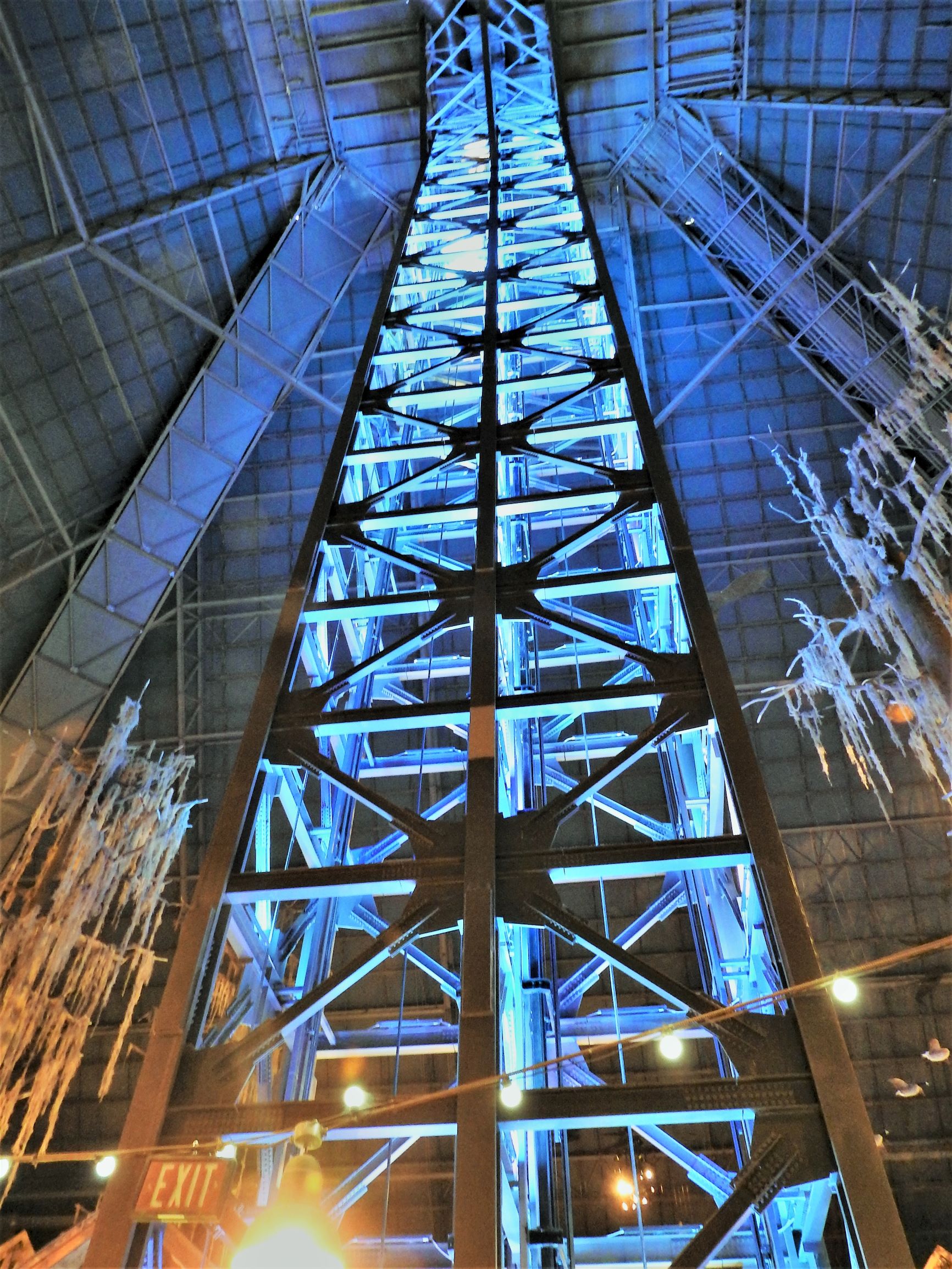 The 103 room Cyprus Lodge Hotel is very prominent as you enter the Pyramid. As you walk through the hotel, moss hangs from its giant timbers. Heavy beamed ceilings with antler chandeliers greet you as you enter the rooms.  Deer heads are mounted on the walls and the rustic bedspreads create the lodge atmosphere.  Large soaking bathtubs, stained glass windows, rough-hewn wooden floors and plush leather furniture add to the hotel’s ambiance.

Many of the rooms have screened balconies which overlook the man made Cyprus swamp with alligators and the 600,000 gallons of water features. The wetlands, a feature of Ducks Unlimited, allows visitors to learn about the wetlands of the Mississippi flyway and the conservation methods.  Centered in the middle of this outdoor wonder is the 28-story, free standing elevator for the brave of heart. An indescribable view down the great Mississippi River, with the barges churning against the current, and the Memphis skyline greet you. Below is Mud Island where concerts are held and to the north Harbor Town where homes overlook the river.   An open balcony on the South and West side and an enclosed one on the North allow for ample views. The elevator ride costs $10 for adults and $5 for
children.

Moored on the docks by the historic and aged cobblestones are the paddle wheel steamboats Island Queen and Memphis Queen III. In the 1850’s and 1890’s migrant workers laid the stone from quarries in Illinois. It is the last complete stone paved landing in America. Memphis became a center of commerce with the steamboats bringing cotton and hardwood lumber into the port. Today the paddleboats are for tourists, showing them Memphis’s views from the river. As your paddleboat pulls away from the dock you can hear the swooshing and splashing as the wheels churn the water while you stand on the deck.

The Memphis skyline soon comes into view as the steamboat glides along the Mississippi. Relax on the upper steamboat deck at sunset, with a glass of wine and a gentle cooling breeze wafting over you. The big M-shaped bridge is silhouetted against the red and orange sky. You’ll pass Mud Island, site of many concerts. After you exit the steamboat, walk three blocks to the Peabody Hotel. Also known as the Queen of the South, the Peabody was originally built in 1869 by Col. Robert Brinkley. The hotel was named after his close friend George Peabody.  In 1981, a five-year renovation by the Belz family restored the “lady” back to her glory.  When you enter the hotel lobby you’ll be surrounded by graceful seating, with comfortable couches and lounging chairs, and visitors sipping wine. In the lobby center, the splashing water of the famous Florentine fountain lends a soothing and relaxed atmosphere. As you glance upwards you’re treated to a beautiful wooden carved ceiling replete with exquisite paintings.  Off the second floor balustrade is the mirrored ballroom with crystal chandeliers, just waiting for the orchestra to play the welcoming notes of the first dance.

At 11:00 a.m. and 5:00 p.m. the Peabody Mallards waddle from their “duck palace” on the roof, down the elevator, and along the red carpet to the tune of John Philip Sousa’s “King Cotton March”. Since 1932 the four female mallards and a drake (male) have marched to the Florentine fountain where they splash and play to everyone’s delight. Ducks have become the hotel’s logo for the Hotel ever since that date. The Peabody does not serve duck in any of its restaurants!

A visit to Memphis is not complete without a traditional serving of barbeque ribs and one of the oldest rib shacks is the Rendezvous. Established in 1948, down an alley off Main Street, you can smell the aromatic smoke from the barbecue pits. Descending the stairs to the restaurant you’ll see people chomping on ribs, washing it down with pitchers of beer. The barbeque pit masters open the heavy iron doors, and smoke billows out. Nostalgic photographs of Memphis and its most famous residents hang on the walls with memorabilia.  The room is heavy with
atmosphere. Don’t miss it.

Down 926 E. McLemore street, Stax Studio stands as the home of American Soul Music where Rufus Thomas, Otis Redding, Carla Thomas, The MarKeys and Booker T began their music careers.   As you enter the studio, you feel their music beating in your bones, and the dance floor beckoning. There is Isaac Hayes Cadillac Eldorado automobile with 24 carat trim and white fur carpeting on the floor of the car. The studio walls are lined with records from 1957-1975 and you’ll see an exact replica of the studio where this great music was made.

Graceland, is the quintessential Memphis tourist attraction. Otherwise known as Elvis Presley’s palatial home, this brick colonial style house features four white columns at the front door. Once in a rural community with horses in the pasture, Graceland is now a bustling hub of retail shops and Elvis tourists with the new
huge hotel next door.

As I walk into the Jungle Room of Graceland I can see why it is so controversial. The green shag carpet is reminiscent of the 1950’s. The arm chairs with wooden arm rests that resemble alligators definitely get your attention. Standing behind the velvet roping, I gaze where Elvis once sat, laughing with his friends and great musicians playing music and it is a moving experience. It’s heart wrenching thinking how it all ended. Walking through to the next building with Elvis’ distinctive music playing on speakers throughout the building you find beautiful displays of the “King’s” amazing white jump suits with imposing buckles and gold embroidery.

Elvis’s superb automobile collection provides a rare insight into his life, as does his plane, named “Lisa Marie” with its gold accoutrements and built in bedroom.

Silky Sullivans was declared as a “must” go to when coming to Memphis. One of the first bar and restaurants on Beale Street it serves Silkys “bucket” drinks with straws for the whole table.  There is a long bar down the side of the room always filled with people. One of the features of the bar are the live goats on display in their special area waiting for a pat from the patrons.  The night I was there it was crowded with laughter and talking above the dueling pianos, a signature entertainment.  Silkys is at the top of Beale Street in a 100-year-old building which had a 24-hour saloon, complete with gaming in the back rooms. Today Silkys has a great menu and, yes, barbeque. Silky has introduced barbeque all over the world. He’s considered the “Father of Barbeque”.  He might have some competition with that title with so many “pit masters” in Memphis. 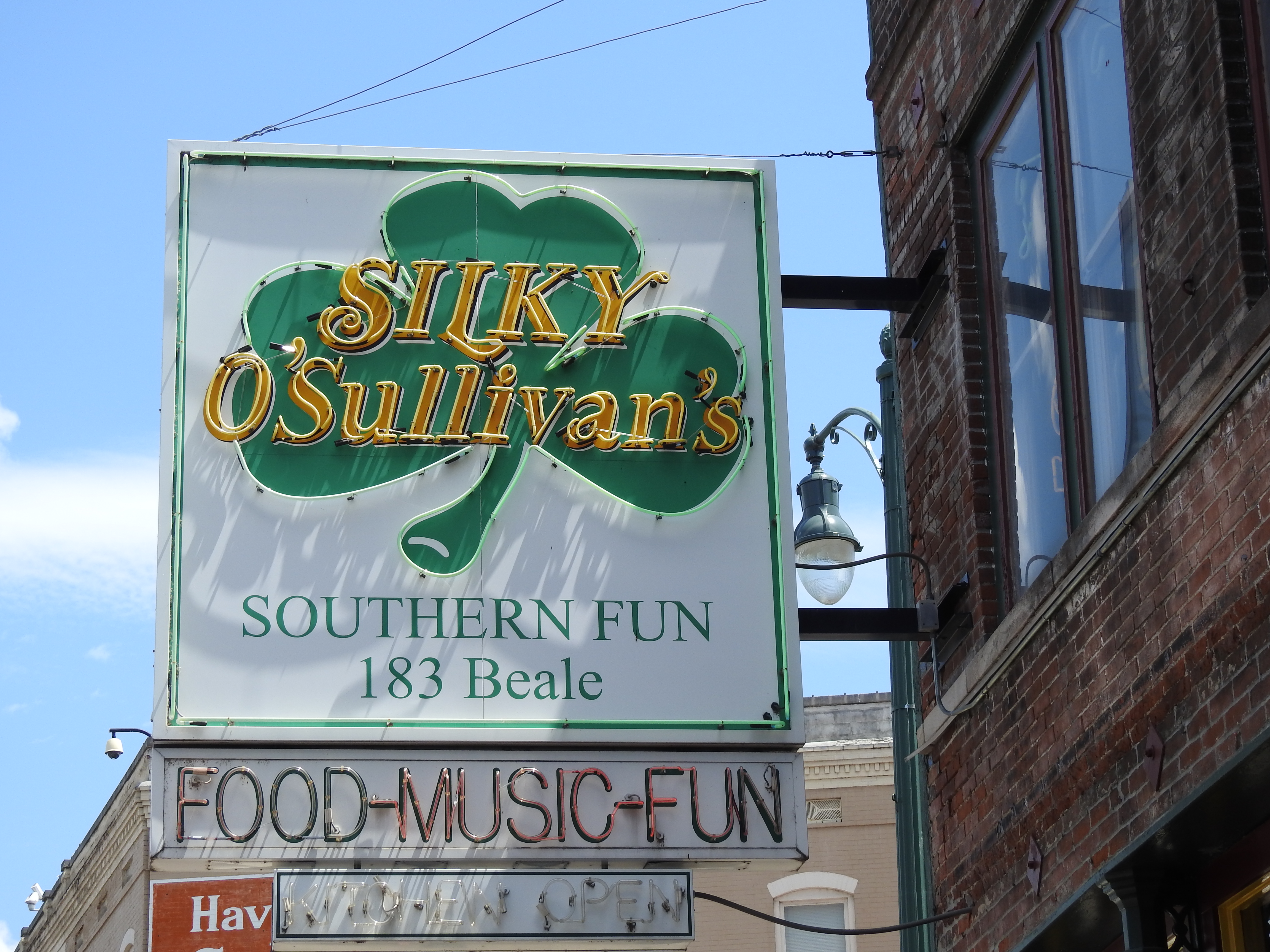 As you move down Poplar Avenue to Overton Park, you’ll come to the Brooks Museum of Art standing in the park’s entryway. The zoo is just through the gates. Memphis is rightfully proud of its zoo which opened in 1906 with 76 acres. In April 2003 it became one of the four world zoos to exhibit the Giant Panda.   The zoo prides itself on providing a natural habitat for its animals. The amazing Zambezi River with its hippos is a real crowd pleaser with children. You can watch the hippos, through glass, swimming under water and walking at the bottom of the river. The Northwest Passage has huge totem poles at its imposing entrance and is the home of polar bears, sea lions, black bears, bald eagles and ravens. The Teton Trek begins with a huge log cabin and the true to life exhibits have grizzly bears, timber wolves and trumpeter swans.   It’s easy to spend all day at this zoo. The admission for adults is $15, for children $10.

The Childen’s Museum is on 2525 Central Avenue. It is a hands on exhibit of playing and action. A child can sit in an airplane cockpit, climb through a skyscraper, go shopping in a store, zoom the cool mist zip line and so much more. A new exhibit of the 1909 Memphis Grand Carousel has been completely restored and placed in a new building built just for the Carousel. Admission is $15 and $3 for the Carousel ride.

For a breezy ride around Memphis try “Rockabilly Rides” by Brad Birkedahl and Brandon Cunning. They will give you an entertaining tour in a 1955 Chevy BelAir automobile or a 1959 Ford Skyliner automobile, a 1955 Plymouth Belvedere or a 1956 Chrysler Imperial automobile. There are two tours to choose from at $250 per automobile 901-264-0819. The first one is Memphis 101 which is a drive around Memphis with entertaining history from the 1800’s and the cotton industry to the Yellow Fever epidemic and a real history tour for 90 minutes. The Red Hot and Blue Tour transports you back in time to Elvis’ Memphis, also 90 minutes. This tour gets great ratings.

Memphis, Tennessee is a town of history and excitement and a great vacation destination.