Once the haunt of dodos, the Indian Ocean isle of Mauritius now attracts professional beachcombers like John M. Edwards, who initially had trouble finding this lost paradise on a map

“Incredible!” You are from New York?!” boomed Willy Van Damme, a friendly Belgian restaurateur and former soldier of fortune, in the sleepy resort town of Péreybere. “Very rare! We get almost no Americans, only French, South Africans, Germans, English, and the odd Italian.” At a snap of Willy’s fingers, an Indian waiter with a smart Nehru jacket and an ingratiating smile darted over and poured my Phoenix beer. Sitar music twanged mystically in the background. With a cavalier wave of the hand, Willy added, “Perhaps then you’ve heard of my half brother?” A dramatic pause followed. “Mr. Jean-Claude Van Damme!” What was this place? I wondered. Bollywood?

In Following the Equator (1897), Mark Twain wrote, “You gather the idea that Mauritius was made first, and then Heaven; and that Heaven was copied after Mauritius.” If so then the blueprints for paradise lie east of Eden, west of Waikiki, and about 500 miles off the coast of Madagascar—on a harmonious multiethnic “paradise lost” most Americans can’t even find on a map. One of the most densely populated demesnes in the world but with the highest standard of living in “Africa,” the 720-square-mile
reef-fringed island in the Indian Ocean hosts a bevy of beaches and a culturally mixed message of Indians, Chinese, Africans, Europeans, and Creoles. Despite a proverbial babel of imported tongues, English is the official language (sort of), while the everyday lingua franca is Mauricyen (a patois of French Creole similar to Haitian). When I first arrived at the airport, I thought I’d landed in one gigantic sugarcane plantation. But the memories inspired by sugar here are more bitter than sweet. Mauritius (“Maurice” in French) was known to 10th-century Arab traders as Dinarobin, before the arrival of the
Portugeuse (1510), Dutch (1598), French (1715), and British (1810). In 1968, the Mauritian “George Washington,” Sir Seewoosagar Ramgoolam, both helped Mauritius gain its independence and helped himself to some treasury money slated for the world-famous Sir Seewoosagur Ramgoolam Botanical Gardens. 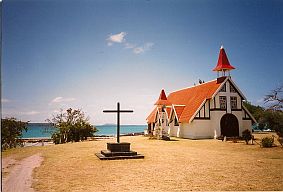 It was the Dutch who named the island for their Prince Maurice of Nassau. It was also the Nederlanders who introduced the sugarcane that covers 90 percent of arable land. Nowadays, sugar is one of the country’s leading exports, with manufacturing and tourism rounding out the economy. After the abolition of slavery in 1835, conscript laborers from India arrived, and today they make up nearly two-thirds of the population of a little over a million. Periodically I’d bus past cairns of lava boulders looking like mini Mayan pyramids and interrupting the cane fields—testimony to the backbreaking labor responsible for clearing the plantations. Incidentally, cane is still machete-hacked by hand here.) Deciding on digs is a spectator sport. Where would I stay?

There was the ultra-exclusive resort Le Touessrok, whose architect Maurice Giraud succeeded in building his “Playground of the Gods”—a safe haven for the affluent, way out of view of the hoi polloi. It was built complete with a mock Bridge of Sighs, Venetian-style footbridges, and its own private
isle. Across from Le Touessrok, the idyllic Ile aux Cerfs (Island of the Deer) offered herds of wild Java deer and deserted coves ideal for nude sunbathing. Strapped for cash, though, I found the budget mecca of Péyrebere to be a good runner-up.

In the lazy days that followed, I avoided the taxi mafia and bused it all over the island (the best and cheapest way to get around), taking in the white sand beaches, amber waves of cane, and mocha-colored mountains. Most nights I hung out at Péyrebere’s popular Indian bar, where a band of dreadlocked Hindus played Michael Jackson and UB40 covers note for note. Here Ranjan, a deep-sea fisherman, told me of the upcoming holiday of Divali (Festival of Lights). “You will enjoy Divali. Don’t miss it.” Added an expatriate Brit married to a local Tamil woman, “Mauritius is unique: People of different religions celebrate each other’s holidays.” I learned about “sights” in the capital of Port Louis—a President Kennedy Street, a Nelson Mandela Boulevard, and a Muammar Khadafy Square. Later at> Port Louis’s DSL (Deva Saraswatee Laxmi Coffee House), opposite the St. Louis Cathedral, I listened to a ululating muezzin from the nearby Jummah Mosque, right in the middle of Chinatown. Whew! Mauritius might very well be, as the Mauritian tourist bureau advertises, “The most cosmopolitan
island in the sun.”
“You are here for ze deep-sea feeshing?” queried Grenouille (Frog), a monied French drifter from nearby Réunion, with a surprising self-proclaimed moniker, who was staying at my guesthouse. Just beyond the coral reefs, the waters teemed with blue, black, and striped marlin; yellow-fin and skipjack tuna; sailfish; barracudas; sharks; dorado; and what have you. A virtual waterworld, Mauritius yet only reels in a couple thousand American tourists a year. Up everywhere were signs for “Deep Sea Safaris” and “Big Game Fishing.” With all that, Grenouille wondered why an American had come so far—to not catch fish.
But I was there to eat them. 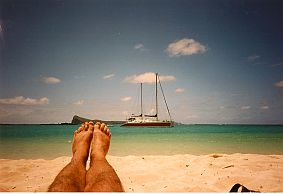 In fact, fish aside, Mauritian cuisine is as mixed as its people. One night at the inexpensive Café Péyrebere, evocative of a mini dim sum palace, I tried something a little different. Perusing the menu for
specialties such as smoked marlin, curried cerf (stag), and couer de palmiste (a.k.a. “millionaire’s salad,” made from the heart of a 7-year-old palm), I placed my order. The poker-faced Chinese waiter informed me,
“Sorry, no lobster. But we make you something extra special!” He cracked a  smile. “Okay, you try!” An hour later and still no dinner, I asked what exactly was this “special”dish. “Sacré chien!” The Chinaman beamed. I began to grow a little queasy. This, of course, is French for “sacred dog.” An adventurous eater, I still wasn’t sure I could dig into a poached pooch. Needless to say, as the waiter
removed the dome with a flourish, I was very relieved when the dish turned out to be not a steaming baked Airedale but just a kind of fish. The joke was on me—as it has been on many an unsuspecting customer before, I imagine. Time to check out the island’s stunning sand traps!

One morning after my habitual café au lait and flakey croissant, the sun sent out an open invitation, and I answered the call. In Mauritius you never have to go far: beaches are everywhere. “Very good bitch!” the “snacky cart” (street food) vendor enthused, handing me a roti and pointing across Péyrebere’s one main road: the Route Royale, lined with low-key restaurants, bars, and guest houses.Before me was a paradise—two of the best swimming beaches right in the center of town, one of which was marked “private.” By law, all beaches from the high tide to the low tide marks are public property. So ignoring all
the “Acces Interdit” (No Trespassing) and “Chien Dangereux” (Dangerous Dog) signs outside the seaside villas, I set up my sarong on the powdery white sand of the “plage privée” (private beach). The strand was nearly deserted,
except for a topless sunbathing woman. . . .  After a solid week of beachcombing and now bronzed as a Buddha, I hiked around the coast, passing small dhows bobbing like Champagne corks in the water, until I arrived at Cap Malheureux (Cape of Misfortune), the northernmost point where the Brits first landed. I plopped down and gazed out to sea. In the Impressionistic light, nearby Coin de Mire, a humpback-whale-shaped island, seemed to be swimming ashore. Farther out lay Flat Island (not flat), Round Island (not round), and Serpent Island (no snakes).

The sea beckoned—literally. For the idyll was broken by a small unseaworthy-looking vessel, an independent deep-sea fishing boat plying the waters for customers. It anchored, unloading a pair of sunburnt Afrikaners arguing in their queer-sounding argot, followed by their wily skipper—a Mauritian “Captain Stubing” in too-tight Speedo briefs. He jogged over with a gigantic book under one arm.
“You come with me to flat Island!” he demanded—no, encouraged—turning the pages of unfocused pictures of previous customers looking miserable on a Conrad-style tropical isle of some sort. “Very cheaps. We catch fish. We eat fish.” Smiling like a Cheshire Cat—no, a Blue Meanie—he tried the hard sell. Caught in the vise-like grip of the sun, I politely declined: “No thanks, I don’t fish.” 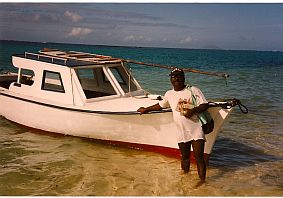 At last he shook my hand and motored off. But already I had regrets. I had missed my chance at a guaranteed misadventure. I couldn’t help but think he had popped back into the pages of an unpublished Kipling novel. After a few days of milling around and meeting some of the locals, my attention turned to the buzz of excitement building on the island. At last, Divali Day dawned.

I took an informal tour with the dour Monsieur Fan Fan and Ebrahim Tours. After the driver stopped in town to lengthily pick up a “beef paté baguette,” thus marking himself as a non-Hindu, we set off for the main “attractions.” First off was the 60-acre Sir Seewoosagur Ramgoolam Garden in the funnily named town of Pamplemousses (Grapefruits). In this transplanted Eden, in 1768, Pierre Poivre (Peter Pepper—really!) began to collect indigenous plants such as mahogany, ebony, lantania, and pandanus,
in addition to the ubiquitous palms. Next on the tour was the much-touted Trou aux Cerfs extinct volcano crater, looking like an Olympian coffee mug,followed by Mauritius’s number-one tourist attraction: the Chamarel Colored Earths—a mountain of multicolored mud straight out of Frank Herbert’s
sci-fi classic Dune. Finally we arrived at the sacred Hindu site of Grand Bassin (Great Pond),
a 66-foot-deep volcanic crater lake. Inside the onsite temple, Hindu worshipers in full regalia chanted; lit earthenware lamps to a plethora of elephant-trunked and multi-limbed gods; and made offerings to, among others, Lakshmi, the goddess of prosperity. They serenely smiled. Nobody seemed to mind that we had dropped by.

Wandering outside, I spotted a sari-clad Hindu woman and her daughter, splashing through the holy waters, which according to legend come from an underground stream directly linked to the Ganges. I stuck a tentative finger in the lake. Why not? Soon I was up to my knees in water. Later on that night my private thoughts turned to overt anticipation. As the celebrations began, I headed out with Grenouille and a group of travelers to the epicenter of activity: the Hindu village of Triolet. Like a bewildering mixture of Christmas, New Year’s, Fourth of July, and Halloween, Divali celebrates the victory of Rama over Ravana and Krishna’s destruction of the demon Narakasuran. As our nondescript van inched through the traffic, we stared out at Mauritian homes bedecked with Christmas lights, oil-burning lamps, and paper lanterns—homeowners trying to keep up with the Gandis by spending thousands of rupees on ostentatious displays.

Fireworks popped and sizzled. From loudspeakers, tinny nasal spiritual songs crackled. In the crush of so much humanity, the van halted. A grinning Ahab-bearded man wearing kurta pyjamas and a haji cap threw a roll of firecrackers onto the windshield. Then in the headlight beams we saw a father and son holding hands, while the kid swung, of all things, a gourd jack-o’-lantern with an evil grin.

The car horns chirped in the darkness like mechanical cicadas. We weren’t going anywhere. I’d come all the way to the other side of the world not only to not catch fish but to get stuck in a gnarly traffic jam.
Nevertheless, the festivities of Divali, the island’s primitive beauty, and the wonderful tumble of cultures held me fascinated. There were worse places to be stuck.