Well it was certainly authentic. However the positives arguably end there. Not so fresh from a 28 hour coach journey from Sapa, North Vietnam to Luang Nam Tha, North-West Laos, I booked with the first tour company that I stumbled upon, that was also the one nearest to my guesthouse. I thought equivalent £80 was a little steep but given the manager, the two guides, the driver, and the village chief all need to get paid, plus food for myself and two guides for two days it didn’t seem a totally unreasonable price.

Myself and my intrepid guide started out early the next morning. He took a quite laid back, and not in so much of a hurry approach to the food shopping aspect of the tour, that I thought may have been taken care of before I was picked up, but that’s just not how it works in Laos. Myself and my guide were dropped off about forty-five minutes outside of Luang Nam Tha to start our trek. It was at this stage that I was informed that the local guide who was to join us got a little tipsy the night before, (the second day of Laotian New Year) and wouldn’t be joining us. This would present further problems which I will touch upon in due course. Anyway another local lad was happy to take his place and carry the bags, although how he did it in just sandals I will never quite fathom.

After only a couple of stops for food and refreshments in the blistering 35 degree heat we arrived at the village, which was to say the least, remote. The villagers, that numbered about one hundred did not speak Laotian, only their local dialect so even my guide could not communicate with them despite them living just a thousand metres or so up a mountain from the main road. The village itself was clean enough, relatively speaking. The only buildings were well kept straw huts complete with solar panels for power. The village sustained itself by looking after cattle for local farmers and cattle dealers. There were dogs, cats, chickens, pigs and turkeys everywhere. Similarly, at a broad estimate every family had at least six or seven children and I would guess that this aspect of village life starts at quite a young age. My guide informed me that the children do not go to school. 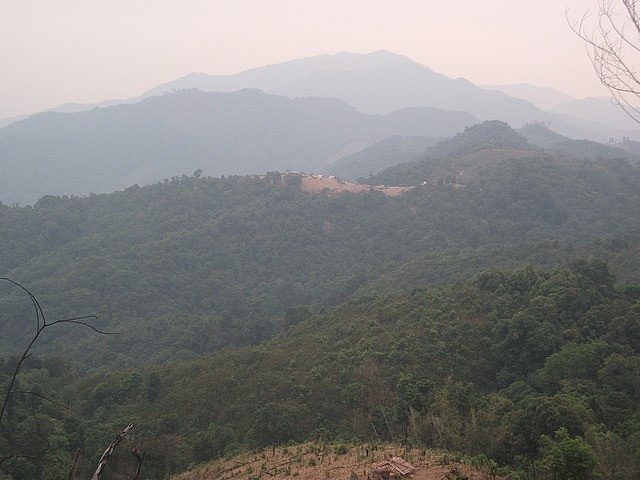 We arrived at our hut for the evening which was well kept and comfortable enough, sparsely furnished but certainly adequate in terms of space. There then followed a procession of villagers who came in to stare at us in turns. Well I imagine that there isn’t much else to do so that seemed fair enough. We were occasionally joined by various dogs, cats and chickens as well, who made their exit after various different amounts of loitering.

Then came the saga of my guide not being able to stay. My guide, it turned out, did not know the way back down by himself and needed to go to some kind of ceremony at his parents house that evening. He called his boss and a couple of hours later two local guides turned up to take him back. However they demanded equivalent £5 just for turning up, which my guide didn’t have. This was one of the stangest, if not the strangest, almost surreal situation I have ever been in. I did not feel in any way threatened or frightened, but I clearly had limited understanding of what was transpiring, and I could sense the heightened tension in the hut. My sanity was provided by our local sandal wearing bag carrier who seemed to sense my perplexion as we exchanged the occasional, “what the hell is going on?” glances.

So in the end this all got resolved. Although I am pretty sure one of the local guides somehow pilfered some money from my bag when I wasn’t looking. My original guide left with my sandal wearing friend after his hungover replacement turned up at about five in the afternoon. He cooked dinner, we were left alone and all was well, apart from the pulsating thunderstorm that kicked off at about four am. 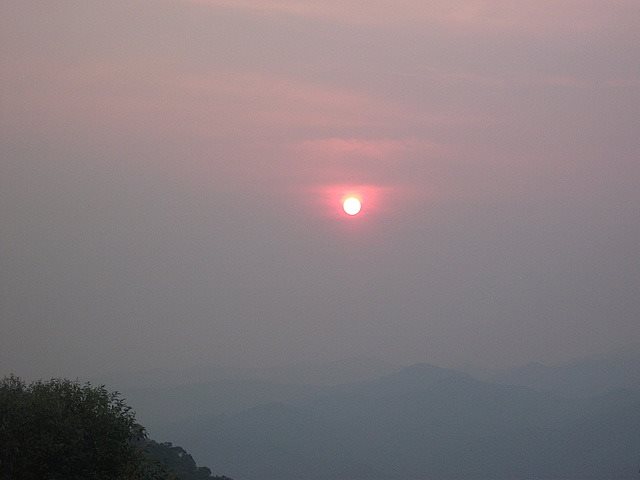 So onto day two and the descent. This was essentially fine apart from my new guide stopping to have a drink and something to smoke with a friend at a tiny hut. This man had two rather unfriendly dogs outside, and further one who he refused to remove straightaway after it got itself trapped, I assume to teach it some kind of lesson. It was all very weird, for want of a better word.

The tour finished at midday the next day after a total of 5 hours trekking at the most. I would mention that the scenery itself was beautiful lush jungle, and there were some sensational hillside views and a gorgeous sunset. That said, the logistics and frankly bizarre nature of the whole thing made me feel glad it was over.