Iran: The Jewel in the Desert

This trip was long anticipated and certainly somewhat arduous in the making. Five months, £800 before I had even left the UK, five hours at a London Embassy and thirty emails to a travel agent in Tehran later, I was finally on my way to Iran. Quotes such as “Watch list, ” “I think you’re crazy, ” and “Why?” were the norm when I told people of my intentions. But what did they know? If travel is about anything then it can occasionally be about transcending cultures and disproving misconceptions.

For all the paperwork required to enter Iran, the transfer from my Turkish Airlines flight to get through immigration was almost disappointingly smooth and hassle free. Similarly, despite the somewhat disconcerting event of Donald Trump being the first thing I heard on the radio when my transfer left Iman Khomeini international, and negotiating a roadblock on the motorway, I arrived safely at the Arad Hotel in central Tehran.

Independant travel for those with US, British, and Canadian passport holders is officially forbidden. However without going into too much detail, I was a little creative and found out that one guided tour in each city one vists will suffice to satisfy the long winded visa application process. Sure enough my Tehran guide arrived at my hotel and called through to my room to very politely announce that he was waiting for me. So far so good.

Keen to find out a few things about the current political situation, and the basis for Iran’s strained international relations with the West we had a brief conversation about both issues. Suffice to say that ubiquitous images of Ruhollah Khomeini, the revolution’s leader and current Ayatollah Ali Khamenei in quite literally in every square, tourist attraction, hotel and restaurant lend themselves to the idea that this is more of a dictatorship than a Republic. Similarly, in terms of the continual hostility to the US and the UK, this is primarily to do said nations with taking their oil, financial and medical sanctions, and the Israeli / Palestinian question. All that said, this is a travel article so I will leave this issue for the moment.

Having a guide was certainly very useful. We visited the Malek Museum which gives an excellent whirlwind overview of Iran’s history. Moving onto the nearby National Museum which is a modest building that houses artefacts from Persepolis, and more interesting hand made utensils dating back 2500- 3000 years. Normally I am not one for archaeology, but having a guide to explain the background in animated fashion, certainly added a much appreciated dimension to the day. Other significant sights in Tehran are the Jewel Musuem, the opulently decorated Golestan Palace, and the mind boggling bazaar which is a city within city – complete with mosques, banks and cafés within it’s 10km labyrinth of paths that lend itself to any kind of shopping that you could wish to do. 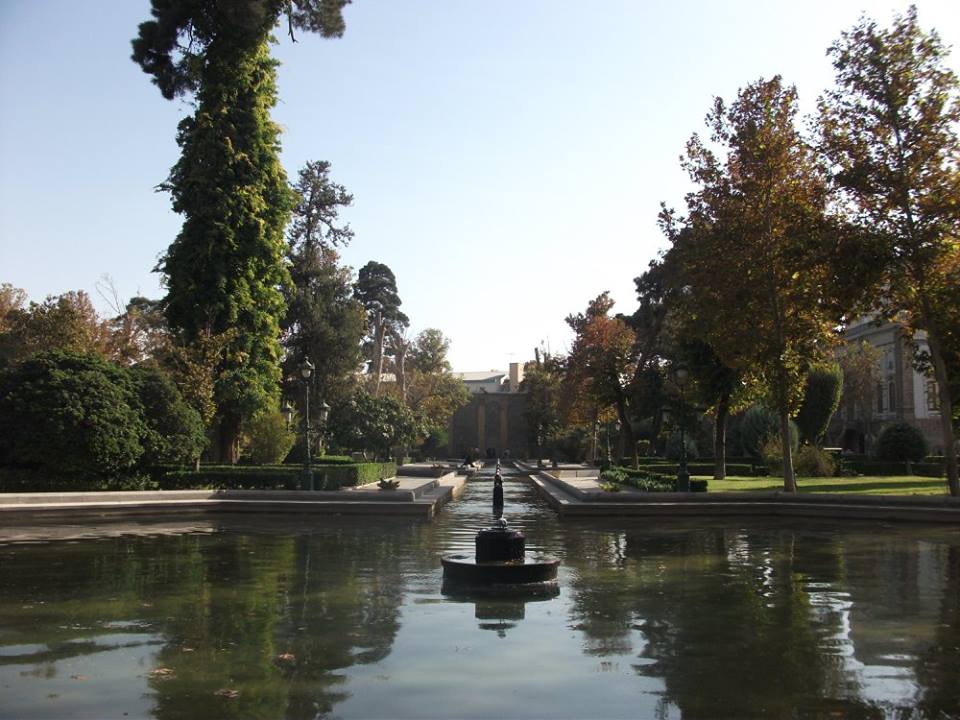 I had high expectations when it came to the friendliness of the Iranian people, and I was certainly not disappointed. When I informed my guide that I was taking a bus to Esfahan by myself, he turned up at my hotel at 7.30 am the next day, helped me buy the ticket, and asked a fellow passenger to arrange a taxi for me when we arrived. Now that is hospitality.

As mentioned, independant travel for US, UK and Canadian passport holders is forbidden therefore all tours and trips must be prebooked. This seems to mean that sizeable groups of anything up to twenty tourists from primarily the UK, France, Germany, Holland and Australia dominate the tourist scene. This does lead to everyone doing the same thing, and the money does not trickle down as it should  – with several hotels, a handful of restaurants, and tour agencies in each city accounting for most of the cashflow into the country from tourism. This is something of a shame, as the infrastructure is certainly in place for independant travel, and one hopes that this will change as time goes on.

Much heralded and relaxed Esfahan is one of those places like Kyoto, Paris, Rome, and New York that travellers worth their salt need to visit. It is a mecca (almost literally) of stunning mosques and palaces – all set around a UNESCO listed main square that I was reliably informed was once used for Polo matches – indeed the goal posts are still up. 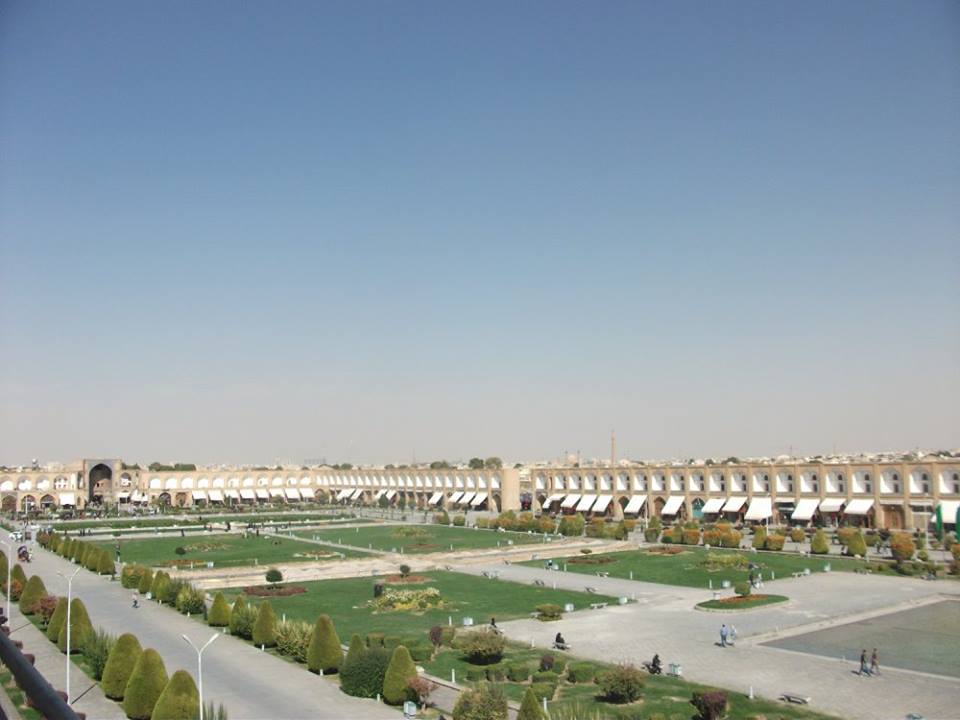 My first day in Esfahan was one of the best days sightseeing I have ever had. Of the sights around the Naqsh-e-Jahan Eman Square, the mosaic adourned Blue Mosque is breathtaking in its colours and architectural attraction. The Lotfullah Mosque nicely compliments this as it is more simplistic, with the focus on acoustics, and beautifully decorated domes with particularly eye catching turqoise tubing, lending itself to excellent photograph opportunities. The Jameh or Friday Mosque, a twenty minute walk from the main square was my personal favourite due to the 400 year old minnarets, and vast central square that was designed to be representative of Mecca. Away from the main sights, the Hasht Besesht Palace is perfect for strolling around the well manicured gardens, among the delightful atmosphere of picnics and relaxed games of volleyball.

Breathtaking sights aside I was well received by everyone from carpet sellers to money changers, who were delighted to meet tourists and implored me to tell more people to come to Iran. This really is a country whose people could not be more friendly and welcoming. 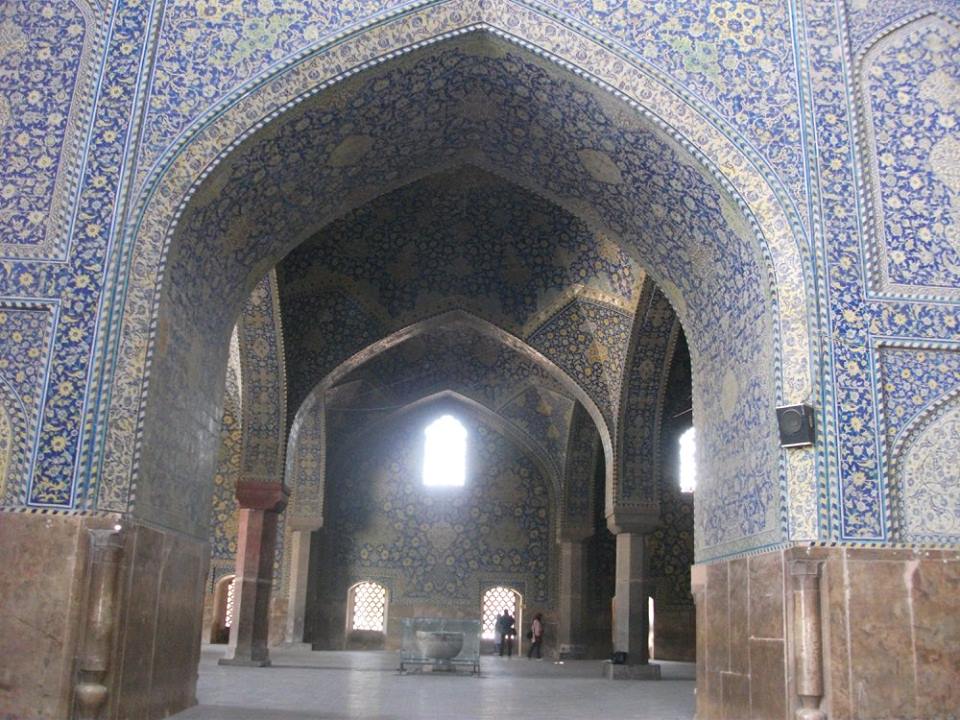 To give credit to the tourist authorities in Esfahan they have created enough to keep you there a further day. The main sights can be completed in one, albeit quite demanding day; therefore to keep people there a little longer it is important to provide further options. The Armenian Neighbourhood of Jolfa across the river does this in part – it’s main draw being the excellently curated Vank Church and Museum. Similarly the gardens along either side of the river are wonderfully well kept and make for a pleasant afternoon stroll. The bridges are also tastefully illuminated in the evenings, adding a fine extra attraction.

It seems that even in Iran, where the welcome could not be warmer, some (not all) taxi drivers prove the exception to the rule and think they can make up their own prices, but spirits undiminished I headed to Shiraz. The bus system is absolutely excellent – there is a choice of VIP or standard services at very good value for money prices given the high quality of service and comfort of the vehicles. The journey down to Shiraz was somewhat more scenic that from Tehran to Esfahan, with panoramic rolling mountains and valleys to gaze out at.

My day sightseeing in Shiraz was fantastic – largely due to the unbridled enthusiasm and thoroughness of my intrepid guide. We may not have been able to sit in the same part of a bus due to our opposite genders, but her bubblyness added so much to the day. I would say that for the confident and well organised traveller a guide is not essential, as there are plenty of signs in English and most people speak a little. However the relative cost to the value and interesting nature of the information provided made them more than worthwhile in my view. 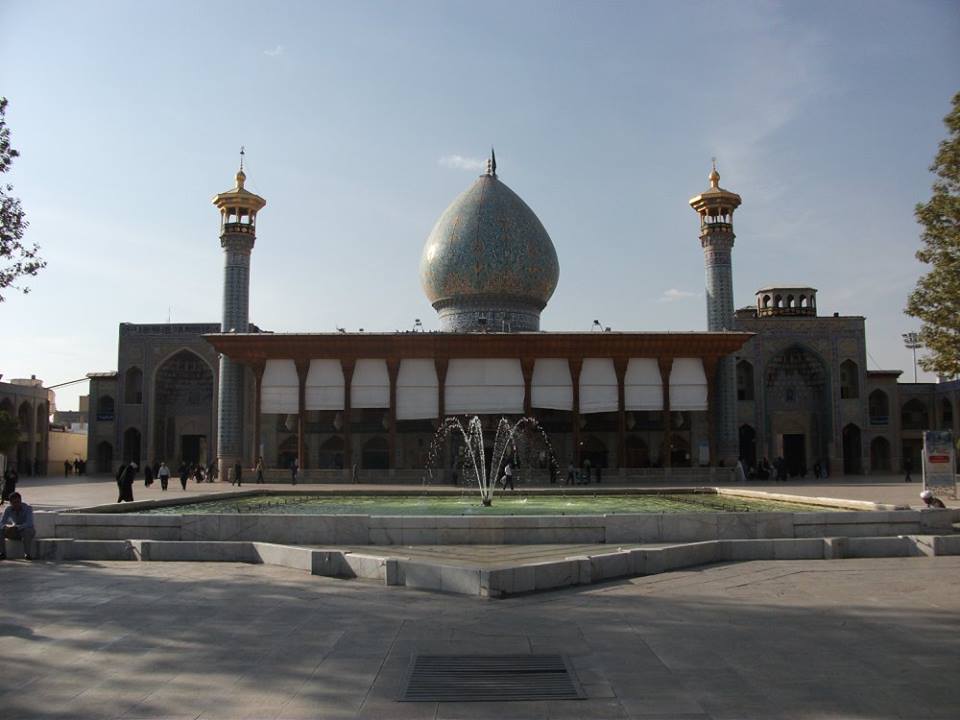 Much like Esfahan, the main sights are relatively close together and for the most part within walking distance of one another. The highlights for me were the brilliantly set up Hamman (bathing house) complete with lifelike mannequins, and the tombs of celebrated Iranian poets Hafez and Saadi. The saying goes, “If you want to love read Hafez, if you want to live read Saadi.” As something of a poet herself my guide spoke with great passion about Hafez in particular. Both shrines are beautifully set amongst tranquil gardens, which are a short taxi journey from the centre of the city. 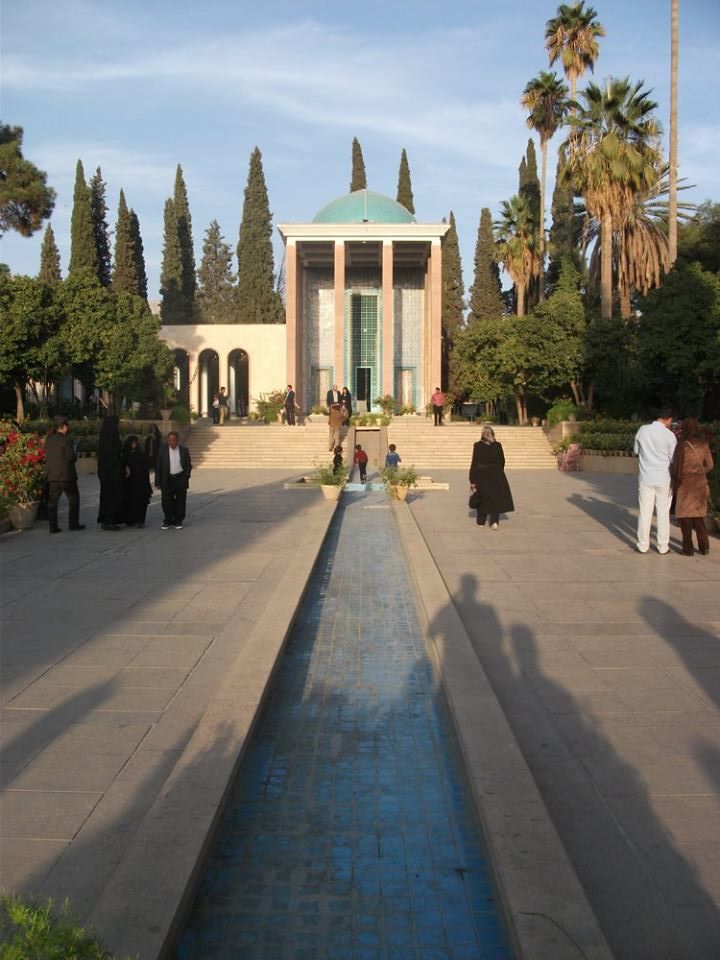 Shiraz (17th Century) and Esfahan (16th Century) were both previously capitals of Iran, and the sense of creativity that is manifested in the architecture, sculptues, paintings, and poetry that one comes across is largely due to the arts being celebrated and funded by the regimes at the time. It is wonderful that these are now drawing an increasing number of tourists to these cities to take in the blend of European, Indian, Oriental and Far Eastern cultures, that are prevalent in the works of the artists of the respective periods. 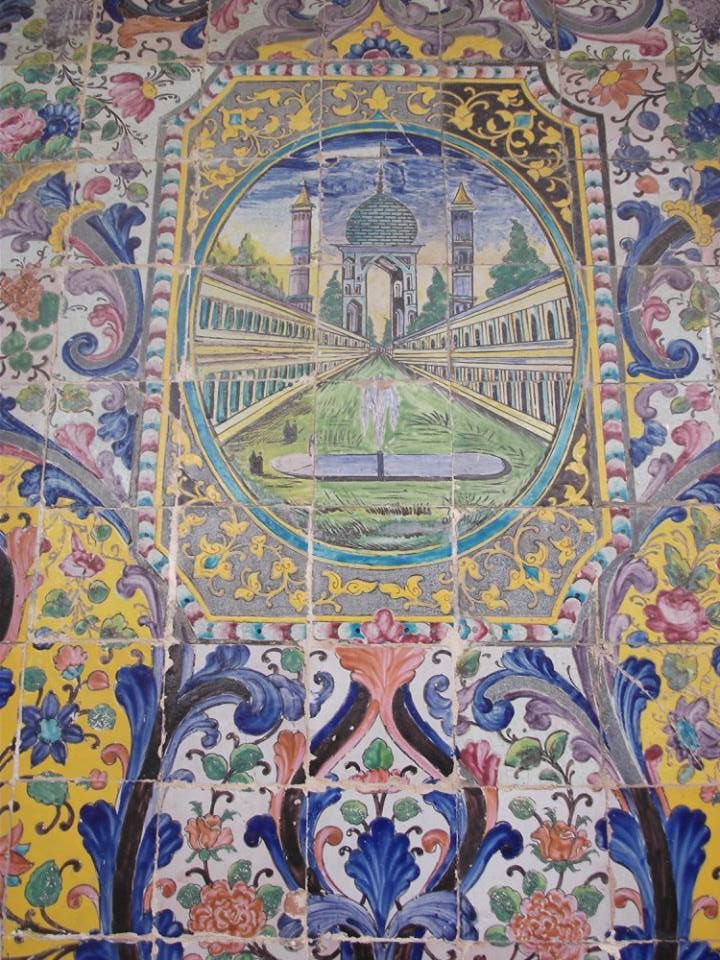 The ancient ruins at Persepolis are simply a must. It is the scale of the sight and implied grandeur of the period (330 BC) that strike a chord. The murals under the walkway at the end of the tour are particularly well preserved and impressive, giving one an insight into life at the palace during the period. Nearby Necropolis is also a must see that boasts depictions and carvings that are slightly better preserved than those at Persepolis and tell of mythical tales. 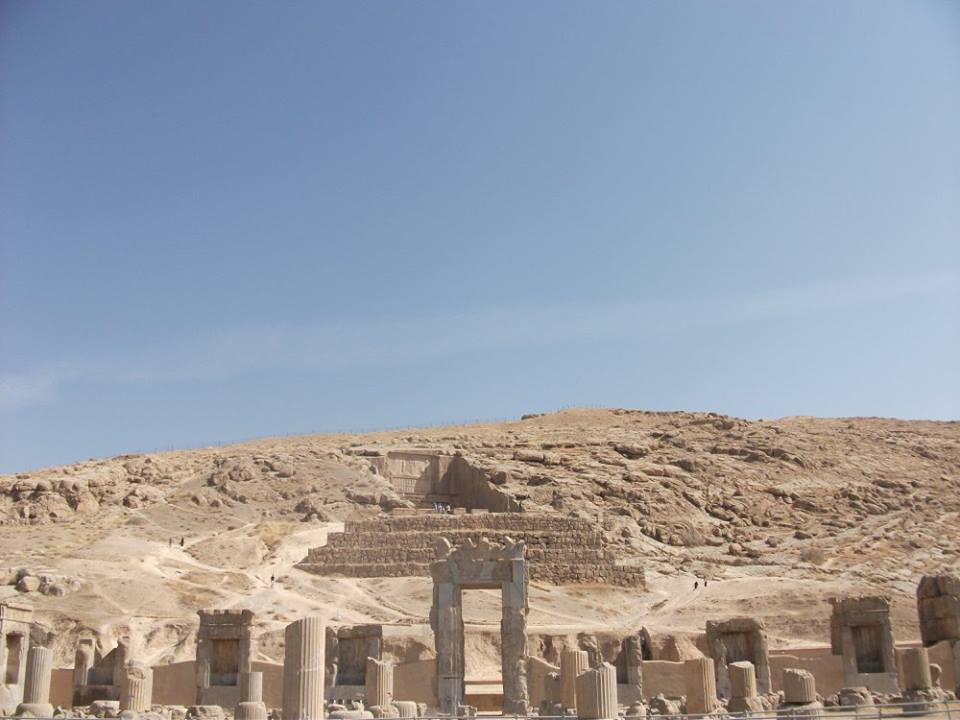 The best time to visit Iran is May or late October. The heat is intense and must be extremely difficult to bear during the height of summer. That being the case, given that I visited at the supposed height of the tourist season, the standard of the sights and attractions, there should simply be more people here – it is only Iran’s perception in the West that is holding it back in this regard in my view.

It would be remiss of me not to mention several things did make me a little uncomfortable. The pictures of the Ayatollah and Iman Khomeini did for me at least, give the impression that one is always being watched, and there is no doubt that the current regime is undemocratic and dissenters are dealt with harshly. Similarly legislation around gay and in some cases human rights are certainly not those of a progressive society.

All that said, prior to my visit I would not have thought that Iran would be somewhere to visit twice, but I cannot wait to go back. The little things such as all people that you come into contact with being thrilled that you are visiting their country, the smiles of strangers and shopkeepers, complete with world class attractions and sight seeing make Iran a welcoming, intriguing, absolutely safe, and wonderful country to visit. 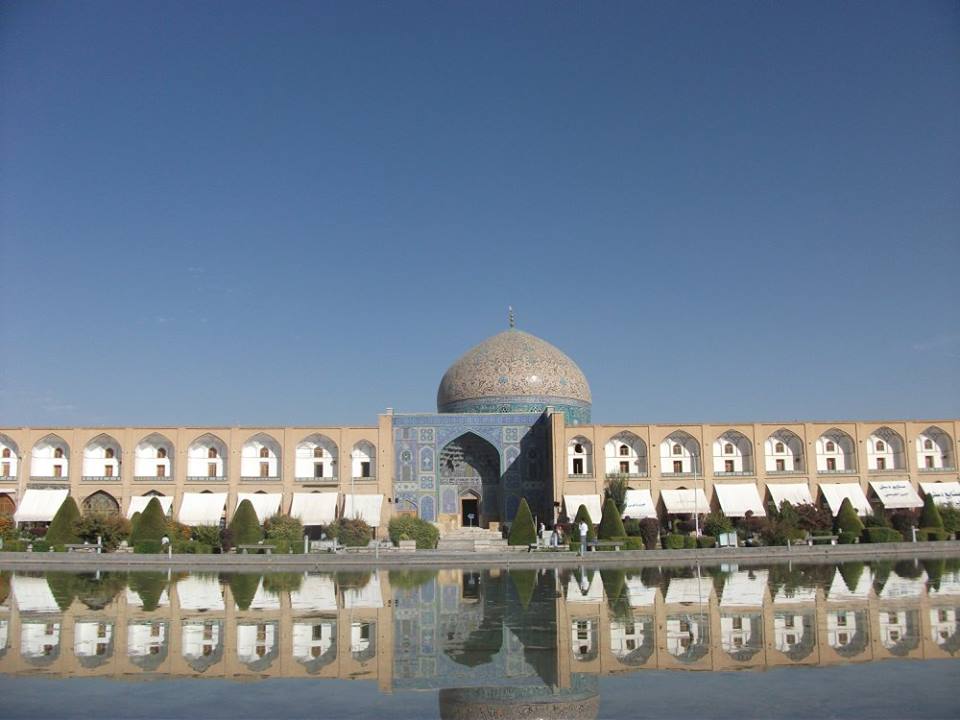 The agency I used was Yadaman Travel in Tehran who were outstandingly helpful and friendly.
http://yadmantravel.ir/en/home-page