I turned my head to face the window and immediately sensed something overhead. My eyes instinctively glanced out and slightly upward. There it was, the Big Buddha towering over me as the #2 bus I was riding in swirled around the narrow and winding road on its way to Po Lin Monastery on Hong Kong’s Lantau Island.

The guidebook was right, telling me to be sure to get a window seat on the right side of the bus. For that, I was rewarded for the last ten minutes of the ride with a sight of “Tian Tan,” as the Big Buddha is called, from underneath looking up, enabling me to appreciate all of its splendor from bottom to top, front to back.

It’s Friday morning and I start out at Pier 6 in Hong Kong’s Central District, paying $21HK for the 50 minute ferry boat ride to Lantau.. The boat is less than one-half full, and most of the riders appear to be locals.

I follow the crowd after alighting the boat at Mui Wo Pier (Silvermine Bay). A walk of about 100 yards takes me to the bus stop where I get into a line of waiting passengers. No more than five minutes later, the bus comes, the #2 Po Lin Monastery. The group of four ahead of me quickly learns from the bus driver that they need to have the exact fare and since they don’t have that they are denied entry onto the bus. Luckily, I have an Octopus card, good for bus, subway and ferry transportation in Hong Kong, Kowloon, and surrounding areas. The fare? $16HK today but is $25HK on Sundays and Holidays. 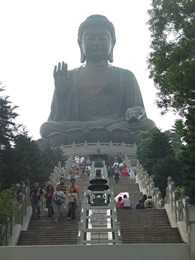 Soon the bus slowly climbs a small hill, and within minutes it goes downhill, and around, and then up another hill, and still another, repeating the process not unlike that of a merry-go-around ride. Although the speed is not fast by any means, only about 20 miles per hour, the narrow two-way lane makes me imagine the ride Cary Grant and Grace Kelly took in the south of France in the movie It Takes A Thief. Actually, there are stops along the way as the road gets so narrow that either the bus I am riding in or the one coming in the opposite way has to pull over the side to allow the other to pass. Surely the next guidebook to be published on Hong Kong should include this bus ride, lasting forty minutes of fun and anticipation, as one not to be missed.

They say most urban Hongkongers have never visited Lantau. And I can see why.On the ride I pass little villages and hamlets that seem never to have come of age since the 1950’s. Very tiny and short buildings, some used both residentially and commercially, date back some fifty years, when Hong Kong and Kowloon had just begun to be the primary destination for Chinese mainlanders wishing to leave the regime that had come to power. Little has changed, except the young have gone to the city for schooling and jobs. One can find this island a peaceful retreat, to read, to write, to reflect, to simply let time and the rest of the world pass.

At the ticket purchase office for Buddha, I opt for the admission fee with meal, for $23HK. And there it is, Big Buddha! Never mind the exact measurements of its height or weight. It is huge, billed as “the biggest outdoor and seated Buddha in the world.” A sight to behold. There are about 300 steps to walk up to get nearer to Buddha but I don’t bother to count. Just make the trip up at your own pace, and turn around to take in the panoramic view of the surrounding forested areas interpersed with the monastery and other structures.

Standing next to Buddha, I get a very solemn feeling. I reflect on what I know about Buddhism. Even if you are not a Buddhist, as long as you have respect for religion and traditional philosophy, you will get that same feeling. Others near me marvel at the structure, it with its right hand raised up from the elbow, palm fanning outward and its left hand with its opened palm facing up. Its facial gesture seems to convey the message to all who will pay heed, “Do not worry. Everything will be alright.” 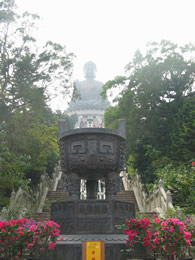 The walk down is much easier and quicker. Po Lin Monastery (“Precious Lotus”) is directly opposite a group of gold, green and red structures. I go into the courtyard and give the meal ticket to one of the many women servers behind the counter. She quickly fills a plate with generous portions of a variety of vegetarian food (“jai”) and cakes.

On the return trip, I take the #23 bus (fare $16HK) to the Tung Chung MTR Station, from which subway connections can be made to points in Hong Kong or Kowloon and the fantastic view of the harbor and Hong Kong skyline awaits.