Heidelberg: A beautiful small town on the Neckar River

Seeing as my one previous touch down in Germany was a brief transit through Munich Airport in 2005, I thought it high time I visited what is one of the preeminent global nations for a more considerable period. I am not usually a huge fan of articles that start “Top 17 places… etc etc” However I did stumble across an article entitled something along the lines of Top 8 Cities in Germany and Heidelberg, as a picturesque university town with a smattering of good museums and an architecturally attractive old town seemed to fit the bill.

Roughly equidistant between Stuttgart and Frankfurt, visitors to Heidelberg have the choice of either airport. Choosing Stuttgart, I would say a little research is required to find out how to locate the main train station from the local hub (there is a major difference which I will touch on later on). The short answer is look down and follow the yellow line.

The German rail system is generally excellent and I arrived in Heidelberg with a relative minimum of fuss. During previous journeying I have always found Germans to be friendly and pleasant and this was certainly the case with the various people I asked for directions to locate my hotel. All in all a good start.

Heidelberg is a beautiful place, there is no doubt about that. Set on either of the Neckar River in a small valley surrounded by hillside forests, it is certainly romantic and has something of the German Forest Fairytale charm about it. With well kept green lawns across the bridge, an availability of peaceful forested hillside walks and small treks, and generous open spaces in the old town, it is very easy to see why it lends itself so well to study and learning – thus the dominance that the university and vast student population has on the town’s life. 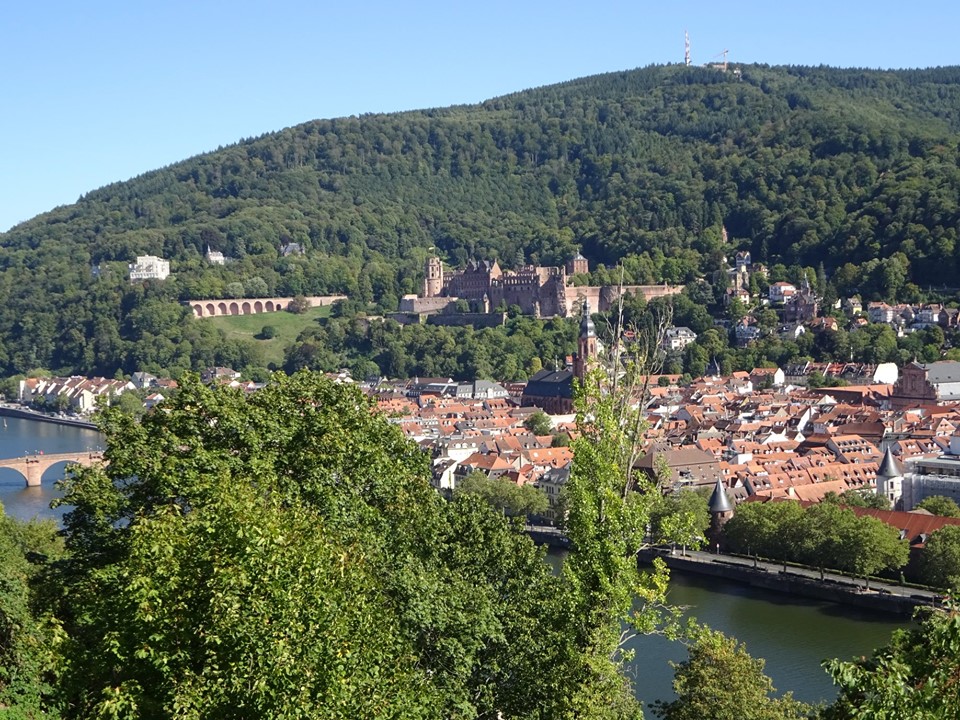 German culture (both traditional and contemporary) is very strong here – this is particularly manifested in restaurant and pub signage, medieval architecture and moreover if one veers a little off the main tourist areas the number of off beat dive bars (where you can still smoke inside by the way). The combination of the youthful vibe of the town and the old worldliness of the buildings and architecture makes for an intriguing and tranquil atmosphere. I would actually compare it a little to Kyoto in Japan, in terms of strength of culture combined with a modern edge – and like Kyoto there is a Philosopher’s Walk.

Architecturally speaking the baroque style was more dominant than gothic which I was a little surprised at. The number of buildings with Meditteranean style shutters is also an interesting variation which perhaps goes to the generally warm climate – I did notice that despite the high temperatures one is rarely fully exposed to the sun due to the narrowness of streets. 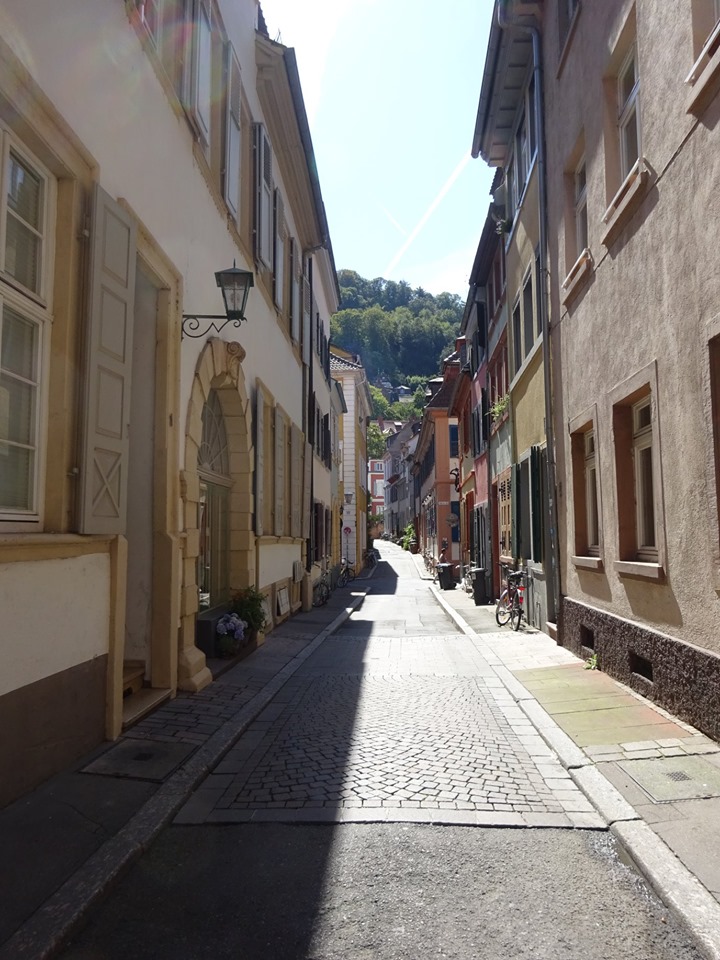 Of the main sights, the Palatinate Museum and Kurpfälzisches Museum share a site and is incredible value for 3 Euros as it houses a seemingly never ending collection of high calibre German and Italian art predominantly from the Palatinate era (1589 – 1687). The undoubted highlight of my time here was being fortunate enough to witness a professional pianist sublimely playing some Mozart on an 18th Century piano. The Kurpfälzisches Museum boasts more contemporary paintings of landscapes while the Palatinate houses portraits of the key protagonists of the era as well a fine collection of ornate furniture and interior items.

The Churches of the Holy Spirit and Peter respectively are both certainly worth a visit – that is Peter not St Peter as I was instantly corrected when I asked. The interior gothic architecture is impressive as are the traditional organs and similarly both have striking stain glass windows. These are Protestant Churches of course and the contrast between the more iconography orientated and grand decor of Catholic against the more simplistic nature of Protestant Churches is quite striking.

The Student Prison was my favourite site. This dates from the 19th Century when the University held jurisdiction over the punishment of its students. I say jurisdiction in quite a loose sense as those “sent to prison” could still attend lectures, receive food and study and were generally kept for a night or two, occasionally a week for their generally drunken misdemeanours perpetrated around the town. Spending time here was considered something of a rite of passage. As you can see, inmates spent their time creatively decorating the walls and furniture. 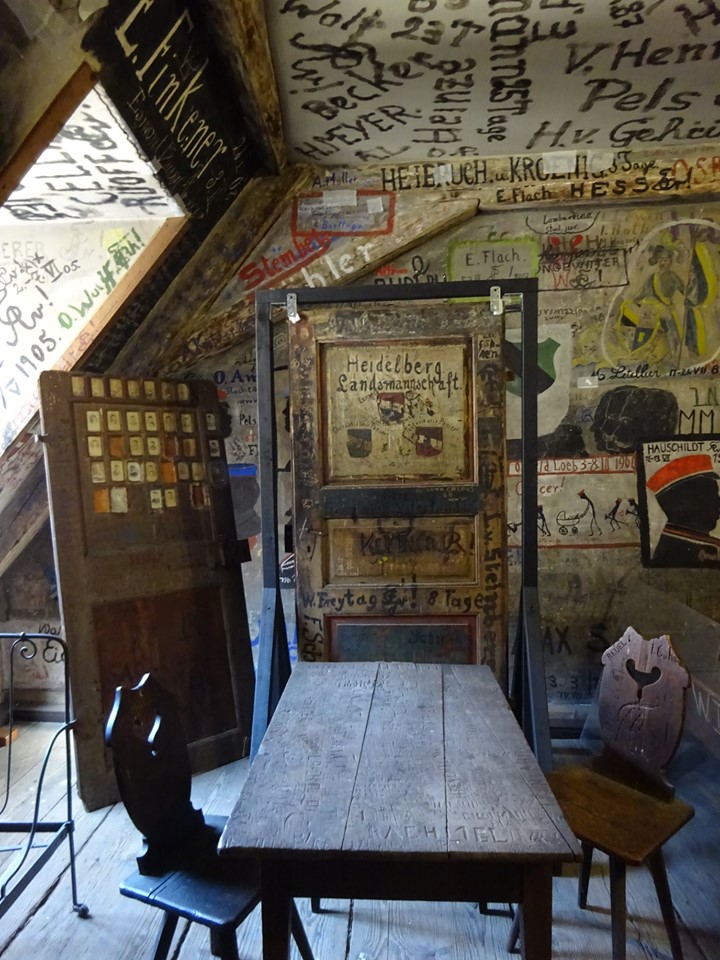 As is often the case I found that a small detour away from the main tourist area (Hauptstrasse) was a worthwhile undertaking. I found quiet, narrow winding streets, old college buildings and the grand student library and several relaxing open spaces – perfect for study and discussion. 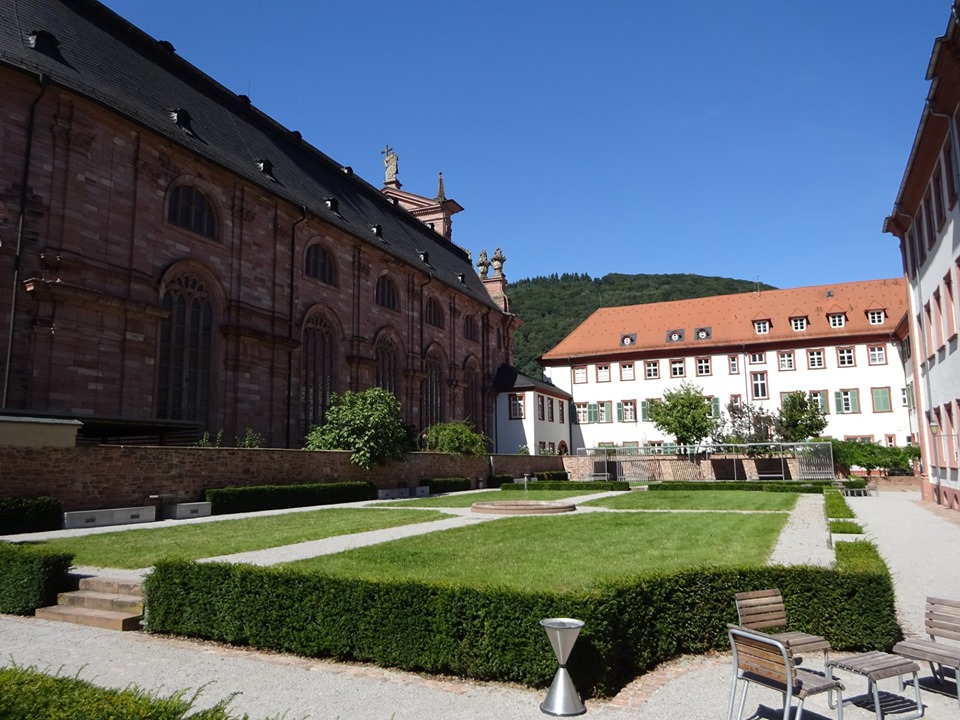 Heidelberg Castle looks over the town and is reached via a short, steep walk or taking the (somewhat decadent) funicular. It dates from the 13th Century but was severely damaged by a lightning bolt in 1537, before being rebuilt and expanded through the 17th Century. However the Castle was abandoned following a fire in 1764 and remains uninhabited to this day. 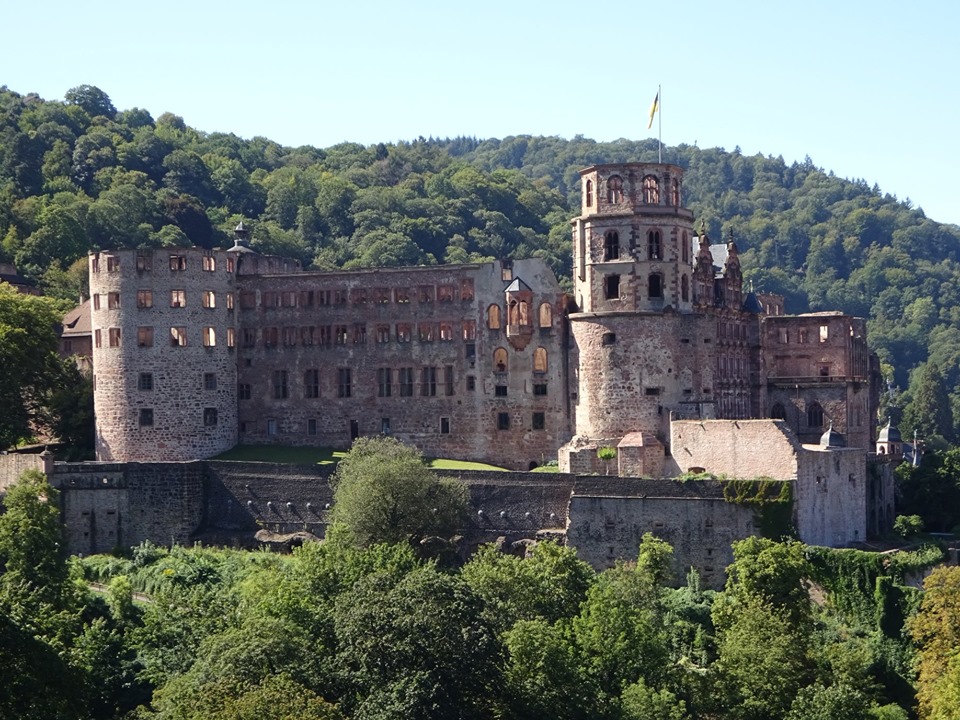 Visitors are obliged to take a guided tour to enter the interior rooms (which to be honest I didn’t think there were enough patrons to justify) therefore the main attraction if you do not wish to do this is the impressive courtyard and its slightly Vatican like, heavily Italian influenced architecture. I would certainly recommend the audio guide here for interesting information on the castle’s inhabitants and history of the buildings. The total of 13 Euros for an audio guide or guided tour (5 Euros) and charge to enter the grounds and courtyard (8 Euros) was a little steep for me but nonetheless the Castle is a must visit for History and architecture buffs.

The Castle is also home to the well curated and informative German History of Medicine Museum (included with the ticket price) which gives something of a whirlwind tour of the practise of researching, manufacturing and selling of medicines throughout the ages. 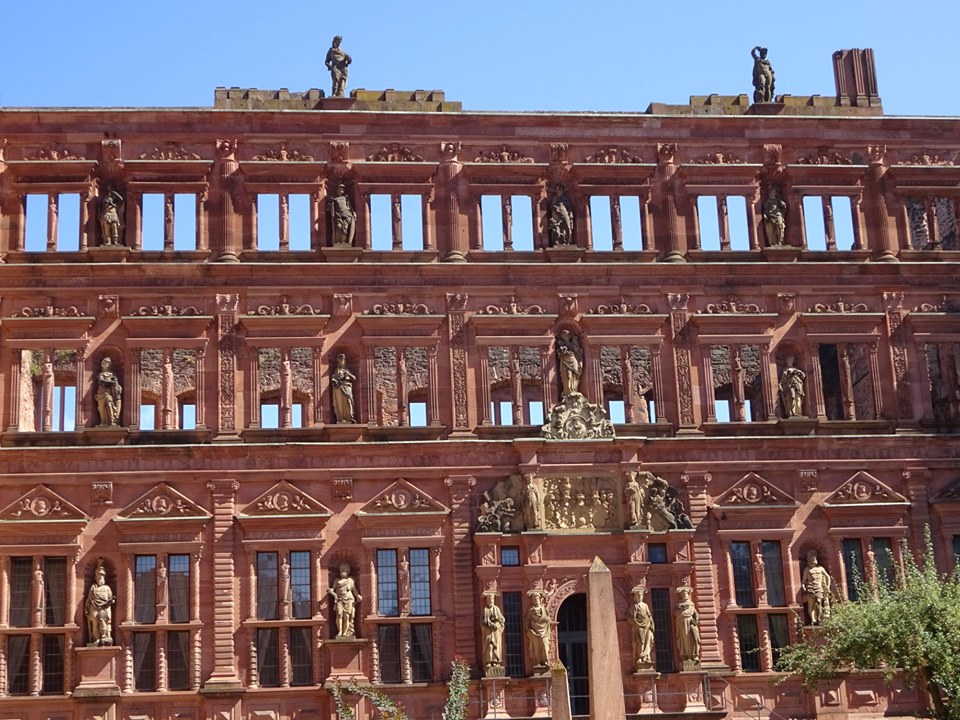 The Philosopher’s Walk is located across the river and is one of several gentle, and some less gentle walking and hiking trails which are perfect to while away an afternoon (sitting with a book or otherwise). One can certainly imagine students and professors strolling here to find some solitude. The shady walkways act as a pleasant contrast to the traditional sightseeing offered by the old town. I unfortunately did not make it all the way to the top of the Heiligenberg – however I was subsequently told that if one does there are two old monasteries dating from the 11th Century, a Nazi era open air amphitheatre and the remains of Celtic Hill Fort (4th Century). 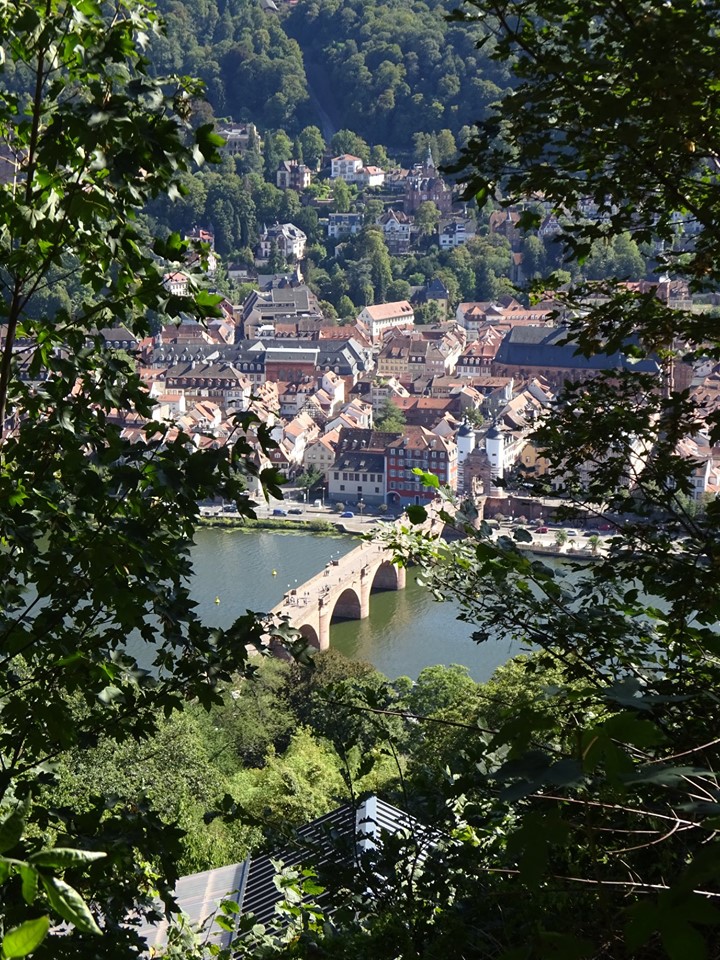 To summarise, Heidelberg, while it perhaps lacks an edge that a bigger, more industrial city such as Berlin or Hamburg would undoubtedly provide, if you are after a relaxing city German break with a solid combination of traditional sightseeing and walking options, as well as numerous good quality restaurants and pubs then this will make for a brilliant short break.

Eat at: Osteria Alfredo – a small, family run,  great value for money Italian serving healthy portions of pastas and pizzas. For something more traditionally German try the Sudpfanne Hotel and Restaurant on the Haupstrasse.

Drink at: Leave the main drag and meander around to find one of the great dive bars – down the hill from the Church of the Holy Spirit.
Also: The terrace bar across the river by the Karl Theodor Brucke.

Stay at: Accommodation can be pricey – my advice would be to book early, slightly out of season and shop around.

(Note: The Prinzhorn Collection Museum is closed for renovations until Spring 2020).

A brief side note here. I believe I got lucky with my tickets as I latterly found out there is a difference between local trains and longer distance ICE Trains. Tickets for local trains to the same destination are considerably cheaper than the plusher ICE Trains. The likelihood is that as a tourist you would get away with it but I would certainly suggest booking in advance and looking out for deals as potentially getting stuck with a 60 Euro on the spot fine or being forced to take a two hour trip instead of a 40 minute one would of course not be ideal.