Hanging out at Harry’s in Phnom Penh, Cambodia

Whether you are visiting for a while or living overseas you need to find a local watering hole that fits your personality and interests. Somewhere that is comfortable and where they know – and tolerate – you. So when I moved to Phnom Penh it was the third thing on my to-do list immediately after finding an apartment and unpacking.

There is no shortage of bars, restaurants and cafes in the Kingdom. Consequently, I ate and drank my way through them, looking for places to revisit. Street 172 is only about five or six blocks long, but it represents the heart of the backpacker area. And my apartment was an eightminute bike-ride away.

Eureka. I found the Sundance Inn and Saloon. It is run by a guy named Harry, originally from Texas, although he almost sounds Australian.  He has been in the hospitality business most of his life and when I asked him about the origins of Sundance he said, “I set up the sort of bar I’d want to drink at.”

What I like about Sundance is the laissez-faire approach. The sign in the toilet said “No drugs, no guns, no prostitution” and that about sums it up. Everything else is fair game.

Harry has a free-pour policy. Translated that means that the drinks at Sundance aren’t dribbled into chintzy-little measures and escalated to exorbitant prices. When you order a gin and tonic, you get a massive amount of the first and a bit of the second.

And Sundance has Caesars. This Canadian-born cocktail is a vodka-based creation with clamato  – a mixture of tomato juice and clam broth – and topped with hot sauce and Worcestershire. But be careful – very careful – of these babies as they sneak up and whack you on the back of the head. My friend Ross and I got into them one night. Rory – the bartender – later told me I asked him if I was drunk five. He said that after the fifthtime he knew it wouldn’t be long before I would get a driver to load my bicycle into his tuk-  tuk and take me home. He was right.

Got drunk and forget to pay the bill? No problem as people can settle up the next time they saunter into the bar.

There is an interesting range of people who make Sundance their local.  And they are all characters who have their stories. Some of them are interesting, like the guy who was biking across South East Asia; others are pathetic, like the outdated hippie who has overstayed his visa for five years and takes no responsibility for anything.

Some are sexpats with their Khmer girlfriends, others are berang – aka foreigners – who live in the area and then there are the backpackers who come and go. Another regular is Kuesera – almost like the song –who flits in and out, but doesn’t stay long. He is an older, shriveled peddler who speaks English and sells very badly made little bags from Thailand that nobody ever wants to buy. But he is sort of an icon. I would give him a couple of dollars at the beginning of the month as his “salary” rather than flicking him a bit of money when he always said business was bad.

Going to Sundance as a single woman was never a problem. I would hop up on a bar stool and talk to whoever was around, read my book or go outside and sit by the pool.

As well as the social aspects of Sundance, there are also things to do. First of all, the pool table is front and center and somebody is always playing. Some of the girls who work and/or hang out there are little sharks and beat the macho-types, which is always good to see.

Then there is the four-stroke pool outside in the courtyard. It is free for customer use so you can buy a cup of coffee at 09:00 in the morning and spend the whole day hanging out there. Tuesday night is Open Mic. So if you have some musical talent – or even if you don’t – step up and loosen those vocal cords. You might have to elbow ‘Frisco Tony – singer, actor, poet and general man about town – out of the way, though. 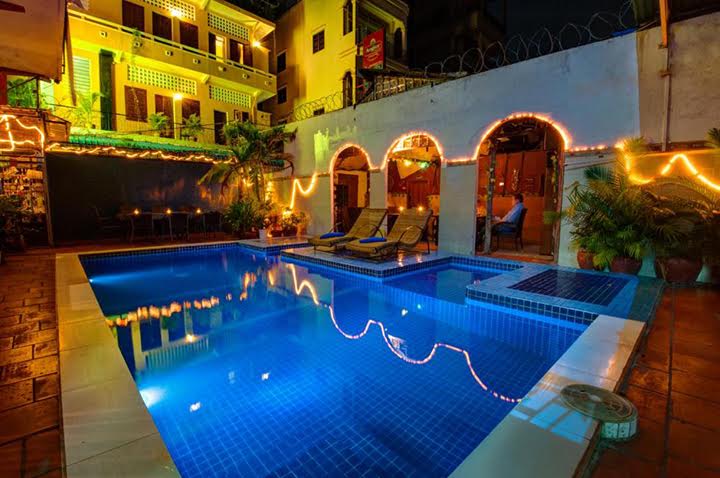 There are bicycles to rent. Or little motorcycles. Even if you don’t have a valid driving permit it doesn’t matter in the Kingdom.

Cranked up music. But a quiet request – complete with a don’t-mess-with-me look at the bartender – will decrease the volume.

So when you find yourself in the capital, head for Sundance at # 62 Street 172 and enjoy a bar that has attitude.

Jody Hanson is an insufferable travel junkie who has visit 107 countries – 67 on her own – lived in nine and holds passports in three. She has visited all the countries in North, Central and South America except for Venezuela, Guyana, Surname and French Guinea. She wrote this article on behalf of Tucan Travel who offer all types of travel excursions to Cambodia and all over Southeast Asia.