Halloween in the Big Easy: New Orleans at Halloween

If you are a person who really enjoys dressing up for Halloween, spending the holiday in New Orleans is an unparalleled experience. You can find a Halloween party in every city, but In New Orleans you will find a street party with some of the most elaborate and exotic costumes imaginable. You will see people shop for groceries and eat brunch in costume. In New Orleans, Halloween is on.

Staying in the French Quarter is your best bet. If you prefer accommodations where you can cook your own food, try the St. Phillip French Quarter Apartments. They have kitchens, and are only a few blocks away from all the action. If a bed and breakfast is more your style, you will find several on the Rue Royal which is arguably one of the most beautiful streets in the quarter. Check out The Cornstalk Hotel, or The Andrew Jackson Hotel (reportedly haunted if you want to up the scare factor). Both are located on Rue Royal right in the heart of the quarter. 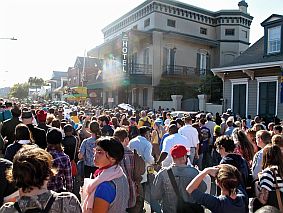 Brunch at the Green Goddess is a great place to start. The restaurant has a mix of southern and global fare, and my mimosa with guava juice washed down pork belly surprisingly well. Some friendly locals at the table next to mine told me that the sheep’s cheese was a good choice, and having taken that advice, I would have to agree. For an inexpensive dinner, try Coops. Located on Decatur Street, this is a place where you can get some legitimate southern fare while paying about 10 dollars per dinner entrée. The Cajun chicken and Jambalaya will give you a real taste of the region. Sure there is always a line, but the tables turn over fast.

Another great brunch spot is called The Country Club in the Marigny neighborhood, right next to the French quarter. You can walk there in a bout 30 minutes while checking out some of the beautiful and quaint 19th century original homes. There is plenty of history here. The portion of Marigny away from the river was sometimes called “New Marigny” and in the early 19th century was where white Creole gentlemen set up households for their mistresses of color, and their offspring.

The country club serves bottom less mimosas, as well as Southern and American fare. There is also a clothing optional pool in the back for the adventurous. When you are done with brunch, there are several junk shops on the adjacent corner where you can deck yourself out in vintage Mardi Gras finery, or put together a very unique costume. 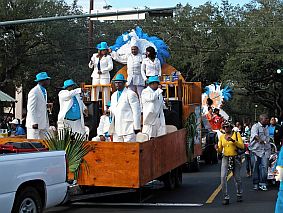 Fifi Mahoney’s also on Rue Royal is well worth a visit. This wig store has one of the most diverse and interesting collections of wigs, and a helpful staff that will help fit you with the one that is just right. This is a great place to get outfitted for late night escapades.

At night check out the scene on Bourbon Street and take in all the costumed revelers. If you would prefer live music, The Voodoo music experience has been happening in the city sine 1999, and was headlined this year Soundgarden. Many of the smaller venues also host acts from all over the country, and you can see some great up and coming bands on some of the music venues in the side streets of the French quarter. Stumble home and get some rest…the weekend isn’t over yet!

Halloween weekend is also host to one of the city’s most famous second lines, The Women of Class parade. For this festive occasion, every one marches and no one looks on from the sidelines. So take a cab from the French quarter. It is a great way to break away from the touristy stuff, and mingle with some locals. Its also a great place to drink two dollar beers being sold by men standing on trucks with megaphones, and to hear some real New Orleans jazz via the marching bands. Not to be missed. 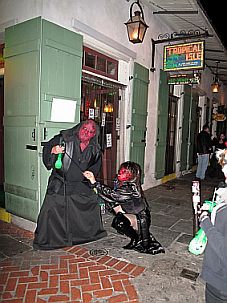