To many visitors, the Galápagos Islands remain the image of a paradise; a mythical place -so symbolic in essence- like a child’s dream that beckons, beyond the wildest imagination. They rise like an oasis of life, in the middle of the expanse of the Pacific Ocean. They are forever, a magical speck of land inhabited by famous and fearless animals, survivals of another place and time who live in total harmony with nature. A place so far away from the confines of civilization, that it must have been chosen by the gods to be a haven of peace, innocence, and beauty. As well as a beacon of hope and bewilderment; in short, the perfect garden of Eden.

I visited Ecuador when I backpacked around South America, 36 years ago but I was too broke then to afford the flight to the Galápagos. I never took these islands off my bucket list, though. “Dreams are not negotiable”, wrote Paulo Coelho. ‘Las Islas Encantadas’ (enchanted islands) was the first name given to these young islands, formed 3 to 5 million years ago and that moniker alone evokes the magical aura that has always surrounded them. They seem to rise like shadows upon the sea, one from another. Amid the volcanic geography of these 61 islands and islets (13
main and 4 inhabited), plant takes root in basalt rock, giant tortoises roam, and Penguins who hail from Antarctica swim in Equatorial waters, 600 miles from the South American continent.

A trip to the Galápagos Islands will be the journey of a lifetime, I had told my travel companion and 14 years old son Nicolas, in the months prior to our odyssey in Ecuador. We had left the Quito’s airport earlier in the morning. We finally arrived in Puerto Aroya, after a short boat crossing from the main airport in Baltra and a 2 hours bus ride across the island of Santa Cruz. There in the harbor, our new home and ‘theatre of dreams’ for the next 8 days was rocking gently on the turquoise sea. Lunch time was becoming and it appeared that every one of the 16 passengers was by now, eager to pay respect to the Galaxy II Eco Catamaran’s chef.

This brand new vessel should have been named Amphitrite, for the goddess queen of the sea. If you ever witnessed a 375 tons Catamaran going up to 11 knots through a rugged sea, with her twin 350 horse Cummins engines, that is a sight to behold. Poseidon would concur. The chef hailed from the Amazon and his father was a Shaman
(medicine man) who had 12 wives and 36 offspring. He called himself Julian, short for Sumby Ñash Kiacua Warambaza Kiaruty Chahipury, which was arguably quite a mouthful. He was quite adept at turning simple ingredients into a delightful fare, fit for a pauper or a king. With his top hat and crocks, he walked around the ship with the quiet assurance that his wholesome cooking was as important as the stars at night dancing in the Equatorial sky. The Ecuadorian ‘ceviche’ that he prepared live in front of us one evening, was from another constellation.

The reason I liked this country so much since my first visit, suddenly dwelled on me: its people are just so easy going and content with what they have, whatever that may be. They are respectful, approachable, and always ready to share a laugh or to give you a helping hand.

The Galaxy I has been operating in the islands for 15 years and it was time to build her a brand new sibling. The Galaxy II Eco catamaran was commissioned to be a new eco-friendly version of her sister and had been, at the time of our cruise, operational for 5 months. She was built based on ecological parameters with the main purpose being to reduce the negative environmental impact of tourism. It is pretty much self-sufficient, save for the Diesel. She does however has the lowest consumption of all the first class vessels of 16 passengers. A desalinator takes care of all the water needs, including the drinking water. Grey water is then treated before being released into the sea.
Furthermore, the use of nontoxic refrigerants, bio-degradable cleaning products, lead free paint and the minimum amount of wood in its construction, in addition to diverse energy savings help in achieving these conservation goals.

While there are a great number of issues facing the fragile environment of the Galápagos, there are success stories and potential solutions as well. In 1959, all areas not inhabited by men, were declared a National Park, about 97% percent of the whole islands. In 1978 Unesco designated the Galápagos as the first World Heritage site and the Galápagos Marine Reserve received the same status. It is only second in size to the Great Barrier Reef in Australia.

Our bilingual naturalist on the ship, Fredy Vargas, a third generation native of Santa Cruz and possessing over 25 years’ experience and savvy as a guide had warned us, tongue in cheek, during one of his first daily briefings: People…this is notanother regular tour -This is Eco Tourism, you are going to learn about Conservation!- Early Human activity on the islands was extremely damaging for the wildlife, as pirates and buccaneers took giant tortoises on board for food. 24% of plant species and 50% of vertebrae species are still considered endangered, due to human activity in earlier times. Clandestine fishing of black coral, lobster, shark fin, sea cucumber, and sea horse is incredibly destructive to the marine life. 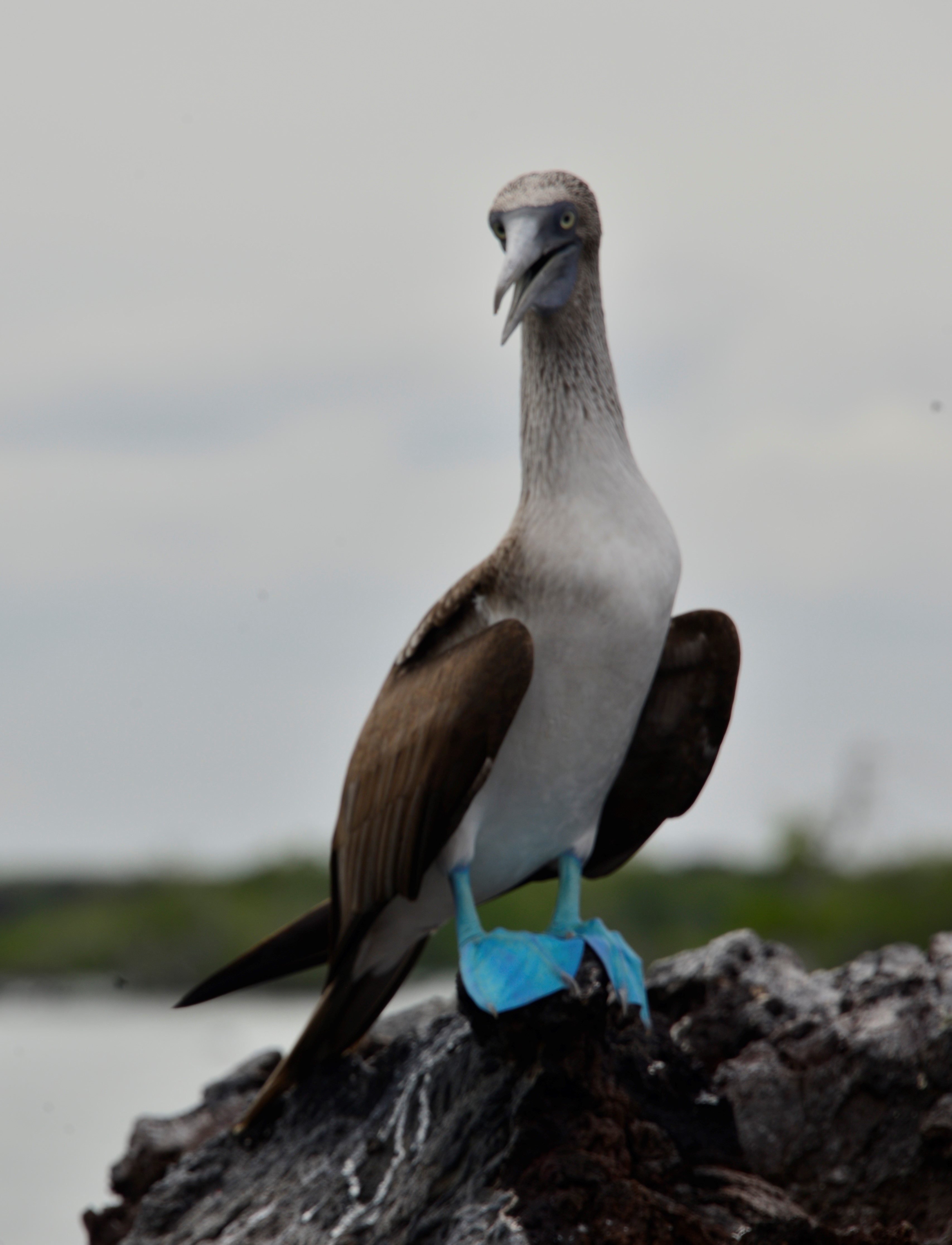 Population growth caused by tourism puts a strain on the unique and fragile environment. Fortunately, environmental education efforts on the islands help their inhabitants understand the larger picture and need for conservation, and responsible tourism and enforced park guidelines help preserve the Galápagos
for future generations. The archipelago and its surrounding waters, located where 3 oceanic currents converge are famed for the unique marine species that piqued the interest of Charles Darwin in 1835. As he observed the fauna of the archipelago, Darwin realized that the species were not unchangeable but they were the witnesses to the irreversible process of evolution. Natural selection, adaptation to the environment and genetic mutation become the basis of his celebrated theory of ‘The origin of the Species’.

The actively volcanic islands are home to fascinating creatures, found nowhere else on earth and during our 500
Nautical miles (900 miles) cruise around 7 of the islands, we experienced the lack of fear that these animals typically regard humans with. Up close encounter are the norm here. When walking on the black rocks, you had to concentrate not to step on the marine iguanas sprawling in the sun. Concentrations of up to 4500 individuals per mile are not uncommon in certain areas. The marine iguana is an extraordinary animal that lives on land but feeds in the sea, on a variety of seaweed. They cannot withstand the cold temperatures for too long, this is the reason
why they must pull up on land to warm up. Giant tortoises, bear the Spanish name Galápagos, an old Castellan word meaning saddle. They can weigh up to 550 pounds and average over 100 years of age. They are the largest species
of the 11 types living in the islands. It is estimated that up to 25,000, from an original population exceeding 100,000 remain today. Stephen Spielberg must have used them for inspiration when he made the movie ET, for their heads share a striking resemblance. 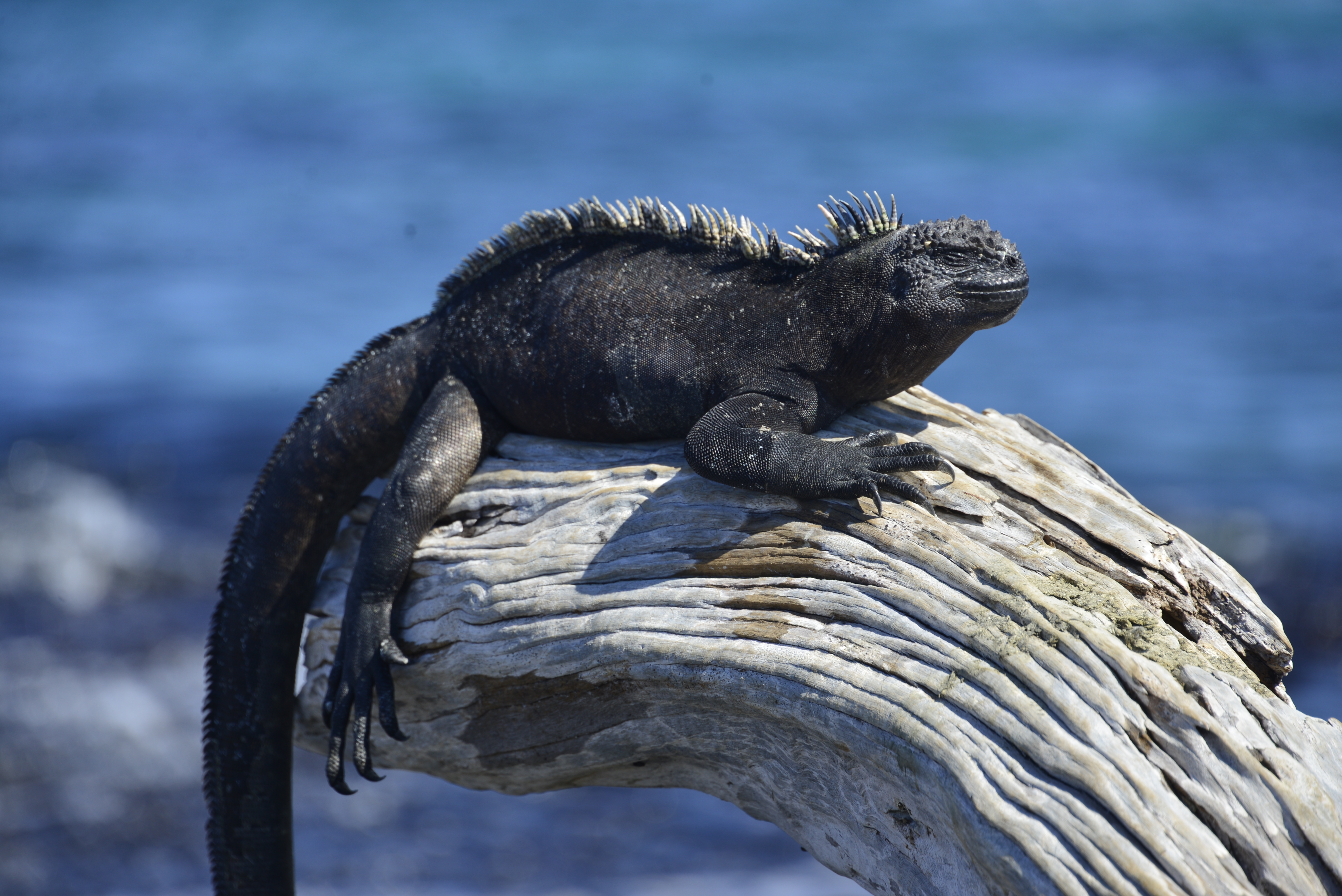 Our first day’s activities consisted of an early rise and a dinghy ride through inlets of red mangroves. Blue footed boobies and flightless cormorants shared a fishing spot on the rocks, oblivious of our camera lenses, as would models on a Paris fashion runway. As the sun started to rise over the lagoon, brown pelicans wowed us with their diving and catching abilities. Marine turtles, fur seals, spotted eagle rays and golden manta rays glided gracefully in the serene water and when Andres, the crew member stopped the engine and started paddling, we could have reached and embraced them. A couple of penguins swam by frenetically, their usual swimming style.

It was early June, the water was about the same temperature as the air, a balmy 24° Celsius (75° Fahrenheit). The Pacific sea salt sticking on our skin and those close encounters with wildlife were definitely good for the soul. A breakfast buffet was awaiting us onboard, the day will be action-packed and memorable.

On the next few days, this mesmerizing routine continued. We went snorkeling every day, sometimes twice in the same day. One morning, our dinghy landed on a black sand beach, reminiscent of a beach in Hawaii, but the sand was finer and the water, a deep cobalt blue. It appeared we were setting foot on a different planet. We snorkeled in a cove framed by the immensity of the sky above. Marine iguanas, sea turtles and fur seals were frolicking nonchalantly in the currants. Yellow surgeon, blue chin parrot fishes, and schools of Galápagos grunts and gold snappers filled our diving masks with a rainbow of colors, while a ‘tintorera’ (whitetip reef shark) was resting undisturbed under a coral ledge. 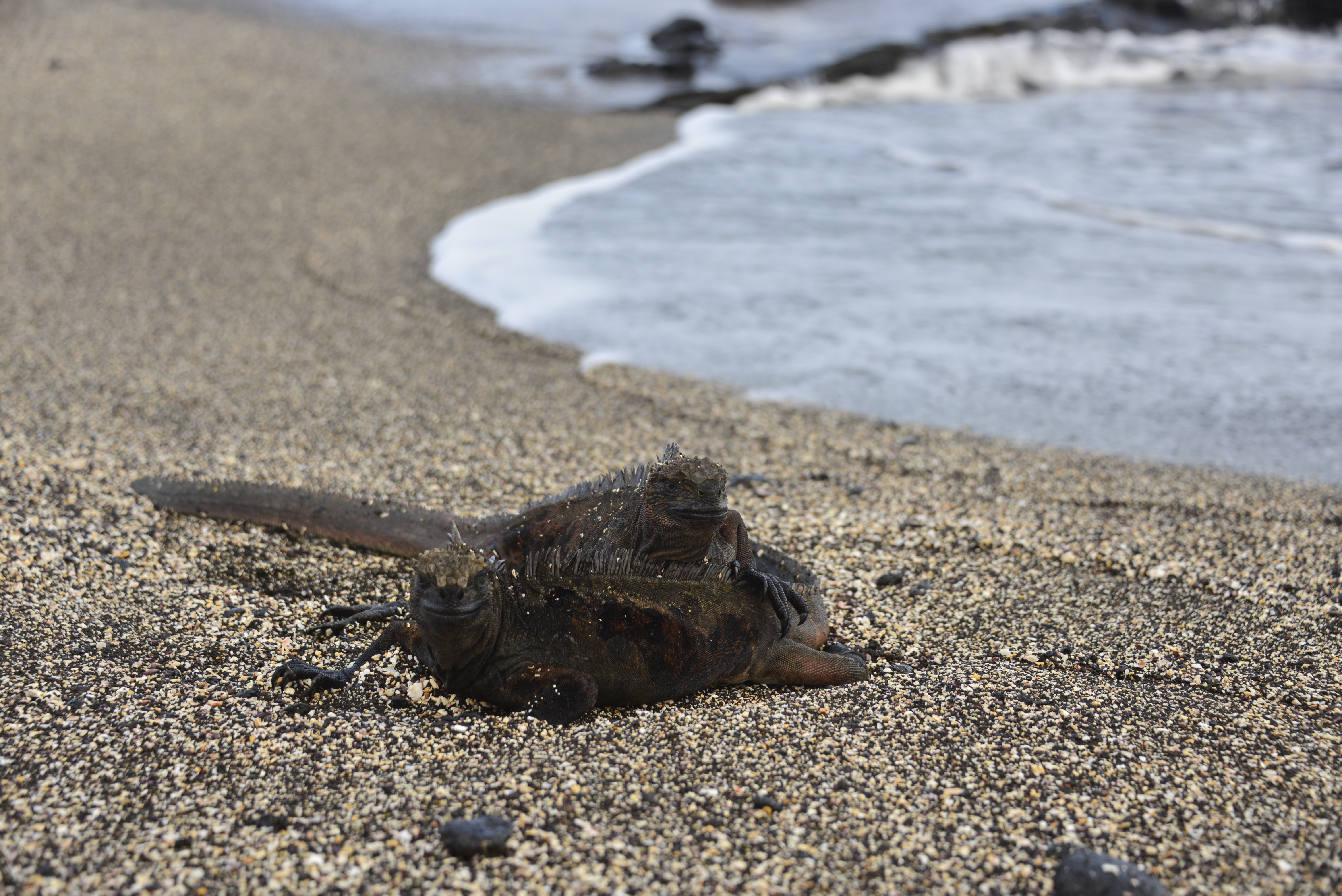 The next morning, we ventured on a red sand beach, redder than the mane of an Arabian horse with the silhouettes of giant Opuntia cacti keeping guard from above the cliffs.

The following day, we landed on Urbina Bay and soon found ourselves neck to neck with several giant tortoises and a couple of land iguanas that we followed closely around a narrow path. They belonged in the pages of a textbook about prehistoric times. The beach was the shape of a first quarter moon. The sand crystals glared in the sunlight like the streaks of Psamathe’s strawberry blonde hair, waving in the ocean breeze. She was after all, the goddess of the sand and intent on showing off. Jaime Veliz, the man who worked his way from ‘marinero’ (the crew member who maneuvers the dinghy) to captain in the space of a young career, must have known we were venturing knees deep
into Greek mythology because he was smiling maliciously, upon our return to the ship.

The sailing was done for the most part at night and we would wake up in the morning, to find the ship resting magically in a secluded bay. There she stood, in close proximity to another island or in a sheltered location way further North on the same island, as it was the case for Isabella which is the biggest island in the Galápagos. However, the scenery and the mood looked vastly different from the day before, like if we had traveled through time and space. 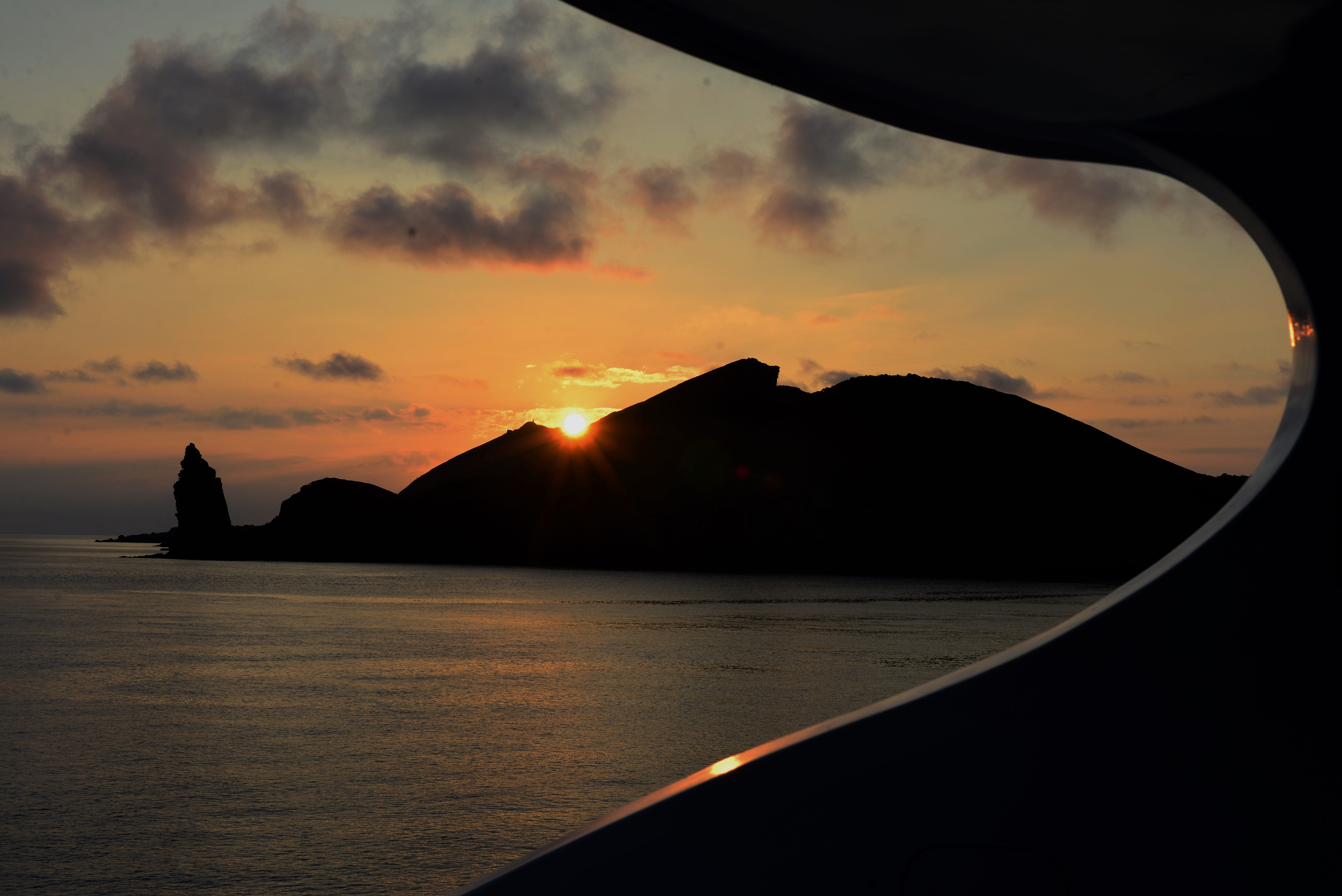 The furthest point west of the whole archipelago is Punto Vicente Roca, on the island of Isabella that has the exact space of a sea horse. We could not disembark on the shore, on account of the high cliffs. Different species of birds make their home on the steep rock face, which is prime real estate. From this vantage point, you could glance at the horizon and imagine sailing straight west to the nearest island the Marquesas, some 3500 miles away. Another 5000 miles would have you land in Micronesia.

Of course, Harry Potter would have probably chosen a waved albatross or a harpy eagle, the 2 biggest birds residing in the islands, for transportation. If I dared to speak on behalf of the other passengers as well, had we been given a magic wand and granted one single wish, we would have probably opted to cruise around these enchanted
islands, in perpetuity. 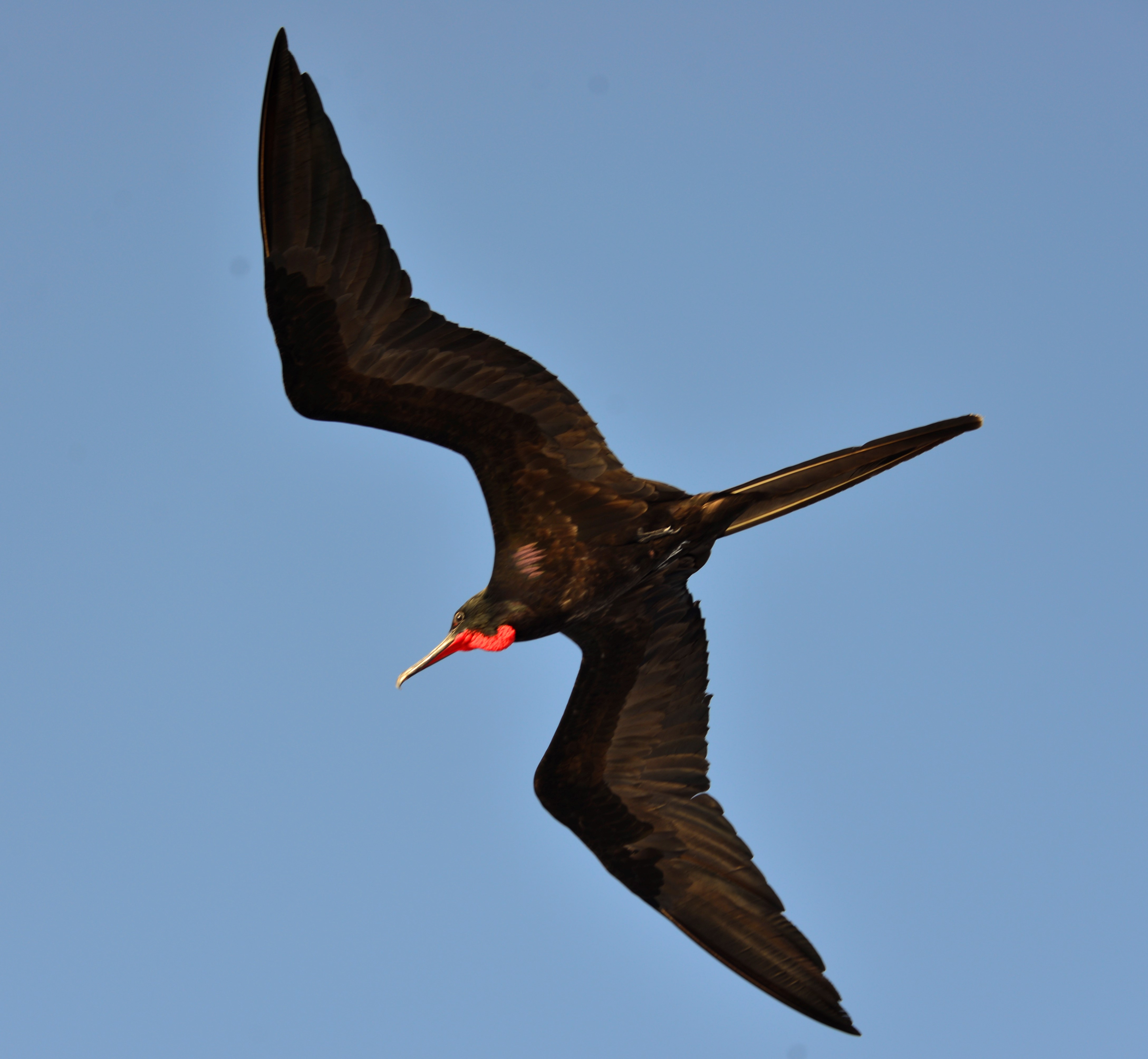 Imagine this harsh sentence: Condemned to a life of conspicuous luxury and mind-boggling discoveries, aboard the Galaxy II Eco Catamaran, in the footsteps of Darwin but in the mold of Robinson Crusoe!
There will be no appeal.