There is no denying that the palazzo-lined canals of Venice are beautiful and they deserve their place as a tourist must-see. But there are other hidden canal gems throughout Europe that provide breathtaking experiences.

They are all beautiful in their own right – but all for different reasons and all to be enjoyed in different ways. You can take your own boat into some; in others you can only enjoy them as a paying passenger on a tourist boat. You can hire a kayak or electric boat to explore some; or, in one case, you can’t go on the water at all – it’s so pristine you can only admire it from the banks.

At a time when tourism overcrowding can spoil your experience in many of the world’s traditional tourist hot spots (including Venice) here are some alternatives to explore.

Private boats are not allowed on the inner city canals but you can soak up the history and architecture on one of the many commercial canal tours that take you on a 30 minute journey through the maze of waterways and their 49 arched bridges.  Get a new perspective on the buildings which reflect the merchant city’s heyday – Gothic cathedrals, churches, halls, stately homes and palaces-turned museums; the towering 122 metre brickwork spire of The Church of Our Lady and the imposing 83 metre belfry tower in the city centre; the rows of colourful step-gabled buildings which look like painted gingerbread houses; parks, gardens and lakes where swans and ducks and lovers lounge casually in the dappled sunlight; and old convents, monasteries, hospitals and alms houses, many now repurposed as public buildings.

Back on land, you an explore the cobbled streets and laneways by foot, hire bike or horse drawn carriage. In the quaint old world shops you will find all of Belgium’s famous exports – waffles, chocolate, lace and tapestries. And, there is no shortage of museums showcasing everything from the art works of Flemish and Belgium painting masters to history, diamonds, chocolate and beer. There is even a museum of French Fries.

Bruges has several monikers including “The Egg”, an affectionate reference to the oval shaped outer canal which circles the city. But it is perhaps its nickname of “Venice of he North” and its reputation as one of the most romantic cities in Europe that make it a new must-see destination. 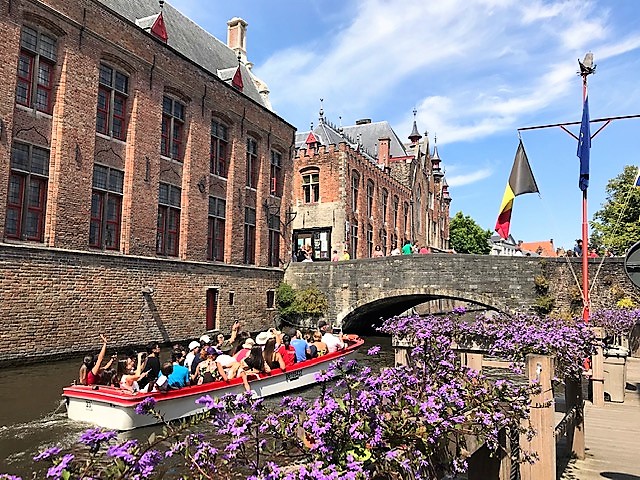 Flower-lined canals and history in Bruges

The canals in Annecy are fed by the adjoining Lake Annecy, a natural lake and one of the largest in France. The canal water is so clean that you can see to the bottom. And the aim is to keep it that way. No boats of any description are allowed on the canals, not even a kayak.  While you can only enjoy the canals from the sidelines you can use a boat on the lake which is fed by melting snow from the nearby Alps. It is the clearest turquoise imaginable. You can hire power or pedal boats to take yourself exploring around the lake or join one of the commercial lunch or dinner cruises, sightseeing trips or sailing boats. Or hire one of the many power boats lined up along the outer canal at the entry to the lake.

But exploring the beautifully restored old town on foot is no hardship. It’s an idyllic mix of colourful houses and shops, churches and parks, all guarded by the castle which towers over it. Strolling along the canals you are surrounded by the essence of Savoie cuisine and French life – tantalising displays of gourmet pastries and fine cheeses, chocolatiers, ice cream shops, wine bars, cafes, restaurants and bistros. The aroma of French food is everywhere.

But it is never more so than on market days when the squares, streets and lanes burst with multicoloured stalls. It is then that you realise why Annecy is not only called the “Venice of the Alps”, but it is known by many as “foodie paradise” and “cheese heaven”. 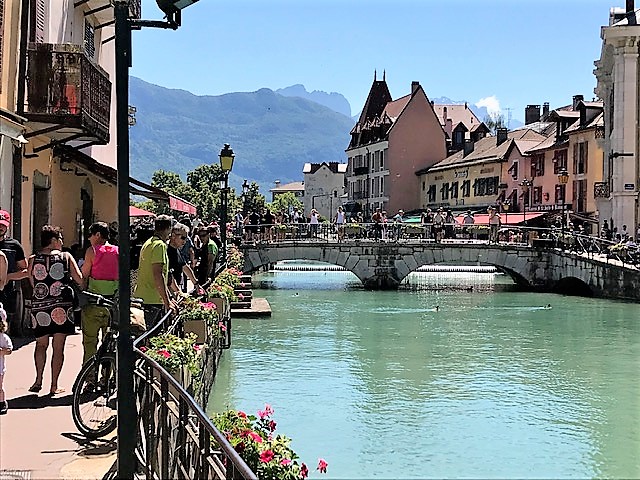 Because the buildings were originally warehouses for goods carried into Utrecht by canal boat, they are only metres from the water. Today, they form part of shady canal promenades lined with massive trees, some more than 200 years old. In some parts, the trees droop right to the water creating magical tunnels of greenery. In autumn it’s a spectacular array of golds, reds and oranges.

Utrecht’s history dates back to the Middle Ages and has one of the richest collections of medieval buildings in the Netherlands. Much of this history is reflected in its maze of wharves, canals and bridges that have become the hallmark of the city.

Explore the waterways on a tourist cruise boat or hire an electric or pedal boat or a canoe and create your own itinerary. The trip will take you through a maze of centuries old bridges, many of them with names denoting the original activities associated with that area of the city. You will see the areas once occupied by the orphanage, the bail house, the blacksmiths and the broom makers. There will also be the longest and the shortest bridge, the oldest, the smallest, the widest and lowest. There will be bridges covered entirely with creeping vines and moss, and others that proudly display their plain unadorned stonework; still others will have ornate embellishments and there will be some that create a perfectly balanced reflection in the water. Each one gives you an enticing peek into Utrecht’s fascinating past.

And if you still aren’t convinced that Utrecht is a viable alternative to Venice, you can even take a ride along the canals in an authentic Venetian gondola. 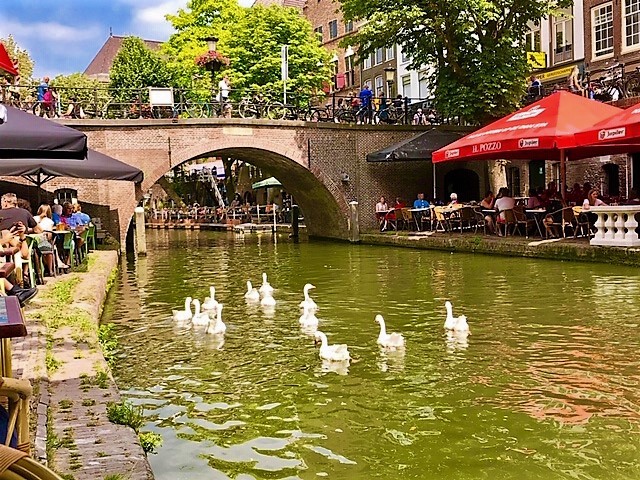 These rural waterways off the Outer Alster Lake take you past some of Hamburg’s most prestigious real estate, at some points so close you can almost touch the gardens, pergolas, lush lawns and ornate private jetties. In other parts of the journey you move silently past bike paths, walking trails, rowing sheds and scattered schrebergarten – the small private gardening plots with colourful huts that seem no bigger than a beach changing shed.

The area exudes peace and tranquillity; dappled yellow light through the tree canopy combined with a relaxing silence punctuated only by the rhythmic swoosh of a rowing oar, the splash and giggle of swimmers, or the quacks and squeaks of ducks and geese floating under the shade of overhanging willows.

It’s a far cry from the hustle and bustle of one of the largest ports in Europe, just a few kilometres away. But if that aspect of canal boating also interests you, there are tours available through Hamburg’s industrial waterways – a city with more canals than Amsterdam and Venice combined and more bridges than any other city in the world. You can explore the shipyards, working locks and container ships and enjoy a water view of the Spiercherstadt, the world’s largest warehouse district where the distinctive red brick buildings line the canals. 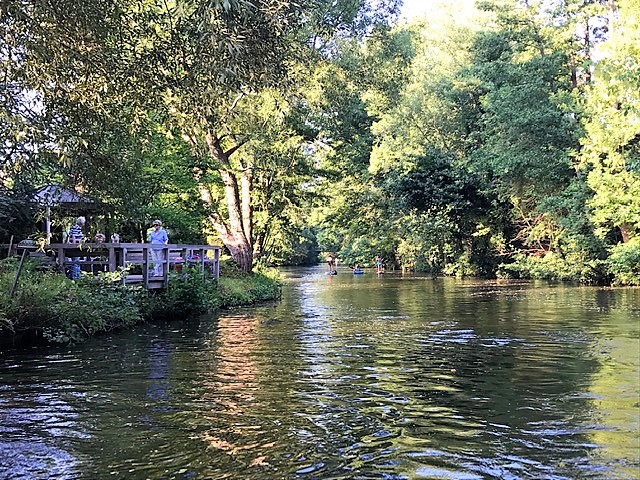 Canal tours through Copenhagen let you appreciate the marvels and contrasts of the city from a different perspective. There are regular large commercial tour boats or you can hire your own solar powered craft for a self-drive expedition.

The network of canals takes you past such must-see places as the royal residences of Amelienborg Palace, the Royal Opera House, Christiansborg Palace which houses the Danish parliament, the supreme court and the Ministry of State, and centuries old churches including Our Saviour’s with its iconic steeple and external spiral staircase.

The boats and brightly coloured shops, houses, bars and restaurants which line the 17th century Nyhavn Canal is synonymous with Copenhagen. Here in the centre of the city’s dining and entertainment zone you can see the old home of one of Denmark’s most loved sons, author Hans Christian Andersen, plus two others where he lived for shorter periods.

From the water you can also avoid the crowds visiting Copenhagen’s famous “Little Mermaid” statue sitting on rocks at the edge of the harbour. Now more than 100 years old the statue was inspired by Andersen’s famous fairy tale.

A big advantage of taking your own private solar boat around the canal network is that you can see some of the more hidden waterways that lead to interesting and intriguing areas of the city. 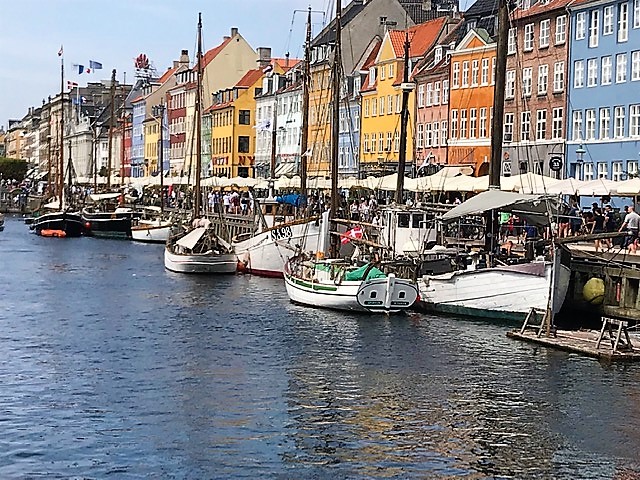 The colours and life on Copenhagen’s Nyhavn Canal

There are also some canal towns which are not as jaw-dropping as these striking examples but they have their own charm and are well worth a visit. One that immediately comes to mind is Sète, in southern France.

Known as the Venice of the Languedoc, the small, unpretentious town of Sète is bordered by the Mediterranean Sea on one front and the vast salt water Thau Lagoon on the other, with a network of canals linking the two. As a busy port, a popular cruise stopover, a seaside town with a strong fishing tradition and its location as the southern point of the beautiful UNESCO heritage-listed Canal du Midi, Sète is always a bustling centre of water-based activities

In the centre of town, a trip along the canals gives you a glimpse of the essence of French life. Colourful boats line the canals which are bordered by massive trees, hanging flower baskets and town squares packed with people, cafes and umbrellas. Once you get away from the town centre, however, the canals aren’t particularly attractive but their main charm is that a guided tour through these waterways is a trip through the city’s history, especially its maritime heritage.