A desert African nation with a distinctly Mediterranean feel on the north coast combines rich history, rugged mountain ranges and an Arabic appearance.
Nine days is hardly enough to see a country thoroughly, but is certainly adequate to leave with a good feel for the people, culture and landscape. I had done my research, well I had read Lonely Planet a lot, and was determined to see as much as I could on £40 a day.

My guidebook suggested that 60-80 dirhams (12 dirhams = £1) was a reasonable price for a taxi from the airport. Armed with years of travel experience, some determination not to be ripped off, but balanced by the elation at the forthcoming adventure and relief at being off an Easyjet flight, I sought a taxi from Marrakesh International.

I was spectacularly duped into thinking 120 was a normal charge to the centre, having negotiated my way down from 150 (the driver laughing at my suggestion of 100 blunting my spirit to argue somewhat). Nine days later and more savvy I paid 60 for the return journey. Unlike say, Australia or America where hostels are of good standard I did not fancy one in Morocco, and when you can get a decent, clean room albeit with shared toilet and bathroom for £10-15, there’s no need. Having travelled in Nepal, India and Thailand, a room of slightly lower standard would cost about £2-6 so Morocco is not as cheap as you might think. I was easily spending £40-45 a day without alcohol.

The sights in Marrakesh have good variety, and there’s a real sense of history in the city, a timeless quality. Sitting atop one of the many balconies overlooking the Medina seeing the smoke from the food stalls and hearing the pipes of the snake charmers, one really felt that not much had changed here for centuries. 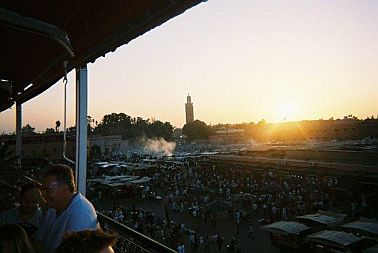 Of the other sights, the Ben Youssef Medersa (a learning college) is a must at the north end of the city and the linked museum of Marrakesh was a surprising bonus. The Saadian Tombs and the Bahia Palace to the south of the Medina also add to the sense of history and past glories and are well worth the visit. The jewel in the crown though for me, was the Cyber Park, a fantastically well kept garden just 20 minutes walk from the Medina on the Blvd Mohamed VI. It’s highlight around 100 back and front prints of spectacular photos from the 7 continents of the world, a perfect way to finish the day.

Speaking of which, my hotel had a great roof terrace overlooking central Marrakesh (not quite lording it over the Medina thanks Lonely Planet) and what better way to end a solid day’s sightseeing with a few beers and a chat on the terrace. When I asked if this was possible, the young man at the desk looked at me as if I was crazy, “What, alone?” he said. “But where will you get the beer from?” It turned there were two, yes only two places in the city where you could buy alcohol, and both a fair way away and most likely shut. So a few cokes it was.

A great way to get up to the mountains is to share the taxi fare and guide costs with some like minded individuals. Fortunately I met Sebastian and Lina from Hamburg, Germany who were also up for this. After some hard bargaining (in French) we got a dentally challenged driver down to 400 dirhams for the day and going wherever we wanted. Not a bad deal, we thought, given that we had been quoted 200, just for one way transport by our hotel. Therefore it was to our surprise that our man left us at Semi Fatma at the start of the climb and would meet us later, the cheeky so and so. He came back on time at 5pm with a car full, beaming that no other taxis had come all the way out (about 2 hours from Marrakesh) so he’d been flat out all day and made a packet. Sporadically toothed yes, stupid, no. Moroccans such as our man were frequently friendly and approachable but certainly no mugs.

I’d also mention that the atmosphere in Marrakesh became a bit more aggressive later into the night, in line with the locals driving. The only vaguely bad thing that happened to me was an exchange of pleasantries with a local who kept pulling my arm, so no real harm done. As a guy by himself I was a pretty easy target for locals out to make a quick buck, they were often friendly at first but when (for the fourth time) I pointed out I had no interest in buying weed or a “crazy night in the mountains” they lost interest.

Onto Fez on the excellent train service which was comfortable, clean (ish) and reasonably priced. Orientation of the old town of Fez is completely impossible. Several times I was following what I thought was the main route, and a minute later I was completely lost and out another five dirhams, to be shown the way back. It was absolutely fascinating though. The range of smells and spices in the souks truly tantalising. I saw everything for sale from shin pads to extension leads, and from herbal remedies to the swankiest leather jacket. 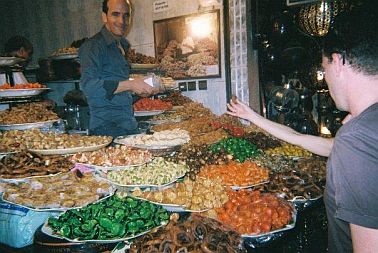 Watching the sunset atop the balcony of the hotel just off the main boulevard was a real treat, as was the generally more laid back atmosphere to Marrakesh. There were a couple of bars but they were dingy, dimly lit, and populated by men by themselves or in rowdy, unfriendly groups. The cafes (of which the only difference seemed to be colour of chairs) were a much better option.

Ironically I was ill after eating at the only vaguely posh restaurant in town (don’t have the salade nicoise at the Isla Blanca), which put pay to half a day on Thursday morning, meaning I spent only half a day in Meknes. I nearly didn’t make it out of my room at all (living the dream) but manned up and made it. It was well worth a day trip. Some great sights and a much more authentic, cheaper and traditional feel to it. There were animal heads on display in the souk butchers making me think Fes and Marrakesh were watered down somewhat for tourists. I saw another great sunset from one of the medina café terraces.

Day 7 was a very long day. Seven hours Fez-Marrakesh on the train again went without a hitch followed by four hours on the bus. Supratours, the bus company, runs alongside the train timetable so that linked up very nicely. Aside from spitting a lot Moroccans are also friendly towards one another (except when driving) and there seems virtually no tension between the sexes. A conversation started in the carriage I was in, about what I had no idea, but it involved all the other passengers who were a smartly dressed businessman, two younger but equally smart men, a formidable, pleasantly scented lady of about 40 and a girl wearing the traditional headscarf, who was about twenty. My point is that it’s very hard to imagine a similar scenario occurring on the 13:42 Surbiton to Waterloo, or indeed anywhere in England. 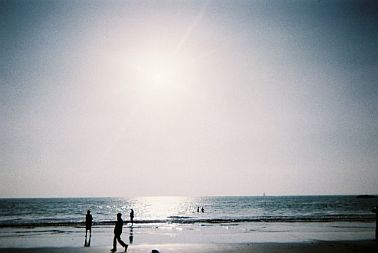 Agadir was all but destroyed in an earthquake in 1960, but is now thriving as a midrange tourist resort, popular with couples and middle aged holidaymakers. It’s not somewhere I would usually go but perfect for some well earned R and R and outside beers at sunset. The crescent beach is lovely and the beachfront bars and restaurants gave it the feel of a more upmarket Spanish or Portuguese resort.

And that was pretty much that, just a quick note on Atlas Blue, the Moroccan low cost airline I flew back to Gatwick with on Monday at 7.30am. £35, on time, a meal, little turbulence, seat allocation, a near perfect landing compared to Easyjet on the way out which was £168, no seat reserved, two hours late, no meal, and an irritating pilot’s “jokes” to put up with. Take notes.

Flights: From the UK £35 one way with Atlas Blue www.royalairmaroc.com From the US $800-$1000 www.airfrance.com www.klm.com

Accommodation: Hotel Central Palace, Marrakesh. hotelcentralpalace@hotmail.com. Located just off the main medina was very clean, the staff were friendly, internet also available, not the quietest though.

Hotel Royal, Fez (00 212) 035 624 656. En suite rooms were large with high ceilings and generally clean, the location away from the chaos of the medina was much appreciated. Book ahead if arriving late.

Taxi: ALWAYS get on metered petit taxi. This will save you £2-3 a time.

Photos: Generally always fine, if at all unsure, especially in religious areas best not to as I did witness some over keen photography that was not appreciated in mosques. Use common sense.

Time to go: Summer months are very hot and to be avoided, October-November and February – April are the best times.