The Simien Mountains National Park was for me the highlight of the trip. Gondar can be used as a gateway to visit the park but is considerably further away than the much smaller town of Debark where we were based.

Debark is however less developed from a traveller perspective with only a handful of hotels and restaurants, but nonetheless served as a satisfactory base. There is little to see in the town itself but during a quick walk up the main streets we were met with the usual warm welcomes. I also noticed a sign on the way from Gondar urging the termination of people trafficking.

The day we spent hiking around the park was one of the best days I have had travelling. The park is home to a variety of animals, birds and wildlife. The highlight was undoubtedly the chileda baboons who are tame enough that they will allow tourists to stand among them and take photographs, almost at will – although they will move away from you if they feel in any way threatened. It was an absolutely wonderful experience. 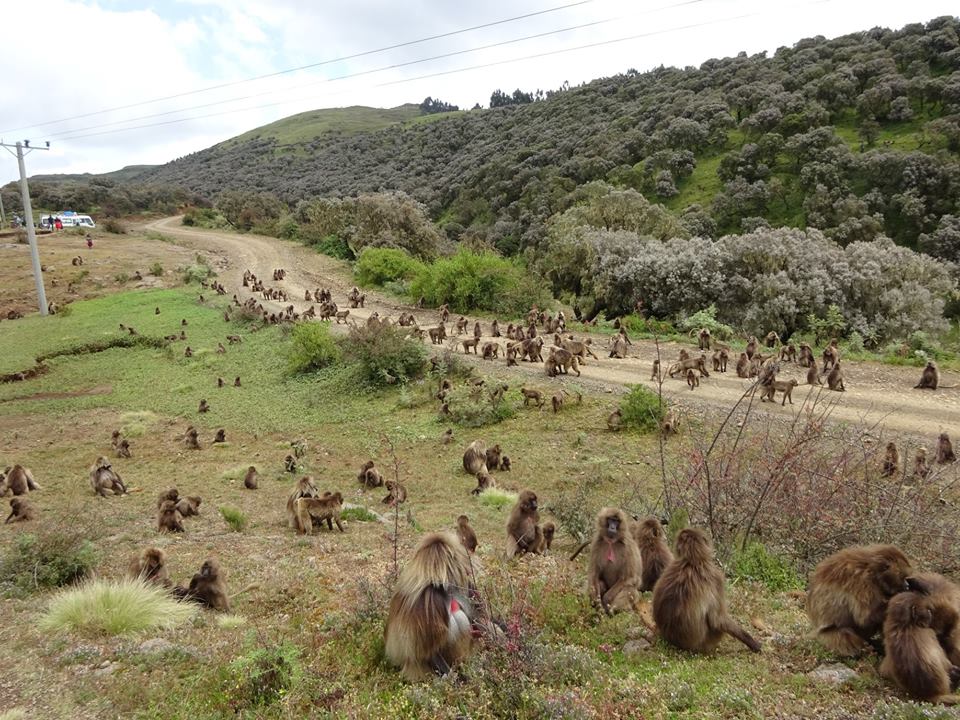 We also saw buckbeast as below, as well as thick billed ravens (also below) vultures, eagles, walia ibex, and oryx. The park is also home to leopards, however we were informed they (perhaps wisely) stay well away from mankind. 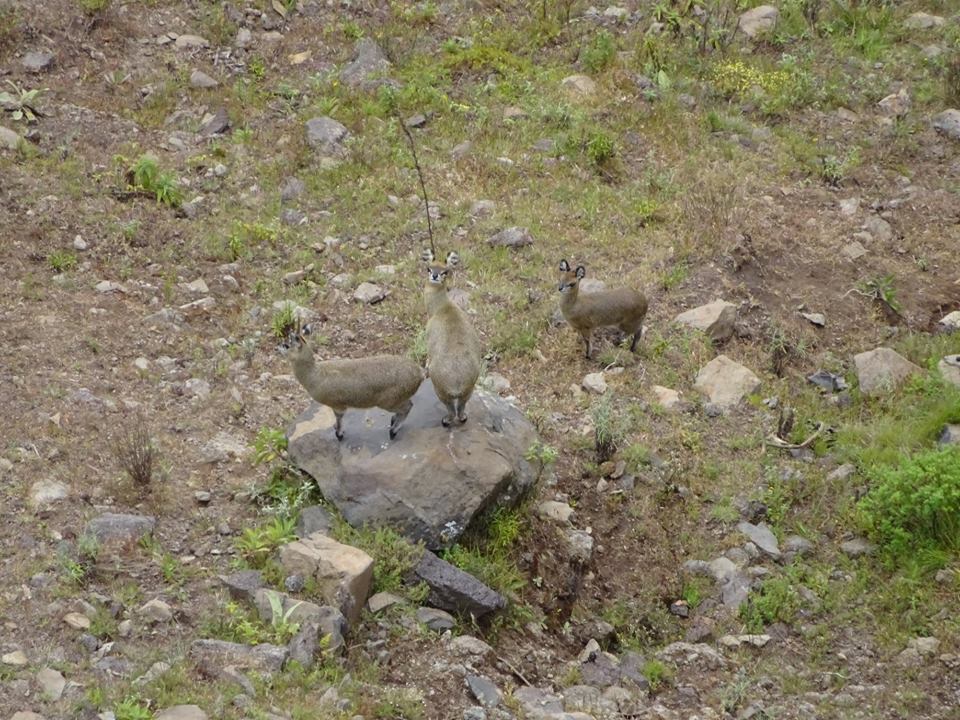 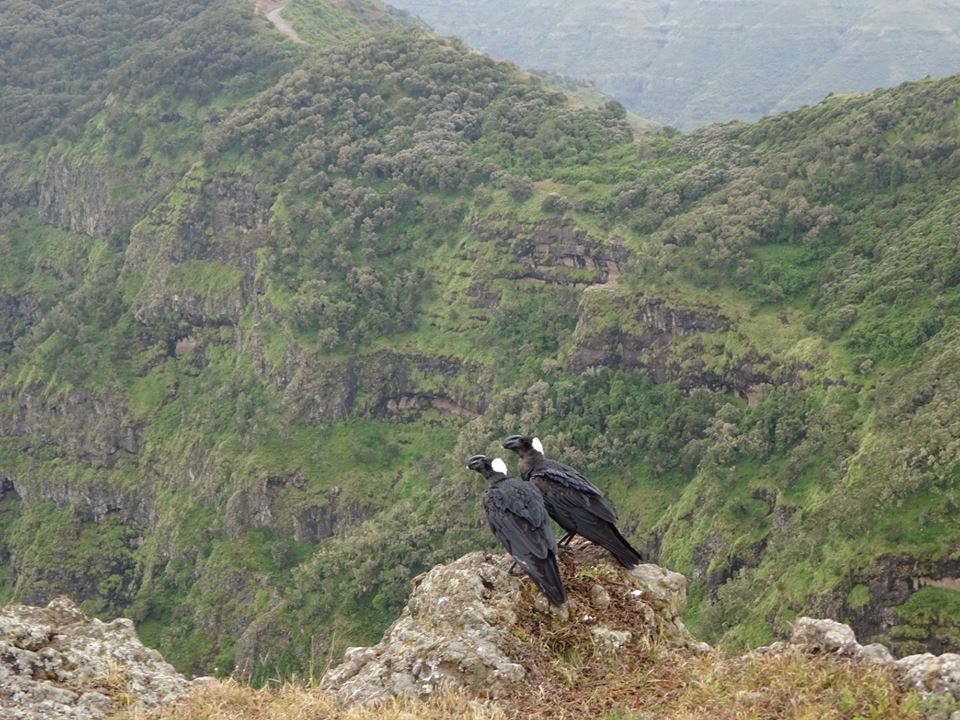 The afternoon saw us trek through the park a little deeper to reach a waterfall as below. The air was clean and crisp and the relatively untouched natural beauty of the park was a real pleasure to be in. 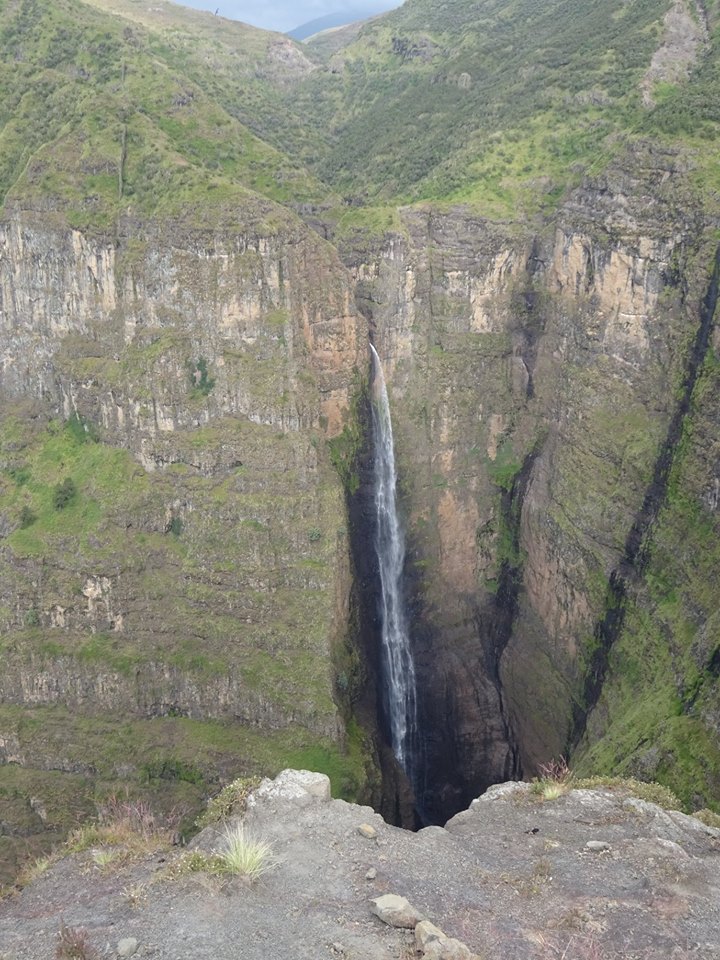 Unfortunately the day was not quite clear enough for what would no doubt have been some fantastic sunset photos down the valley from our campsite. We faired better with the sunrise the next morning which made the somewhat chilly camping conditions and 5 am alarm call more than worthwhile. 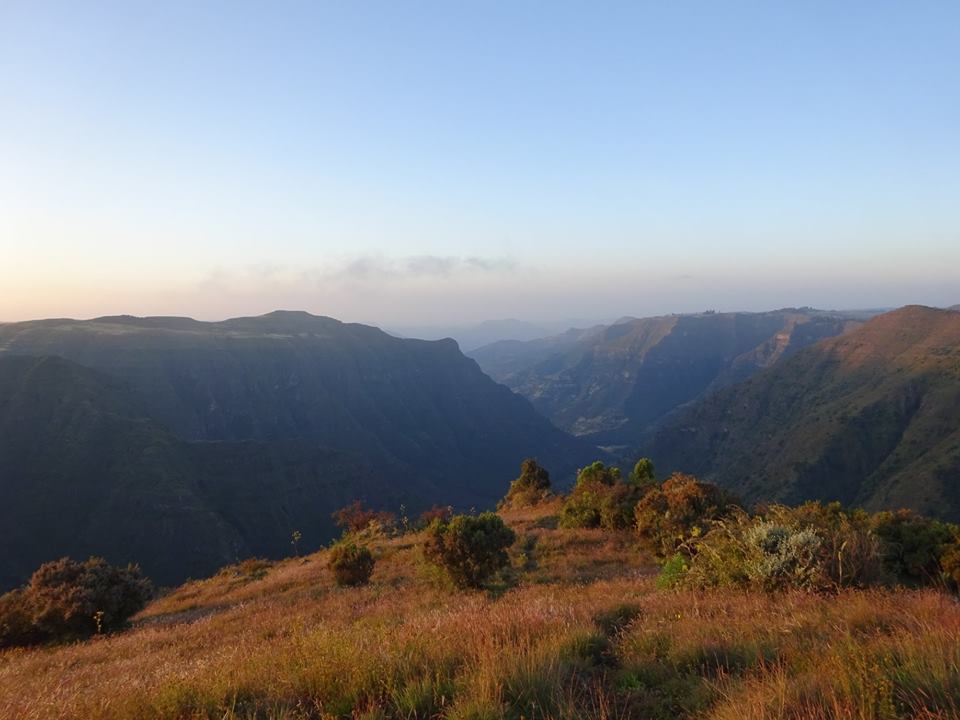 As someone who has always lived in towns and cities I loved this part of the trip. It was a real privilege to be in and amongst such stunning natural beauty and the animals and birds that it is home to.

At this point it would be remiss of me not to mention our (armed) guards who stayed up the whole night in less than warm conditions to keep an eye on things.

The following day was a long one on the coach as we made our way to Axum in the far north of the country, towards the border with Eritrea. The day started back in Debark as we dropped off the camping support staff. I spoke to a young lad outside a cafe selling chewing gum, tissues and other goods who wanted to study to be a guide. He was clearly keen to practise his English which was already more than passable. This was not to be my last encounter of this kind. Giving him a pen and buying some chewing gum seemed a little inadequate as I wished him well before we returned to the bus.

As we neared the Eritrean border we passed through refugee camps for those fleeing the difficult political situation that sadly continues in that country. Currently there are more than 175 000 Eritrean refugees in Ethiopia who have no wish to return to their homeland. The camp is funded by the UNHCR (UN Refugee Agency) who provide basic provisions as well as housing. The Norweigan Refugee Council also seemed particularly prevalent in the area.

Axum has modernised in the past ten years and the new part of the town is home to several international class hotels and a healthy smattering of good restaurants. It is a burgeoning university town with a population of more than 50000. I particularly noticed the number of very smoothly dressed young people enjoying their nights out on both the Sunday and Monday that we were there.

Axum has several main tourist sights. The first we visited was the Northern Stelae Field, one of several in the city. The Stelae here date from the 3rd and 4th centuries. Stelae are monoliths, essentially giant tombstones that were erected to announce the passing of notable person. Below the monoliths are sizeable tombs where the person was buried (frequently along with their servants who were still alive at the time). Due to their excellent state of preservation Axum is the pre-eminent place in Africa to view this phenomenon. The tombs below the Stelae are not well lit so a torch is needed to fully explore these, which adds to their authenticity and for want of a better word creepy feel to them. A more watered down tourist site may well have had these generously lit with more signage but this would have detracted from the overall effect. 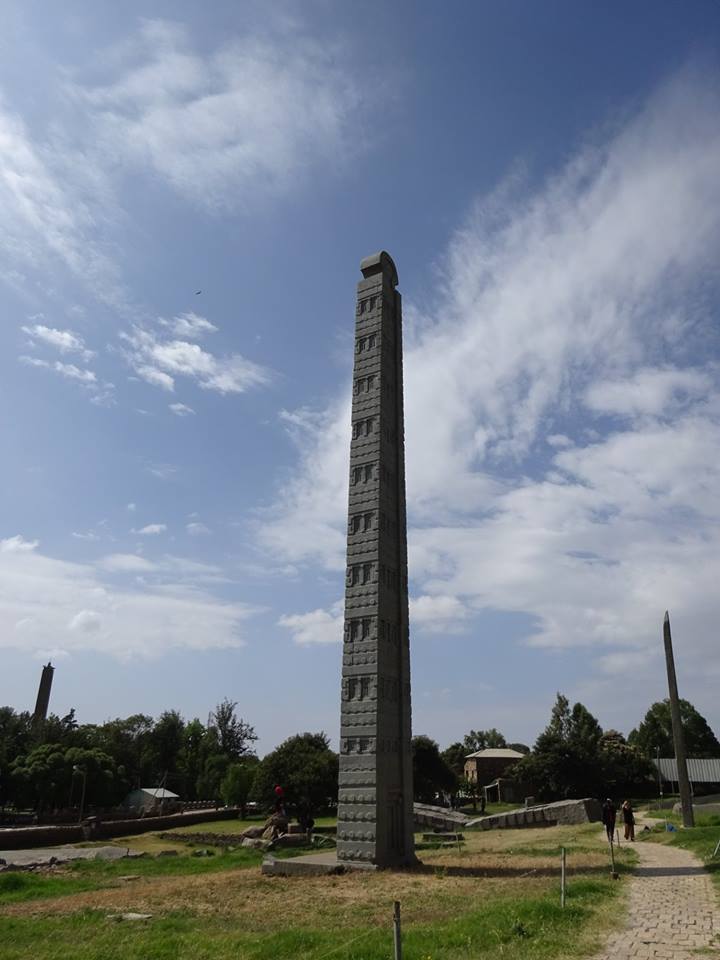 We visited the St Mary of Zion Churches in the afternoon. The first was the very modern New Church of St Mary of Zion, commissioned by the Emperor Haile Selassie so women had a place to worship in the town. It is a vast dome structure adorned with typically colourful paintings and murals depicting biblical stories. While impressive architecturally I personally found this church’s interior slightly distasteful as for me the colours were too bold and  came across as overtly decorative rather than simply telling the stories they were supposed to be portraying.  The adjacent men only Old Church of St Mary of Zion is much more traditional and humble in appearance and decor.

Situated between these churches is the Ark of the Covenant Chapel (below) where the Ark of Covenant is housed; although this fact is much disputed.  Entry is not permitted – indeed only one person has access to it and even he is not allowed to look at it. 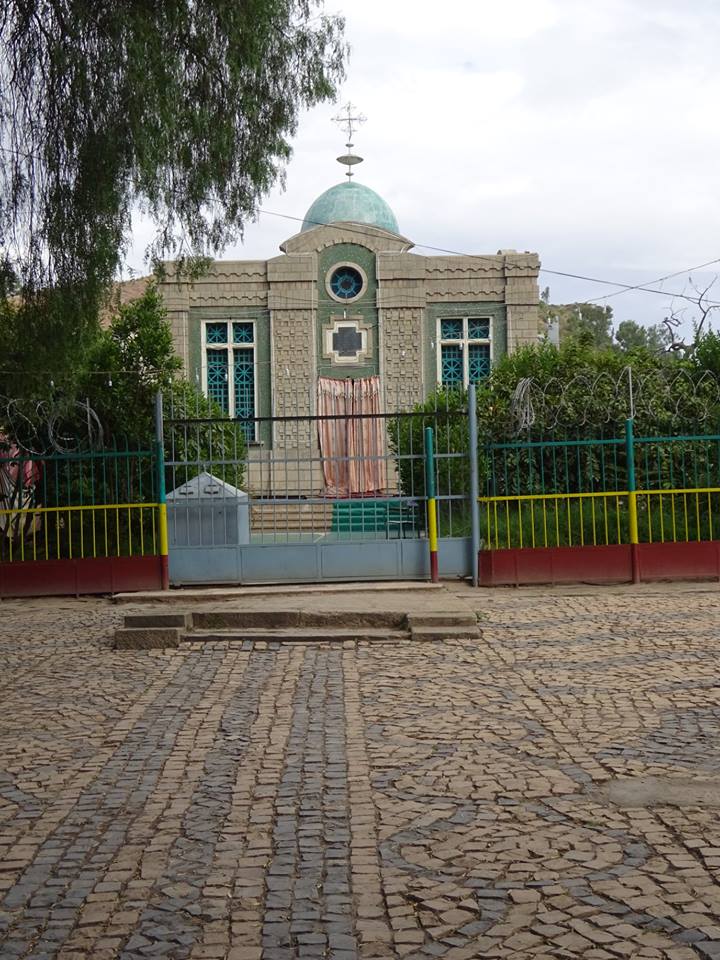 The final stop of the day, just outside the main town was the Palace of the Queen of Sheba (below). The fifty room complex is impressive and well preserved however this sight would certainly benefit from some signage and further information. There is conjecture among archaeologists as to whether more of the palace lies further underground. 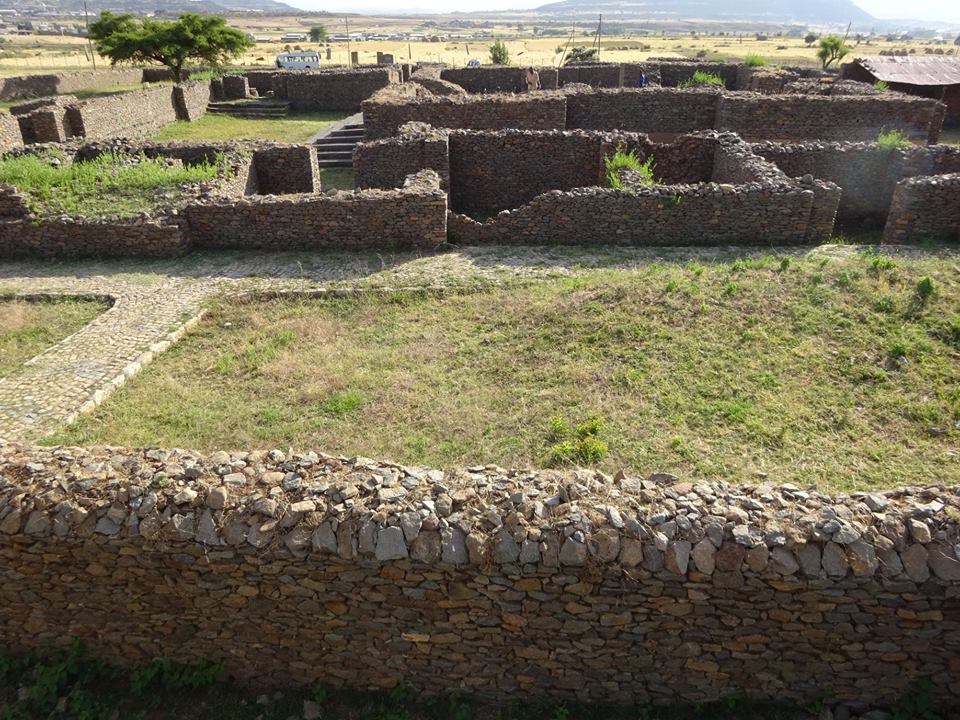 Axum as a tourist destination in its own right ticked all the boxes – a healthy amount of hotels and restaurants and a good number of interesting and varied sights within a small, easily navigable radius. It was my favourite town that we visited, although when I took a short walk away from the centre it again became evident that even in a relatively affluent town on the surface, that its people still face stiff economic challenges.