Dubrovnik: Back on the road in Croatia

“You’re about the 8th person today whose told me they’re going to Croatia,” I was told by my barber a week or so before departure. I considered that either I had made a superb decision as so many people were going there that it must be a brilliant place; or conversely it would be full of Brits abroad. My experience was nothing but a positive one.

The weather looked outstanding – and so it proved as I scarcely saw a cloud in 5 days and the temperatures for my early September trip were in the high 20s to low 30s with a slight sea breeze.

That said, in terms of local hospitality it was a relatively inauspicious start with the proprietor of a local bakery barely looking at my booking.com reservation before telling me she didn’t know where it was. “That’s not how it works round here, ” I thought. But I can say that was the last experience of this kind that I had. Croatians were warm, friendly and fantastic hosts.

Starved of this kind of heat for the last eighteen months or so, I headed straight to the beach. Banje beach is the main beach in Dubrovnik and gets very busy. It is attached to a bar, restaurant and beach club and becomes a nightclub in the evenings. It boasts a generous array of sunbeds that can be hired for around £10 for the day. Not sure I would go as far a glitzy and glamorous (Lonely Planet) but it was relaxed and had a pleasant and chilled out vibe. 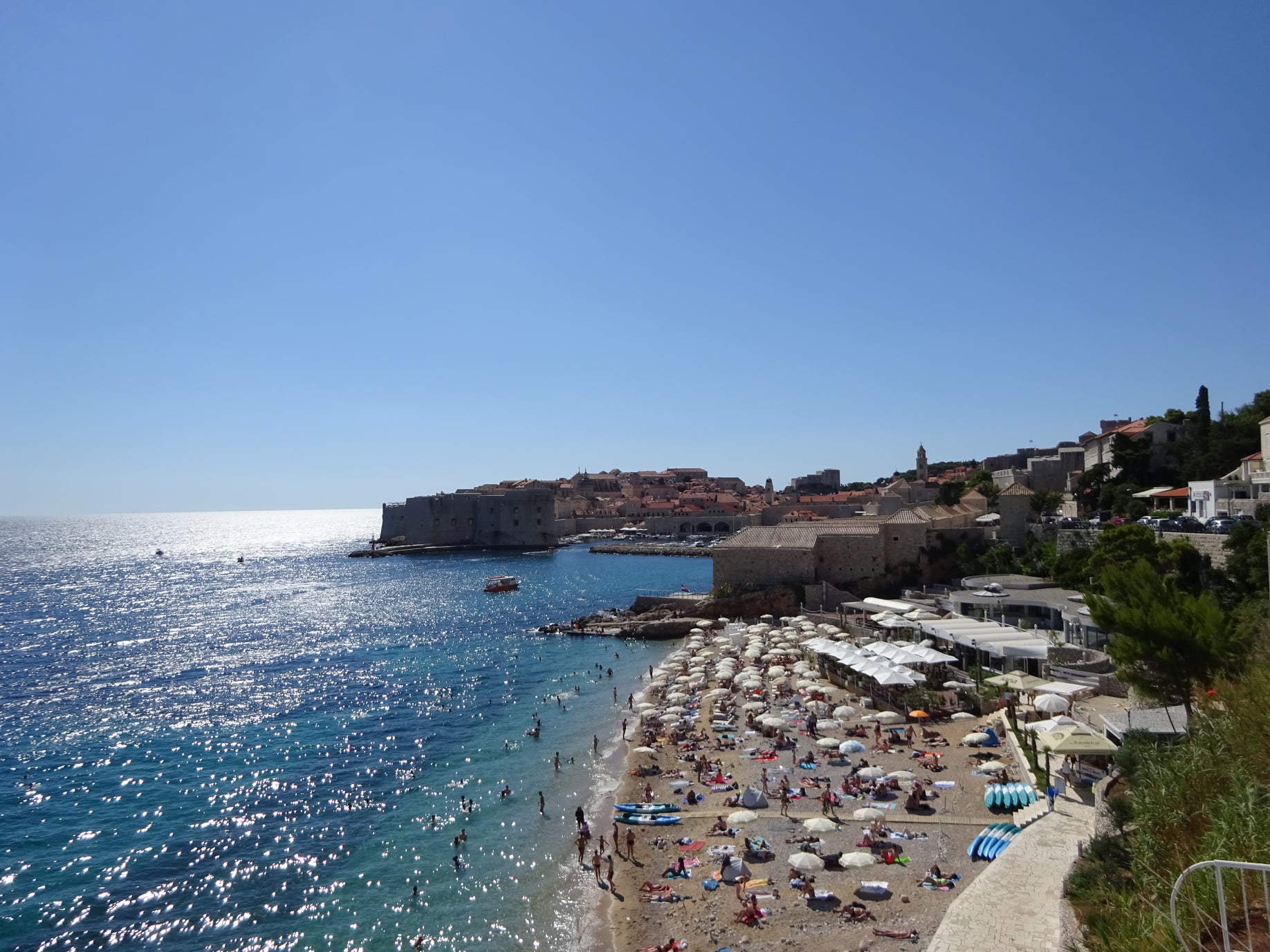 I stayed, more by luck than design it has to be said, in the New Harbour Area. I would recommend this as it felt a little more authentic that Dubrovnik’s old city which is very tourist focussed and whose eating and accommodation options are considerably more pricey. The New Harbour Area boasts several more reasonably priced but no less excellent restaurants (the service and food was exceptional wherever I went) and a couple of decent bars. It is a short bus trip to the old city.

Dubrovnik’s Old City, crowds of tourists aside, is something of a sightseers mecca given the abundance of good quality museums, galleries, churches and monasteries within a compact and accessible area. I would just about recommend the Dubrovnik pass only if you want to visit the Rector’s Palace (a must) and the fantastic Modern Art Museum.

The War Photo Museum was my first stop. One level focusses on the Serbo-Croat War (1991-1995), and at time of visiting there was an additional exhibition dedicated to the Rohingy Muslim plight in Myanmar. This outstanding museum also features photos from many other War Torn countries around the world, including Palestine, Libya, Afghanistan, Iraq, Uganda, Central African Republic, and Sierra Leone. The general impression I left with is that the Serbs were the aggressors and the Croats (like the Bosnians or the Kosovans in subsequent conflicts that continued until 2001) didn’t initiate the fighting. That said, the manager, a New Zealander, interestingly commented, “but they (the Croats) turned it to their advantage.” I’ll leave you to make up your own minds.

The tour of the City Walls is Dubrovnik’s number one attraction, however be warned it was £24 at time of visit which for me seemed excessive for a tour that took just an hour, so I unfortunately had to pass. Instead I would absolutely recommend a walk just out of the old town to the Museum of Modern Art. This generously curated and spacious museum focusses on the work of leading contemporary Croatian artists and features some particularly interesting pieces that seek to highlight the softer side of perceptibly strong and aggressive in appearance, men. Mental Health is also explored in several of the paintings. The works showcase an interesting contrast of the old world clashing with modern life and culture.

There are numerous churches of different architectural styles and denominations to check out. The pick for me were the Cathedral of the Assumption, St Ignatius of Loyola Church and the Serb-Orthodox Church of the Annunciation that are all well worth a visit. 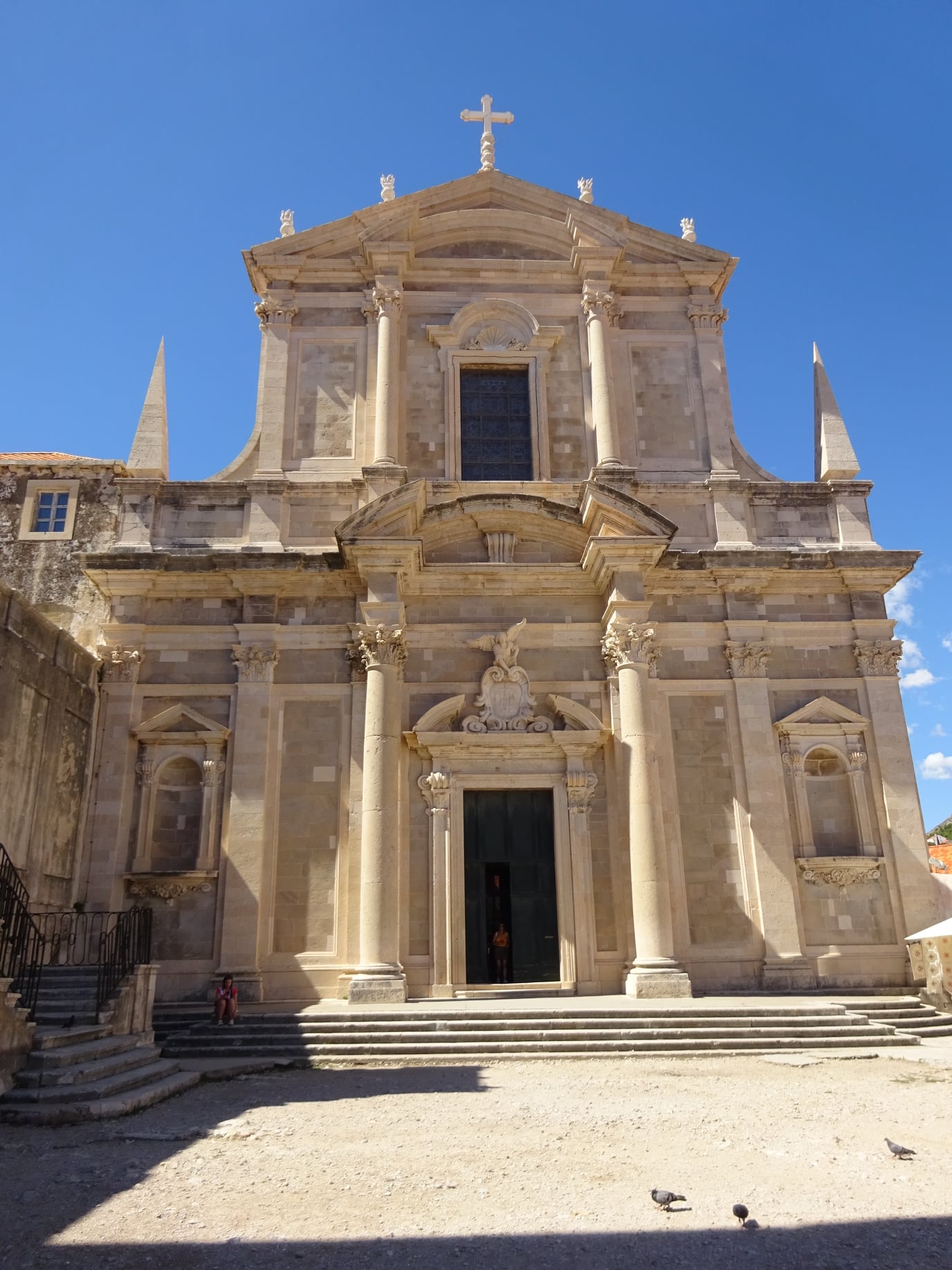 Day 3 and first stop was the excellent Rector’s Palace Museum. If there are two must do museums out of the plethora to choose from this is certainly one, along with the War Photo Museum. It is also the only museum that you can buy a separate ticket to visit without the Museum Pass. The Rector’s Palace is just about worth the 100 Kuna (about £12) entry fee and is very well curated and the collection of paintings, sculptures, artefacts and furniture is impressive. It provides a sound history of the city as well. The somewhat hidden away section that houses photos of Dubrovnik taken during the war years of 1991-2 was probably the highlight.

The Cable Car leads to great panoramics of the Old City and the Adriatic Coast as you would expect. I would suggest veering off to the left from the main viewpoint for better views. There is a museum at the top dedicated to the War in Yugoslavia. I would absolutely recommend walking back down to get some better shots and stretch your legs a bit. It takes about an hour to get back to town via this method. 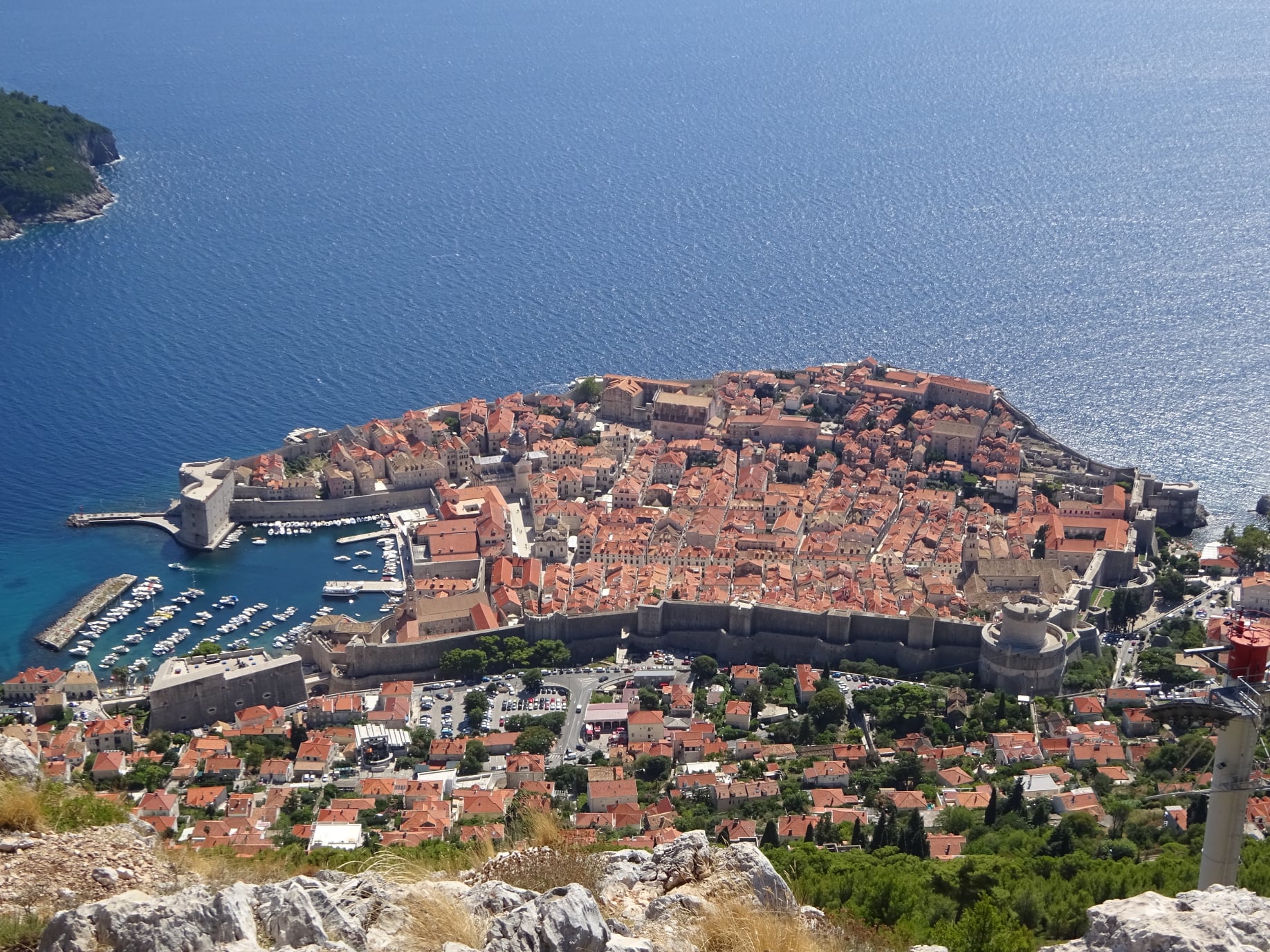 Keen to get away from the tourist hotbed that is the old town I took a 45 minute ferry out to traffic free, idllyic, Lopud Island the next day.  The ferry also acts as something of a cargo vessel, transporting everything from fruit to Coca Cola and all manner of household supplies.

Spending a day and night here is recommended as that would allow more exploration of the Island itself – I was told there is some decent hiking to be had. It is the kind of tranquil, romantic place that one would probably go for a few days R&R on honeymoon. The main drag offers numerous reasonably priced restaurants for a bayside lunch and the vibe is serene, friendly, and peaceful.

In terms of sights, the Franciscan Monastery on the left hand side as you get off the boat is worth a quick visit and there are several decent churches. The pick though would be taking a stroll around the well kept botanical gardens. 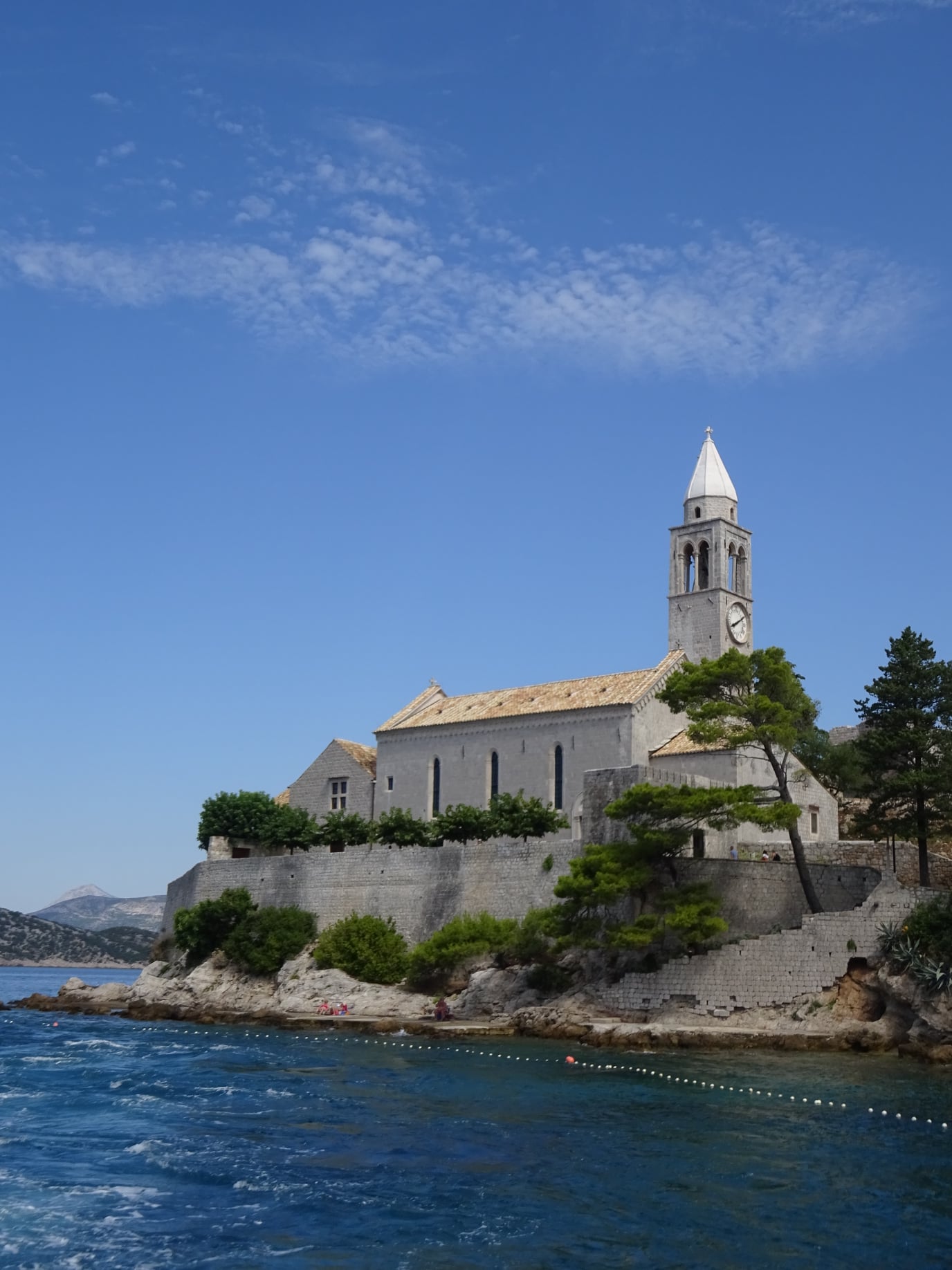 Most people head straight across the island to paradisial Sunj Beach. I would suggest the short walk then golf cart option rather than the long walk – it’s further than some guidebooks may have you believe. The beach is set amongst green tree covered hillsides, and the water is warm and clear and there are plenty of options for sunbeds, food and drinks. With music on as well it’s really a fantastic place to take a book and spend however long you wish.

Back to the old town in the evening I found a spot at Buza bar which takes some finding but gets busy particularly around sunset. Another option for the sunset is a Kayak Tour which will take you around the walls and provides a better view. 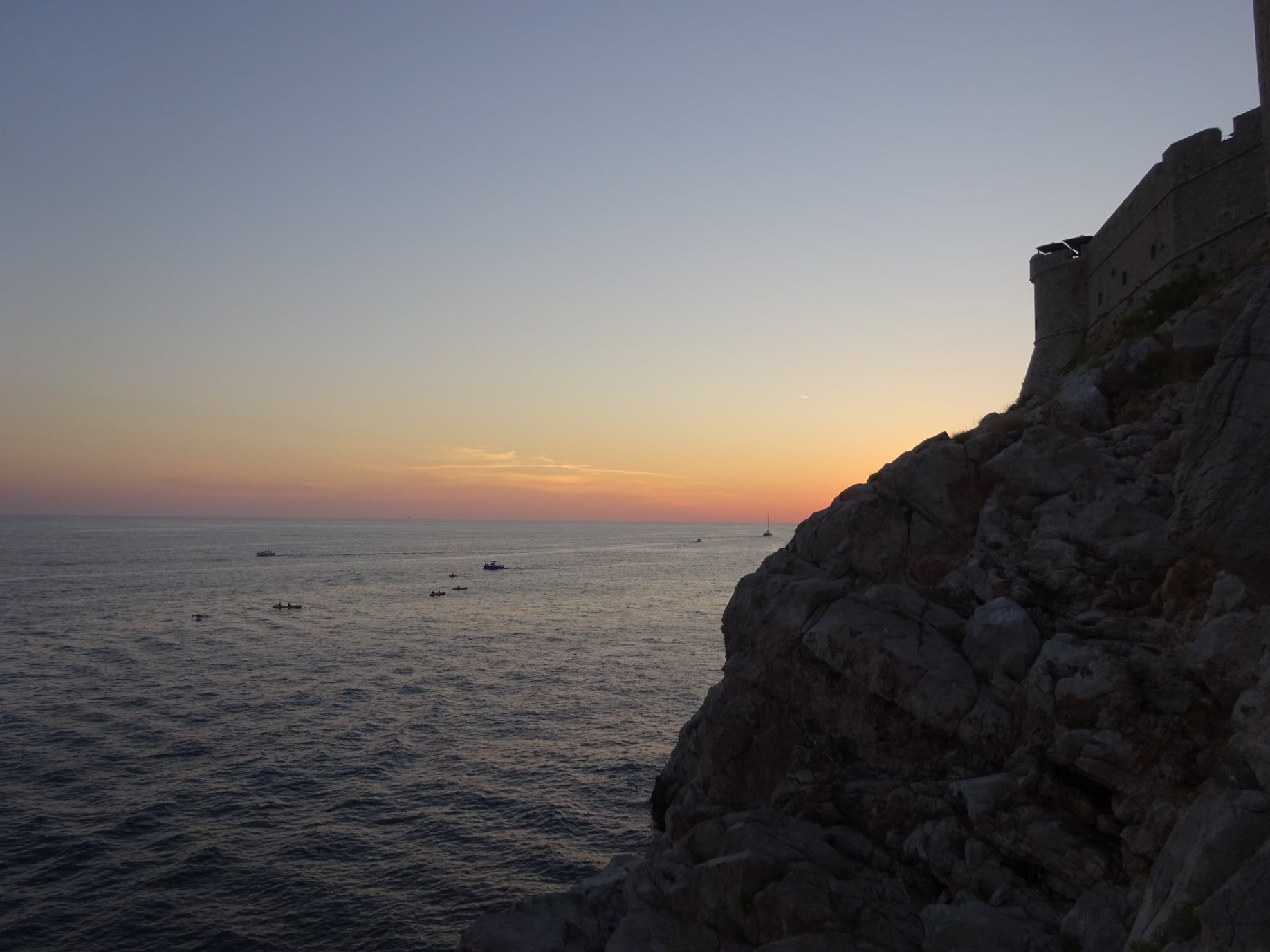 On my last day I was killing time in the old town a bit to be honest, although the Serbian Orthodox Church was an interesting alternative to the Catholic Churches that dominate and is a great photo opportunity.

The Red History Museum is in the New Harbour Area, and had I not been staying nearby may have missed it all together which would have been a travesty. It has only been open two years. The curator spent a year in Belgrade sourcing the items and paraphenalia for the displays, which range from a checkpoint to vinyl records and authentic dsiplays of what houses looked like (kitchens, bedrooms and lounges)  during the communist era. It also innovatively and entertainingly tells the history of Communism in Croatia from the 1950s to its’ eventual fall in 1990. 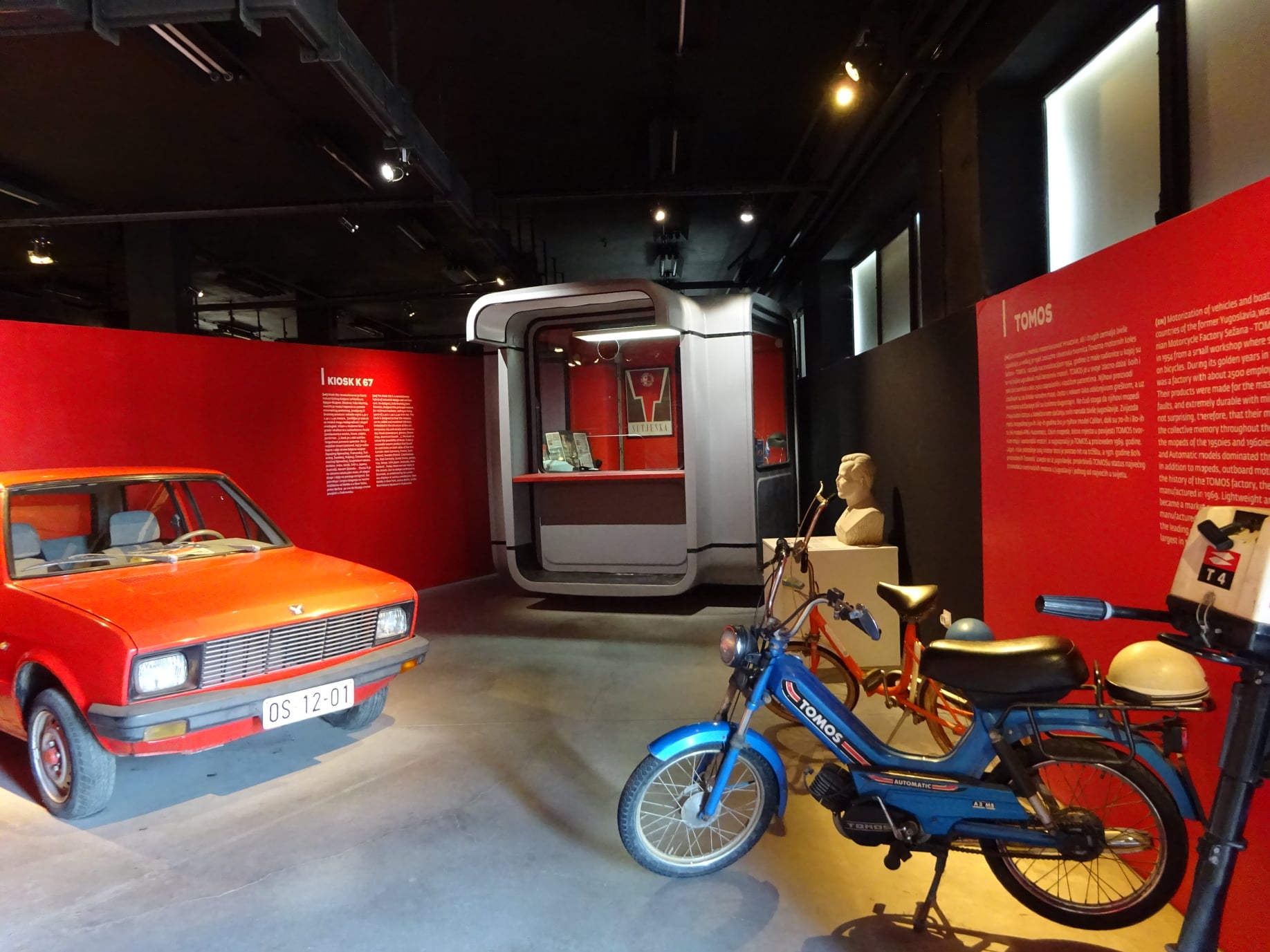 And that, sadly, was all she wrote. I was very sad to leave and promised myself I’d be back at some point. It was brilliant to be back on the road again and Dubrovnik surpassed my expectations. Everything was there – the climate, varied and numerous things to do, friendly people, and all reasonably priced.

Eat at: I am going to say Bon Appetit in the New Harbour Area – great pizzas and generously portioned traveller friendly offerings of burritos, sandwiches and pasta.

Drink at: My pick of the old town’s numerous options is the Dubrovnik Beer Factory – excellent selection of beers, shaded courtyard and in the shadow of a church. Good music too.

Stay in: The New Harbour Area is a good option as rates are cheaper than the old town which is just a short bus ride away. There is a good selection local restaurants and it is close to the bus station and ferry port.