Dublin is the home and birthplace of the great beer Guinness, but surely that’s not the best part of it. When I first arrived in Dublin, I was greeted by an extremely nice customs agent who welcomed me to Ireland, and wished me happy travels. I walked outside of the airport and picked up a Taxi to my hotel – which the cab driver had never heard of before (I was a bit scared at that point) when I arrived at my Hotel which was called The River House Hotel it’s a small 33 room family owned hotel. The room keys were a bit weird, as you had to leave them with the receptionist when you left the room. Luckily for me, the reception was 24 hours. Back to the beautiful city of Dublin – I spent most of my mornings/ afternoons exploring the town, and just walking around meeting people. Like most places in the summer Dublin is full of tourists and others just looking to have a good time.

One thing I noticed is that Irish people are very patriotic, they are very proud of their country they sport their colours, and are constantly wearing t-shirts/jerseys with some sort of Ireland symbol on it. Irish people are very friendly to foreigners, as many times I got lost and had to ask for directions and they were so obliging. One thing you should watch for though is people asking for money. They will give you some story about having no place to live. They will start with $5 and it will go up and up. It’s ok to give a few bucks here and there, but don’t get scammed (I did).

Dublin was exactly how I imagined (as I’ve never been there before, prior to this trip) the main road is separated by a river, which was stunning, the streets are very crowded and people are (sometimes) drunk in the morning, afternoon and especially at night. One thing I did notice a lot is that in Dublin specifically there are a lot of different cultures and nationalities either living there or visiting. The streets are full of vendors, local musicians, and talents. You will always see something different and interesting. The shopping is pretty good too, tons of gift shops, and malls. You can leave with a ton of Irish memorabilia. The restaurants were everywhere – and there are many shops you can get really good food in too.

You will never be bored if you go to Dublin as whenever you go you will meet or see someone extremely interesting and funny. I would live in this city for the rest of my life if I could, it’s truly amazing.

Like most major cities there is an entertainment district, Dublin is no different. They refer to that part as “Temple Bar” (and yes, there is an actual bar in Temple Bar, called The Temple Bar) this is an area where you can go and let loose. Everyone is having fun, drinking, socializing, meeting new people, you name it. Since Temple Bar is actually one of the biggest tourist areas in Dublin you will meet a ton of foreigners, it’s actually quite hard to meet an Irish local at night (other than the bar workers) in that area as they know it’s very touristy and tend to stay away. During my 3 day stay in Dublin, I met Canadians, Americans, British, French, Brazilian, Dutch, Sweds, Polish and that’s just to name a few. It’s
an absolutely amazing place to go. The people you meet you will never forget. 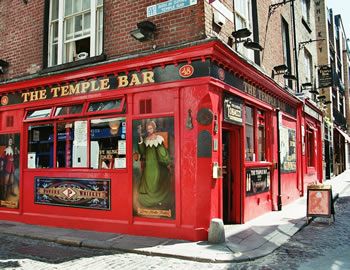 If you’re looking to party and have a really good time, make sure you check this place out in One thing you must do though while you are in Temple Bar is DRINK A PINT OF GUINNESS. I’m from Canada, and I have to say the Guinness in Ireland is much better than it is in Canada, or any other
country I would imagine.

Wait, what? Yes the title is right. There is a bar in Temple Bar area called The Temple Bar. This bar is the main attraction as it’s widely known to many, and has a really good reputation. I walked into this bar my first night in Ireland, and I met a ton of people. It’s a bar that’s absolutely rammed, jammed, and everyone is having an amazing time. Whether you’re into dancing, or just sitting and drinking a few pints, you will find travelers doing the exact same thing you are. Everybody is there for a good time, and while I was there – I did not see any fights, or even arguments. It was phenomenal. This bar pours the best Guinness and is relatively cheap for a tourist bar. The Irish people in the bar are all so nice and friendly, especially if you’re not from Europe. You must go to this bar at least once if you’re staying in Dublin. You will have the time of your life.

Budget: Dublin is not cheap, a pint of Guinness will set you back around 5-6 Euros. Hostels start at around 20 Euros per night.

Time to go: Anytime! Summer months are the best (and busiest). During the Six Nations Rugby in the spring it is particularly vibrant.